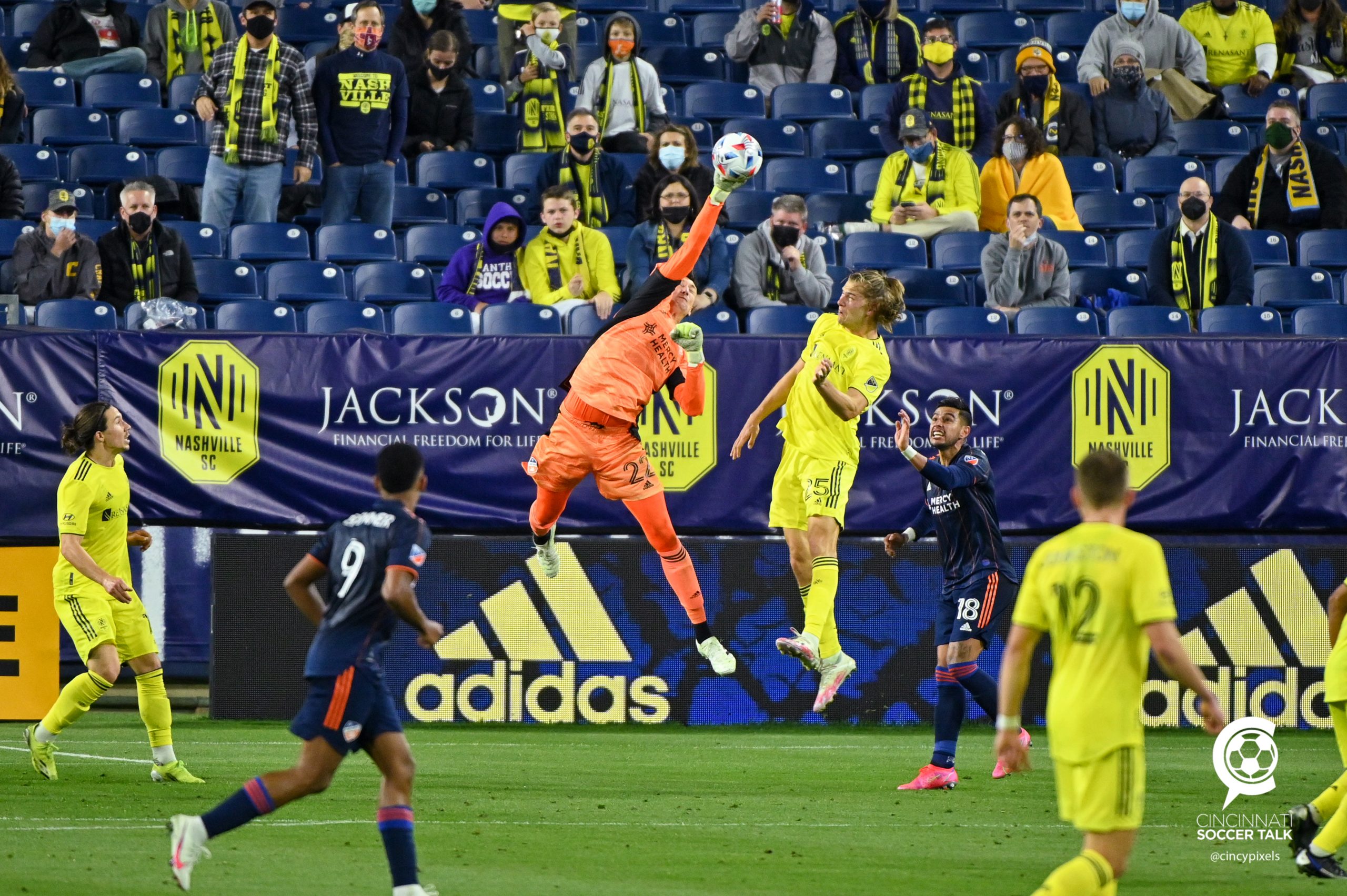 FC Cincinnati escaped Nissan Stadium with a 2-2 draw Saturday against Nashville SC after leading 2-0 in the first 12 minutes.

NASHVILLE, Tenn. – It was Music City mayhem at times in front of FC Cincinnati’s goal on Saturday night at Nissan Stadium. But in the end, Nashville SC and the Orange and Blue did what they’ve done since their USL days – share the points.

A hard-fought 2-2 draw on the road wouldn’t normally be thought of as a bad result. The fact that it came after grabbing a two-goal lead in the first 12 minutes and that in the end it was less of a draw and more of an escape, is a concern.

But if Saturday’s reunion with an old USL rival can be considered a first step, it was a step forward.

“We needed to fight for a point and that’s what we did,” FC Cincinnati coach Jaap Stam said. “The mentality in the team was there. Everybody was working very hard. Everybody put in a shift. We saw some good football from ourselves. We also were playing a very difficult opponent.”

The final whistle after five minutes of stoppage time brought a collective sigh of relief for everyone in Orange and Blue. Nashville was so relentless in its attack it just felt like if a winner was coming, it was going to come from a player in black and yellow.

It’s a credit to FCC’s resilience that a third goal didn’t come for either side. It’s also a credit to Przemyslaw Tyton, who withstood 32 shots, including 13 on target. He had 11 saves on the night.

The clubs met four times in 2018, with three draws and one match won by FC Cincinnati on penalty kicks. Saturday was the first MLS meeting between the two clubs.

Saturday’s match didn’t seem destined for a draw in the first 15 minutes, when FCC came out blazing.

Ronald Matarrita fed Lucho Acosta, who stayed onside and neatly tucked away his first goal for the Orange and Blue to make the score 1-0 eight minutes into the match.

Despite pleas for offsides from the hometown fans, the goal stood.

“The goal is important,” Acosta said via interpreter Anwar Chagollan. “It’s nice to score the first goal. What I took from this match is the sacrifice the team made in this match.”

Two minutes later, Brenner nearly took the ball off Nashville keeper Joe Willis and got taken in the box.

Play continued, but replay later awarded the penalty and Brenner made it 2-0.

“Brenner is a great player,” Acosta said. “I’m happy for him that he scored his first MLS goal. He’s going to be an important player for us this season.”

Nashville pulled one back in the 20th minute when Jhonder Cadiz scored from close range off a cross from Randall Leal.

A lunging save followed a comfortable catch and punch to deny Nashville an equalizer. He later had a kick save at the near post as Nashville began to make inroads in FCC’s final third.

Halftime mercifully arrived for FCC with the one-goal lead intact but with adjustments needed for the Orange and Blue after Nashville had six shots on goal in the half to just two for FCC.

But the pressure was persistent from Nashville. And they got a moment of quality from Neal to equalize in the 64th minute.

FCC cleared a corner, but only as far as Leal, who gathered and delivered a strike from the edge of the box that snuck into the top left corner just out of the reach of Tyton and took a carom on the way in.

“Jurgen Locadia cleared the corner, but not too strong,” Tyton said. “We need to attack the ball faster and more aggressive. I was close to save it. It was a great shot.”

Locadia, who was kept out of the starting XI due to a thigh issue, came on in the 61st minute, replacing Calvin Harris, who made his MLS debut.

“He’s a very young player with a lot of qualities to improve,” Stam said of Harris. “He’s shown in preseason he can use his pace to open things up and go forward. This was not an easy game for him. We’re very happy with Calvin.”

After allowing an MLS record number of goals in their inaugural season, FCC managed seven clean sheets last season, including four scoreless draws. Most of the focus during this transfer window was in the midfield and the attack. It’s just one match, but FCC had no answer for Nashville’s onslaught on Saturday.

“They’ve got quality,” Stam said. “They’ve got technically strong players, quick players as well. They are a side that is dangerous. We want to go forward as quickly as possible. But we were giving balls away. We need to manage that situation better.”