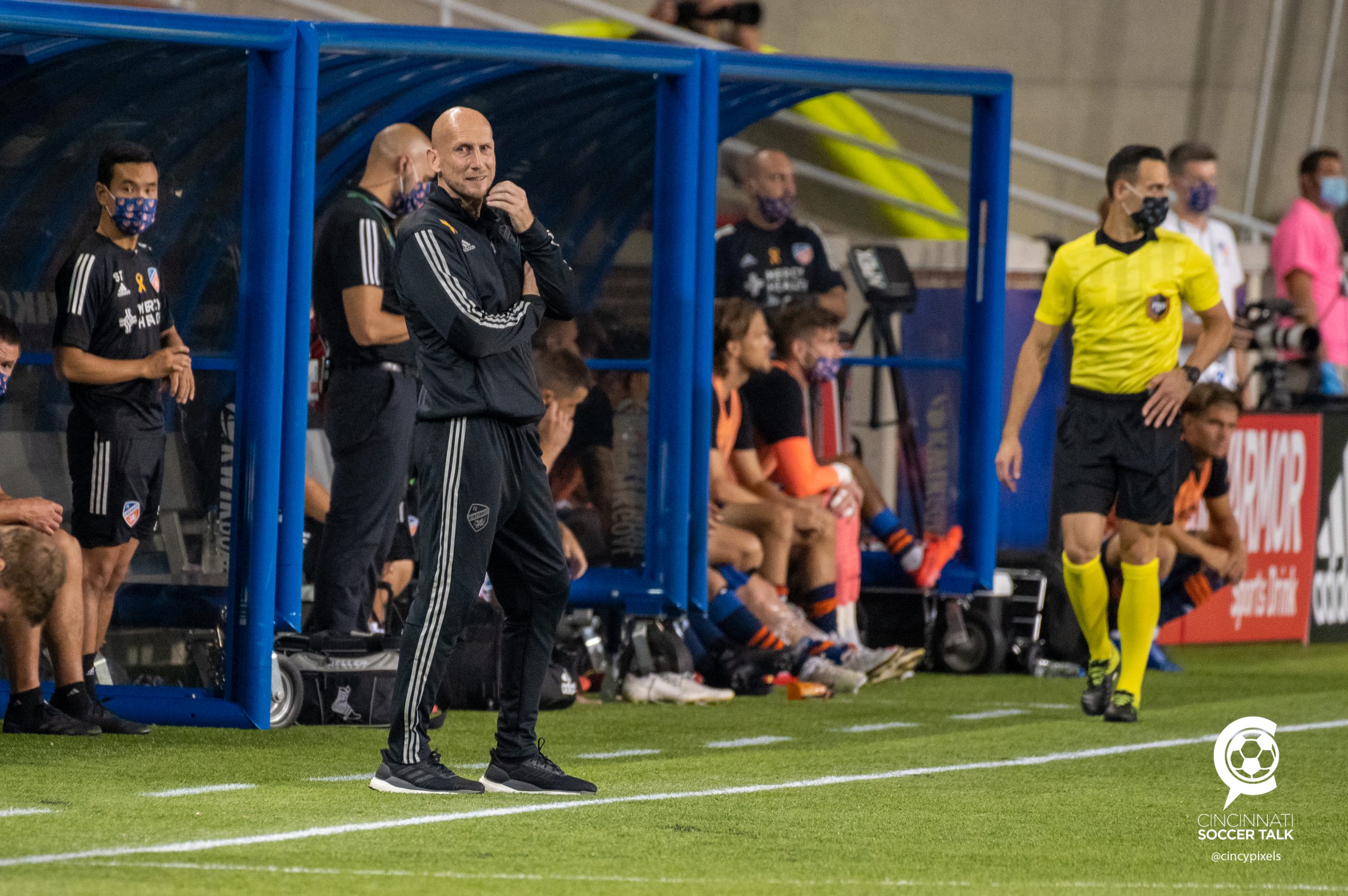 FC Cincinnati coach Jaap Stam used two sets of players, for 60 and 30 minutes respectively, in a 2-1 preseason victory Saturday over the Chicago Fire in Orlando, Florida.

It felt like the longest of off-seasons, but FC Cincinnati finally graced monitors and screens in 2021 in the form of a 2-1 preseason win Saturday in Orlando, Florida, over Chicago Fire FC.

While the results from the previous two games versus USL talent presented mixed results, this was FCC’s first real challenge against an MLS squad in coach Jaap Stam’s first preseason as manager.

The team was primarily composed of a 60-minute squad and a 30-minute squad, while Chicago opted to make periodic substitutions throughout the second half. Conspicuously absent was Jurgen Locadia, who according to the broadcast had was out with a small knock. Allan Cruz and Ronald Matarrita were also out on international duty for the Costa Rican national team.

The first half of the match started much the same way the 2020 season ended. While Brenner and Franko Kovacevic managed some shots on goal, both were easily gathered by Chicago goalkeeper Bobby Shuttleworth. The Chicago side had more of the possession early and fought to squeeze out of FCC’s presses.

Chicago’s counter managed to shake up FCC’s backline, with Ignacio Aliseda and Robert Beric pushing the edges. In the 15th minute, Aliseda crossed a screen into the box, and the deflection popped out to Boris Sekulić, who beat Przemyslaw Tyton on his left for a 1-0 lead.

The defense kept Chicago off the score sheet for the rest of the half, and the hydration break recharged the FCC offense. In the 35th minute, Kamohelo Mokotjo fed a pass past the back line to Luciano Acosta, who cut back across the box and beat Shuttleworth with a left-footed curler to knot the game at 1-1.

The second half started with a handful of Chicago substitutes, but Stam opted to replace only Acosta for trialist Kyle Scott at halftime. With the injection of a full squad at the 60th minute, the team appeared to gel, particularly with Scott playing a leading role. Goalkeeper Ben Lundt kept the game tied with a stellar save in the 69th minute.

FCC finally broke through in the 78th minute with Brandon Vasquez producing a cross to Calvin Harris in the box. While Harris and Ben Mines couldn’t control the ball, Chicago’s defense could not either, and Harris tapped the ball into the net for a score. While the play was first ruled offside, referee Guido Gonzalez Jr. overruled the call and gave the goal to put FCC up 2-1.

Much of the rest of the game involved possession battles and a small shake-up between teams, but FCC came through their first big test of the preseason with a 2-1 victory. While this game doesn’t produce points in any standings, this was a solid win for an FC Cincinnati team that had found it difficult to come back from a deficit during its short MLS history.

FC Cincinnati’s next preseason test comes on Wednesday against Orlando City SC. The Florida preseason slate ends Saturday in a match against Minnesota United FC. Both are scheduled to be unscreened games.