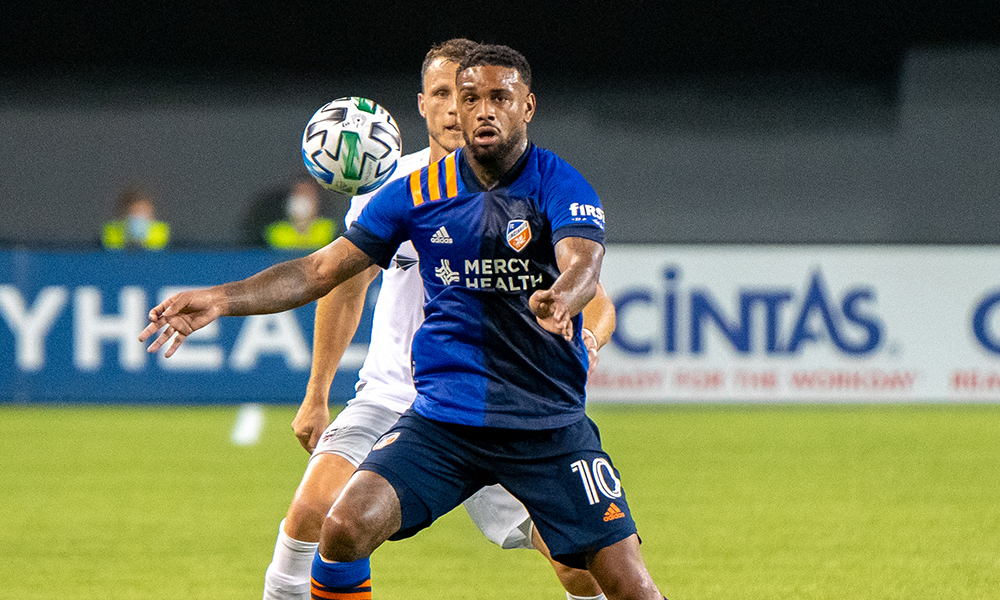 It’s still early in FC Cincinnati’s preseason, but so far Jürgen Locadia has teamed well with new additions Brenner and Luciano Acosta. Locadia’s future with the club will be decided in the next few months.

Jurgen Locadia is in tune with the speculation surrounding his future with FC Cincinnati, but for now, he is focused on adapting to what could be a new role on an ever-changing roster.

“I saw the rumors about me leaving the club,” Locadia said Friday via videoconference with reporters. “All I can do is focus on the club where I’m at, which is Cincinnati. Whatever happens in the future, happens. For now, I feel good here.”

Locadia’s loan from Premier League side Brighton & Hove Albion expires on June 30, meaning he could have less than two months of regular-season soccer left in Orange and Blue. Should FCC choose to exercise their permanent transfer option, Locadia’s MLS contract would run through 2023.

Last season, Locadia managed just one goal in 17 appearances, including 15 starts, with an xG (expected goals) of 5.52. This is the same Locadia who has scored a career 98 goals with 44 assists in 276 appearances across all competitions.

But during a frustrating and abbreviated 23-match schedule last season, FCC managed to score an MLS-worst 12 goals. Locadia wasn’t the only player in Orange and Blue last year to struggle find his confidence or quality service.

But this campaign could be different, with the arrival of Brazilian striker Brenner and a proven No. 10 in Luciano Acosta. It’s early in preseason, but the initial returns with Locadia, Brenner and Acosta playing together have been positive.

In last week’s win (score not reported) over USL Championship side Indy Eleven, Locadia returned to the left wing, a position he played previously in Holland. Brenner was up top, with Alvaro Barreal on the right.

Locadia, who did not play in the preseason opener against Louisville City FC, said there were several quality chances created with Acosta heavily involved.

“He played on the left wing before, and I knew that as well,” said coach Jaap Stam of Locadia via videoconference on Friday. “There was a lot of good movement and creativity to go forward. In that particular game, it worked out well. Of course, it’s just a friendly as these all are, but we need that same intensity going forward.”

The next preseason test comes on Saturday when FCC faces Chicago Fire FC at 11:30 a.m. on Saturday. The match will be streamed live at fccincinnati.com.

Locadia praised the club for the acquisitions of Brenner and Acosta and said his initial impressions of the pair has been good.

“It’s a good job from the Cincinnati side to sign players like Brenner and Acosta,” Locadia said. “I don’t see them as competition. The system we play right now with three attacking players, Acosta is a key player with the speed up front we have. Brenner’s finishing is pretty good, left and right. He’s good on the ball, fast. He’s really dynamic. Me coming on the left is not new to me. It’s fun to play as a winger.”

Stam said the club is focused on playing a 4-3-3 formation with some tweaks here and there. He also mentioned Calvin Harris and Ben Mines as players who could play on the right. Stam also praised trialist Kyle Scott’s approach to camp so far.

But a big focus in preseason is to see how Locadia, Brenner, and Acosta can co-exist on the pitch — and for how long.

“It’s always good for a team to be able to play different formations,” Stam said. “We’re focusing our time on one system. For us we’re mainly focusing on the 4-3-3. We’re planning to build up in the games the amount of minutes for each player, and gradually working to our first 11. We want to see things evolve and make progress.”

Stam added there have been no significant injuries in preseason to this point. And while the team is adapting to the climate and playing surfaces in Orlando much like last year, this year’s trip to the Sunshine State is in stark contrast to the controlled chaos of 2020.

“The big difference is we have a proper preseason to prepare for this season,” Stam said. “Everyone was eager to start. Last year we only had two weeks. After a week and a half we had to start the season. Hardly had time to work on one’s shape or work on what you need to build. There was no time.”