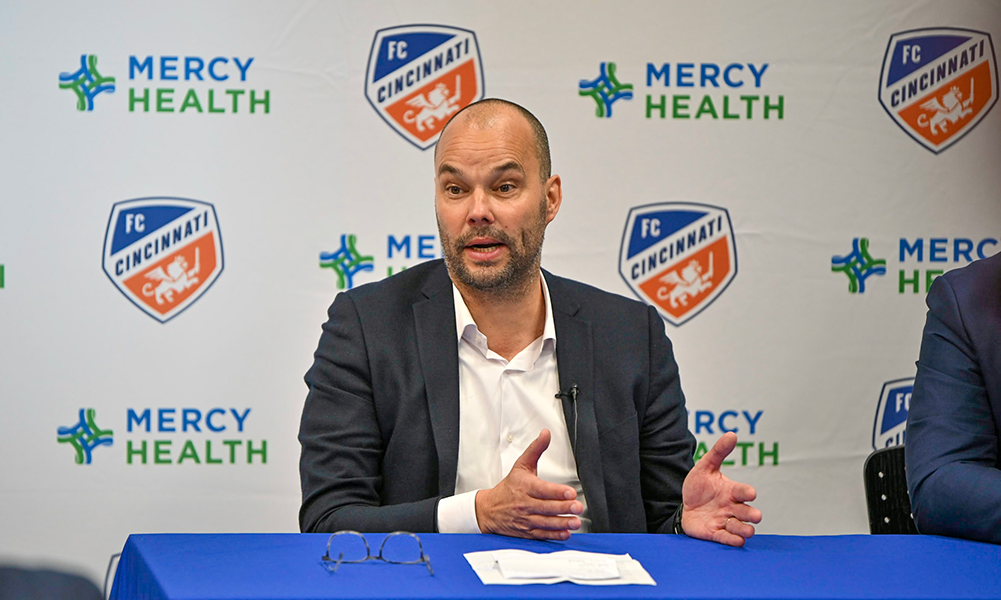 After a month of reports, FC Cincinnati lands their No. 10 in Luciano Acosta after agreeing to deals with D.C. United and Atlas FC.

FC Cincinnati entered this preseason with a list of positions and player profiles it sorely needed. At the top of the list, perhaps in bold sharpie and highlighted, was a No. 10.

FCC had a glaring hole in the midfield last season. They badly needed a creative player who could score goals himself but also with the ability to deliver primary or secondary assists to the forwards.

From the start, Luciano Acosta topped FCC’s list of prospective No. 10s. Officially on Wednesday, that box got checked as complete.

As FCC general manager Gerard Nijkamp pointed out on a Zoom call with media members on Wednesday, Acosta always was the man they wanted.

While Nijkamp’s preference was to get the deal done prior to the start of preseason, there were some complexities which caused things to drag out a little longer. Most notable was that two teams were involved — United, which owned his MLS rights, and his current club, Liga MX side Atlas FC.

“Difficult to get over the finish line,” Nijkamp said. “He was long time on our radar. Going into the offseason, knowing we had needs at the 10 position. We had a list of players we liked. Lucho was already on our list. It was complicated. That was something to solve.”

Acosta, 26. will be a Designated Player via his transfer from Atlas. FCC acquired his MLS priority rights from United in exchange for $250,000 in General Allocation Money (GAM) plus the potential for future GAM based on incentives. He signed a three-year contract with an additional option year.

“We’ve added a proven MLS talent,” said Nijkamp. “He has showed in this league that he can score goals and deliver assists. He will create balance to midfield. Create rhythm in the midfield to slow down and speed up. That’s the reason he was already high on our list from the start of the preseason. We are convinced he will be a great added value.”

Aside from his obvious attributes on the pitch, Nijkamp said Acosta’s familiarity with MLS also is a major boost for an FCC roster that features a lot of young and international players who aren’t as adapted to the MLS travel and climate.

“Last year showed how challenging adapting to MLS can be,” Nijkamp said. “It takes time to fully adjust.”

That should be no issue for Acosta who scored 24 goals with 35 assists in 126 regular-season appearances in MLS. He only spent one season away from the league after spending four seasons in D.C.

The Buenos Aires, Argentina, native has amassed 230 career appearances, including 164 starts, scoring 32 goals and adding 38 assists, across all competitions in eight professional seasons.

Working in tandem with Rooney, Acosta finished the 2018 season as an MLS Best XI selection, with 10 goals and 17 assists – second most among all MLS players – in 33 MLS regular season appearances.

Following the 2019 MLS season, Acosta moved to a new league for the second time in his career when he joined Atlas. Since January 2020, Acosta made 33 appearances, including 27 starts, scoring three goals and adding two assists across all competitions.

So, the Orange and Blue got their man, someone to link up with Brenner, Jurgen Locadia, and Yuya Kubo.

But Nijkamp said he’s not done checking boxes. He still wants a central defender and a winger that fits a different profile from what they already have on the roster.

“A winger who can run off the ball, using his space first before receiving the ball,” he said. “Don’t want to say there’s a lack now because Calvin Harris can do it, but we need more that can do it. More with speed and pace.”

Nijkamp said they’ll be patient with these remaining pieces, intent on finding the right player. If they can’t, the club might wait until summer when the available options might be more plentiful.

It was obvious in Nijkamp’s words that the Acosta deal was the most critical deal to get done, the one what connects the pieces of the roster puzzle together for Jaap Stam.

Acosta was on the pitch training at Mercy Health Training Center on Wednesday. It is possible he could play in Friday’s preseason match against USL Championship side Indy Eleven.

“The 10 position was the missing link,” Nijkamp said. “We need to add more pieces. But this is a big boost.”