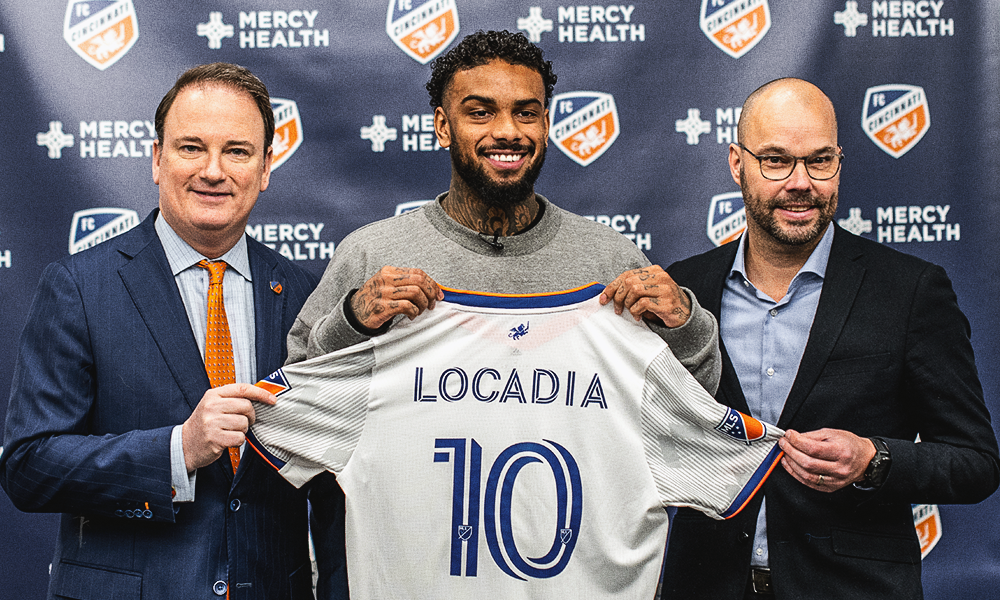 Jürgen Locadia, the crown jewel of the 2020 winter transfer window and the supposed savior of FC Cincinnati, could be on his way out of MLS should rumors prove true. Bryan Weigel examines his production while with the club.

Jürgen Locadia, the crown jewel of the 2020 winter transfer window and the supposed savior of FC Cincinnati, could be on his way out of MLS should rumors prove true. Nearly one year after reports surfaced that the Dutch striker from Brighton & Hove Albion was to be loaned to FCC, Locadia has been linked to a move to Maccabi Tel Aviv.

Social media reactions have been mixed, with many supporters hoping Locadia stays, while numerous others are happy to have a designated player spot open up.

My question is, should FC Cincinnati fans want him to go?

At first glance, you see a winger/striker that has had spells in the Eredivisie, Bundesliga and the Premier League. His star has shone bright and has even led to appearances at national team camps with his native Netherlands.

This was the striker that drew hundreds of fans to CVG airport to welcome him — to the consternation of club employees. We heaped our hopes and dreams on him.

The footballer-turned-DJ is an international celebrity, and you really felt if given the opportunity and talent around him, he could have become one of the most charismatic faces of the league. His personality makes you want to love him, and his work rate on the pitch is something many in Cincinnati love.

But after looking past the surface you see a player that does not have a “true” position. Locadia spent only one full season as PSV Eindhoven’s striker, but over the next five-plus seasons rotated between center forward, right and left wing.

His professional numbers, while respectable (74 career senior-level goals among 249 appearances), is not quite elite-level production required of a striker at his value. Locadia averaged a goal roughly every 182 minutes outside of MLS or in about once every 3.2 games in a per appearance metric. The hope by general manager Gerard Nijkamp and the Cincinnati faithful was that playing against inferior competition could lead to a desired goal rate.

The striker woefully underperformed, scoring twice among all MLS competitions in 2020. Many will blame his lack of chances (2.89 per game) due to a lack of service, but you can also highlight numerous point-blank misses in league play (4.94 XG in 18 games vs. one goal scored in those regular-season matches).

As I mentioned above, Locadia didn’t have consistent service, and that likely diminished his output. Attacking midfielder Siem de Jong was a non-factor, and other DP’s Yuya Kubo and Allan Cruz could not stay on the field and were inconsistent. My assumption is that with a quality playmaker and better service from Alvaro Barreal, Kubo and others could help drive up his production.

But does a player who averaged a goal every 2 ⅓ games and yet barely found the back of the net in 2020 deserve an $8 million transfer fee or continuation of loan? 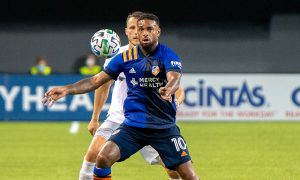 Photo Credit: Jeremy Miller/Locadia only scored two goals for FC Cincinnati after arriving on loan from Brighton & Hove Albion in the Premier League.

In comparison, we will look at other recent high-profile DPs Gonzalo Higuain, Carlos Vela, Chicharito Hernandez and Alan Pulido via Wyscout. All are high-profile attacking players who boast amazing resumes prior to MLS.

Higuain (one goal in nine matches) and Hernandez (two goals in 12 matches) both struggled mightily in 2020, while Vela (four goals in seven matches) and Pulido (seven goals in 14 matches) impressed in injury-shortened seasons.

All four attacking players had a better roster to work with than Locadia. Yet, not all of them had a far and away better XG per 90. Locadia (.30), Hernandez (.28) and Pulido (.33) were all similar, while Higuain (.40) and Vela (.60) stood out. The finishing by Locadia was clearly off, but so was Hernandez and Higuain.

The standard seems to be Vela when comparing high-profile players, and his 14 goals in the first season of MLS were off his 34-goal mark in 2018. Last season was a challenging season for some of the best players, and it’s not always a guarantee they perform in their first season in the league.

Locadia could have made his impact better when playing off the wings but failed to log an assist. Vela notched 10 assists in each of his first two seasons. In 2020 Locadia’s XA (expected assists) was .6, whereas Vela and Pulido had two assists each in fewer matches. Locadia likes to run at goal when he receives the ball wide or will even take a booming shot from distance — not something you always want to see from your best player.

But it’s not all about assists and goals right? Well, Locadia also underperformed most of the other four in many areas. He had 2.83 successful attacking actions per 90 vs. 4.83 for Pulido, 8.4 for Vela and 3.7 for Higuain.

His crossing percentage equaled Higuain at 16.67% but trailed the others who were all over 33%. Many other passing stats were within averages, but none ever stood out as exceptional.

But it is about the shots! Locadia’s percentage of shots on target is not surprising. The “goal scorer” for FCC only put 29.8% of his shots on target. This is damning when compared to the others. Higuain was next at 35.3%, but Hernandez’s 41.7%, Vela’s 46.2% and Pulido’s whopping 60.9% trump Locadia. How is a star-striker missing the frame so much?

This exercise in comparison left me defeated. I want to root for Locadia. I want him to be the next or even better Josef Martinez, but he couldn’t get it done in 2020.

Do I think having a better supporting cast will help him? Yes. Locadia still had nearly 5 XG in 17 regular-season matches, and if he didn’t have to shift to the wing or drop back in possession, he could have maybe had even better runs or chances in the penalty area.

Do I think FCC should do everything it can to fend off others’ interest in Locadia? No. He hasn’t shown me that he can be worth the level of those other players he was compared to. This is an ownership that is not afraid to make a player wearing Orange & Blue the richest in the league. In this market, spend that $8-10 million on another forward and/or a needed playmaker who has a better track record or higher ceiling.

What if there is a lockout and he only plays one month? Does FC Cincinnati pay him? Well, that depends if he gets help. Nothing has shown me that he can be the key in making a group of players exceptional. He seems reliant on a good pass or will just take the ball himself on goal.

As I said, I want to like Locadia. I want Nijkamp to look like an absolute genius. I just don’t see it off his results from last year. Maybe if he was in Cincinnati training now like many of the other players or if he even had a better goals-per-game track record.

But face it. He’s not THE goal scorer. I will not fault FC Cincinnati should it let Locadia leave if there is a lockout or if he doesn’t show extremely well in April and May. It looks like a great idea that just didn’t pan out.

I am sure he hoped for more and that his time in the United States could have led to more success on and off the pitch. The situation with COVID-19 I am sure didn’t make this an easy move and who knows what his mindset was like.

I will forever root for Locadia because he took a chance coming to FC Cincinnati. And heck, if he is still here, my support won’t waiver while he is on the pitch.

He is a fun follow on social media and has said and done most of the right things while in MLS. But it’s time to demand better, and if he can’t back up his wage and fee now or in five months, I think it’s OK to say, Ciao Locadia.