Chris Asbrock breaks down the start of the MLS playoffs, league awards and big-name rumors.

The 2020 MLS regular season has been one that nobody will forget. The league did a pretty good job of navigating the COVID-19 pandemic minefield and finished the regular season with few problems. Throughout the season, the Eastern Conference proved to be the dominant conference. The top four teams in the east each finished with more points than the top team in the west. The Eastern Conference is very top-heavy, while the Western Conference was more balanced. The Philadelphia Union took the Supporters Shield, amassing 47 points in 23 games played. Diego Rossi of Los Angeles FC finished the regular season as the leading goal scorer with 14. There were three players who tied for second, with 12 goals. Gyasi Zardes, Raul Ruidiaz and Robert Beric all were just behind Rossi. LAFC was the top-scoring team, scoring 47 goals.

Finalists for the year-end awards have been set. The big award, the Landon Donovan MLS Most Valuable Player Finalists are as follows: Andre Blake (Philadelphia Union), Nicolás Lodeiro (Seattle Sounders), Jordan Morris (Seattle Sounders), Alejandro Pozuelo (Toronto FC) and Rossi. Blake also won Goalkeeper of the Year, announced by the league on Monday. The other awards will be announced soon. On the roster side of things, teams had to make some decisions in terms of contracts, and one of the bigger names in the league, CJ Sapong, is moving on from the Chicago Fire. Sapong just completed his 10th season in MLS and is now out of contract and is free to go wherever. As clubs are continuing to deal with roster decisions, another major name is being linked to MLS. Reports are that David Beckham is wanting to bring in his former Real Madrid teammate, Sergio Ramos to Inter Miami. Ramos will be out of contract this summer, so Beckham is looking to bring in the Real Madrid captain.

With the regular season coming to an end, the time has come for the MLS playoffs. With 2020 being such a crazy year, MLS joined the fray and for the first time, MLS fans are seeing two play-in games in the Eastern Conference. With the imbalance of the conferences, MLS adjusted its playoff schedule and the play-in round was born. The first matchup is the 7-10 game, where the two newest MLS clubs face off as 7th seeded Nashville SC meets fellow expansion side Inter Miami CF, seeded 10th. The two teams have faced off twice this season. Nashville SC took the first game 1-0 in Nashville, but the two sides played to a 0-0 draw in Fort Lauderdale in the second game. Nashville SC comes into this game as the favorite to advance, and with the international friendlies causing some key pieces to be gone for both sides, hosting the game will give Nashville a bit of an advantage, despite having Inter Miami having two of the bigger names in the league.

The other play-in game sees the 8th seed New England Revolution host the 9th seed Montreal Impact. These two teams have faced off four times this season, with New England winning three. The Impact won the first game back in February, 2-1 at home in Montreal. The final three games saw the Revolution come out on top, outscoring the Impact 7-3 in those games. The Revolution are heavy favorites coming into this game, and this game should play out the same as the last three, with the Revolution coming out on top.

This season has been so different and difficult that it makes the playoffs seem difficult to predict. In total, there are only a few matchups that will catch your eye. Out west, the defending MLS Cup champion Seattle Sounders hosting LAFC is the one can’t-miss game. Columbus hosting the New York Red Bulls is another game, that on name alone, is one to certainly watch. As previously mentioned, the Philadelphia Union were the best team in the league, and getting to face the lower-seeded team from the two play-in games could have its benefits. The Union conceded the fewest goals in the league (20) while scoring the third most goals (44) in MLS. That recipe should bode well for the Union as they look to capitalize on their strong team and make the march towards the MLS Cup.

Below is the schedule for MLS clubs in action this week. 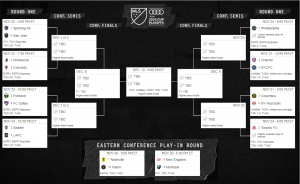 As always, stay tuned to Cincinnati Soccer Talk as we take a look at the upcoming offseason for FC Cincinnati as it heads to the crucial 2021 season.