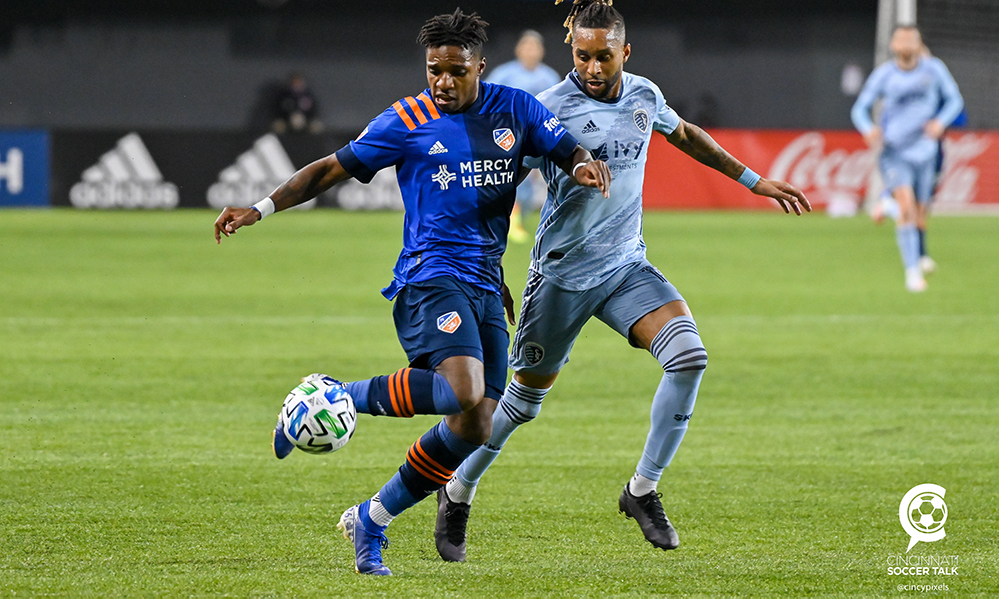 Joseph-Claude Gyau scored his first goal of the season on Sunday, but it wasn’t enough as FC Cincinnati fell 2-1 at Inter Miami CF to end its 2020 season.

FC Cincinnati’s long, unique — and at times ugly — 2020 season is finally, mercifully, over.

Joseph-Claude Gyau scored his first goal of the season to spark a second-half comeback attempt aided by a man advantage in the final minutes, but the Orange and Blue could not climb back from a two-goal deficit, ending their sophomore MLS campaign with a 2-1 loss at Inter Miami CF on Sunday in the middle of Tropical Storm Eta.

“Visibility was low,” Gyau said via conference call. “The wind was crazy. The rain — sometimes on the pitch I was surprised we were even playing the game.”

For the second straight season, the club has set an MLS record for futility. Its 12 goals in 23 matches, an average of 0.52 goals per game, is a new league low, breaking D.C. United’s mark of 0.65 in 2013. It of course also shattered the record for fewest total goals in a single season, but that will surely come with an asterisk with the COVID-19 pandemic disrupting the league schedule. The previous mark there was 21 by D.C. United in 2010.

FC Cincinnati (4-15-4) ends its season with 16 points, last again in all of MLS. With the result and some help in other matches, Miami (7-13-3) qualifies for the playoffs in its first season, finishing 10th with 24 points.

Stam and general manager Gerard Nijkamp will have a press conference Monday to look back at the 2020 season and ahead to 2021. Stam has indicated he has already made his end-of-year evaluations, and exit physicals will be on Tuesday.

“We need to do something, to make changes, and hopefully by succeeding in doing that we can go forward and fill in the positions that we think we need and get better and better results,” Stam said via conference call.

Said Gyau, “I’m definitely looking forward to getting a break mentally. Not only for us but for everybody it’s been a crazy year with all the stuff that’s happened in 2020. But at the same time there’s a lot of things that we can reflect on and try to do better next year. There’s also a lot of positives we can take away from this year and bring in to next season. It’s just trying to take the good with the bad.”

FC Cincinnati’s first twist in 2020 came less than a month after players reported when then-coach Ron Jans stepped away and ultimately resigned after the club learned he had used a racial slur.

For the second year in a row, a coaching search began, and then COVID-19 halted play in March after two matches. Upon restarting in the MLS is Back Tournament in Orlando, Florida, under Stam, things looked promising as the Orange and Blue reached the knockout stage.

But when in-market play kicked in, the momentum did not continue, and the club struggled to score, with three different runs of at least 300 minutes without a goal.

The third streak hit 360 minutes — six hours exactly — on Sunday, ending in the 66th minute when Gyau cut inside and launched one in the upper left corner of goal, leaving Miami keeper John McCarthy flat-footed.

“It was a long time coming,” Gyau said of his goal. “It’s all good, but it was still bitter the way it ended.

“I felt I was a bit unlucky (this season), as well as everybody. … We wanted to shoot more in the second half because we were going with the wind. It’s all about trying to get in good spots, trying to find spots where you can be dangerous.”

FC Cincinnati nearly equalized in the 86th minute on a Nick Hagglund header off a Haris Medunjanin free kick. But McCarthy was there for the save. He saved three of the Orange and Blue’s four shots on goal. The club had 12 total shots.

In the 88th minute, Miami’s Andres Reyes was sent off with a second yellow after fouling Franko Kovacevic, but FC Cincinnati could not cash in on the man advantage. Kovacevic, on loan from Bundesliga side TSG Hoffenheim, made his first MLS start on Sunday. He was active with three shots, one on goal.

“Franko’s lively,” Stam said. “He gets in certain areas. When he gets the ball he’s trying to do something with it.”

Eta made conditions difficult for Stam’s side to play the way he wanted. Playing with the wind in the second half helped.

“It’s hard to play,” Stam said. “It’s not easy. There’s a lot of wind and a lot of rain. Of course both teams need to deal with that. If you want to play in a certain way — if you want to build out from the back and through the midfield going forward — it’s not always easy, but that’s how you need to play a lot of times in the first half. If you want to play that long ball or chip it into somebody’s chest, with the wind it’s not easy to do that. It’s difficult, still I have the feeling that we could have done more under these circumstances. It’s a pity that we don’t at least have a point (from the match).”

It was Miami taking advantage of the wind in the first half, scoring on a pair of corner kicks four minutes apart.

Mikey Ambrose collected a loose ball and scored on a volley in the 19th minute. In the 23rd, Leandro Gonzalez Pirez lofted a header out of the reach of Spencer Richey for the 2-0 lead. Miami had 13 shots, five on target, forcing Richey into three saves.