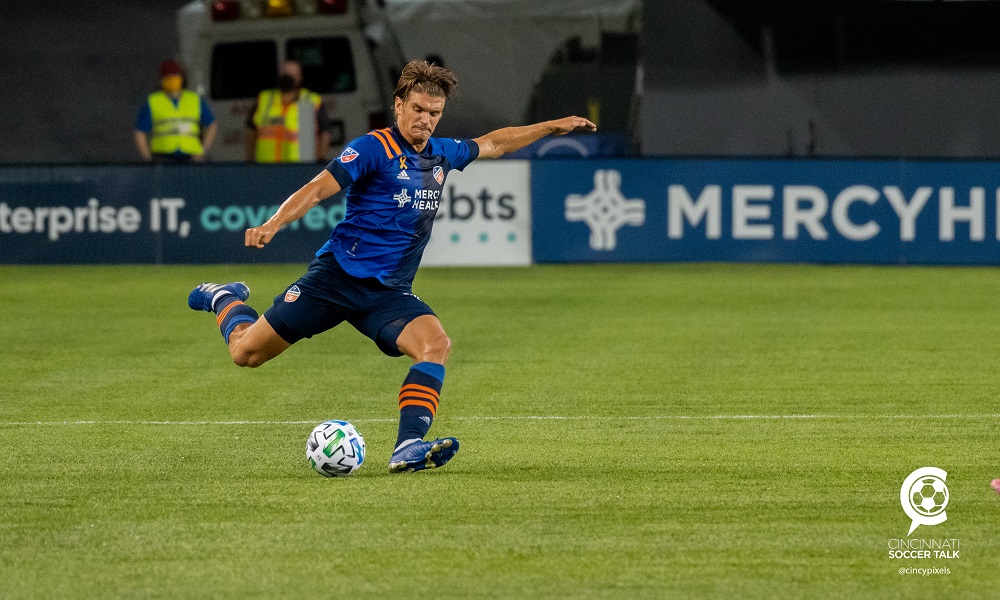 FC Cincinnati conceded a goal in second-half stoppage time Saturday at Nippert Stadium to Minnesota United FC in a 1-0 loss to the Loons.

It was another disappointing result for FC Cincinnati on Saturday as the Orange and Blue fell 1-0 at Nippert Stadium to Minnesota United FC in the final moments of the match. During a corner kick, Aaron Schoenfeld scored a scrappy goal in the box that resulted from a rebound off the post. It wasn’t without contention. FC Cincinnati was heavily protesting the corner kick, claiming the ball last made contact with Minnesota.

“I think you can call our season how it is this year,” said Haris Medunjanin in the postmatch videoconference. “It’s not on our side, and every call is against us.”

But Medunjanin also acknowledged that the team didn’t do enough to get the result.

“I think we started very well, with a couple 100% chances that should normally go in,” he said. “But you don’t score and you let them stay alive. It’s frustrating, but I think we can also blame ourselves. We didn’t score our chances in the first half. Like I said, if you don’t score, you’ll probably lose.”

And that’s what happened. FC Cincinnati came out strong and dominated possession in the first half. Both teams had chances, but FCC looked to be the best team with the best opportunities. As the half continued, though, Minnesota began to assert itself, and it continued to gain confidence in the second half.

Minnesota came out of the locker room aggressively pressing FC Cincinnati and preventing the home team from creating significant opportunities. Minnesota dominated the second half, and in the end, the stats for the entire match looked fairly even, but only one stat mattered, goals scored. FC Cincinnati’s inability to capitalize on its opportunities allowed the Loons to steal all three points.

It wasn’t a must-win game for FC Cincinnati, but the Orange and Blue have dug themselves a hole, and it is unlikely they can crawl out. FC Cincinnati sits at the bottom of the league again, which in a normal season would earn them the Wooden Spoon — an award given by the Independent Supporters Council to the lowest place team in MLS each season. For 2020, the ISC has decided not to award the Wooden Spoon because of the unnatural season, but FCC fans will be unlikely to feel good about that technicality.

Officially, Cincinnati is not out of the playoffs, but another loss will almost certainly seal that fate. A realistic goal for the remainder of the season is to simply not end in last place.

Next up:
7:30 p.m. Wednesday vs. Sporting Kansas City at Nippert Stadium