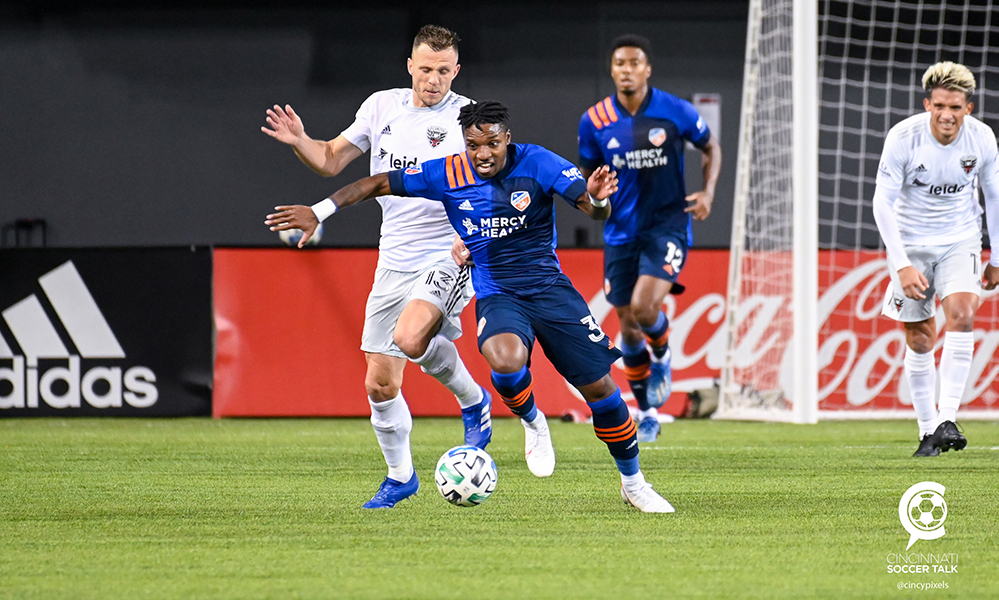 Sunday night’s match against D.C. United represented an opportunity for FC Cincinnati, a chance for two straight wins, to build off the momentum of the win over the Columbus Crew and to reintroduce itself to the playoff picture.

Coach Jaap Stam’s club was as close to being favored in a match as it had been since joining MLS last year. United — which hadn’t won a match since Sept. 2 — was playing its third match since firing head coach Ben Olsen.

But as things turned out, FCC lost 2-1 to D.C. at Nippert Stadium in yet another opportunity missed. And there aren’t many more of those remaining on the schedule.

“Difficult game,” said Stam on the post-game video conference. “Not a game in terms of how we wanted to play. We were not accurate in our passing or good in our movement. You need to bring that every game you are playing. If you can’t bring that, it makes it difficult to get results. It wasn’t enough. We all need to know we need to do better.”

Two minutes into Sunday’s match, Haris Medunjanin found Brandon Vazquez, whose header went just wide. But after FCC controlled possession for the first 10 minutes or so, United had a lengthy spell on the ball.

FCC responded with a decent counter-attack off a United corner but ended up settling for a Joseph-Claude Gyau shot from outside the box that was easily corralled by D.C. keeper Chris Seitz.

Vazquez then took a try from a tough angle, but again Seitz made the relatively easy save.

Then disaster struck in the 36th minute.

FCC goalkeeper Bobby Edwards, who made his second straight start with the top two keepers Spencer Richey and Przemyslaw Tyton – out injured, attempted to catch a free kick while falling out of bounds. Edwards dropped the ball, and United’s Donovan Pines slotted it home to make the score 1-0.

“I don’t know what Bobby was thinking,” Stam said. “That ball was going behind. He made the decision to catch that ball. If you do that, you need to catch it.”

Both clubs were dealing with significant injuries and without their No. 1 keepers.

“We always speak about making our own luck,” said Stam. “You do that by working hard. I’m not saying the players aren’t doing that. You need to win your battles.”

D.C. led at halftime for the first time this season. United also owned 55% of the possession and outworked FCC for much of the half.

FCC found an equalizer in the 66th minute when Seitz could not hold on to Siem de Jong’s shot and Vazquez slotted it home to make the score 1-1.

“I was ready to pounce believing there was going to be a rebound,” said Vazquez. “I sprinted toward the keeper and that’s exactly what happened.”

United regained the lead in the 77th minute when Chris Odio-Atsem slotted home a rebound off Edwards’ save to make the score 2-1, giving Chad Ashton his first victory as interim head coach.

“We can’t concede like that,” said Stam. “We needed to get back into the game. You want to maintain a certain pressure on them after the equalizer, then we give the ball away again. You make it difficult for yourself to win games. It’s becoming difficult to get points.”

FCC (4-11-4) snapped a five-match winless streak with a 2-1 victory over the Crew on Wednesday. It was the Orange and Blue’s first victory over its in-state rival since joining MLS, but it couldn’t build off that momentum on Sunday.

The Orange and Blue were outworked for most of Sunday’s match, with D.C. owning a 59 to 48 advantage on duels and 15 to 5 on tackles.

“The mood coming into this game was good,” said FCC forward Rashawn Dally. “We came off a big win last week. We wanted three more points. I thought the energy was great. Just unfortunate it didn’t go our way.”

It was the second meeting this season between FCC and United with the teams playing to a 0-0 draw at Nippert Stadium on Aug. 21 in the first game following the MLS is Back Tournament in Orlando.

Sunday’s match was more eventful, but FCC couldn’t come away with any points.

“We were distracted on some plays,” Vazquez said. “We make an error, we leave a guy open — it’s just errors that can be fixed. There is always next weekend to look forward to and this week to emphasize these things and get better.”

Next up:
7:30 p.m. Saturday vs Minnesota United, Nippert Stadium