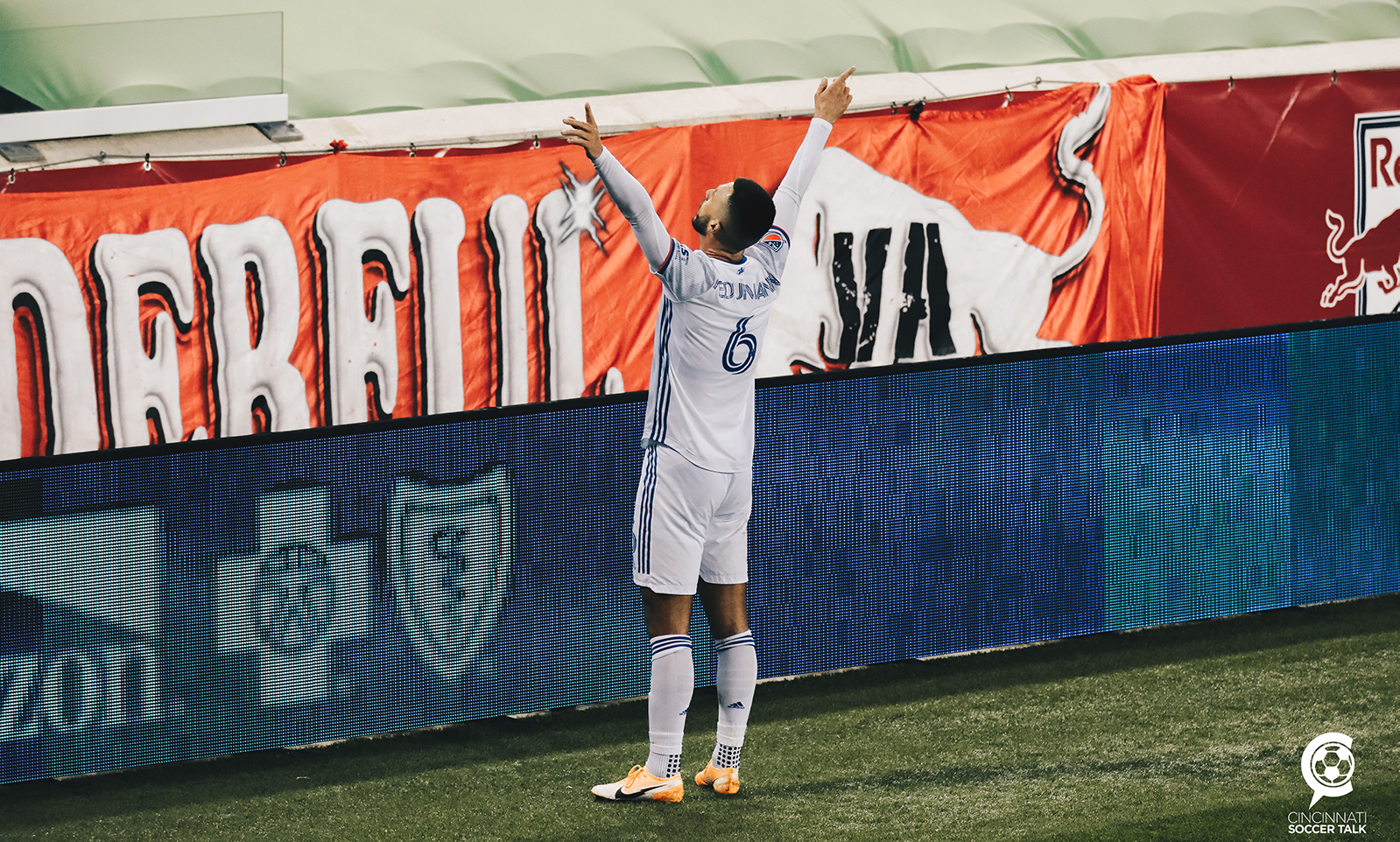 Haris Medunjanin scored on a corner kick in the 85th minute to send FC Cincinnati to a 1-0 victory Saturday at the New York Red Bulls.

Sometimes you need a little bit of luck, and sometimes you have to make your own. FC Cincinnati had and did a bit of both on Saturday night at Red Bull Arena, earning a 1-0 win over the New York Red Bulls.

Despite registering 14 shots throughout the match, it was Haris Medunjanin curling in a corner in the 85th-minute that broke the deadlock and earned all three points for the Orange and Blue.

“I was surprised it went in straight,” said Medunjanin said afterward in the post-match video-conference. “It was like five minutes to go and we pushed everybody in front of the goalkeeper like we did the (last) game against Red Bull and I was trying to shoot the ball as hard as I could to the goal. Sometimes, you need to have a little luck.”

Luck or not, the goal ended a seven-match winless run for FC Cincinnati. It was the club’s first win since July 22, also coming against the Red Bulls in the MLS Is Back tournament in Orlando, Florida.

The result sees the club improve to 3-6-3 (12 points) and jump into the Eastern Conference’s 10th and final playoff spot.

Manager Jaap Stam aimed for FC Cincinnati to press the Red Bulls out of the gates, and he did so with yet another new-look starting 11.

Stam’s line-up featured four changes from last Saturday’s 2-1 loss at New York City FC. In goal, Spencer Richey made his first appearance since March after suffering a concussion in Orlando. Additionally, defender Nick Hagglund and forward Brandon Vázquez were both handed their first starts of 2020 — the latter earning his spot after scoring last time out against New York City FC. Frankie Amaya was the final change, being restored to Siem de Jong’s role in midfield.

With both Jürgen Locadia and Vázquez in attack, Stam also deployed a slightly different forward-facing shape than in recent weeks. The 3-5-2 gave way for a 3-4-3, as Joseph-Claude Gyau and Yuya Kubo alternated joining the two out-and-out strikers in an effort to alleviate the team’s recent scoring struggles.

Whether the result of those changes or not, the Orange and Blue started the match brightly. The high defensive pressure coupled with a solid attacking mentality saw the club secure nearly 60% of possession in the first half.

In the 35th minute, the extra intensity appeared to have paid dividends when a brilliant movement ended with Vázquez beating the opposition keeper for the second time in as many weeks. However, a correctly-raised offside flag ruled the goal out. And if not for a brilliant one-on-one save from Red Bulls keeper David Jensen on Locadia just six minutes later, FC Cincinnati could have had a lead heading into the break.

The second half started similarly. And though FC Cincinnati’s continued pressure was yielding more opportunities, its hosts would again manage to stymie them.

For Locadia, the second half continued a frustrating trend. The Dutch striker has failed to score since finding the net in his FCC debut against the Red Bulls back on March 1. He twice managed to get in behind the New York defense in the second half. But just as with his chance in the first half, each time he again failed to convert.

To help lend his struggling striker some assistance, Stam replaced Kubo with Allan Cruz in the 78th minute. The impact was nearly immediate, with FC Cincinnati going on the offensive and earning a series of corners.

The last of those came in the 85th minute, and that’s when the magic happened.

“We didn’t exactly train on (Medunjanin’s corner kick goal), but we know how he can hit the ball,” said Stam. “That’s what we’ve seen in Orlando against New York, that he has got the ability to put that ball in the goal by himself instead of somebody else touching it. He aimed for the second post, it went in and is a very important goal for us.”

But whether the goal was lucky or intentional, Stam believed his men deserved all three points.

“Everybody was very committed, was very aggressive … focused in going forward in the press but also showing quality on the ball,” Stam said. “What I mean by that is ‘OK, there’s certain parts of the game I could (press). Certain parts of the game are not that good, we can’t keep it up.’ (Saturday), you’ve seen that we kept it up for the majority of the game in how we wanted to play. So, for me and my staff, we’re very proud of the players and that they could bring that energy to the game today and also show the quality in creating opportunities.”

Next up:
7:30 p.m. Wednesday vs Philadelphia Union, Nippert Stadium