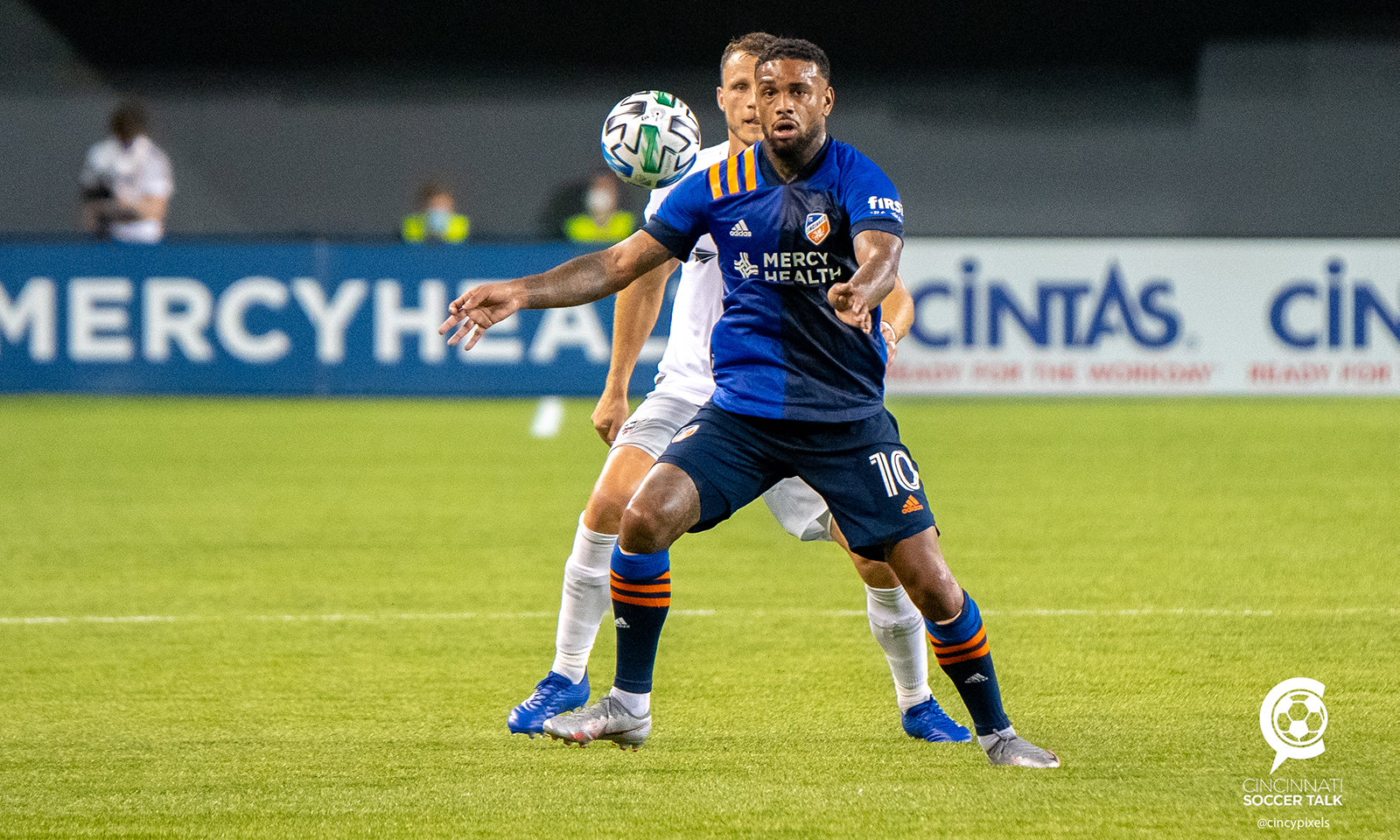 ‘Pissed off’ Locadia looking to find the net for FC Cincinnati

FC Cincinnati striker Jurgen Locadia says it’s hard for him not to be agitated for a couple of days if he doesn’t score in a match. Locadia has not scored in the regular season since the first match against the Red Bulls on March 1.

Jaap Stam sees a lot of himself in Jurgen Locadia — the competitiveness, the ability, the drive to succeed.

FC Cincinnati’s head coach also knows something about the pressure the Dutch striker is under, having shouldered similar burdens during his storied playing career.

With talent comes expectations. But when those begin to creep into a player’s mental approach, it’s important for a manager to help ensure it doesn’t impact his performance on the pitch.

“I know the personality that he is, that I was as well,” Stam said via video conference on Thursday. “As a player, feeling that little bit of pressure, you start thinking about things more and more, and you don’t need to do that. I spoke with him. Jurgen is a great guy to work with. He’s got great ability as well. He’s still quite young. Everybody knows what he can do and what he can give us.”

Locadia was a big-name acquisition for FCC, a player who at the relatively young age of 26 has 45 appearances combined in the top-flight in England and Germany. He scored 45 goals in 127 appearances at PSV in the Dutch Eredivisie.

After Locadia had an impressive showing in FCC’s first two regular-season matches before the COVID-19 pandemic halted the season, FCC and Brighton & Hove Albion ended months of speculation when in June they agreed to extend his loan deal by one year, meaning he would remain with the club until June 30, 2021.

Locadia, who missed a few weeks with a thigh injury, has been under a microscope ever since.

The Dutchman missed a sitter against Portland that likely would have sent FCC through to the quarterfinals of the MLS is Back Tournament in Orlando. He had a tougher look at a potential winner against D.C. United at Nippert and had it carom off the post. He was a split-second late finding a touch on a cross against Columbus that could have broken a scoreless deadlock.

“I put pressure on myself every game,” said Locadia via video conference on Thursday. “Unfortunately, in games like D.C., I hit the post. Or the game against Columbus, I don’t reach the ball in the last second. I think those moments are key for a striker. I’m pissed off when I don’t score a goal, for one day or two days after the game. It’s hard for me not to be agitated.”

Which is why Stam stepped in.

Fact is, this isn’t all Locadia’s responsibility. While Stam has lauded Locadia for continually getting himself into positions to score, the reasons he hasn’t scored more than two goals across nine matches has as much to do about his teammates’ ability to consistently get him the ball in quality positions.

“Personally, I’m looking for (better) connection with the midfielders with the other strikers to get more in scoring positions,” Locadia said. “Overall, I could be better. I’ve been playing this game for so long. Back in the day, I might have been nervous if I haven’t scored for a certain amount of time. Now I can control my emotions.”

As hard as Locadia is on himself, his experience as a player in the upper echelons of Europe makes him a veteran leader on the club.

Locadia praised Stam for his approach since coming on board and said it made sense that a new coach would want to fix FCC’s porous defense first before focusing on the attack. On Thursday, Locadia set his own struggles aside and offered a vote of confidence for his teammates, and the fans.

Locadia and FCC will be looking for more signs of progress on Saturday night when they face the New York Red Bulls at Red Bull Arena in the first match in the next phase of the MLS regular season schedule. The margins are thin for FCC. One goal, one win, could change a lot, says Stam.

“In football, in soccer, it’s very close,” he said. “You can have a very difficult time and then you score, or you win, and the whole world looks different.”

‘Pissed off’ Locadia looking to find the net for FC Cincinnati