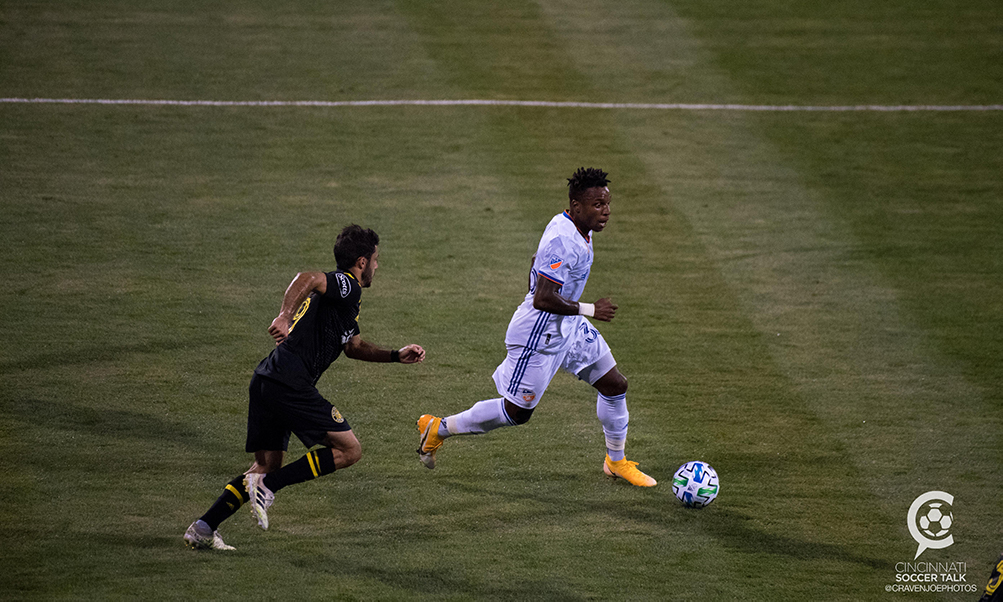 FC Cincinnati’s goalless drought is over, but the club leaves Red Bull Arena disappointed after falling short of a result it had a realistic chance to take.

Brandon Vazquez put back his own miss off of New York City FC goalkeeper Sean Johnson’s foot in the 74th minute Saturday, stopping FC Cincinnati’s scoreless run at 558 minutes, the fourth-longest spell in MLS history. Vazquez’s goal came in the midst of a furious second-half comeback attempt. But in the end it was NYCFC that took all three points in a 2-1 victory over the Orange and Blue.

“When you score a goal, that’s very positive (for the team) and especially for Brandon as well because he’s not had the easiest of times,” FC Cincinnati coach Jaap Stam said in his postmatch videoconference.

“The thing is that we should score more. So we can be honest to each other. It’s nice that you score a goal, but you still lose. It’s about the points. You want to win.”

It was a sluggish start for FC Cincinnati, though the club did have a chance in the second minute on a free kick, but Siem de Jong’s service to Jurgen Locadia was not timed right.

With some defensive pressure, NYCFC created turnovers and chances. At one point in the first half, NYCFC had a 64%-36% possession advantage.

“We spoke about (needing) to start in a certain way, a certain mentality and what to do,” Stam said. “We couldn’t bring that in terms of pressing and being aggressive enough in small periods in the first half. We went back too quick, and that makes it easier (for the opposition) sometimes because the forwards and midfield players wanted to press defenders running back and you create space for the opposition to play through, and they have this ability, which we knew. You don’t need to give them that. You make it difficult for you.”

NYCFC broke through for a 1-0 lead in the 39th minute when Alexander Ring scored on a through ball in the middle of FC Cincinnati’s back line. The goal was reviewed for a possible offside call, but FC Cincinnati’s Andrew Gutman played Ring on.

NYCFC’s Anton Tinnerholm scored on a volley off a corner kick well outside the penalty box in the 55th minute to make it 2-0.

But unlike in Columbus when a one-goal deficit quickly turned into three, there was quite a response from FC Cincinnati.

Stam switched from his standard 3-5-2 to a 3-4-3 in the 65th minute, subbing midfielder Allan Cruz on for forward Yuya Kubo and bringing defender Nick Hagglund in for de Jong. In the 73rd minute, Vazquez came on for defensive midfielder Caleb Stanko.

“I think it’s a boost that we needed because the last 20-25 minutes (before the goal) we really showed up as a team,” Vazquez said. “We need to grab that and run with it and keep doing that from the very first minute of the next game. We’ve shown as a group what we’re capable of doing.”

NYCFC didn’t quite know how to handle the formation change, and FC Cincinnati was on the front foot in the waning minutes.

Vazquez had an equalizer wiped away with an offside call in the 76th minute, and Johnson made a critical save of a Kendall Waston header off of a corner. Johnson had four saves, compared to Tyton’s three for FC Cincinnati.

FC Cincinnati had 14 shots, five on target, most coming in the second half. NYCFC had 16 shots with five on frame.

“When you go down and then you come back into the game, that’s very positive and it’s the positivity of the players who come on,” Stam said. “But you’re expecting from the start a certain intensity — what we can deliver and what we need to deliver. At times we do that too late.”

FC Cincinnati returns to Red Bull Arena the next two Saturdays against the New York Red Bulls on Sept. 19 and a rematch with NYCFC on Sept. 26, with a midweek contest against the Philadelphia Union at Nippert Stadium sprinkled in between. Now that the goalless run is over, the club should just keep shooting, Joseph-Claude Gyau said.