Brad Gough breaks down how the Chicago Fire scored their three goals in Tuesday’s 3-0 victory over FC Cincinnati.

FC Cincinnati sleepwalked its way to a 3-0 loss to the Chicago Fire on Tuesday. After falling behind in only the second minute of the match the Orange and Blue never recovered. Each goal was conceded due to a combination of individual errors. Here’s how they happened.

Fabian Herbers opened the scoring very early for the Fire on a nice finish off a long ball in behind the FC Cincinnati defense. It began with Allan Cruz pressuring the ball on the wing. Frankie Amaya and Andrew Gutman were perfectly positioned to cover him (blue). Caleb Stanko (red) was the free man in midfield with no opponent to mark. 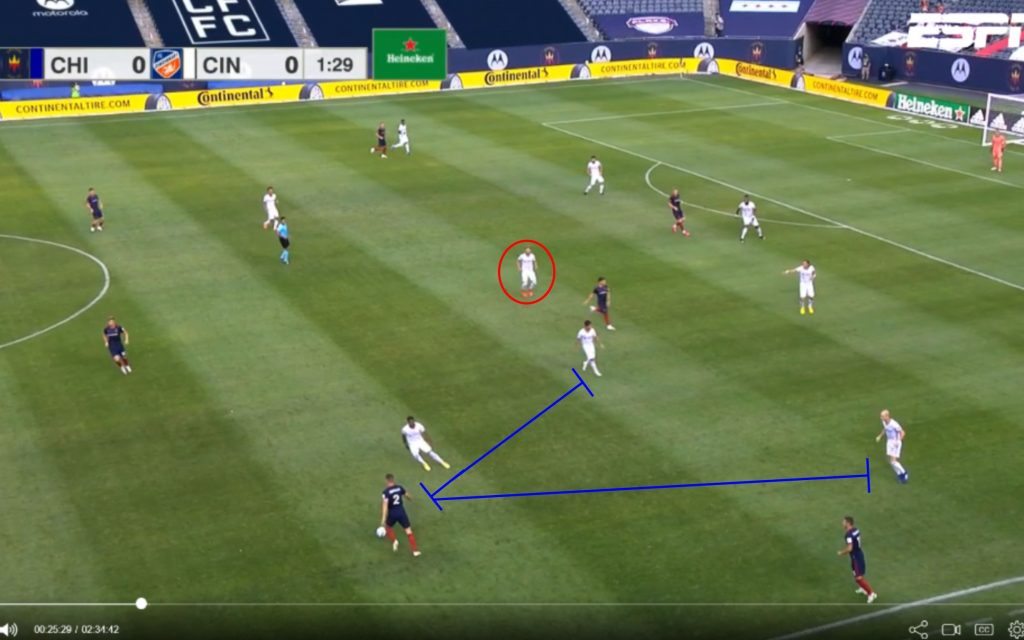 As the ball moved inside to Gastón Giménez, no FCC midfielder reacted to the pass. As the free player in midfield, Stanko should have been aware of Giménez and already closing him down. Boris Sekulic continued his run (dark blue), causing Amaya and Cruz to stay in place to prevent the return pass. 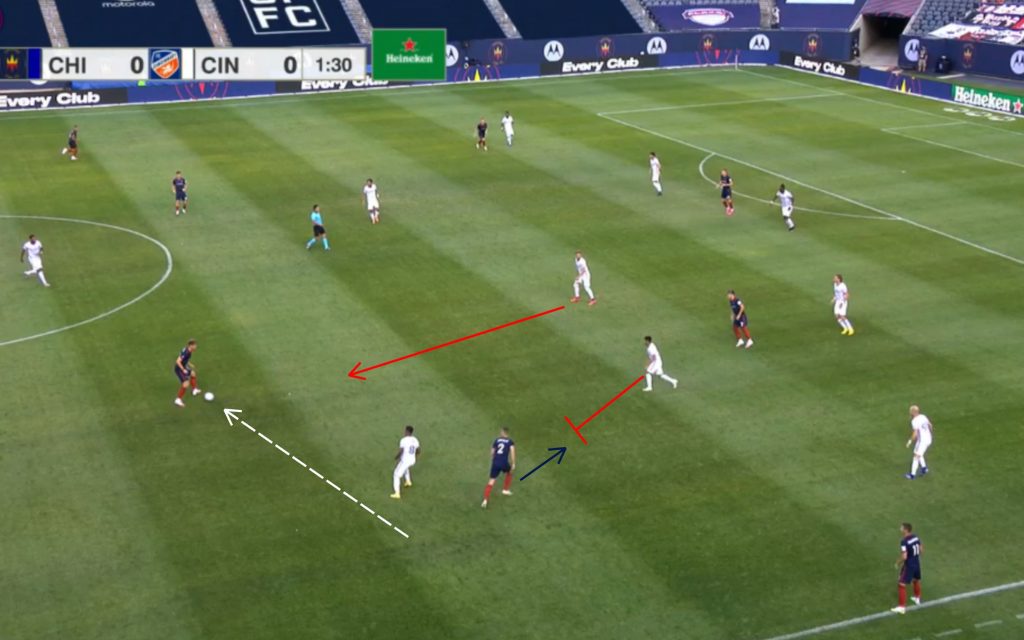 Instead, Giménez was free to take his time in looking up and finding the well-timed run of Herbers. Tom Pettersson was the only one of the FCC center backs correctly positioned. Kendall Waston and Mathieu Deplagne both allowed Fire attackers to sit between the gaps in the backline. When correctly positioned here, Waston would be positioned near the central attacker, and Deplagne would be tracking the run of Hebers. 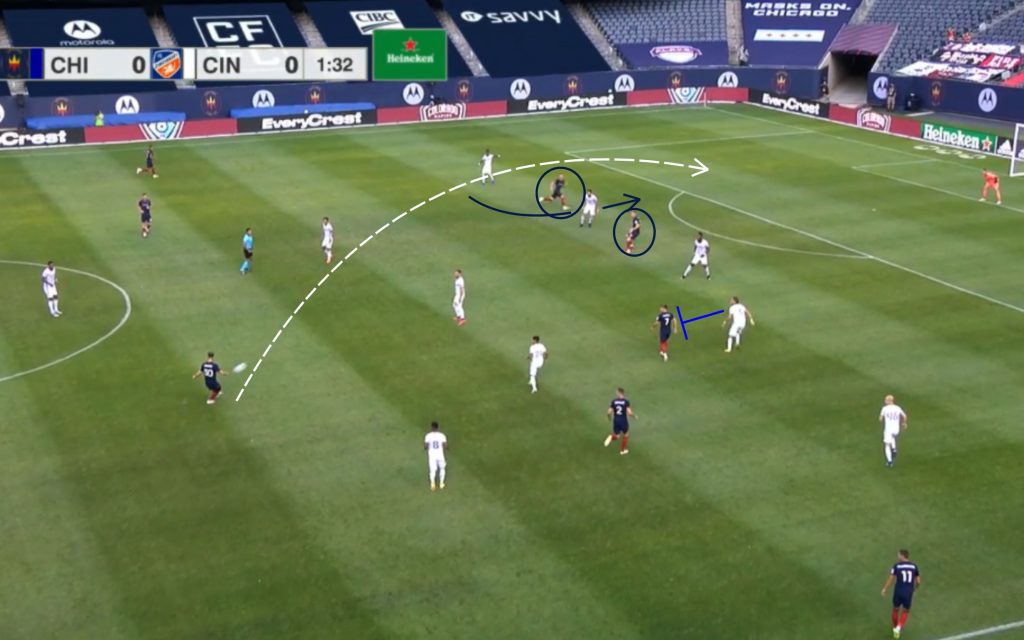 A view from the touchline shows how slow Deplagne was to react to the long ball. Due to the flat trajectory of the ball, goalkeeper Przemyslaw Tyton would have had a very tough time coming to claim the ball. Instead, he stayed put several yards off of his line and Herbers neatly flicked the ball beyond him. 1-0 to the Fire.

Chicago’s second goal came just eight minutes later. Once again a lack of midfield pressure began the play. When a player is applying pressure in the midfield and the ball is moved, he is taught to drop into cover while one of his midfield partners moves forward to pressure. This avoids ball chasing and allows the midfield to keep a good pressure-cover structure.

Here, Yuya Kubo applied pressure on the Fire’s left touchline. As the ball is moved separately, he should have dropped while Stanko moved to pressure. Neither happened, and Álvaro Medrán was free to take several touches before spotting the run of winger Przemyslaw Frankowski. 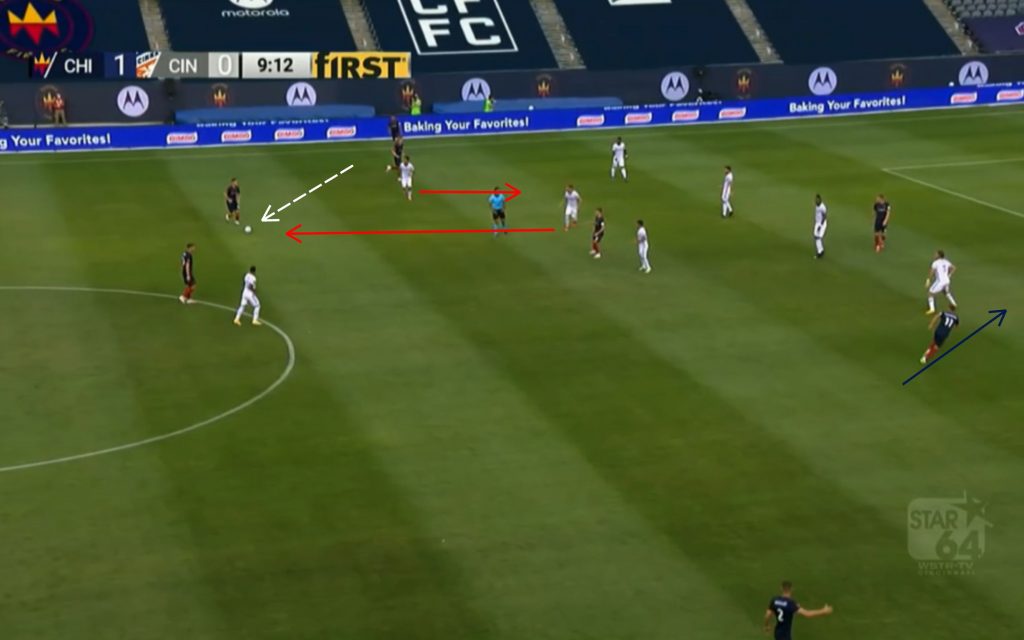 As Medrán’s pass sailed over the FCC backline, Pettersson misjudged it slightly. He was forced to turn his back to the flight of the ball in an attempt to catch up to Frankowski. 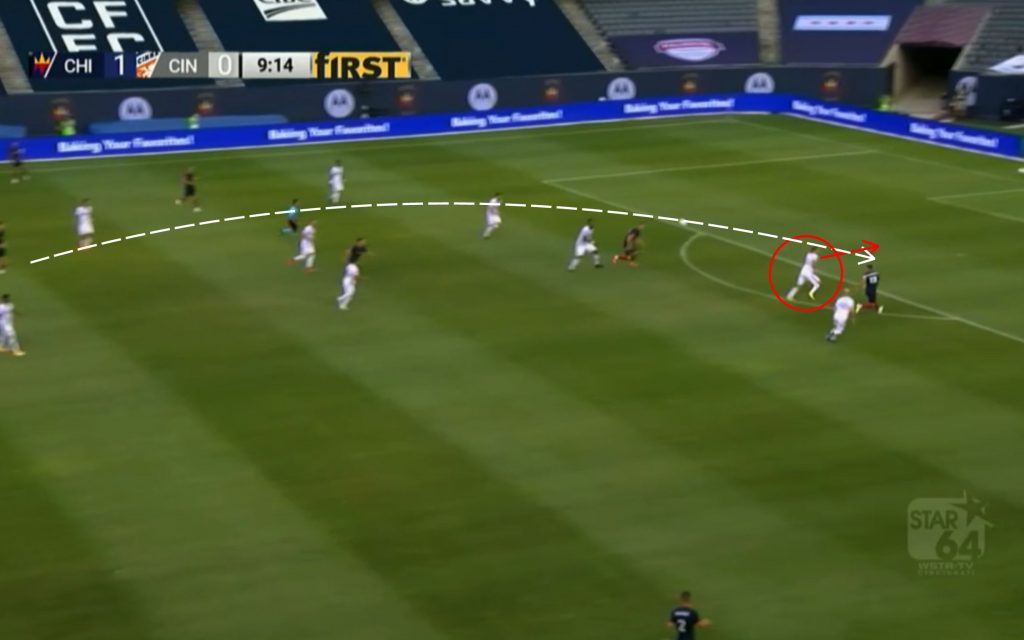 Frankowski knocked the ball down into the path of teammate Ignacio Aliseda, whose shot was blocked. As the ball ricocheted into the midfield, Stanko and Waston watched, showing no urgency to close down the onrushing Medrán. Only Amaya attempted to make a play on the ball. 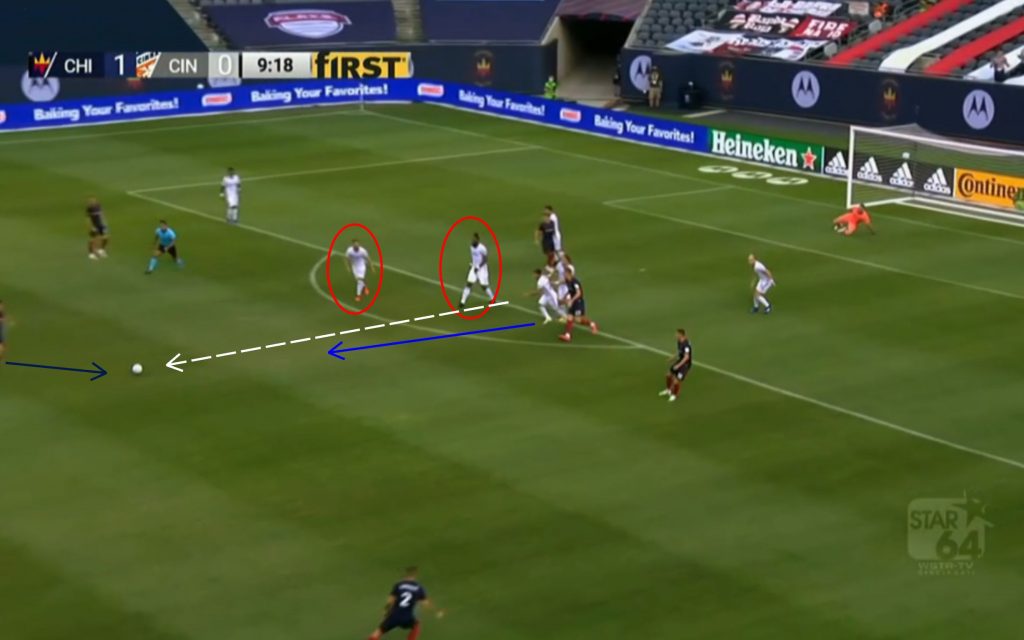 Amaya’s effort proved too little as he turned his back just as the shot was struck. Medrán hit it unbelievably well, and it curled its way through the sea of bodies screening Tyton. The only other player that could have stopped the goalazo was Deplagne (red circle), who was incorrectly positioned to the outside of his mark. With Deplagne incorrectly positioned, Tyton was left helpless as he couldn’t see the shot until it was too late to react to it. 2-0 to the Fire. 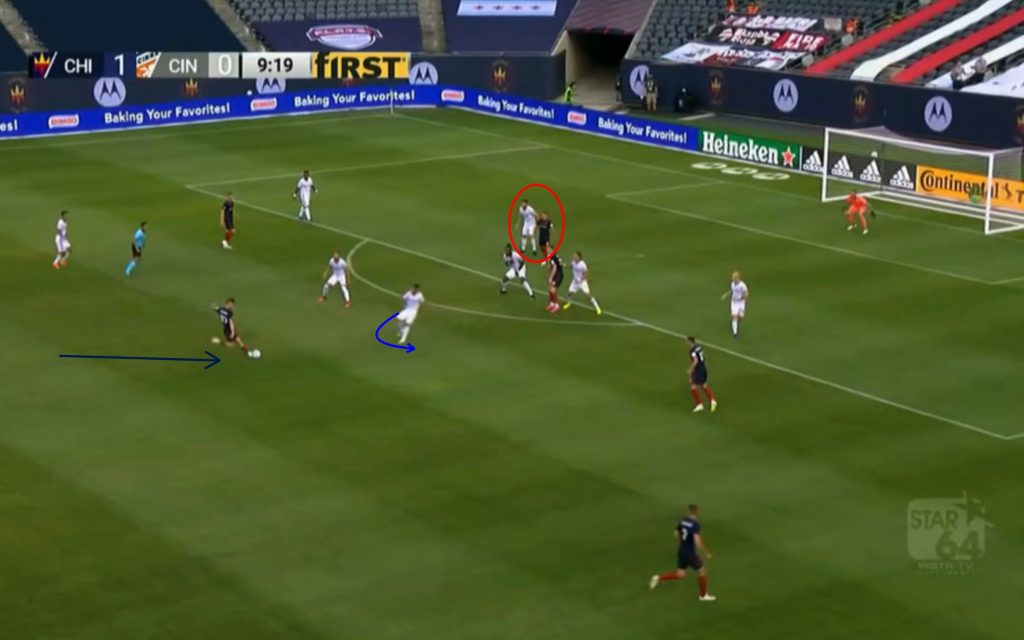 Aliseda piled on the Orange and Blue, adding a goal to his stat line that already included an assist. The move began with Elliot Collier taking on Andrew Gutman. Gutman incorrectly approached Collier, failing to force him to the outside. 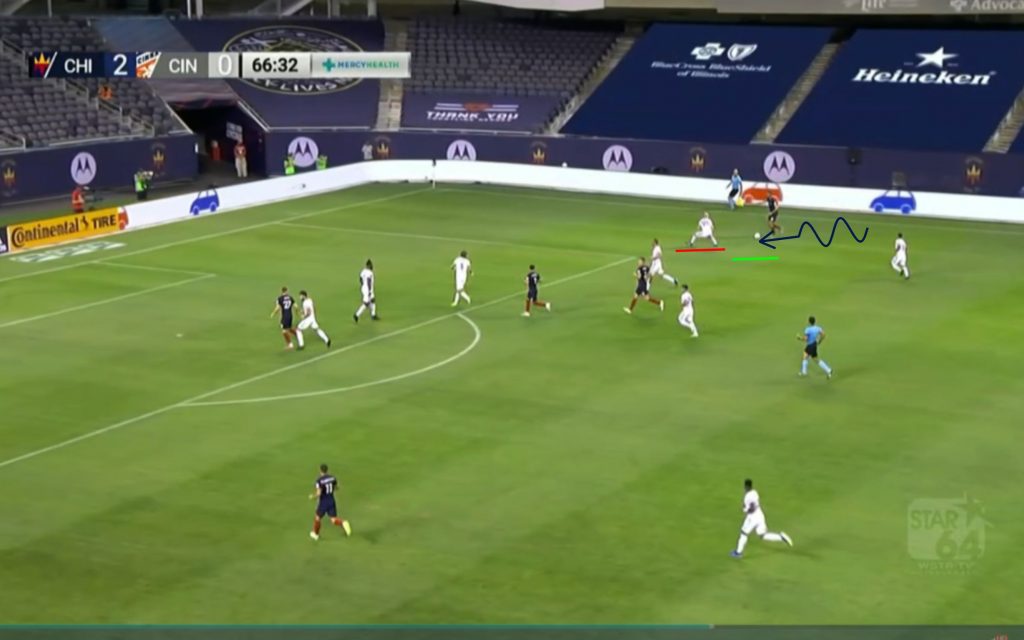 As Collier cut inside, Siem de Jong was well-positioned to provide cover (red). However, he failed to step to the ball, allowing Collier to slip a pass into Sekulic. The three FCC center backs initially reacted correctly, with Pettersson closing on Sekulic, Waston in a good spot to mark Aliseda, and Deplagne rotating toward the back post. 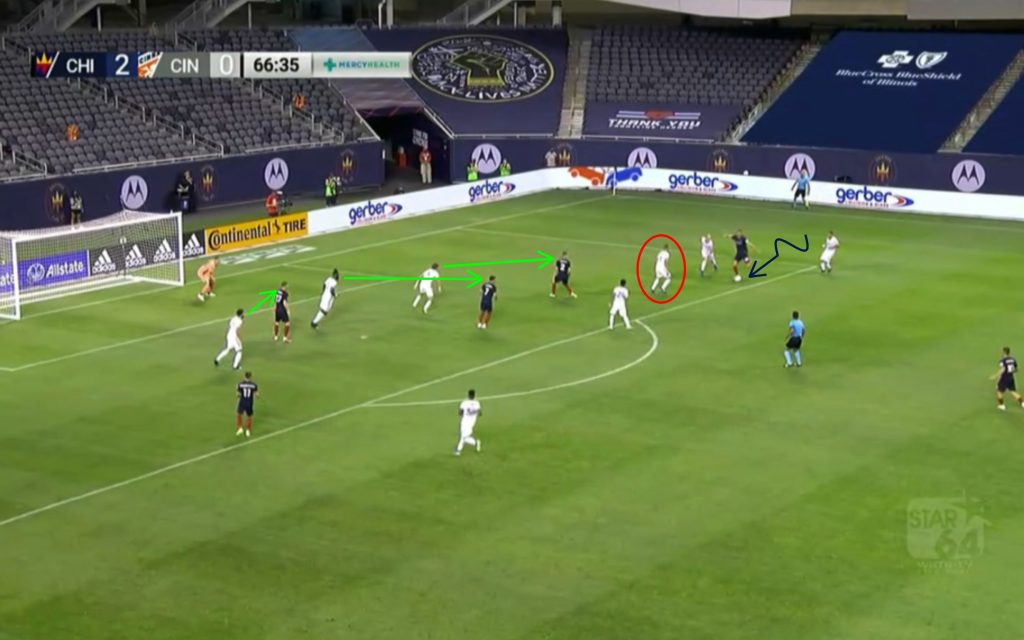 However, Waston got caught ball watching as Sekulic squared the ball to Aliseda, who opened his hips and easily slid his shot into the far post. 3-0 to the Fire. 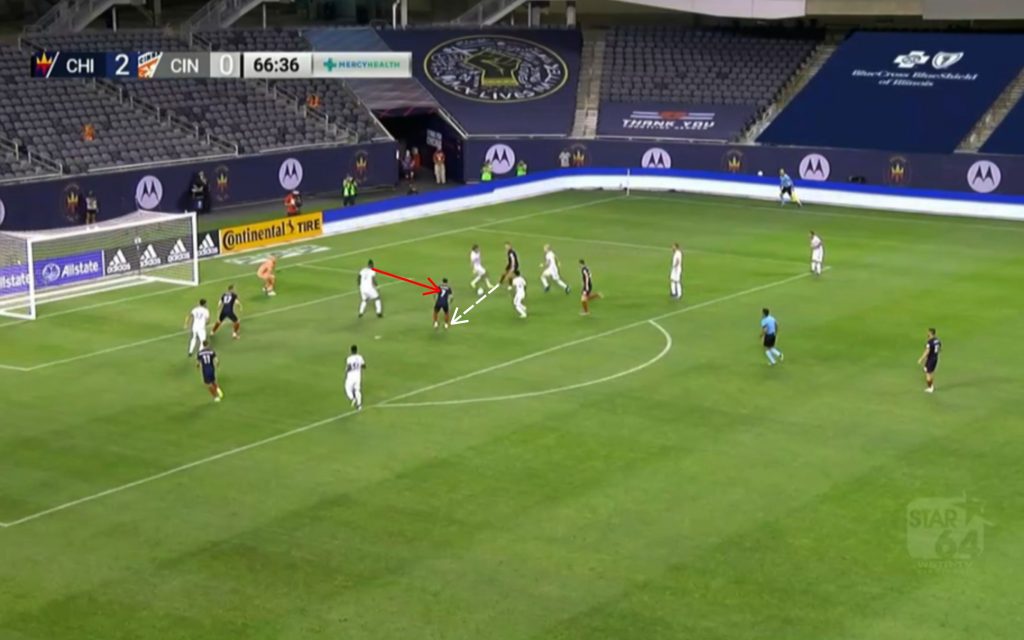 The blame for each goal by the Chicago Fire can be placed at the feet of multiple FC Cincinnati players. Truth be told, none of them should be proud of their performances. The good news here is that, unlike last year, the mistakes of this match have not plagued the team in the preceding contests. Hopefully this performance was a one-off, and the team will adjust and be prepared to take on the Columbus Crew on Saturday.

Tune into the latest Talking Tactics with Coach Gough Podcast as Coach breaks down the last match and answers your questions in the mailbag. Look for our newest podcast on your favorite podcast network each week!