Brad Gough breaks down FC Cincinnati’s play on both sides of the ball in Tuesday’s shootout loss to the Portland Timbers.

FC Cincinnati fell in penalties to the Portland Timbers to be eliminated from the MLS is Back Tournament on Tuesday. After defending fiercely for more than 60 minutes, it fell behind 1-0 before clawing its way to a 1-1 draw in regulation. Here’s how it happened.

FC Cincinnati once again employed the conservative 5-3-2 formation it had utilized in the previous two matches, and until falling behind, it once again showed a lack of urgency going forward.

This became evident very early in the match. Here, right wing back Joseph-Claude Gyau picked up the ball, and FCC was well-positioned to counter-attack with three attackers beyond the Portland midfield line and only three Timbers defenders back. 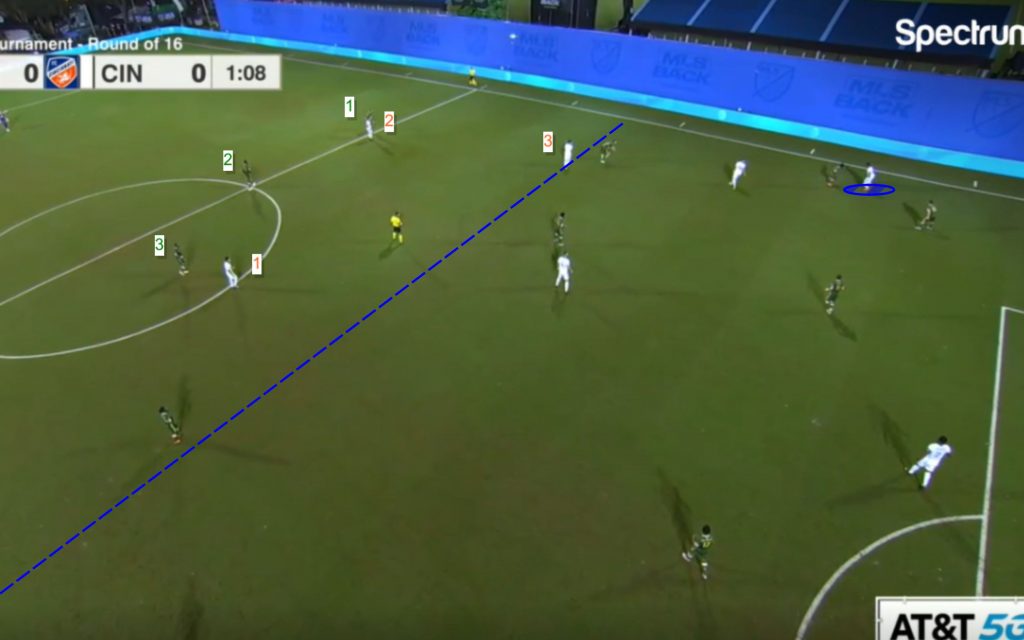 Gyau did as he had much of the tournament and torched his defender to dribble into the open field. Left back Andrew Gutman burst forward in support, but the rest of the FC Cincinnati attack (circled) mostly stood still. 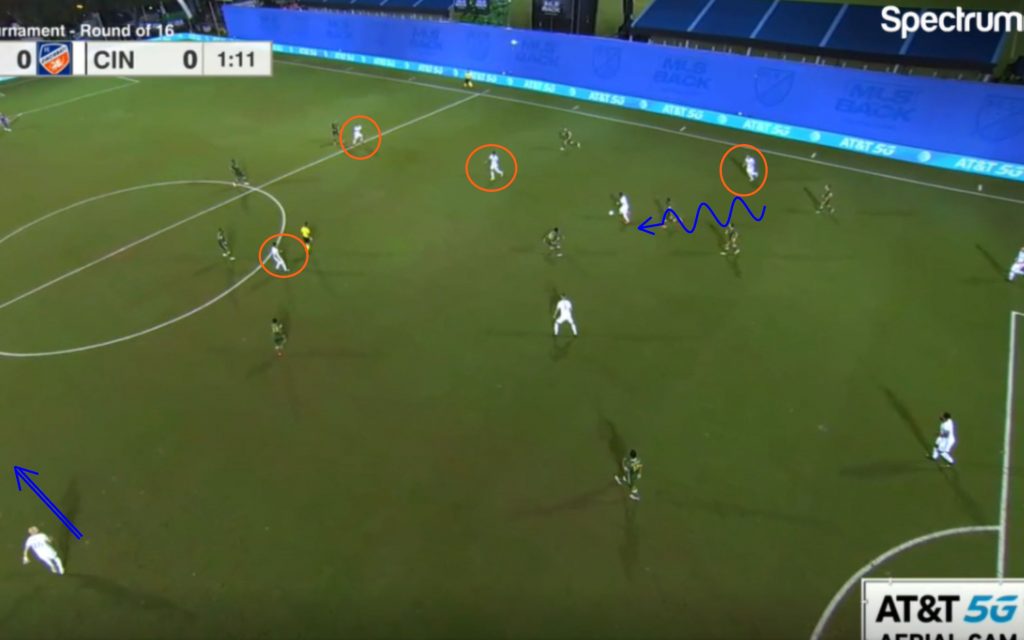 A look at the same still frame shows what kind of possibilities were present in this counter-attack with a bit of urgency. Adrien Regattin, the highest FCC player on the field, could have checked toward Gyau, bringing a defender with him. This would have opened up space for running mate Yuya Kubo to exploit in behind the Timbers defensive line. Similarly, Frankie Amaya could have recognized the space to the left of the Portland back line and tried to move in behind as well. 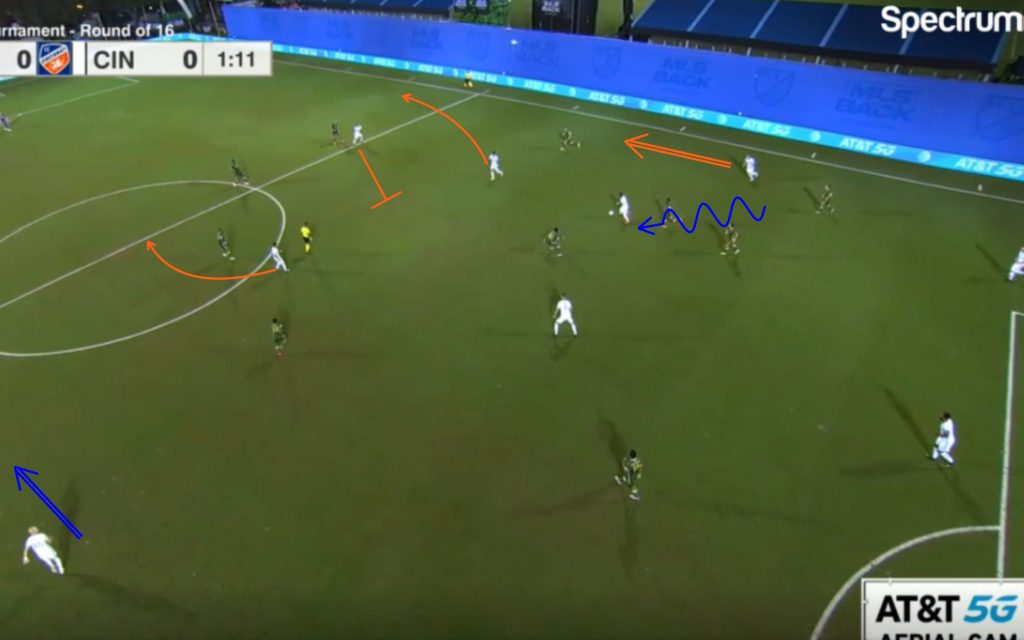 At worst, these movements would have provided Gyau with more space in which to dribble and eventual recipient of the ball Gutman with targets in the box at which to aim. At best, one of either Kubo or Amaya would have gotten in behind for a direct pass from Gyau leading to a breakaway.

For much of the match, FC Cincinnati limited Portland to hopeful crosses and shots from distance. However, in the 67th minute Diego Valeri picked the ball up on the left wing, beginning the movement that led to the opening goal.

As Valeri received the pass from left back Jorge Villafaña, Gyau correctly moved to apply pressure to the ball. With Villafaña forward, Caleb Stanko moved to a covering position for Gyau, aware of the American left back’s potential run. Each of the remaining four FC Cincinnati defenders were matched up one to one with a Portland attacker. 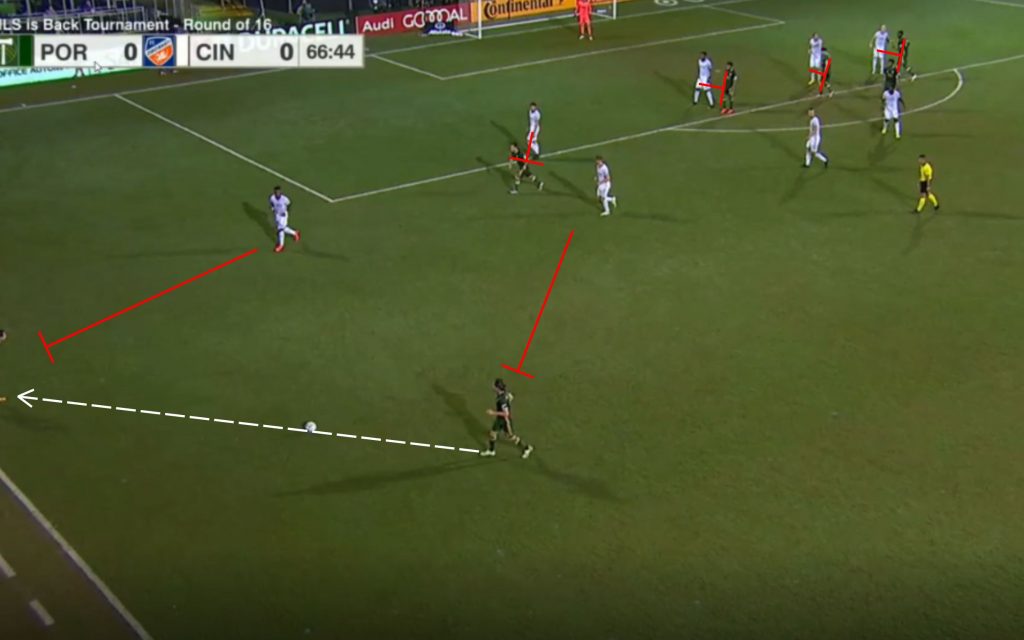 Sebastián Blanco, recognizing that he was in a position behind Stanko and unable to receive the ball, made a run to the corner. Mathieu Deplagne, clearly wanting Stanko to follow the Portland midfielder, stayed in place, allowing Valeri to easily find Blanco in behind. 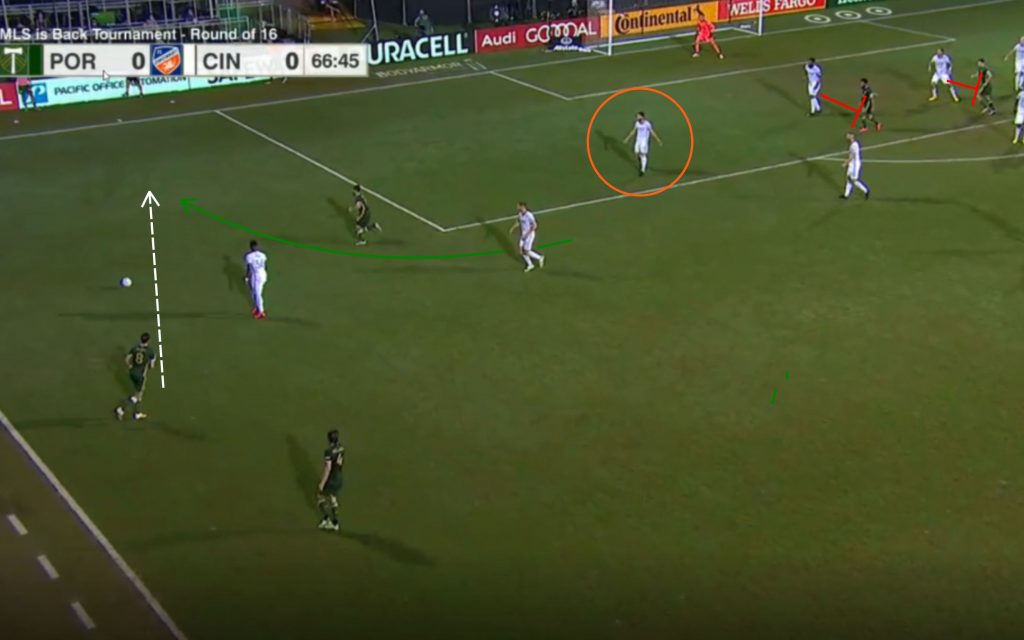 But should Stanko have listened to Deplagne and followed Blanco’s run? The “what-if” scenario below shows why Deplagne was incorrect. Had Stanko followed Blanco, Valeri would have been free to cut inside on the dribble, not only giving himself the opportunity to shoot or cross, but also opening up Villafaña for the overlap. 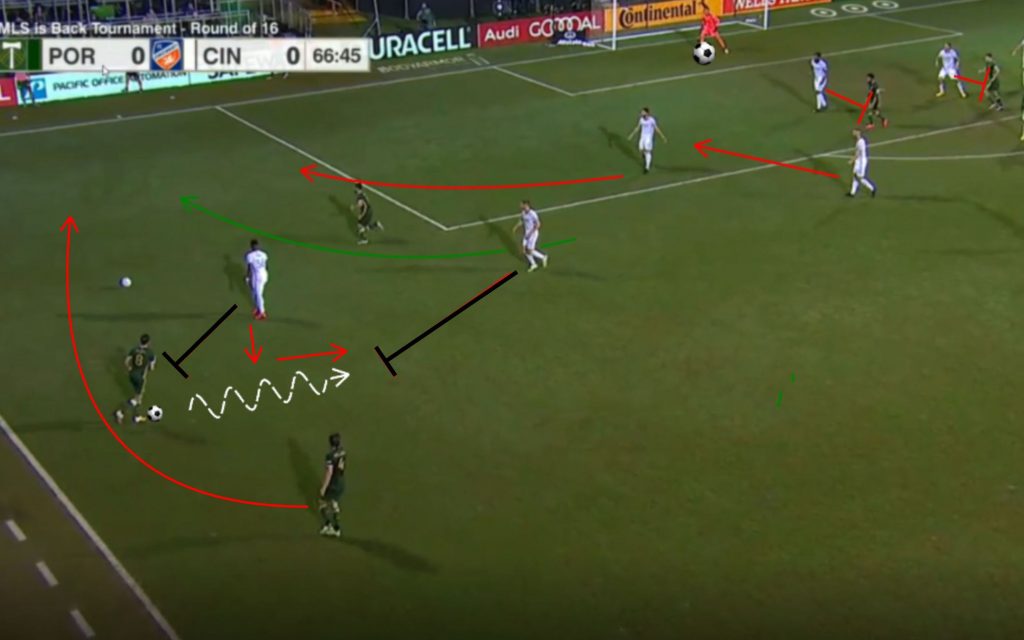 Finally, Blanco picked up the ball on the goal line as Deplagne charged out to close him down. Kendall Waston, unaware, defended the space in front of the near post unoccupied by any attackers. As Niezgoda and Jeremy Ebobisse both made decisive runs into the FCC 6-yard box, Tom Pettersson picked up Ebobisse and tried to pass Niezgoda to Waston. Watson was too far forward in his zone (red), and was unable to pick up the run. 1-0 to the Timbers 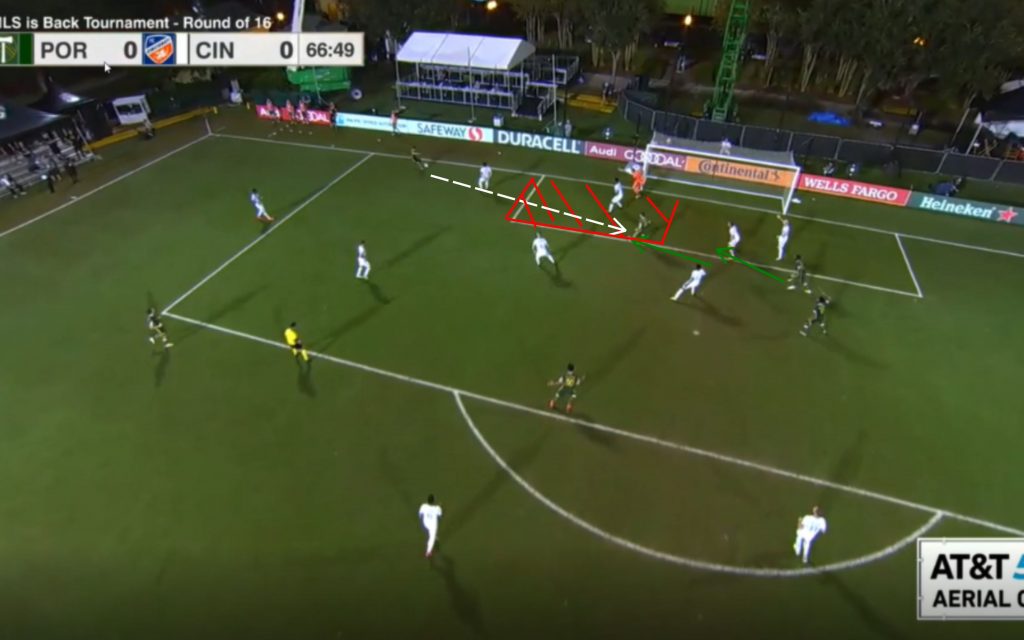 Another look at the frame shows the correct defense for this situation. Stanko, Haris Medunjanin and Fatai Alashe are responsible for cutback lanes. If Waston correctly defends from inside the near post (yellow cutout), then he is positioned to mark Niezgoda while allowing Pettersson to pick up the run of Ebobisse and Gutman to keep track of his mark. 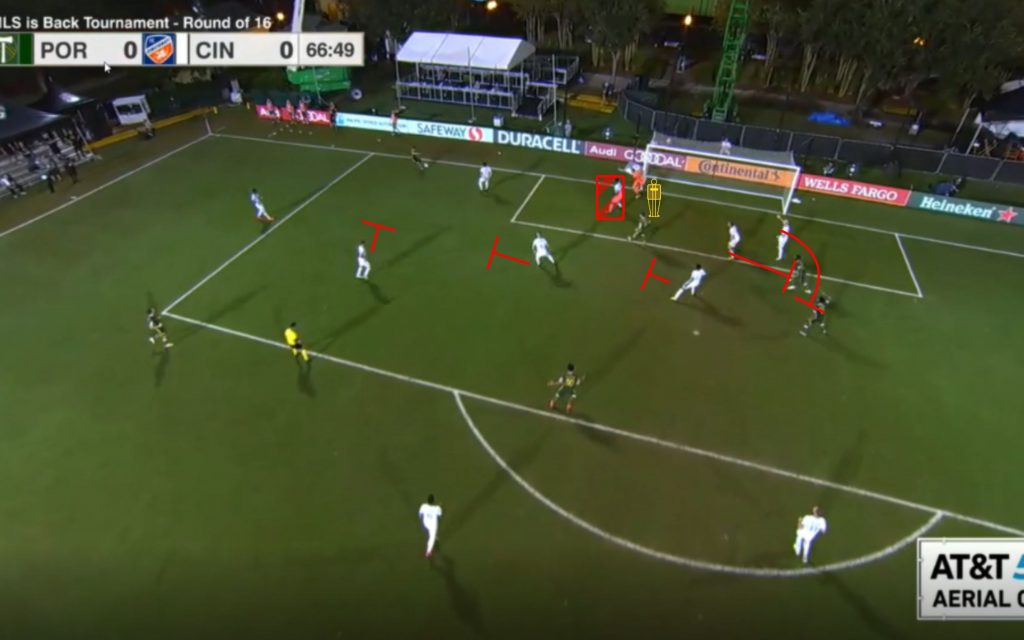 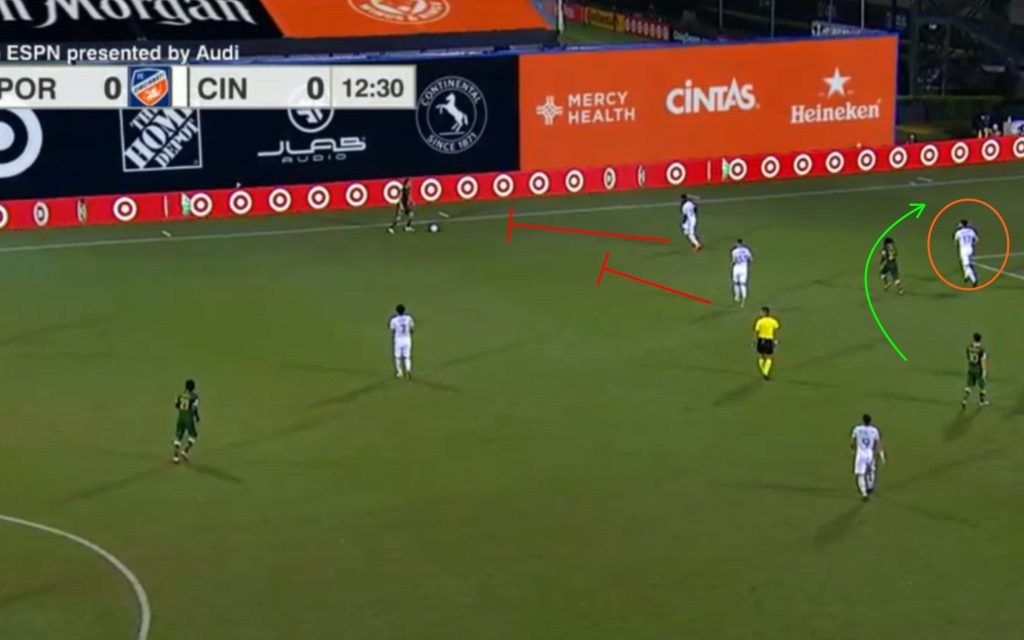 In Possession, the Good and the Infuriating

Despite the lack of urgency going forward, FC Cincinnati still looked very good in possession at times. Even with time and space, however, it was often reluctant to play the ball between the lines.

This example from the 30th minute is taken from a spell of possession where FC Cincinnati had 18 successive passes over nearly a minute of game time before Kubo had a shot blocked. Most of this possession, however, was mundane. Here, Pettersson elects to play a simple ball to Gutman on the left wing instead of trying to pass through one of the midfield windows (green dashed) to gain penetration. This is not solely on Pettersson, however, as Amaya and Regattin were not working particularly hard to show for such a pass. 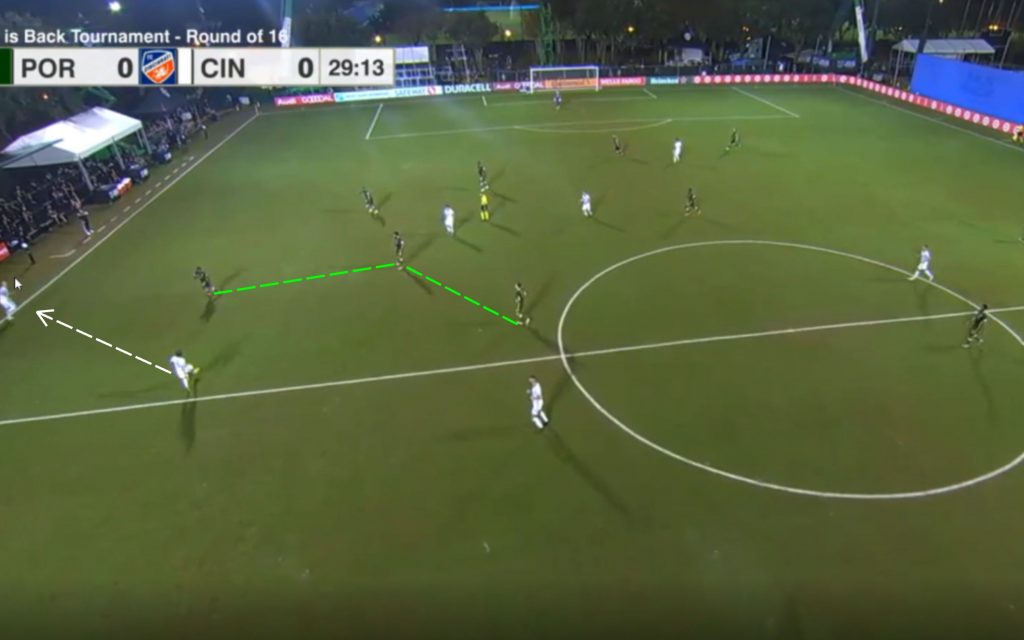 Gutman cycled the ball back to Pettersson, who once again elected to play a simple pass, this time a negative ball to Waston, instead of challenging the Portland midfielders. 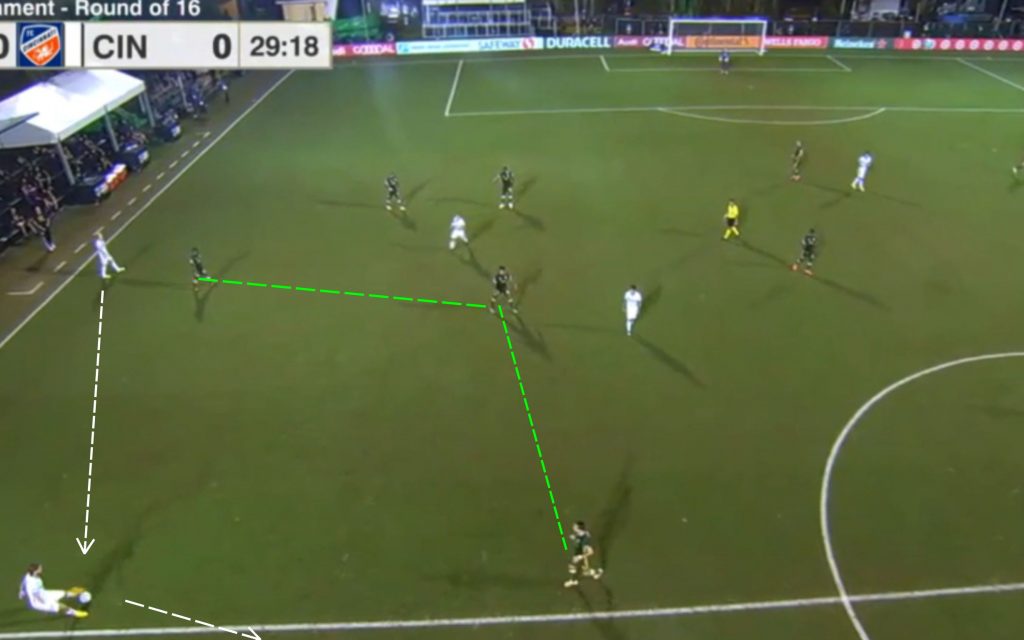 The windows for Waston were even larger, but once again no FC Cincinnati attackers were looking to make runs into them. Waston moved the ball back toward his left to Medunjanin and once again to Pettersson. 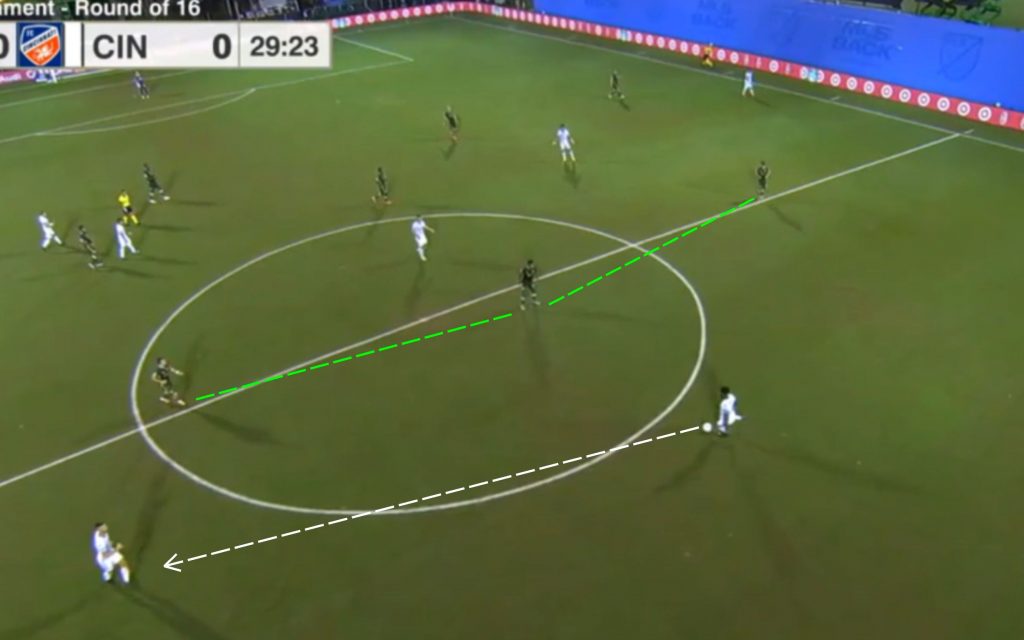 Finally, the end of this possession shows how dangerous a pass through the lines can be. Pettersson carried the ball forward and fired it into Regattin, who had finally made a decisive run into a window. Regattin bounced the ball immediately out to Stanko, who one-touched it into the path of Kubo, wide open in a gap between the Portland lines. 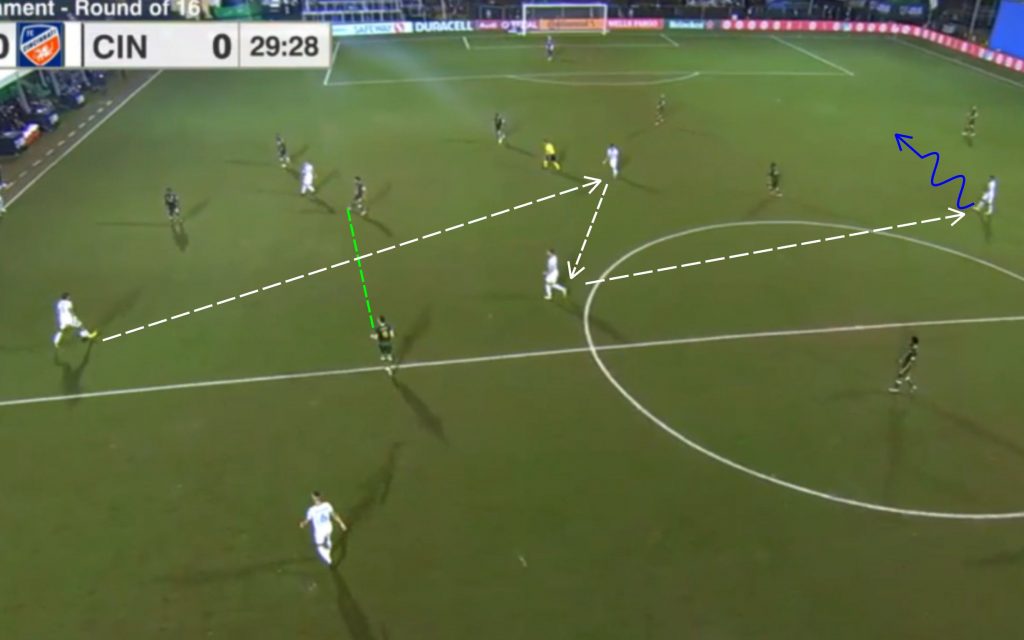 Kubo carried the ball forward and unleashed a long-range shot that was blocked. But in a passing move that lasted nearly a minute, it took only a few seconds to show how a bit of urgency and a willingness to play between the lines can create space and opportunities on goal.

FC Cincinnati was widely considered an “easy out” heading into the tournament, and even more so after losing 4-0 to Columbus in the opening match. However, steady improvement and new-found defensive steel helped it to reach the knockout rounds and take perennial playoff contenders Portland to penalties.

The defensive improvement was remarkable but came at the cost of offensive fluidity. The end of the Portland match when coach Jaap Stam shifted to a 4-3-3 with Jurgen Locadia and Siem de Jong on the field showed that better things are ahead for the Orange and Blue. Hopefully, the season will continue and we’ll get to see the rest of that develop.

Tune into the latest Talking Tactics with Coach Gough Podcast as Brad breaks down the last match with Coach Mike Welker of the Moeller High School Crusaders! Look for a new episode on your favorite podcast network each Monday!