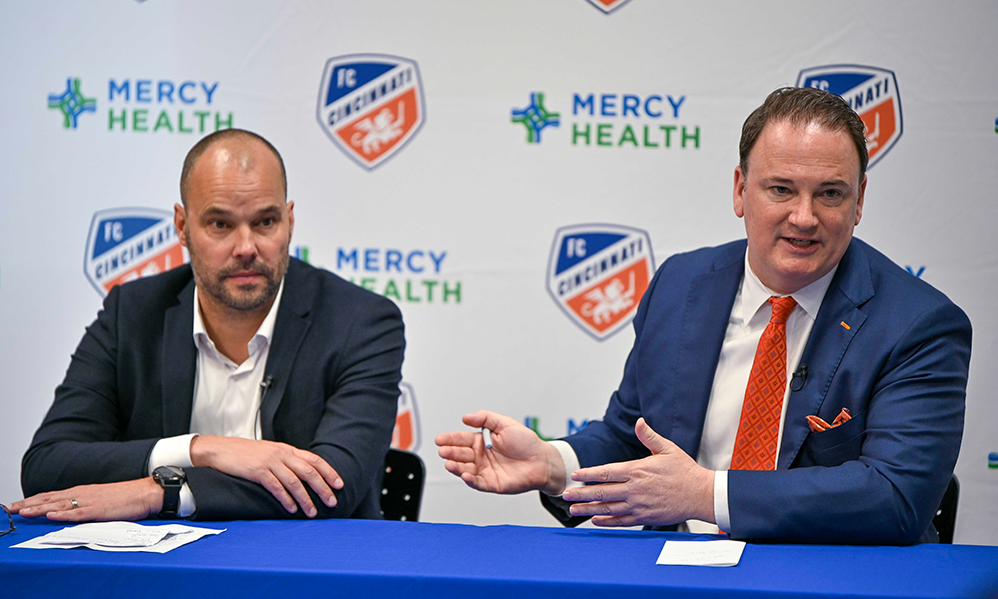 How could the 30-day suspension of MLS play because of the COVID-19 virus affect FC Cincinnati? Clay Winstead takes a look.

All sports are canceled. It sounds hyperbolic, but it’s not. In an attempt to slow the spread of the novel coronavirus disease 2019 (COVID-19), MLS has suspended play for at least 30 days.

MLS made its decision Thursday morning, following the example of the NBA, which decided to suspend its season Wednesday after a player tested positive. MLS was soon joined by Major League Baseball, the NHL and the NCAA in suspending or canceling games or tournaments.

“We need to thank our fans and our partners for their patience and continued support while this situation has evolved,” FC Cincinnati president Jeff Berding said in a club press release on Thursday. “We built our club on core values that center on supporting our community and families, and we believe this is absolutely the correct public health approach to help prevent the dangerous transmission of COVID-19 through community spread.

“As we noted (Wednesday), we support Ohio Governor (Mike) DeWine and his strong stance on limiting mass gatherings. We strongly support the league’s stance to temporarily halt the season as a precaution and have been working for several days to get to and prepare for this outcome. This is an unprecedented situation, and we look forward to further guidance from MLS, public health officials and government officials as we plot the near future.

“We want the opportunity to have a full final season at Nippert Stadium where the exciting experience and vibrant atmosphere of our supporters have created a lasting image over the last four years. But before that happens, the health and safety of our entire community — including our fans, staff and players — are of the utmost import.”

The question on every fan’s mind must be “What happens now?” It’s understandable. Berding said it himself, the situation is “unprecedented.” For now, the games against D.C. United, Toronto FC, and Atlanta United are postponed and will be rescheduled. No timetable has been set for when these games will take place, but FCC and the league have been working on contingency plans.

“The goal is that we would have a full 17-match home schedule here at Nippert,” Berding said in a press conference. “More communication will be coming out about the specifics of rescheduling, but I want to be clear to all of our fans and our partners that the goal is the league would reschedule all affected matches.”

Players will not be training this weekend either, as MLS instituted a temporary ban on all team activities. The league will use the next three days to determine whether teams can resume full practices and what protocols teams will have to use to ensure the safety of players and staff. In the meantime, players are allowed to use team facilities for individual practices.

But what happens next? That could be anyone’s guess. The U.S. Open Cup has also been temporarily suspended. For how long, we still don’t know. With MLS and USL league play delayed, it may prove difficult to reschedule their seasons and incorporate the historic cup tournament. If it is canceled, MLS will have a lot more flexibility for rescheduling. In that event, games can be moved to midweek throughout the season or tacked on at the end of the original schedule in October and November.

If the suspension ends at 30 days, FCC will play its first game back against the New England Revolution on April 11, with the home opener set for April 26. However, it’s likely the COVID-19 pandemic gets worse before it gets better. Suspending the season will help prevent spreading the disease quickly, but it will still spread. It’s possible MLS will have to extend the delay until the spread of COVID-19 is under control.

At this point, it’s difficult to discern when that will be. Even if league play is suspended until May, it’s still possible to finish a newly formatted regular season in November. But with the Concacaf Champions League delayed as well, four MLS teams will have to factor in new dates for that tournament. Extending the season that late into the fall would impact the MLS Cup Playoffs as well. It’s one domino after another, and it’ll be a big challenge for MLS to resolve.

Where does this leave FC Cincinnati? Not to make light of the situation — obviously, the safety of the players and the public are the most important — but purely from a soccer perspective, the delay will likely benefit FCC. If the Orange and Blue can avoid the virus and the self-quarantine that would demand, this new roster will have even more time to settle in and grow together. Siem de Jong, the last of general manager Gerard Nijkamp’s winter signings, only just joined the team in training.

The head coaching search will also be impacted by the delay. While they will continue their search, the process will be done remotely.

“To be fair, we probably have a bit more time because we’re not playing a game this weekend or the following Saturday and the following Sunday,” Berding said. “We have the ability to use technology and to work in a manner that would allow us to make the best long-term decision for who will be the next head coach of FC Cincinnati.”

It’s entirely possible FCC will have a new coach at the helm when they take the field next. If the team can stay healthy, having more time to train together and potentially acclimate to a new coaching staff might prove advantageous in the long run. The next few weeks will still be difficult; for the fans and the team. No one wants to miss games. Despite the uncertainty, Berding struck an optimistic tone at his press conference.

“We live in unprecedented times here,” Berding said. “There’s no way that anyone could plan for this. I’m proud of the fact that with our staff here at FC Cincinnati and our ownership group, our whole preparation for this was to be true to our values as a club and do what’s right for the community.”