Was FC Cincinnati playing conservative or playing scared? Brad Gough breaks down the film from Saturday’s 2-1 loss at Atlanta United.

FC Cincinnati interim coach Yoann Damet elected to line his squad up in a conservative 4-2-3-1 in Saturday’s 2-1 loss to Atlanta United. With compact lines and narrow wingers, the goal seemed to be to not allow the Five Stripes to play through the middle of the park. This respect shown by the visitors was enough to keep the game close,but not enough to get the win. This leaves the question: Was this a prudent game plan or playing scared?

Lined up in a 3-4-2-1 with Gonzalo “Pity” Martinez and Ezequiel Barco operating just in behind Adam Jahn as the lone striker, Atlanta United was set up to dominate the midfield. However, with FC Cincinnati’s compact lines, there was no way through. The home side instead pushed its wing backs (red highlight) ever higher, appearing to take the posture of a 3-2-4-1 with Martinez and Barco (purple highlight) free to run into the seams between the FCC center and outside backs. 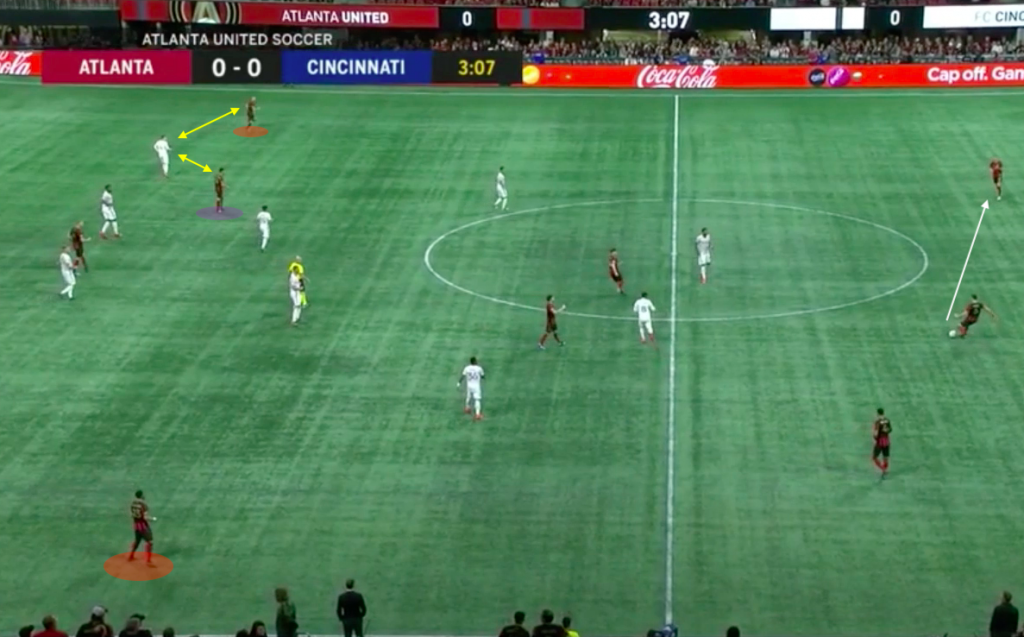 Below you can see that, as center back Laurence Wyke shapes up to make a long pass, Greg Garza must account for the Atlanta United wing-back. Barco makes a run down the seam, forcing Frankie Amaya to chase. On the opposite flank, left wing-back Jake Mulraney looks to make the seam run, leaving Martinez (not pictured) free as Mathieu Deplagne follows. 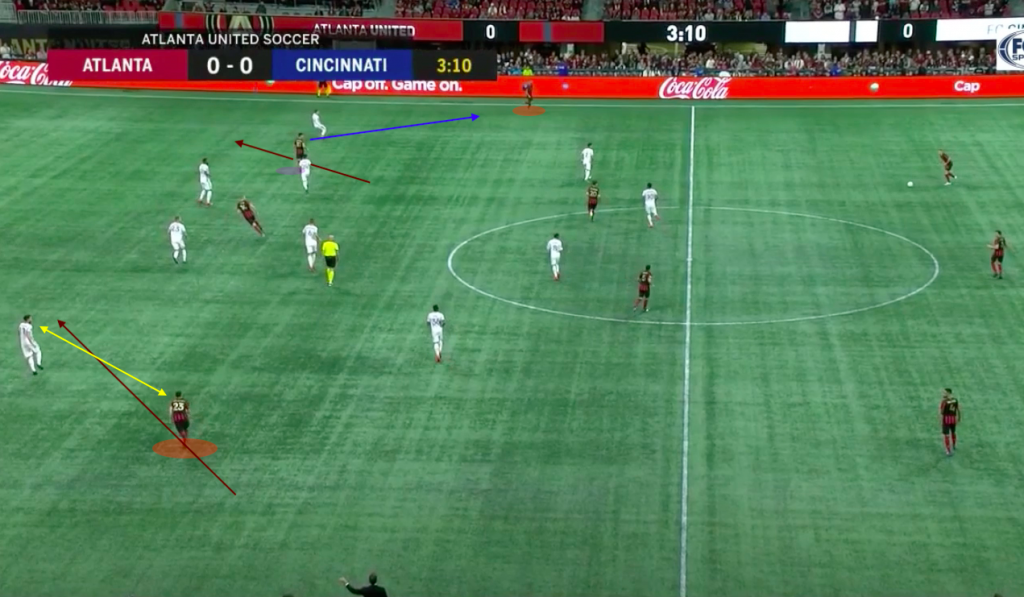 Alternatively, if FCC were not set up to defend so narrowly, Yuya Kubo could have moved out to mark right wing-back Brooks Lennon, allowing Garza to sit in the space that Barco wants to exploit. On the opposite flank, Joseph-Claude Gyau dropping wide would allow Deplagne to stay connected with the rest of his backline, accounting for both Martinez and the run of Mulraney. Amaya would then be free to step up into the midfield and help Allan Cruz defend. 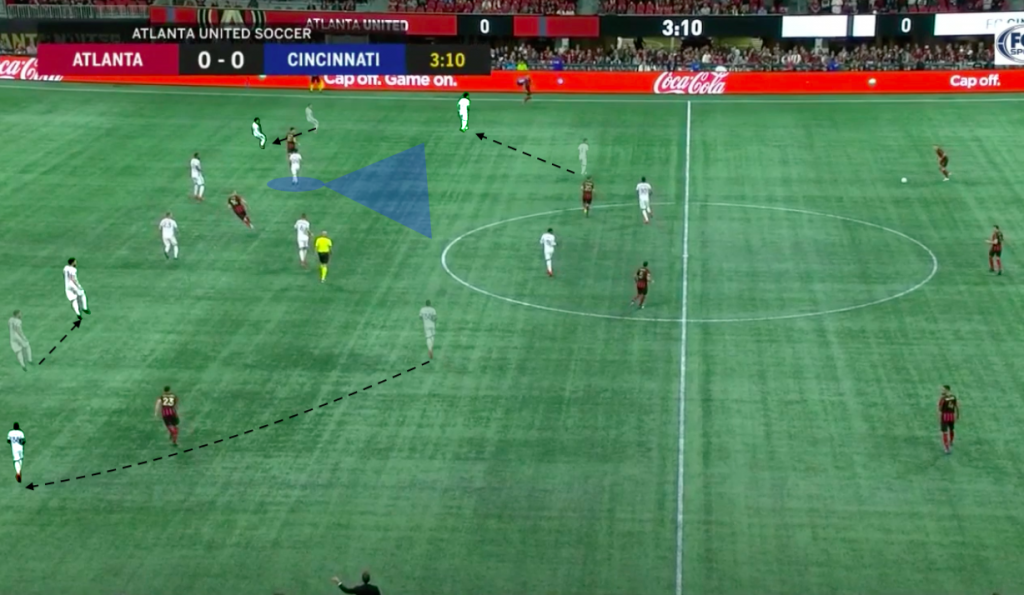 Instead, Martinez receives the long pass and immediately has a 2v1 situation with Wyke against Deplagne. Barco looks to run in behind, and because neither Amaya nor Garza views him as their responsibility, he will be uncovered. 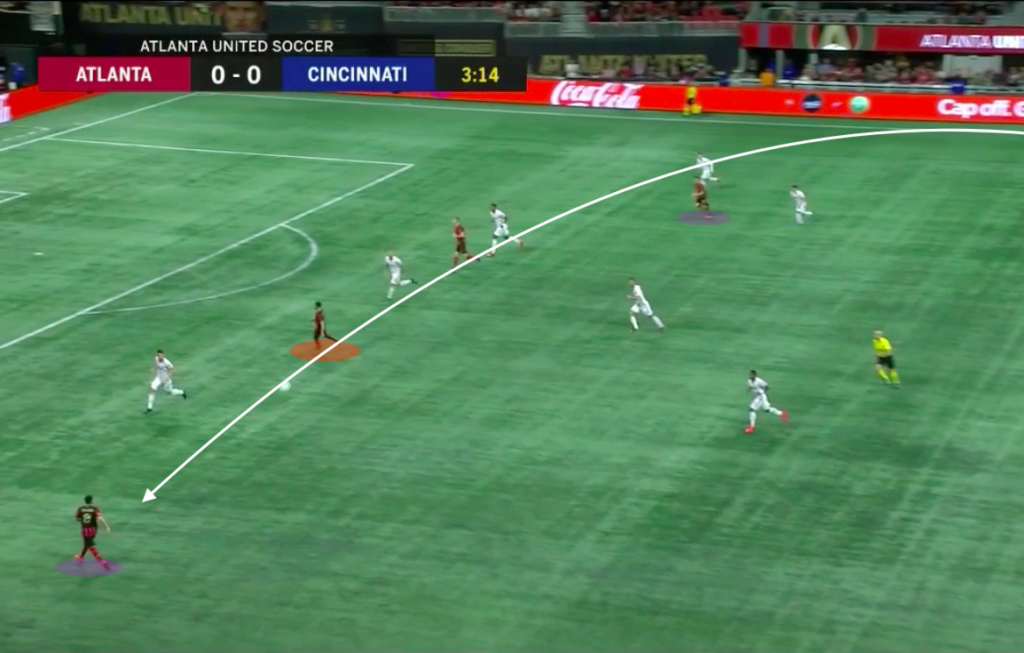 When Martinez and Barco Didn’t Run

Both Atlanta goals resulted from these seam runs by Barco and Martinez. The times in the match where Atlanta United looked stagnant going forward were the times when FCC easily accounted for the opposition wing-backs due to Martinez and Barco not present to threaten the space in behind (yellow). 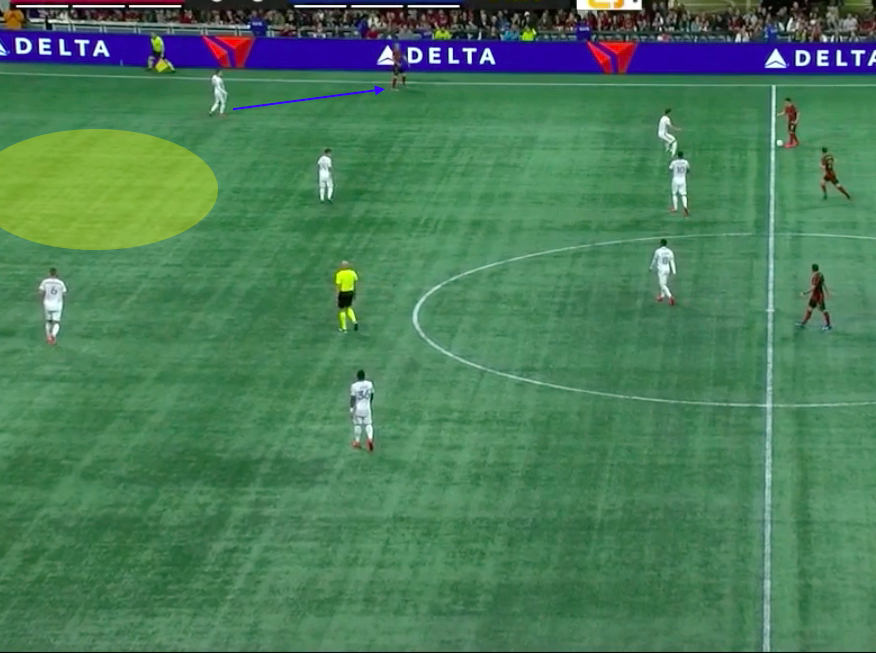 Here, with Garza covering Lennon, Atlanta United is forced to shift the ball back inside and play negatively. But even with the switch of play, Deplagne easily moves out to account for Mulraney, forcing Atlanta United to recycle the ball again. 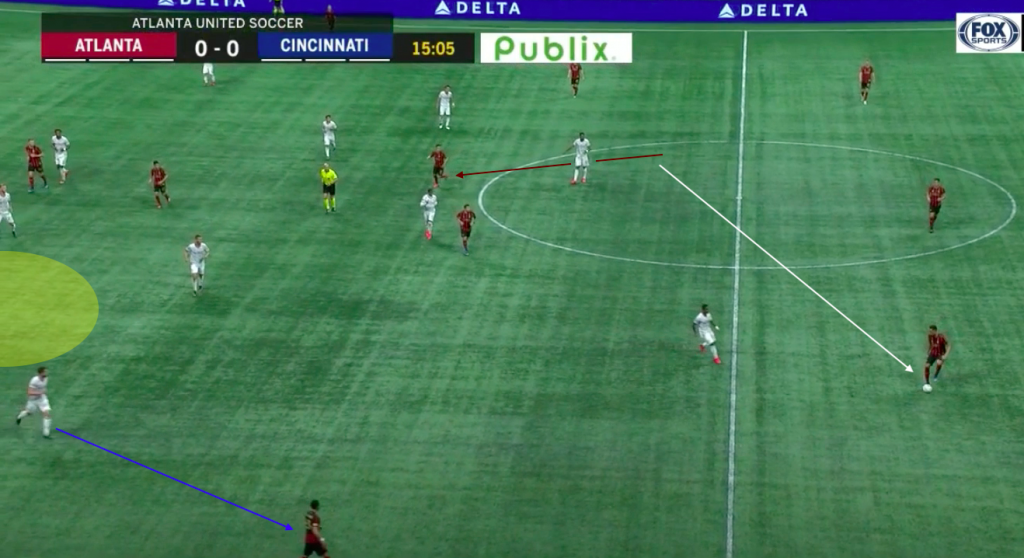 When FCC Defended the Width

When things worked perfectly in the midfield, FCC moved wide to defend the Atlanta United wing-backs. Here, we see Lennon receiving a pass and Kubo moving to press. With Amaya well-positioned to chase Barco into the seem, Garza is free to press as well. 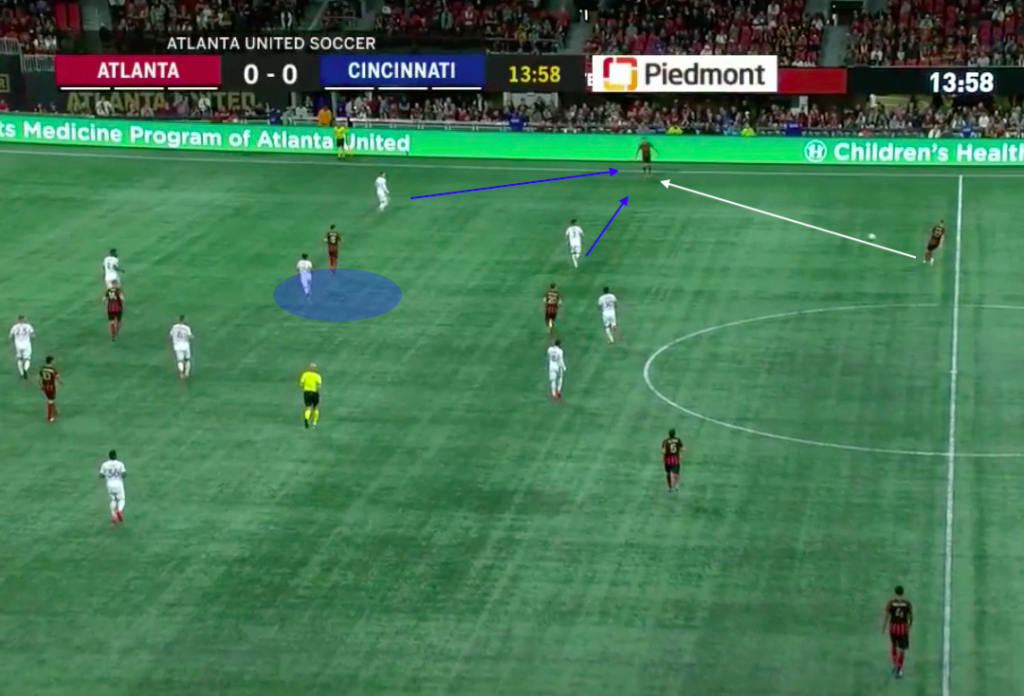 Lennon shifts the ball to Barco in tight space and moves to make a run down the line. However Kubo, Amaya and Jurgen Locadia are all in the area making space tight, and Garza did well to follow the runner. 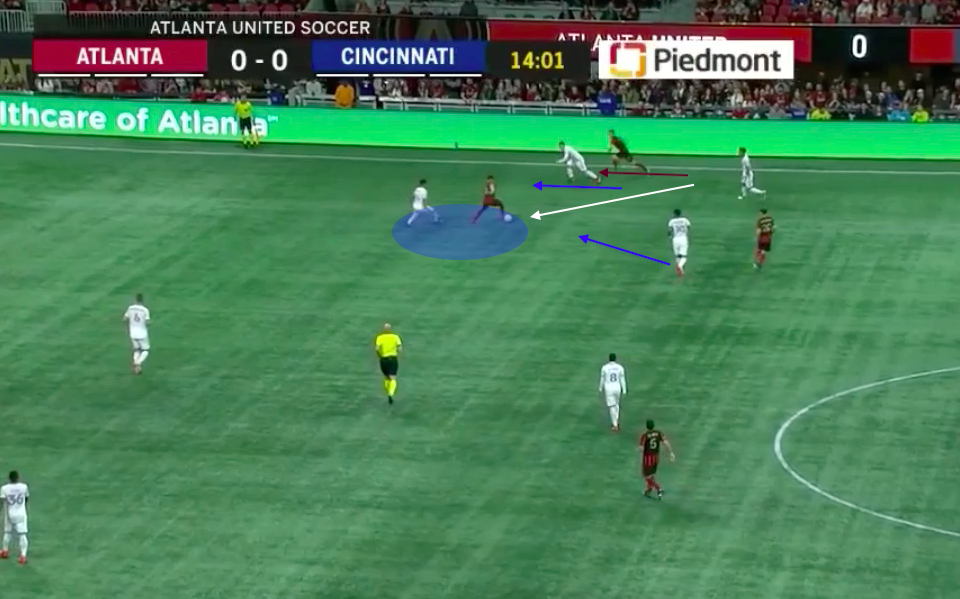 FCC quickly dispossess Barco, and with numbers around the ball it is able to keep hold of it. With Kubo (green) already positioned wide, he begins to make a run forward into space. 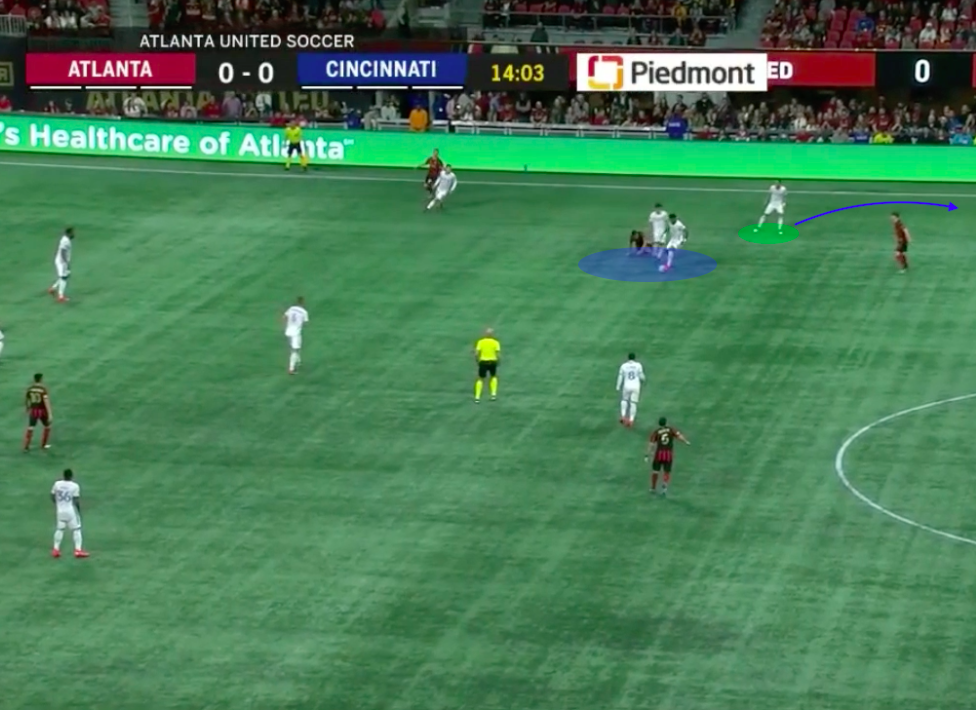 Locadia shifts the ball to Haris Medunjanin, who is able to play a line splitting pass into Kubo to start the FCC break. 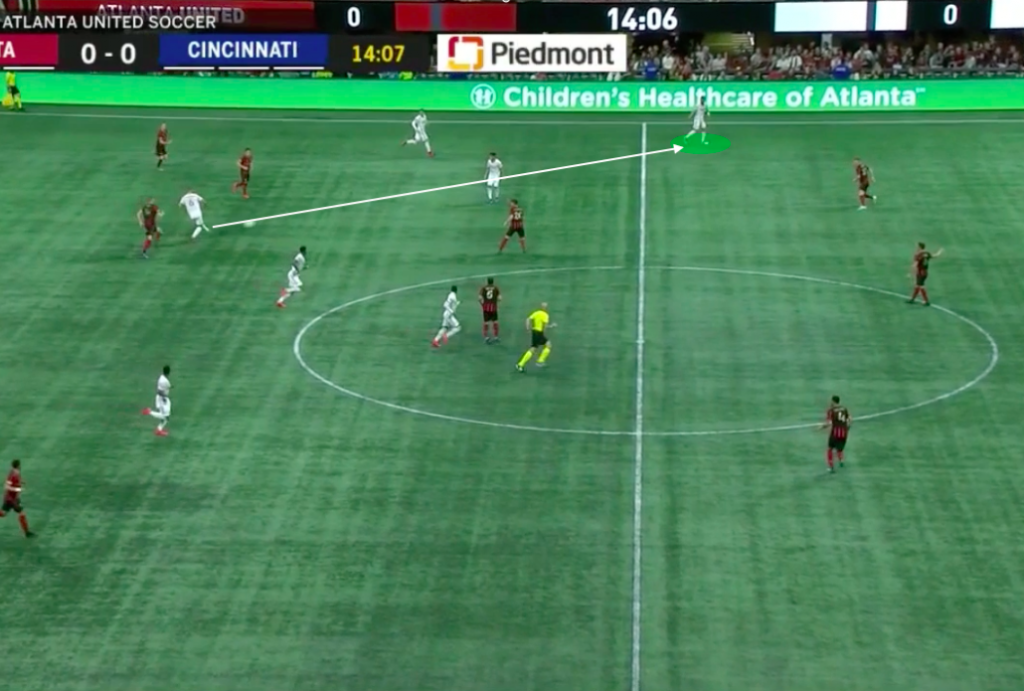 Perhaps out of fear that they would be possessed off the pitch, Damet set his team up in a very compact and narrow defensive posture. At times it appeared as if Kubo and his opposite number, Gyau, were pinched centrally with nothing to do. With Martinez and Barco making darting runs forward, FCC often had Kubo, Cruz, Gyau, and Locadia all present to defend only Emerson Hyndman and Eric Remedi.

Hopefully lessons learned from the first two matchdays of the season will allow the team to play conservatively in the home opener against D.C. United without playing scared.