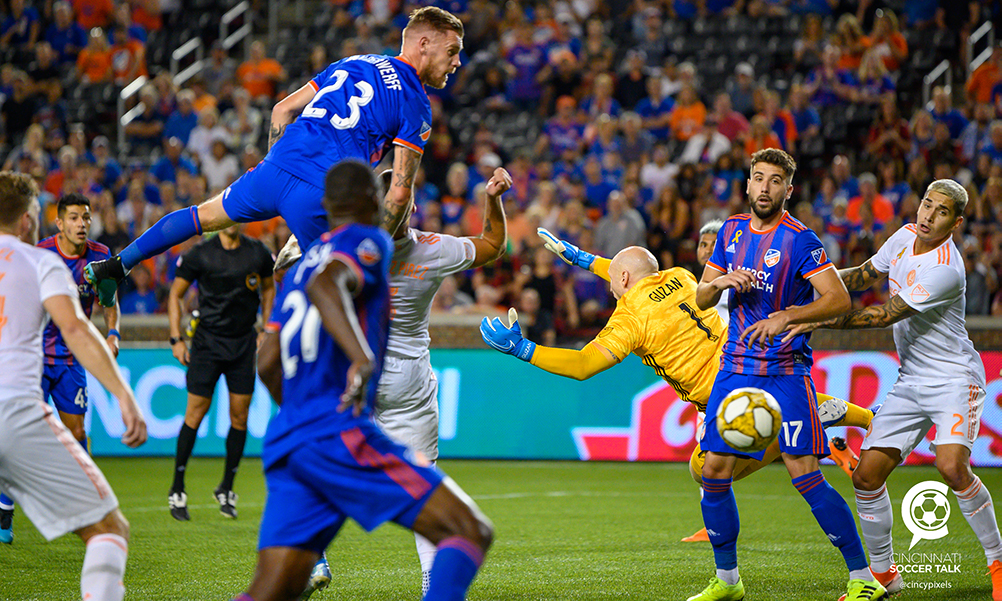 For the second straight week, FC Cincinnati couldn’t climb out of an early hole, falling 2-1 to Atlanta United at Mercedes-Benz Stadium on Saturday.

The Orange and Blue fell 2-1 to Atlanta United at Mercedes-Benz Stadium on Saturday in the Five Stripes home opener in front of 69,301. The loss keeps FC Cincinnati (0-2-0) in search of its first points of the season with the scene shifting to Nippert Stadium in a week.

“The guys played very well,” interim coach Yoann Damet said. “I’m disappointed for them tonight. They put a lot of energy, a lot of hard work on the field. I think they respected the plan really well. I think we created some chances, tried a lot.

“I’m very, very proud of the guys. The guys have showed growth from last week.”

Atlanta (2-0-0) jumps to the top of the Eastern Conference table in the early season. In its first game without 2018 MLS MVP Josef Martinez, the biggest question was where it would find offense. All three of Atlanta’s goals against FC Cincinnati in the series prior to Saturday came from Martinez.

After threatening for a bit, Ezequiel Barco punched home a cross from Gonzalo “Pity” Martinez in the 21st minute to give Atlanta a 1-0 lead.

FC Cincinnati almost equalized right before the half. Allan Cruz sent a diving header at goal, but Brad Guzan got a glove to it and knocked it away. And Yuya Kubo gave attempted service into Joseph-Claude Gyau, but the timing was off.

“Hyndman cuts back inside and just as he takes that quick touch, I’m trying to move a little bit to my left to reset on that angle, and he puts it right back down low where I was,” Richey said.

“It’s the little mistakes that comes with automatism,” he said. “The players, they have to understand each other. There is some automatism that is getting better. It’s little details in the defense on the two goals that Atlanta scored. It’s all about how we shore up and the plan — how we execute. I think the players showed that they are able to adjust to the gameplan and to apply the gameplan.”

Kubo and Adrien Regattin, entering as a sub for Gyau, had shots blocked. Then Kubo pulled one back in the 64th minute with a brilliant knuckleball strike that left Atlanta goalkeeper Brad Guzan flatfooted. It was Kubo’s first MLS goal.

“That’s exactly where I aimed, but also I didn’t expect Guzan to not move,” Kubo said through an interpreter.

Said Damet, “I’m very happy for Yuya. It took some time to get acclimated to the environment, to the team, to the playing style. Being positioned on the left side is also something that he has to deal with.”

FC Cincinnati continued its search for an equalizer. Regattin came close in the 75th minute off a backheel from Mathieu Deplagne, but Guzan made a diving save.

The difference between the club’s inaugural 2019 MLS season and this one can be seen in these comeback efforts.

“We have the sensation that sooner or later, we can score,” center back Kendall Waston said. “Last year we were lacking that. Now we have more faith. We believe more that we can create things with players we have. I keep believing in this group.”