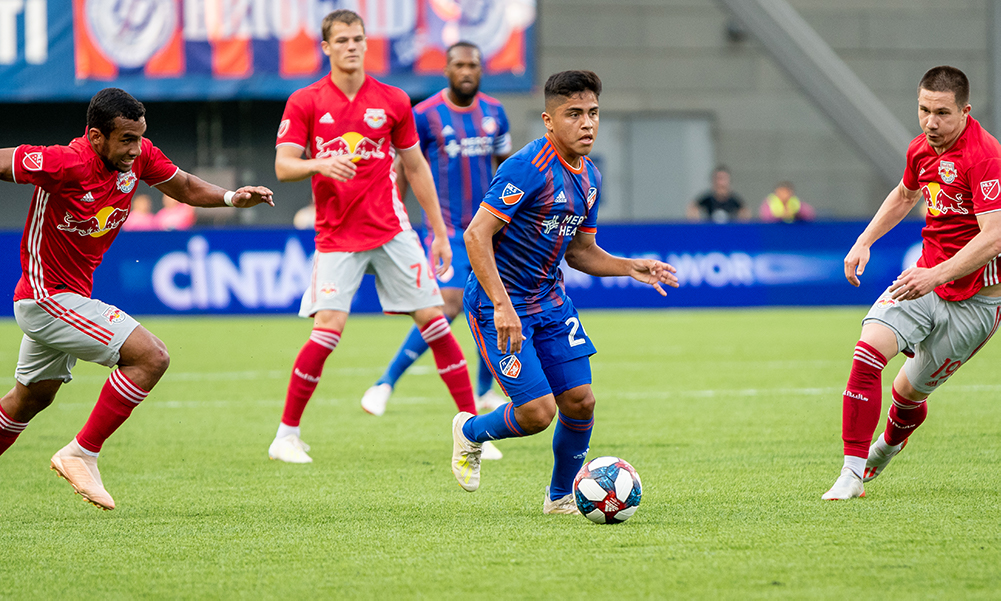 FC Cincinnati begins its 2020 season with a trip to the New York Red Bulls on Sunday. Here’s a preview of what to expect from both sides.

Anxiety is building in Harrison, New Jersey, as everyone anticipates the beginning of another MLS season. It’s only the second in FC Cincinnati’s short history, but it follows the most tumultuous off-season it’s endured. The hosts, New York Red Bulls, are dealing with a transition of their own. Both are attempting to forge a new path forward after some important departures: FCC mired in the resignation of head coach Ron Jans, and NYRB reckoning with the departure of club icons.

These changes beget important questions that need answering. For FCC, does the departure of Jans negate all the impressive player additions from this winter? And will Red Bulls be able maintain their identity without players like Luis Robles, Bradley Wright-Phillips, and Kemar Lawrence.

Both teams will be motivated to prove themselves when the season kicks off at 1 p.m. Sunday at Red Bull Arena. With the preseason over, there is no more time to second-guess and contemplate the answers in theory. Now the two sides have to walk on the pitch and find out. Players and fans are eagerly awaiting a release for their anxiety.

The Orange and Blue head into the new season after finishing as the worst team in MLS last year, setting a record for most goals allowed in MLS history. Committed to leaving these results in the past, FCC general manager Gerard Nijkamp overhauled the roster. Thirteen members of last year’s roster are gone, and 10 new players were brought in including three Designated Players (Yuya Kubo, Jürgen Locadia, and Siem de Jong) and veterans Adrien Regattin and Haris Medunjanin.

While the starting defense could look familiar, interim coach Yoann Damet will likely run out an entirely new offense. Whether or not the new personnel can click will determine the result for FCC. Kubo and Regattin have returned to Cincinnati after finalizing their visa paperwork and should be available for selection. Locadia was expected to be traveling from the Netherlands by Thursday, however there have been no updates on his arrival as of Friday morning. De Jong will certainly not be in New York but is hoping to be available for Atlanta next week.

Tactically, this match could be beneficial for FCC. Red Bulls still aspire to press high and often on defense, so look to see if FCC can successfully counterattack to gain chances on goal. The player to watch is Medunjanin, arguably the league’s best passer last season. If he can deliver the ball into open space on the wings, FCC’s new wide attackers may give Red Bulls some trouble. But if Locadia is absent from the roster on Sunday — or on limited minutes — others will have to step up. Look out for Brandon Vasquez, who has plenty of talent but couldn’t find playing time behind Josef Martinez in Atlanta.

New York is coming off a disappointing season of its own, though not quite as extreme. After setting the record for league points total on their way to the Supporter’s Shield in 2018, NYRB dropped to sixth place last year and lost in the first round of the MLS Cup Playoffs. FCC would be thrilled with such a finish, but fans of New York Red Bulls have come to expect excellence and want more out of head coach Chris Armas and his team.

Their off-season has been more defined by the players who have left than the players they brought in. Long time club captain and legendary MLS goalkeeper Luis Robles was not resigned by Red Bulls. Bradley Wright-Phillips, the club’s leading goal scorer, also had his contract expire this winter. Starting fullbacks Kemar Lawrence and Michael Amir Murillo both transferred to RSC Anderlecht in Belgium. Red Bulls have made a couple signings but haven’t spent big like FCC, opting to promote players from their academy and New York Red Bulls II instead.

But don’t expect FCC to run away with this match. New York is 107-27-34 at Red Bull Arena in the MLS regular season, the best home record since the stadium was built in 2010. While some of its big-name talents have moved on, this team has a system and they know how to play it well. FCC was very susceptible to aggressive defenses last season, and it remains to be seen whether it has improved in possession since then. One errant pass and Red Bulls could steal the ball and score before Cincinnati’s defenders have recovered. FCC will have to be smart with the ball if it wants to limit New York’s chances.

Watch out for Aaron Long and Tim Parker; the United States men’s national team regulars are the backbone of their defense and should provide stability for New York. And on offense, keep an eye on Kaku. The Red Bulls offense lives and dies by their creative playmaker. He’s got the talent, but has he matured enough to lead the team?

Sunday could be an important day for FCC. Few expect a hot start of the Orange and Blue, even if Locadia and de Jong were playing a full match. But a good display and a competitive score line could lift the team’s spirits and help shake off the anxiety and dread that permeates the club. No pressure.