Our Brad Gough steps back into the film room to break down what new FC Cincinnati striker Brandon Vazquez can add to coach Ron Jans’ system — and what Vazquez still needs to work on.

FC Cincinnati made waves on Tuesday night by acquiring American forward Brandon Vazquez in a trade with Nashville.

There isn’t a ton of film on Vazquez, as he only clocked 637 MLS minutes for Atlanta United last season. In those minutes, he managed two goals and one assist. Many have called the move a slam dunk, touting his age (only 21) and potential as evidence of his low risk, high reward profile. Others have called the move a shot in the dark, claiming his lack of minutes and subsequent lack of production makes him an unproven asset for a team that needs a proven goal scorer.

As a coach, I often recruited college athletes based on limited exposure. So, what do I see when I watch film on Vazquez?

Vazquez measures in at 6 feet, 3 inches, 196 pounds. Simply put, he looks the part of a target striker. His size and strength give him the ability to hold up against MLS center backs and be a threat as an aerial presence in and around the box. For comparison, Fanendo Adi is an inch taller than Vazquez but weighs only 185 pounds. The Dutch 4-3-3 that coach Ron Jans and general manager Gerard Nijkamp have implemented in Cincinnati requires a target striker up front, and Vazquez has the physical tools to serve in that role.

A target striker in the 4-3-3 system is more than just a goal scorer. When played correctly, the target needs to be the offensive focal point for a team, constantly presenting passing options, moving to pull defenders out of shape and bringing his teammates into moves with combination play. On film, Vazquez shows the raw tools it takes to serve as such a focal point. Take this play in Atlanta United’s match against the San Jose earthquakes, where Vazquez creates a golden scoring opportunity for Emerson Hyndman: 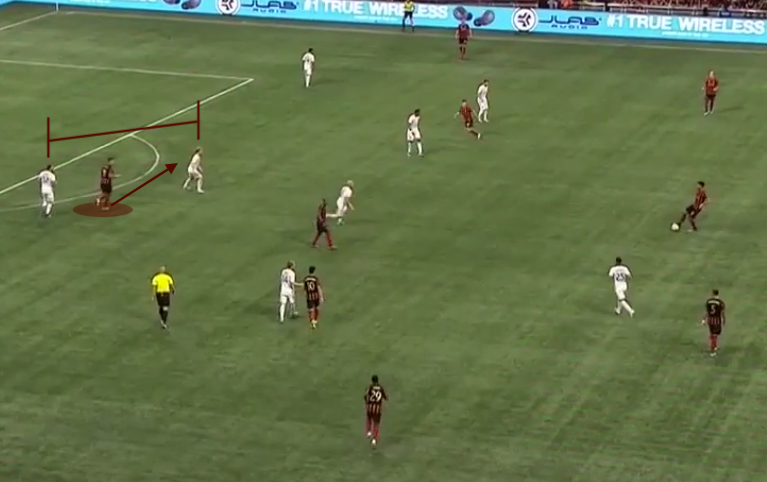 As Pity Martinez finds Vazquez in the window, Hyndman makes a run in behind the San Jose defense. Vazquez allows the pass to run between his legs, flicking it into the path of Hyndman. This sequence shows Vazquez at his best, using his movement and acuity on the ball to bring his teammates into the action. He averaged almost 23 passes per 90 minutes in 2019 playing on a team with superstars such as Josef Martinez, Ezequiel Barco and Pity Martinez, showing he has what it takes to remain consistently involved as a focal point of an offense.

The sequence above shows Vazquez’s understanding of where to post up to receive a pass with his back to goal, but a true target forward in a 4-3-3 needs to know when to make the run in behind as well. This sequence in Atlanta’s match against New York City FC epitomizes this: 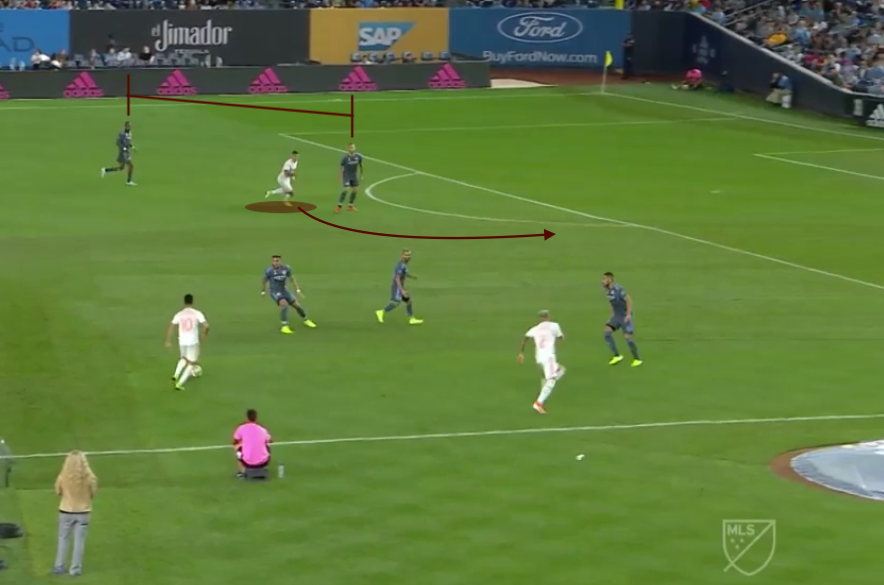 Again, Vazquez begins his run from in between the center backs, making it harder to track. He curls his run to avoid straying offside and presents a passing option for Pity Martinez in behind the NYCFC back line. 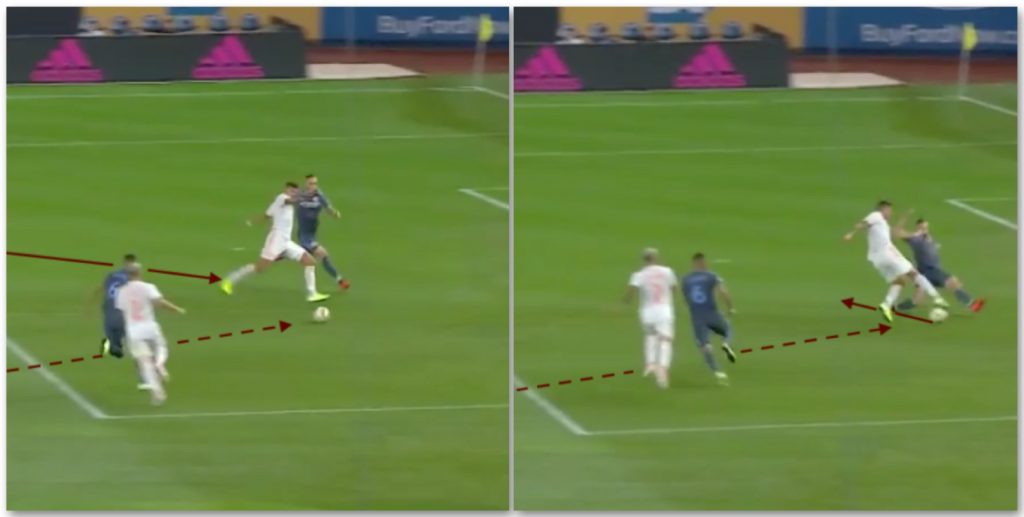 The movement here is excellent, but the images above show the true upside of Vazquez. As the ball runs into the penalty box, Vazquez holds off the covering defender, then cuts the ball back in a smooth, singular motion, leaving the defender no choice but to take the standing leg earning his team a penalty.

But the Jury is Still Out

The things that give me pause about Vazquez are less about the weaknesses that I’ve spotted on film and more about things I’ve yet to see him do. The role of a target forward as the first line of defense, pressing or funneling the ball into areas where his teammates can press, is essential. Vazquez hasn’t had the opportunity to show that he can maintain this discipline and intensity on the defensive side of the ball.

Consistent finishing at the top level is the other question looming over the young American’s head. Accumulating only two goals in his 637 MLS minutes leaves this open for debate. He has, however, shown that he can score in U.S. Open Cup play and at the youth international level. However, can he become a consistent scoring threat at the MLS level over the course of a full season?

Vazquez has the size and strength to be a successful target striker. His movement is good, and he displays good feet when receiving the ball in tight spaces. He is also a good passer and maintains his poise in front of goal. He needs to continue to develop his transitional play, as he struggles to be decisive while playing off the ball on the break. The jury is still out on whether he can consistently put the ball in the back of the net at the MLS level, but at only 21, he has the time to prove himself in that area.

In Vazquez, I believe FC Cincinnati has a young, up and coming target forward that can thrive in Jans’ 4-3-3 system.