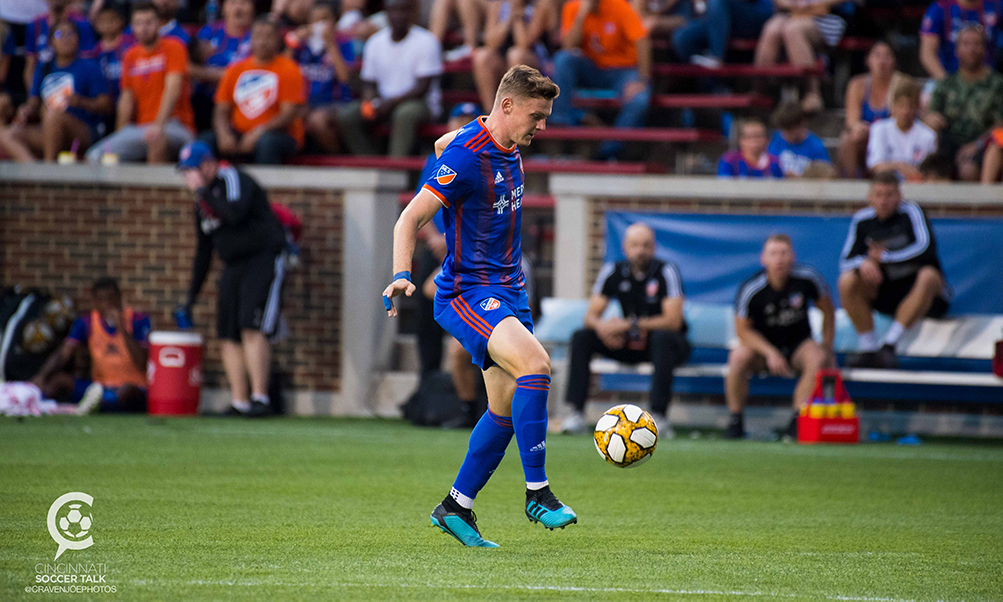 Though he was out on loan for part of the season, SuperDraft pick Tommy McCabe did log some minutes in FC Cincinnati’s midfield. Here’s a look back at the club’s SuperDraft picks and how they performed this season.

The MLS SuperDraft is an opportunity for MLS clubs to add depth and build up their rosters, and first-year club FC Cincinnati took advantage of the draft, adding six players. With Inter Miami CF and Nashville SC set to start MLS play next season, the 2020 MLS SuperDraft will be just as important for those clubs to build their rosters. With the changes that were made on the soccer side in the front office, the SuperDraft in January will take on a different challenge for FC Cincinnati. We will now take a look back at the picks FC Cincinnati made and how they fared during the 2019 season.

Frankie Amaya had an up and down season for the club in 2019. Amaya, who was a highly touted midfielder coming out of UCLA and the U.S. Under-20 team, was snagged by FC Cincinnati as the first overall pick in the draft. FC Cincinnati sent Amaya on loan to Orange County SC of the USL Championship, where he spent a few games there before being recalled from his loan. Amaya played in two matches for the USL Championship side before his return to the Queen City. His time in MLS wasn’t as productive as many had hoped though. In 21 matches in all competitions for FCC, Amaya was held off the scoresheet but did manage to get two yellow cards this season. 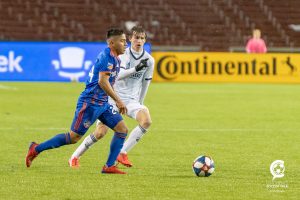 Photo Credit: Jeremy Miller/Frankie Amaya in his first appearance for FC Cincinnati on March 30 against the Philadelphia Union.

FC Cincinnati chose defender Logan Gdula 13th overall, its second pick in the first round. Gdula, who was a quality defender at Wake Forest, was sent out on loan to USL Championship sides Phoenix Rising and Hartford Athletic for the 2019 season. Gdula did not see any time for Phoenix but did feature in 16 games for Hartford Athletic, scoring once during that span. In 2019, Gdula played in 1,371 minutes for Hartford Athletic and racked up four yellow cards to go along with his goal.

In the second round of the SuperDraft, FC Cincinnati took three players. The first player taken was a defensive midfielder from Notre Dame, Tommy McCabe. After the draft, McCabe was loaned to North Carolina FC of the USL Championship. McCabe featured in nine matches for NCFC, scoring twice during 742 total minutes played under former U.S. men’s national team coach Dave Sarachan. After a rash of injuries and international appearances for players from the first team, FC Cincinnati recalled McCabe. During his time in Cincinnati, McCabe made six appearances for the Orange and Blue. Between both clubs, McCabe played a total of 985 minutes.

With the very next pick in the SuperDraft, FC Cincinnati took a goalkeeper from Michigan State, Jimmy Hague. Hague stayed with FC Cincinnati throughout the entirety of its inaugural MLS season. Hague served as the third goalkeeper behind Spencer Richey and Przemysław Tytoń. Hague did not see any action this season between the sticks for the Orange and Blue.

FC Cincinnati took another goalkeeper in the second round, this time a German from the University of Akron, Ben Lundt. Lundt was sent on loan to FC Cincinnati’s most hated rival, USL Championship side Louisville City, for the 2019 season. Lundt battled some injuries during the season but played in 12 games for the two-time defending USL Cup Champions. In his 12 matches with Louisville City, Lundt conceded 11 goals but did notch four clean sheets.

Rashawn Dally was the final pick for FC Cincinnati in the SuperDraft, taken 49th overall. Dally, a forward/midfielder from Quinnipiac University, saw the most MLS action behind Amaya. After the preseason wrapped up, Dally was loaned to Memphis 901 FC of the USL Championship where he stayed until May. During his time at Memphis, Dally scored a goal and accumulated two yellow cards. However, like a few of his counterparts, due to the international break and injuries suffered by the club, FC Cincinnati recalled Dally from his loan. He stayed with the MLS side, starting eight matches and featuring in 12 total. Dally did score his first career MLS goal in a 3-2 victory over the Houston Dynamo at Nippert Stadium. Dally played 1,306 minutes in 2019 over 24 games with Memphis 901 and FCC in all competitions. 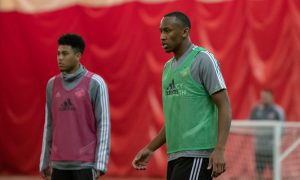 As always, make sure to stay tuned to Cincinnati Soccer Talk for up to date news on FC Cincinnati as it prepares for the 2020 MLS campaign.