Brad Gough breaks down the goals scored Sunday in FC Cincinnati’s 1-1 draw with Orlando City SC in this week’s edition of How They Happened.

FC Cincinnati uncharacteristically took a first half lead before giving up an all-too familiar stoppage time goal to draw Orlando City SC 1-1 on Sunday, eliminating the Lions from the playoff race. Here is a look at both goals scored.

Allan Cruz’s 40th minute goal was an absolute thing of beauty involving some real creativity and skill from the parties involved. The move began with a simple ball to Joseph-Claude Gyau on the left sideline. Greg Garza, forward from a prior run, stayed active in moving toward the corner. This forced right back Ruan to track his run giving Gyau space in which to operate. 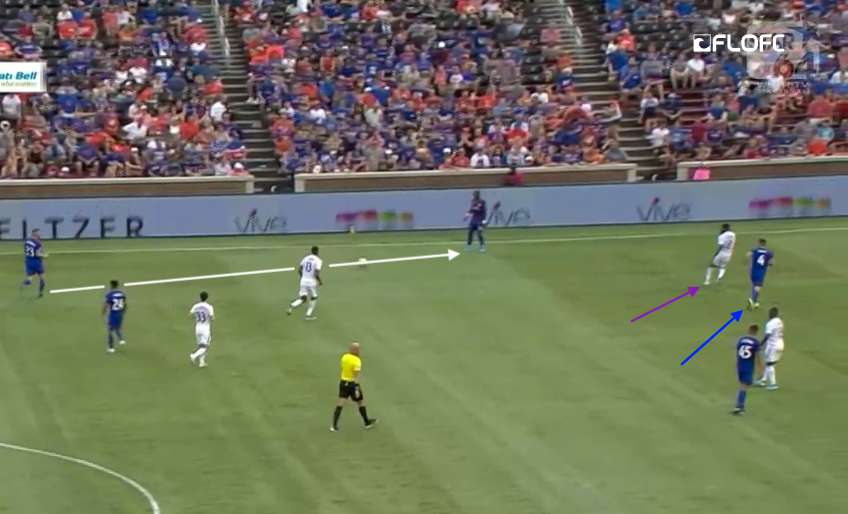 Seeing that he wasn’t going to get the ball played to the corner, Garza checked back toward the ball, freeing up an avenue for Emmanuel Ledesma to check into. Gyau showed a real piece of skill here chipping a perfect ball into the path of Ledesma with just the right amount of back spin to keep the pass from rolling out of bounds. 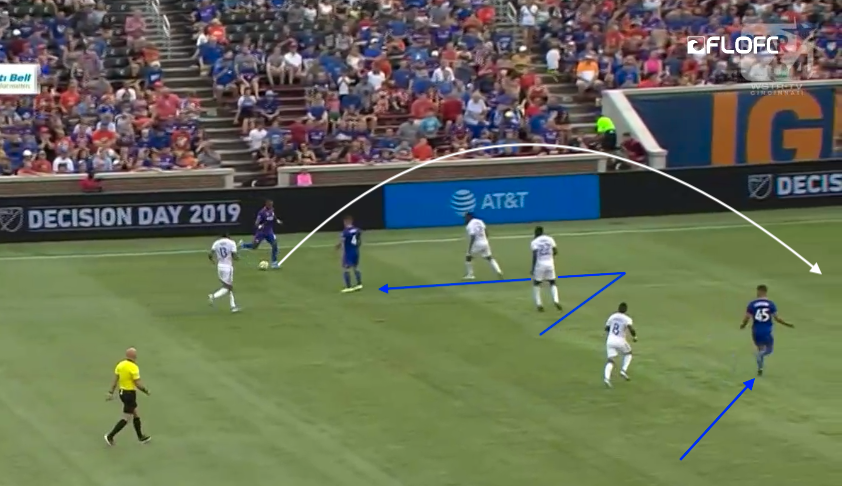 As Ledesma tracked the pass in from Gyau, Roland Lamah made a decisive near post run, forcing the Orlando City defense to collapse in. Allan Cruz creatively moved into the window of space near the penalty spot created by Lamah’s run. 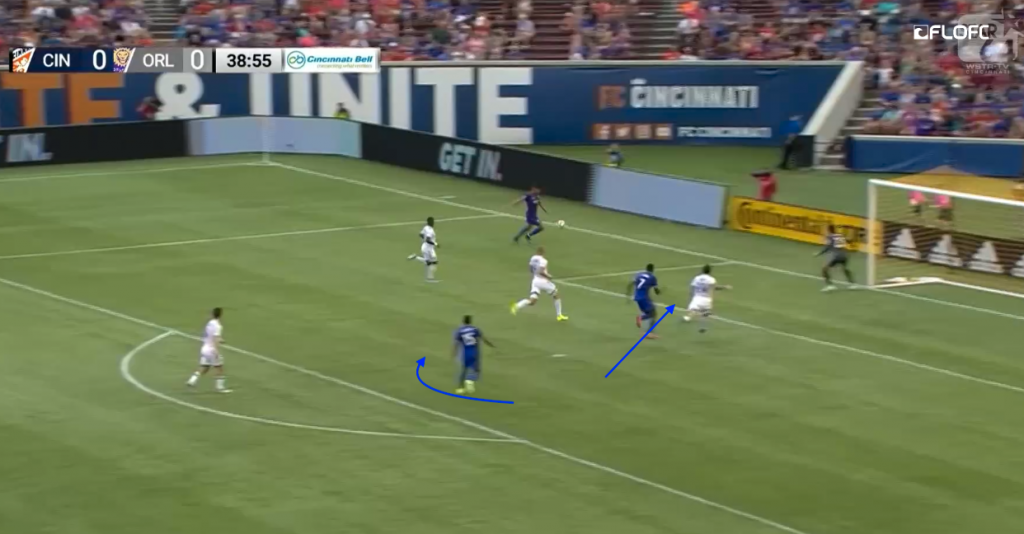 Ledesma cut the ball back expertly for Cruz. Then, it cannot be overstated how important it was for Cruz to direct his finish back toward the near post. Lions goalkeeper Brian Rowe threw his body toward the far post expecting Cruz to attempt his shot in that direction. By finishing at the near post, Cruz allowed the momentum of the ball to aid in his shot and caught Rowe off-guard. 1-0 to FC Cincinnati. 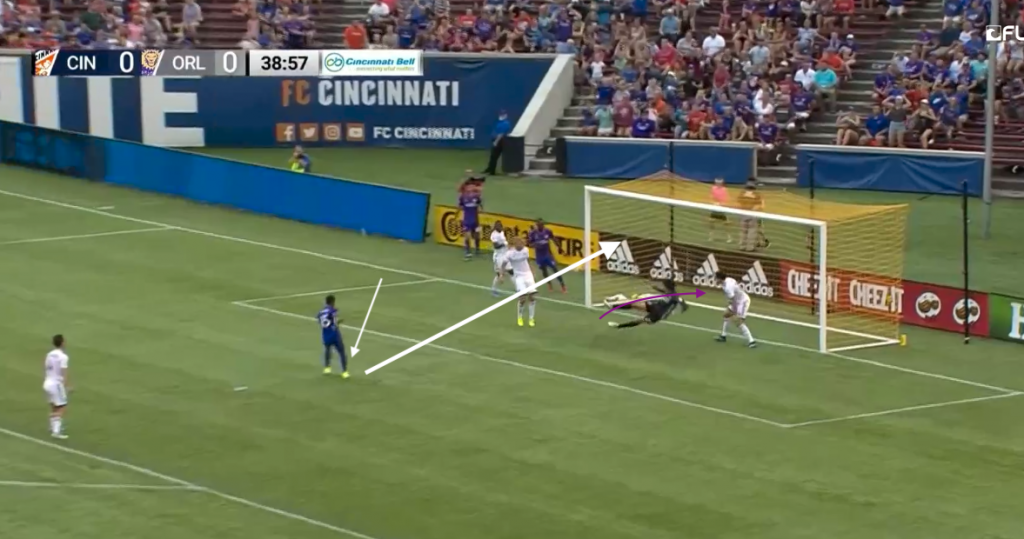 FC Cincinnati has given up a shameful number of goals in the last five minutes of either half, and Sunday added another to the tally. As Orlando City pressed for the equalizer, FCC’s midfield triangle sat deep but maintained good shape. However, as Wil Johnson found Dom Dwyer just in front of the backline, things began to deteriorate. 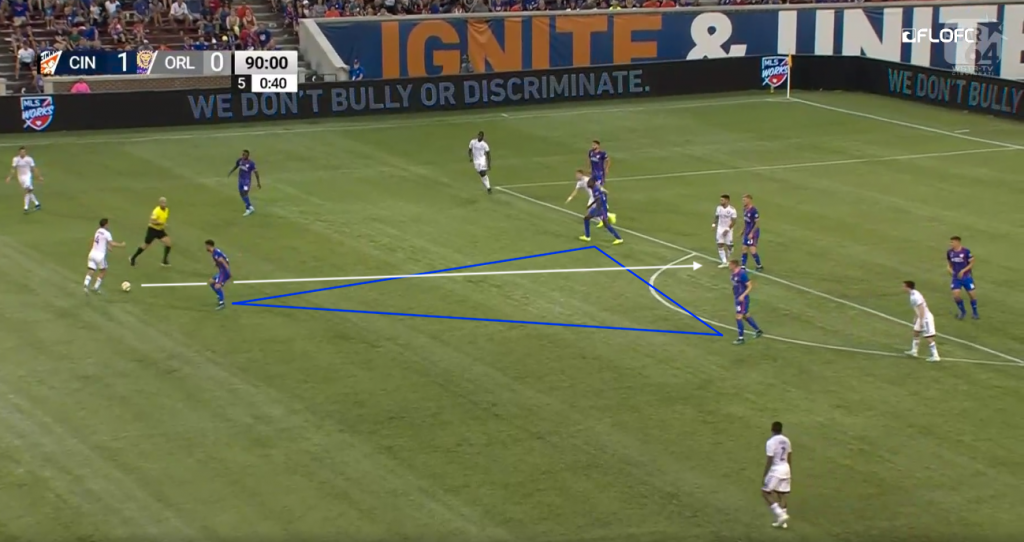 Maikel van der Werff stayed tight to Dwyer, not allowing him to turn. Nick Hagglund correctly slid over to cover van der Werff. Every time the backline is forced to shift to account for a ball played in, it is incumbent upon the defensive midfielders to drop in to cover the space created between defenders. Tommy McCabe failed to do this, creating the opportunity that the Lions needed to start the FCC defense scrambling. 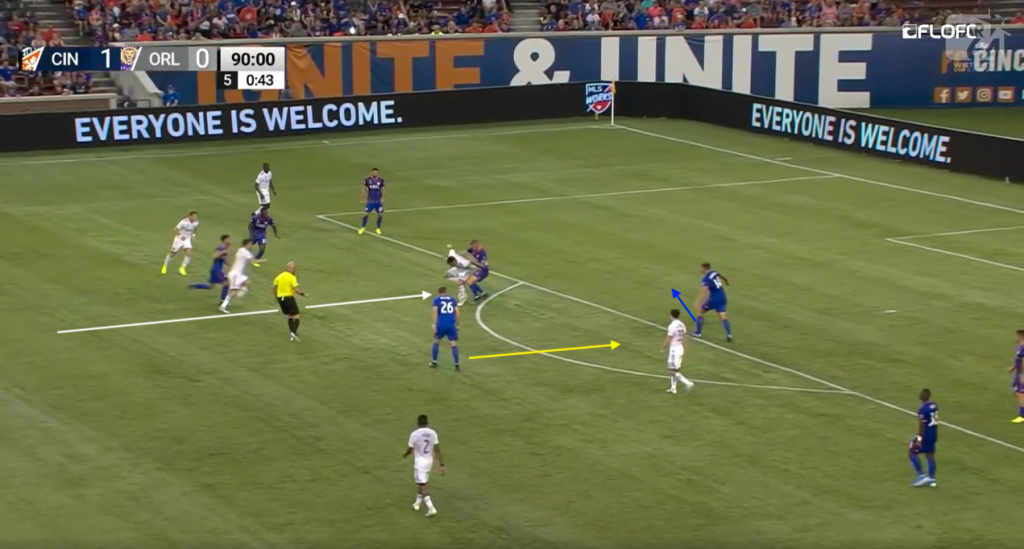 Because McCabe failed to drop, Dwyer found Mauricio Pereyra in a gap in the defense. Hagglund moved to challenge, and Garza correctly dropped to cover, but Gyau was forced to stay narrow to marshal Ruan instead of beginning to stretch wide to account for Nani on the right wing. 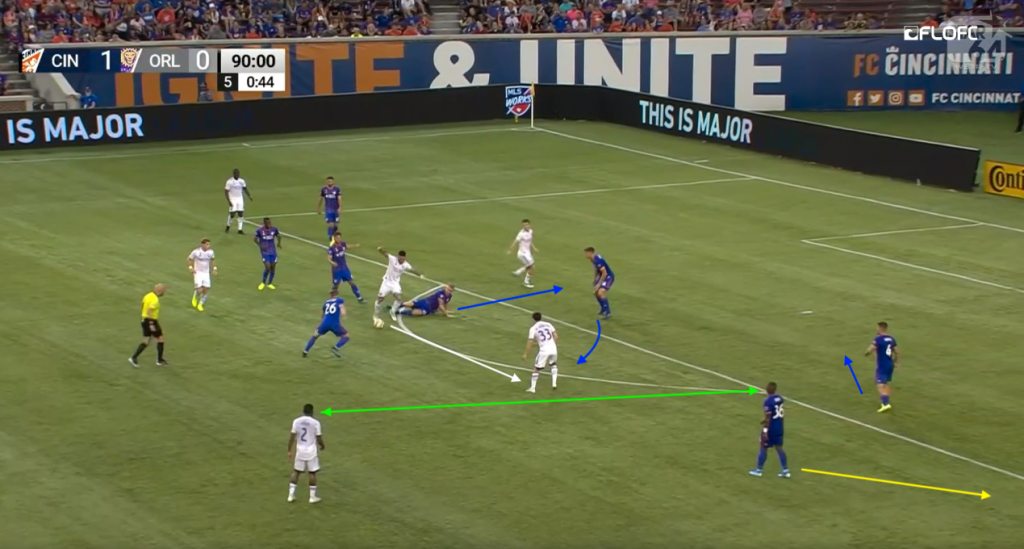 As Pereyra found Nani, Gyau and Garza quickly shifted into position to limit the danger. Once again, as Garza shifted and van der Werff moved into position, the midfield failed to drop into the backline. Without this, Mathieu Deplagne shifted inside, leaving eventual goal scorer Benji Michel unaccounted for. 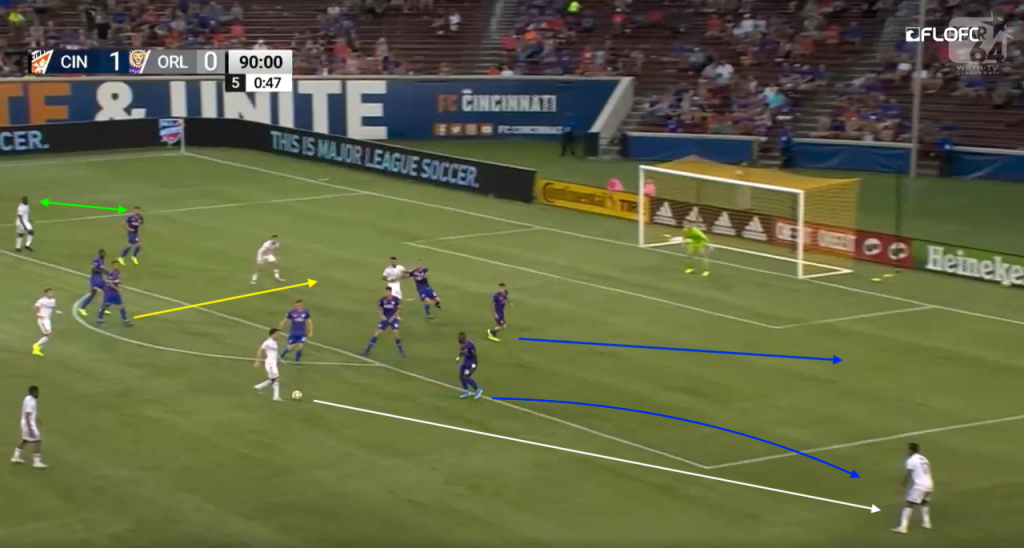 Nani took Gyau to the goal line and clipped the ball into the back post. Because the defense was in scramble mode, Dwyer found space between Deplagne and van der Werff, who should have been goal side of the American striker. 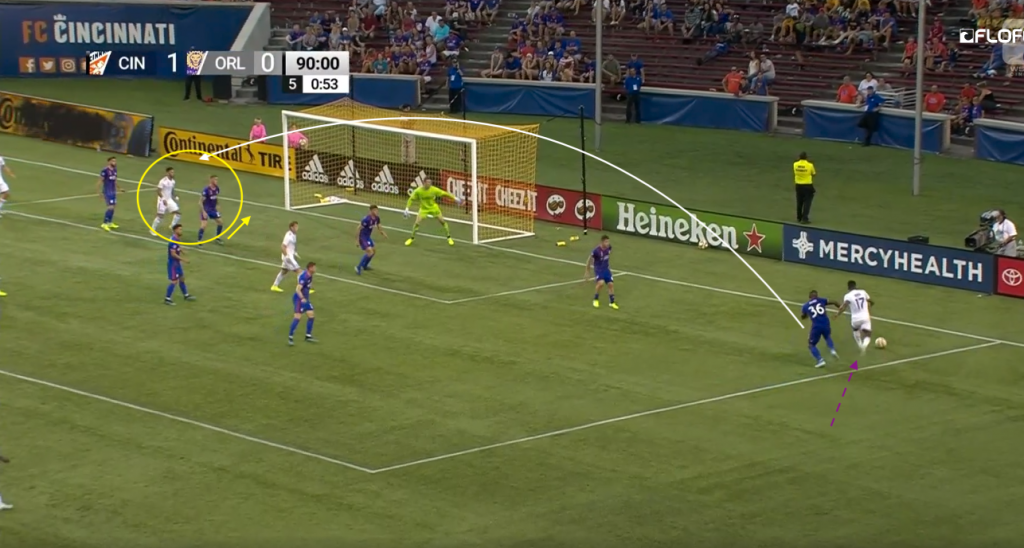 Caught slightly out of position, the ball sailed over van der Werff toward Dwyer, and Deplagne was forced to challenge for the ball while van der Werff dropped to the near post. Leonardo Bertone and Fatai Alashe were caught ball-watching as Dwyer got enough contact to knock the ball down to Michel, who buried the chance. 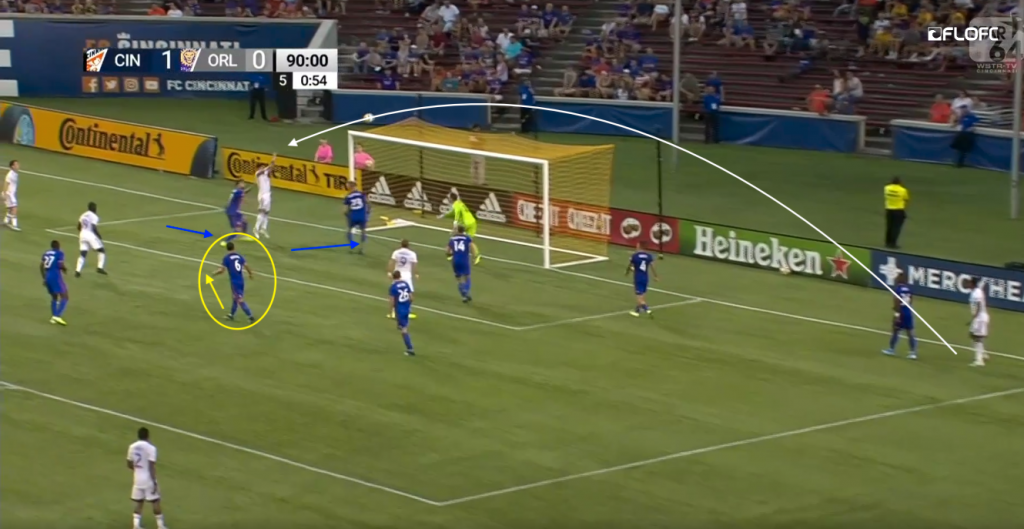 At this stage of the season, FCC can’t be too disappointed with a draw to a team that was in the playoff hunt. Furthermore, it would have felt good to know that the stalemate eliminated Orlando City from contention. That said, leaking late goals will be something that Ron Jans and company will have to address in the off-season.