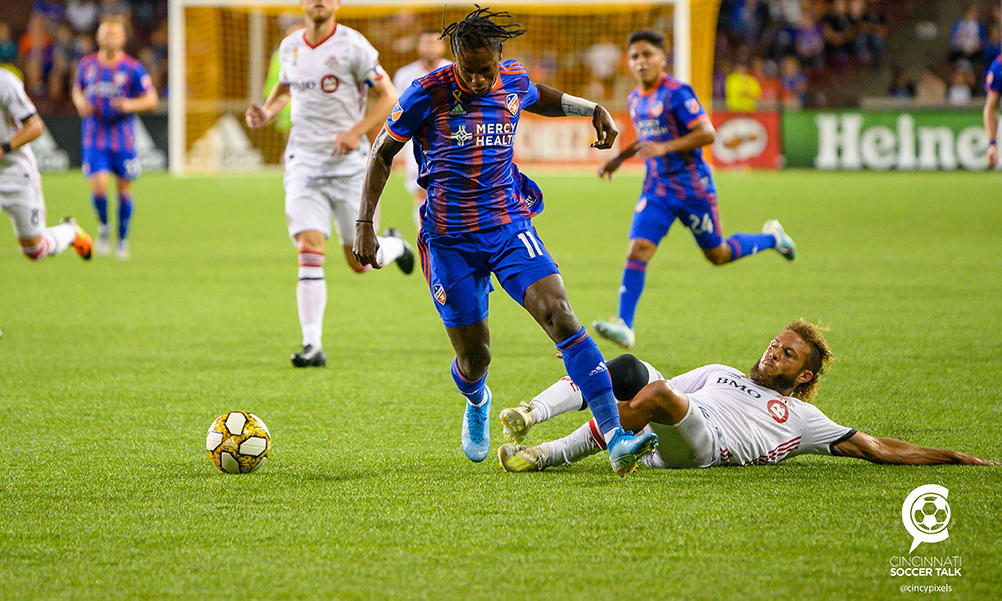 FC Cincinnati will be taking the pitch at 7:30 p.m. Wednesday against the 2018 MLS Cup Champion Atlanta United. This weekday match will take place only days after FCC snapped its nine-match losing streak.

FCC secured a 1-0 win over Montreal over the weekend. Allan Cruz scored the only goal of the match in less than 30 seconds, the fastest goal in FCC’s MLS history. Cruz’s goal led FCC to its first victory in two months. Goalkeeper Przemysław Tytoń helped the club get its first clean sheet since March 24 against New England.

The club’s performance against Montreal gave the supporters a renewed vigor. There’s no doubt this excitement will bubble over into Wednesday. FCC showed true grit in the match against Montreal. Channeling that grit will be crucial against Atlanta.

The last time these two clubs met, it was the second week of the season. Roland Lamah scored his first goal against the former MLS champs to earn a draw for FC Cincinnati.

However, since that match, a lot has changed.

FC Cincinnati has faced a tumultuous season since then. The downs have surpassed the ups, and the 2019 season has been a big struggle. But the club will go head-to-head against Atlanta with a newfound motivation and momentum.

Meanwhile, Atlanta has fought its way closer to the top of the table. Currently sitting in third place with 48 points, Atlanta will be coming into this match on a mission after a 3-1 loss to Columbus over the weekend.

A short turnaround time for both clubs will play into lineup decisions. While international call-ups won’t affect FC Cincinnati for this match, the injury curse that has plagued FCC all season has returned.

Allan Cruz will be potentially unavailable after a nasty hit near the end of the Montreal match. After a vicious head butt, Cruz was evaluated by an independent physician for a possible concussion. Cruz has been crucial to FCC’s moments of success, and his absence on the pitch will be noticeable.

Darren Mattocks will be questionable for Wednesday’s match. Mattocks went down hard after a tackle, clutching his right leg; he had an MRI on Monday.

Mathieu Deplagne also suffered an injury Saturday. After a tackle inside the box, he was down for an apparent ankle injury. After being evaluated on the pitch, he returned and finished the match. Jans might choose to rest Deplagne and give Andrew Gutman the start against Atlanta.

Kendall Waston will also be unavailable against Atlanta after being sent off on Saturday. Waston received a second yellow in the match in the 88th minute against Montreal. However, Waston will be available for the Saturday match against the Chicago Fire. Jans will have to get creative with the backline again with Waston’s absence.

Wednesday night will be a true test as to how far FC Cincinnati has come under Jans’ leadership. Tune in at 7:30 p.m. to watch the Orange and Blue take on the MLS champions at Nippert Stadium.