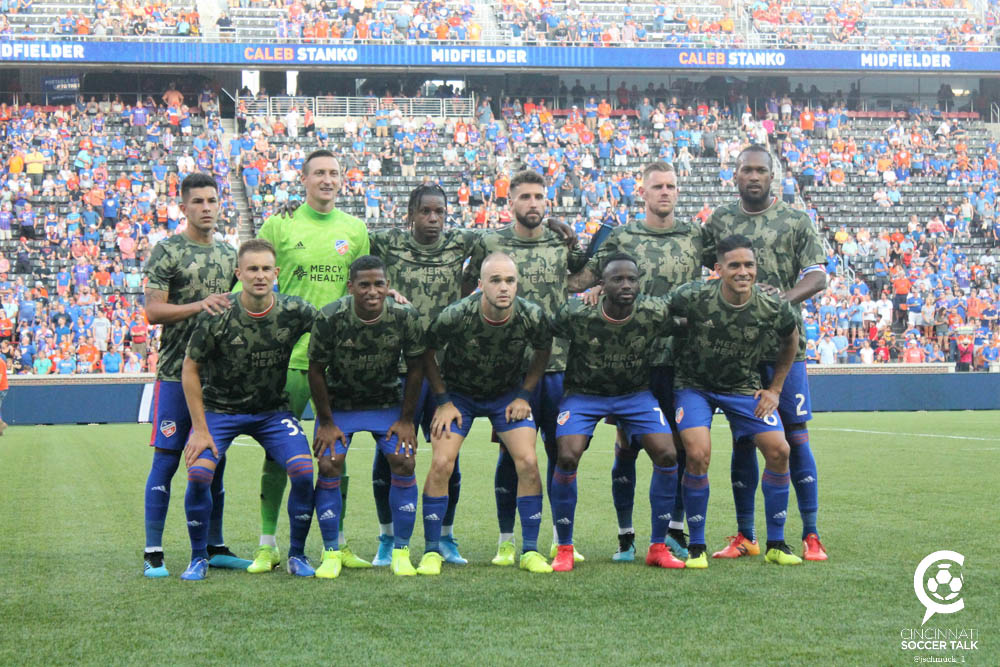 FC Cincinnati got its first win in two months Saturday over Montreal behind an opening-minute goal by midfielder Allan Cruz. Here are our player ratings for the match.

Hello Cincinnati Soccer Talkers! FC Cincinnati got its first win in two months behind an opening minute goal by Allan Cruz. This was also coach Ron Jans’ first win as the manager of the Orange & Blue. Unfortunately, Cruz had to exit due to a head injury and could be without him and Kendall Waston (red card) for Wednesday night’s match against Atlanta. Now on to the Player Ratings!

Montreal rattled off 17 shots, but one lone shot found the target for the home side. The lone save was an absolute beaut when he denied Maxi Urruti from point-blank range. You’ve seen several videos this year with Tyton and goalkeeping coach Jack Stern practicing these type of reaction saves. Credit to Tyton and Stern for keeping the clean sheet on the night.

I know the MVP this season will probably be Cruz or Ledesma, but look at the stats when Garza gets to play at his natural left-back position. Garza is solid and helps lock down his side of the field. When Montreal got up the left side, he turned the attackers and forced low percentage shots from outside the box. If FC Cincinnati can keep him healthy, that position that started as a glaring weakness becomes one of the strongest position groups heading into 2020 with Gutman.

Waston’s nice night will be overshadowed by the pickup of a second yellow card in the 87th minute. The central defender was judged to have brought down Urruti just outside the box. The referee didn’t have use of VAR when awarding the card. In real-time it looked like the two players might have gotten their feet tangled up, but upon review, there was very little to any contact that should have awarded a card. Tough call on Waston, and the card will see him miss Atlanta on Wednesday.

Little moments that don’t end up on the stat sheet can be huge in deciding who wins or loses. Van der Werff had one of those moments in the 27th minute. Urruti originally beat him to the ball and forced it out wide to an oncoming Orji Okwonkwo. For a moment it looked like Okwonkwo could have found Ignacio Piatti in the middle of the box, but van der Werff hustled back to cut off the passing lane. No doubt upon review Jans will circle this moment as one he can build off of on the defensive side of the ball.

Gutsy performance by Deplagne. The right-back took a pounding but made it 90 minutes for the Orange & Blue. You have to tip your cap to the Frenchman. This year he’s been asked to do so much, and it was nice to see him rewarded with the club’s third clean sheet.

Bertone had a solid match starting at the base of the midfield. He did a nice job clogging passing lanes in front of the back four. He had five defensive recoveries for Cincinnati and showed some nice hustle to keep up with the Montreal attack.

It was a bit of a quiet match for the first overall pick in the draft, but I love how he gets involved on all sides of the ball. The young midfielder had four defensive recoveries for the Orange & Blue. Things will get better going forward for Amaya, but if he wants to solidify himself as a starter in 2020, it’s dirty work like this that will earn him minutes.

One of the lone bright spots of the year, Cruz beat his previous record of 45 seconds with a goal 25 seconds into Saturday’s match. With scoring chances few and far between for FC Cincinnati, Cruz has taken advantage of his chances, scoring a team-high six goals. After his early goal, he did have some trouble staying on the ball. That had a lot to do with FC Cincinnati’s game plan and Montreal’s willingness to play with the ball. FC Cincinnati fans will need to monitor Cruz as he took a knock to the head in the middle of the second half that caused him to leave the match.

You can start to see why FC Cincinnati brought Gyau in after a strong performance Saturday night. The pacey winger is dangerous and not afraid to take on defenders. He had a chance to kill off the match in the 77th minute and forced a tough save from Montreal goalkeeper Evan Bush. You have to think when FC Cincinnati’s offense starts to develop a flow, he will be a big beneficiary.

Ledesma nearly got on the board again in the 35th minute. The Argentine winger isn’t afraid to take risks and almost snuck the ball near post of Bush. With FC Cincinnati preferring to sit back and bunker, creative combinations were tougher to come by, but I still liked his performance against a team fighting for a playoff spot.

In his post-game comments, Ron Jans highlights Mattocks saying that he put in a true team performance. While this hasn’t been the case for most of this year as Mattocks at times has tried to do his own thing, the forward put in a nice shift. His hold up play was greatly improved, and you could see a partnership forming with Gyau. I’m not sure Mattocks will be in Orange & Blue next season, but he’ll have four matches to impress Jans to earn a contract in 2020.

Fatai Alashe subbed in for Cruz. Alashe continues to show spurts that made him a coveted prospect in San Jose. He helped get into the attack and was part of the build-up that led to Gyau’s scoring chance.

The rookie forward was a late sub for Mattocks. Shortly after coming in, Waston received the red card which put the club down to 10 men.

Hagglund came in for Amaya after Waston’s red card.