Brad Gough breaks down Allan Cruz’s goal just 25 seconds in for FC Cincinnati as well as Montreal’s best look on Saturday in this week’s edition of How They Happened.

FC Cincinnati ensured that they will not outlast the 2005 Chivas USA team as the squad with the fewest points for an expansion team in its first year in “modern” MLS history with its 1-0 win against the Montreal Impact on Saturday. Here is a look at FCC’s game-winner as well as Montreal’s only shot on target.

FC Cincinnati found itself in the lead a mere 25 seconds into the match. This opening sequence made it evident that the Orange and Blue were not going to play the methodical, possession-based soccer that they have been known for under coach Ron Jans. As Maikel van der Werff took possession of the ball, the Impact front line backed off, daring the center back, as so many teams have over the past few matches, to play the ball sideways to Mathieu Deplagne or to attempt to squeeze the ball into Leonardo Bertone. Instead, van der Werff chose Route 1, hitting a long ball in toward forward Darren Mattocks, who showed some real fight challenging for the ball. Emmanuel Ledesma and Joseph-Claude Gyau both stayed alert waiting for the knockdown, which came off to Ledesma.

Ledesma carried the ball forward and made what could have proved to be the wrong decision in trying to float a ball behind the backline to Allan Cruz. However, Gyau didn’t quit on the play and continued to prowl around the outside of the box — a rare case in matches of late for most FCC players.

Impact center back Rudy Camacho easily won the floated ball but couldn’t clear it further than Gyau, who drove the ball forward looking for a shot. Cruz impressively moved to get himself back onside prior to Gyau’s strike, which deflected off an Impact defender toward the Costa Rican. As he has done so often this season, Cruz was alert to the opportunity and made no waste in scoring what proved to be the game-winner for the Orange and Blue. 1-0 to FC Cincinnati.

It has been an extremely rare case that there hasn’t been an opponent’s goal to break down in this column. So, I thought it may be useful to take a look at the chance that forced goalkeeper Przemyslaw Tyton into his only save of the match. Urruti’s point-blank shot came after a set-piece play that saw Ignacio Piatti check short, catching Cruz off guard. Bertone was matched up on Urruti (light blue circle). 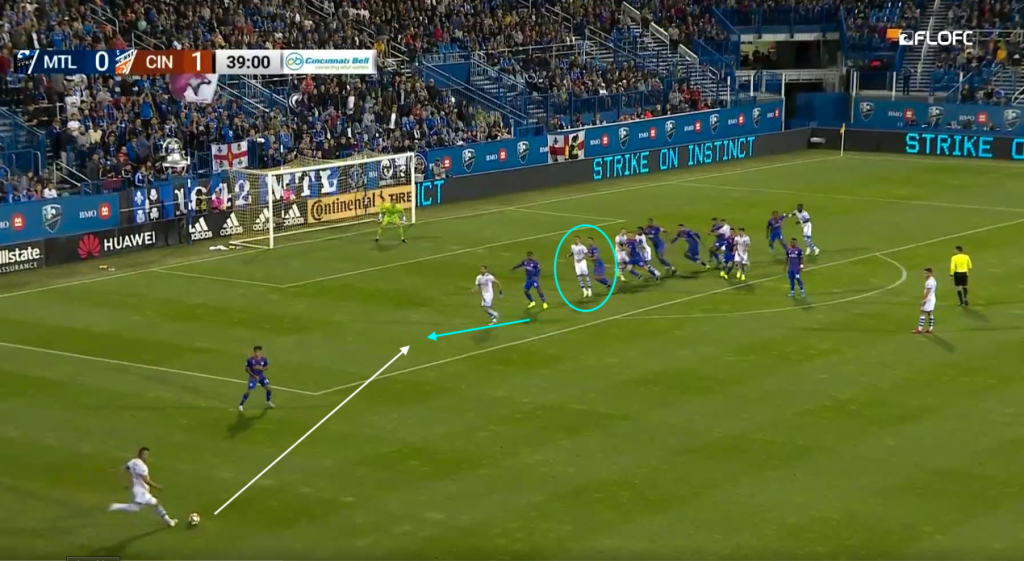 Cruz’s slow reaction allowed Piatti to take a touch toward the goal line looking to clip the ball in toward the back post. Bertone floated toward the action, losing Urruti. Mattocks and Deplagne both relaxed their defense as well, leaving their marks too much space. 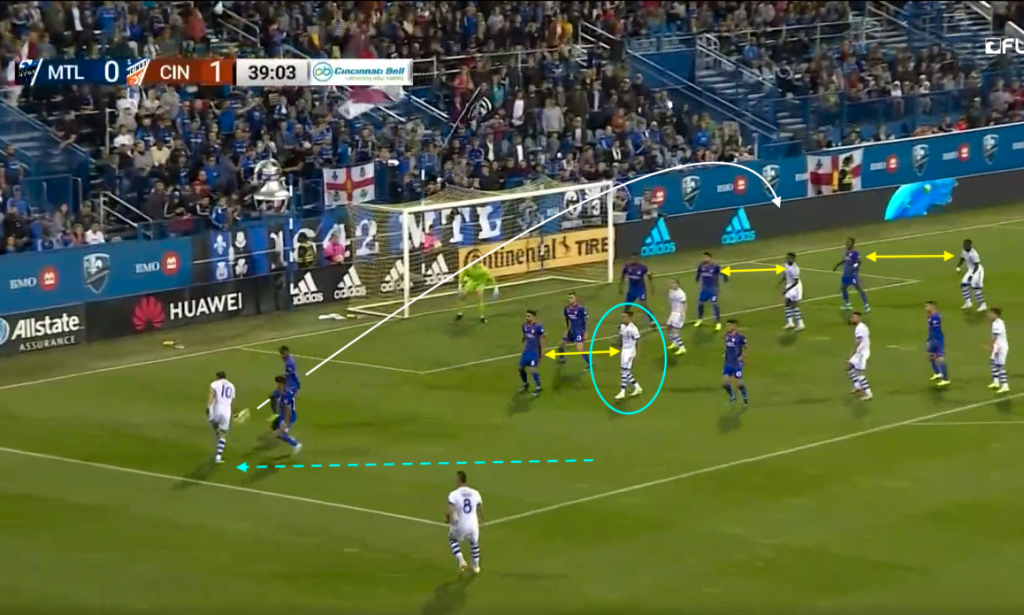 As the ball floated toward the back post, Mattocks’s relaxed posture allowed Bacary Sagna to have a free run at the ball. Urruti turned to track the ball as Bertone drifted even further from the forward. 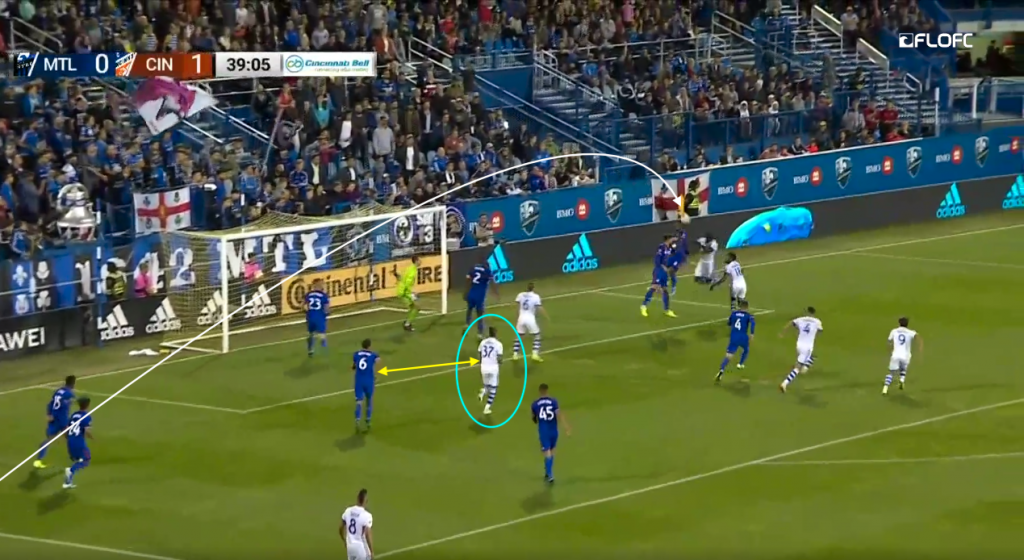 Sagna won the knockdown, and Urruti had acres of space to direct his shot at Tyton’s goal. Tyton was alert to the danger and made a fantastic reaction save to keep the clean sheet intact. However, had any of Cruz, Mattocks or Bertone been even slightly more alert, it is easy to think that Tyton may not have needed to bail the team out. 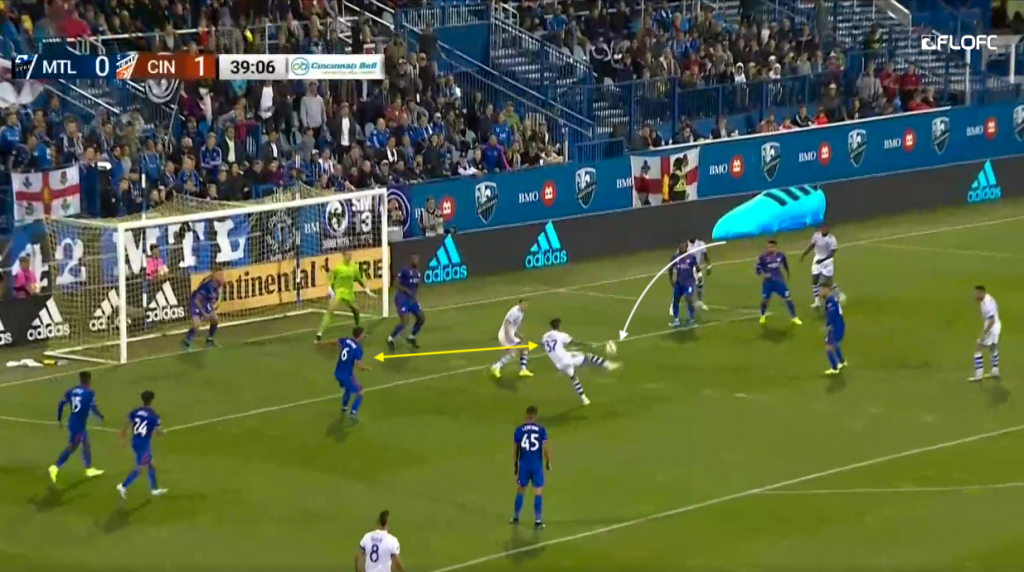 A rare win for the Orange and blue, and an even rarer clean sheet. It was obvious that FCC took a “bend, but don’t break” approach to defending, allowing Montreal to have a lot of shots, but not allowing many to make it through to goal.