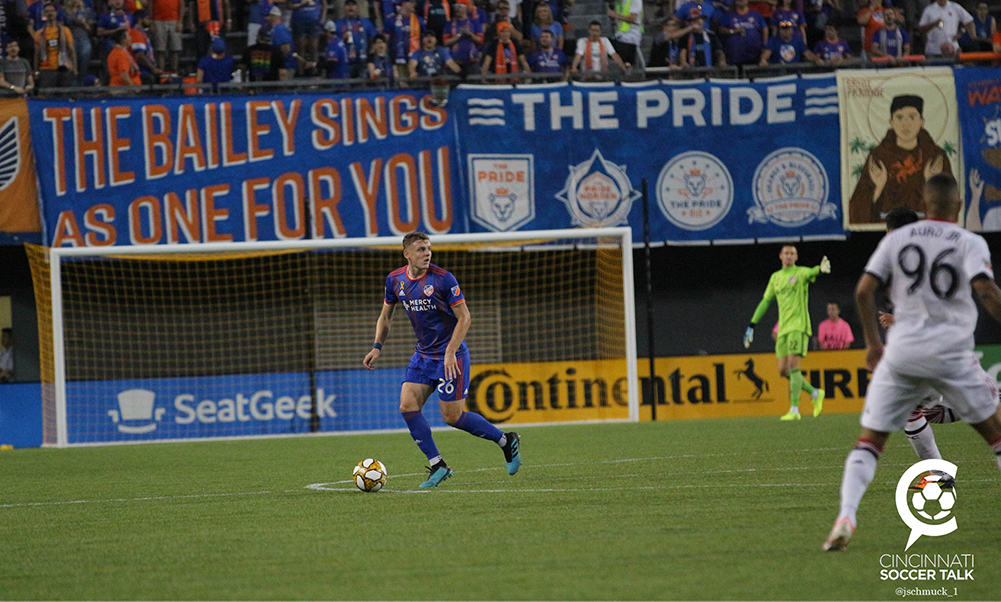 Rookie midfielder Tommy McCabe has seen minutes in some tough spots this season but says he’s learning from the coaching staff and his FC Cincinnati teammates.

MILFORD – The expression “Trial by fire” refers to the test of one’s ability to perform well under pressure or duress. This could apply to any player on FC Cincinnati’s roster at the present time, but let’s consider Tommy McCabe.

McCabe is 21 years old and talented enough to be the 29th overall pick in this year’s MLS SuperDraft. He is playing in MLS, something he dreamed of doing while growing up in an athletic family and playing soccer in South Orange, New Jersey.

On June 29 at steamy Allianz Field, McCabe was asked to play significant minutes in a match that most FCC fans would like to forget: The 7-1 mauling at Minnesota United.

With FCC’s roster depleted by Gold Cup call-ups, McCabe was recalled from his loan at North Carolina FC. He entered the match after halftime, with FCC already trailing 4-0.

His second appearance came in a 2-1 defeat at Toronto FC, and his first career start was Saturday at Nippert Stadium. He played 90 minutes in a 5-1 loss to Toronto.

“It’s tough,” McCabe said. “We came in to this season with expectations to do better than we have. It’s an open slate for everyone, an opportunity to prove themselves, not necessarily for the rest of the season but looking ahead to the future. As a player, you want those opportunities to play, but I have to make the most of it.”

McCabe registered a 92.3% pass accuracy in his debut at Allianz Field. That’s what he does best, he collects and distributes the ball quickly and accurately.

What he doesn’t want to do is step outside his skill set and feel the need to thread an unnecessary pass or lose possession with a difficult touch. That’s something easily done in FCC’s present situation, with the club desperately wanting to get results and finish a miserable expansion season on a positive note.

“It’s tough to just control what you can control and stay within your role on the team, but I think for the last month of the season, to be successful, we do have to do that,” McCabe said. “I want to stay present. There’s a challenge that we have as a team going on right now that we want to overcome in the next month.”

Perhaps it’s easier for a rookie like McCabe to not peer into the crystal ball and consider what the future holds for him in Cincinnati. He’s not far removed from a Jersey boy who dabbled in lacrosse before quickly discovering that soccer was not only his best sport but his only sport.

“Soccer has been my life,” said McCabe. “Sports has always been fundamental in our family. That’s something I can bond with my parents on, especially soccer.”

If you don’t think the baby-faced, soft-spoken McCabe has a competitive fire in his belly, consider that his mother, Susie, played field hockey and lacrosse at Princeton where his father, Tom, was a goalkeeper. Growing up with two accomplished athletes who went to an Ivy League school, the bar was raised just a little for the young McCabe. But the one lesson from his parents that he carries with him is “just to be a great person in everything you do, someone that people want to associate with and want to learn from and want to get to know,” he said.

At the moment, McCabe is doing the learning, and under difficult circumstances. FCC hasn’t won a match in two months. They have 18 points from 29 matches.

But with several veteran teammates who have played in MLS and abroad and a coach in Ron Jans who managed in the top tier in the Netherlands, FCC is a positive learning environment.

“It’s a great learning opportunity especially for a young player,” McCabe said. “We have a lot of guys who have played in the league or played in various leagues. For me, even though it’s a challenging season, there’s always an opportunity to learn each week and from each player in the locker room.”

With FCC out of the postseason picture and the club focused on the future, Jans can tinker with his roster to get a better idea of which players will or won’t be a part of next year’s roster. On Saturday, FCC became the first MLS club to start three players from this year’s SuperDraft, McCabe among them.

“I’ve gotten the opportunity to start and play in a couple games, and I want to continue to do that and grow in confidence on the field and try to make a push to be a bigger part of this squad,” he said.

As this season moves into its final month, McCabe, a Notre Dame graduate and member of the U-17 U.S. national team which participated in the 2015 U-17 World Cup in Chile, wants pretty much the same thing most FCC fans want from the final four weeks.

“We have five games left and we want to end the season on a positive note,” he said.