Brad Gough breaks down the goals scored in FC Cincinnati’s 5-1 loss to Toronto FC on Saturday.

FC Cincinnati found itself 3-0 down inside of 30 minutes en route to a 5-1 dismantling at the hands of Toronto FC on Saturday. Here’s a look at how all of the goals happened.

The opening tally for Toronto FC was the kind of fluky goal that a team never wants to give up, especially not early in the match. Caleb Stanko had a rush of blood to the head and tried to curl a ball in between Marco Delgado and Tommy McCabe, but the ball ricocheted off Delgado perfectly through for Patrick Mullins. It’s hard to fault anyone but Stanko here, though McCabe probably should have been backpedaling to offer a simpler option and to expand passing lanes. Also Greg Garza should have been positioned between Mullins and the goal, which would have allowed for an easier recovery. However, neither McCabe nor Garza expected Stanko to be so careless with the ball. 1-0 to Toronto. 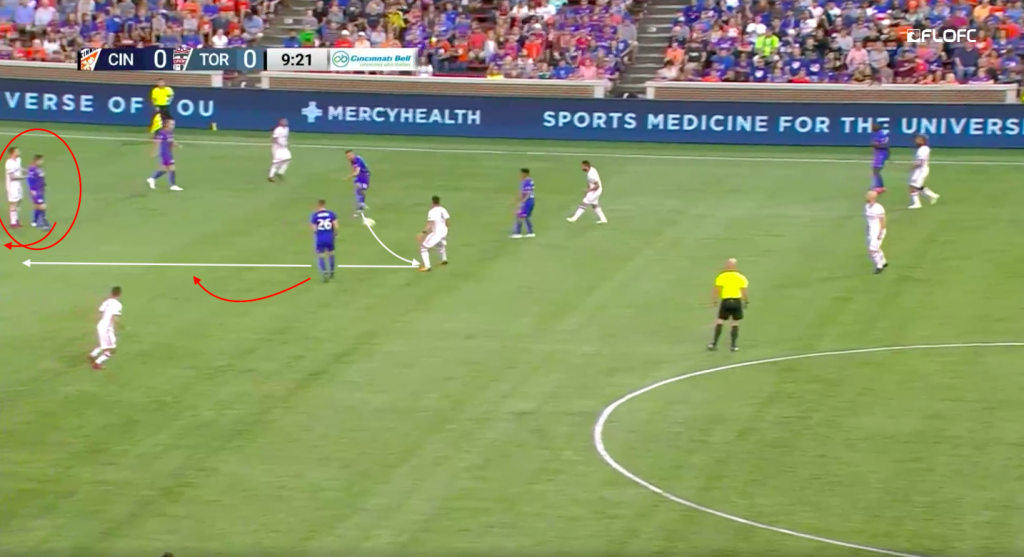 Nick DeLeon’s full volley was the kind of well-struck goal that teams are going to score from time to time regardless of the defense. However, there were two key things that could’ve prevented him from getting off the strike to begin with. First, Roland Lamah was responsible for the part of the box where DeLeon was stationed. Lamah incorrectly positioned himself with his back to DeLeon instead of at an angle, with the ability to see both the ball and the attacker. 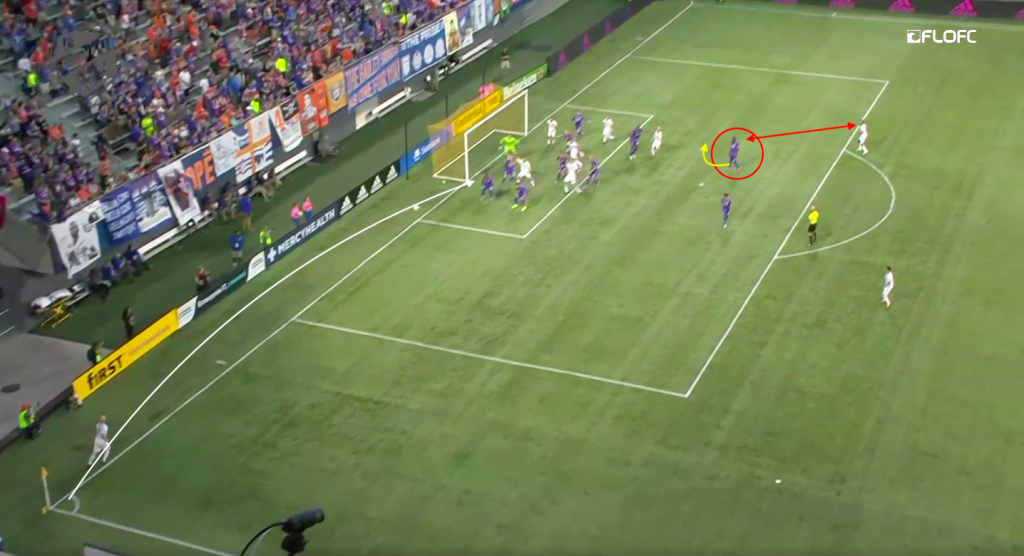 Michael Bradley’s inswinger was not well hit and found its way directly to Joseph-Claude Gyau at the near post. When clearing a set piece, defenders are taught to clear the ball high and wide, back in the direction from which the ball is traveling (yellow arrow). This keeps the ball in front of the defense to allow teammates to react and provides maximum force for the clearance. The play before this saw Mathieu Deplagne smartly clear a ball directly out of bounds when he was unable to direct it appropriately.

Instead, Gyau cleared the ball to the back part of the box. Lamah, due to his poor positioning, had to track the ball over his shoulder and try to turn and find his man. DeLeon had free run to size up his volley. 2-0 to Toronto. 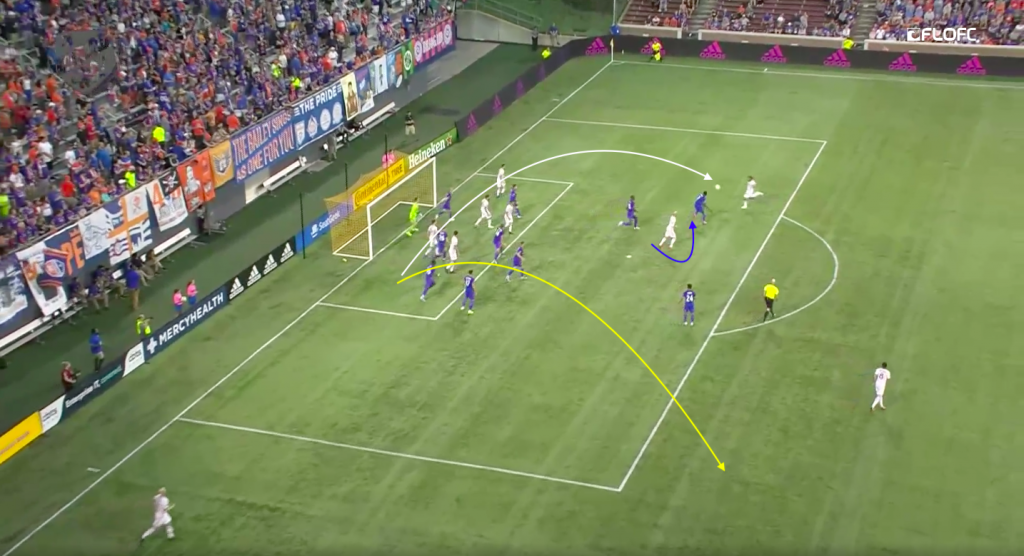 TFC’s third goal was the first of the match that can really be attributed to poor tactics. The move began with TFC’s Laurent Ciman being allowed to step forward and find a long, field-switching ball to Erickson Gallardo due to the improper pressure from Rashawn Dally. As he stepped into the midfield, FCC’s midfield triangle was badly out of shape with Frankie Amaya at the point in position to pressure, McCabe behind him screening the center forward. But Stanko uselessly positioned even with McCabe and in the same space as Gyau. Stanko should have been the deepest lying midfielder (yellow). 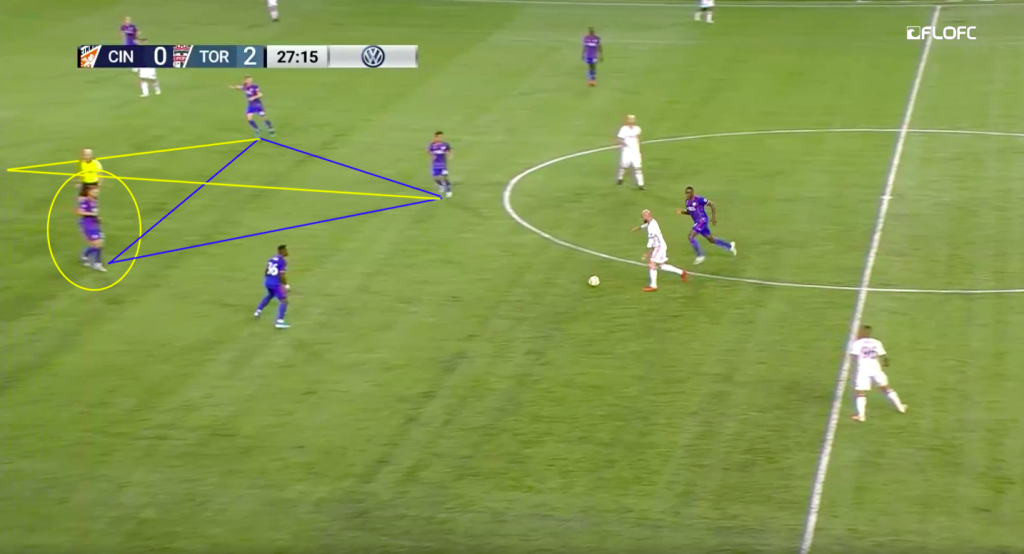 Had Stanko been correctly positioned he would have been available to track the run of Delgado into the box. As the defensive midfielder in the 4-3-3 system (a.k.a. the No. 6), Stanko’s job as the ball goes wide is to position himself between the center backs to allow the back line to stretch fully to a pressure/cover position without exposing too many gaps. Stanko should have either recovered in behind Garza, picking up Mullins and allowing Nick Hagglund to track Delgado, or more likely he should have dropped in behind Hagglund, picking up Delgado himself.

Deplagne had stretched wide here to marshal Nicolas Benezet, so Delgado was not his responsibility. However, this does not excuse him from not recovering once he saw Delgado waltzing into the box unmarked. 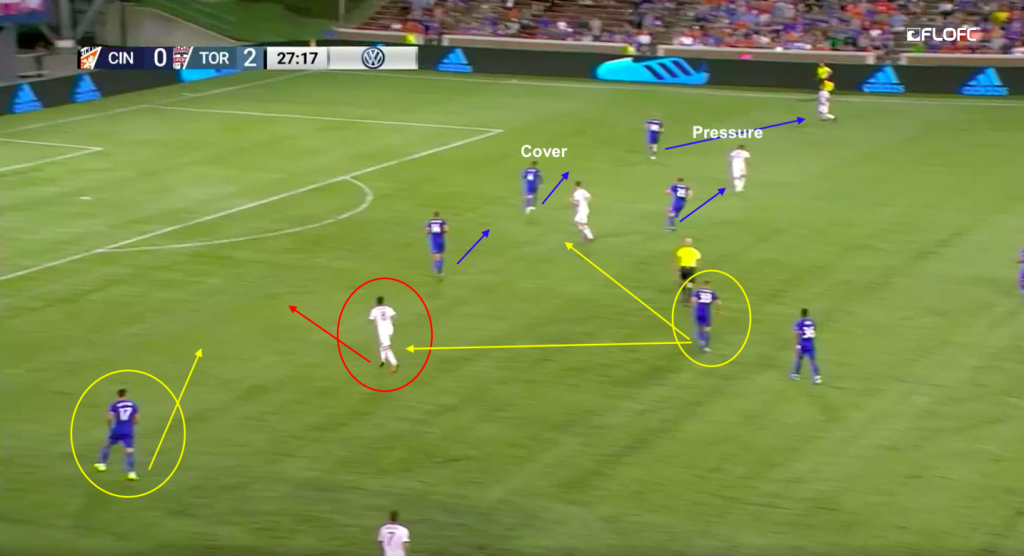 Without Stanko recovering into a useful position, Hagglund pinched to the center to mark Mullins, leaving Delgado free at the back post. Deplagne’s slow jog toward Delgado, with no lack of urgency, is the marker of a player who had already given up on the day. Gallardo found Pozuelo, who swung the ball in to the unmarked Delgado… 3-0 to Toronto. 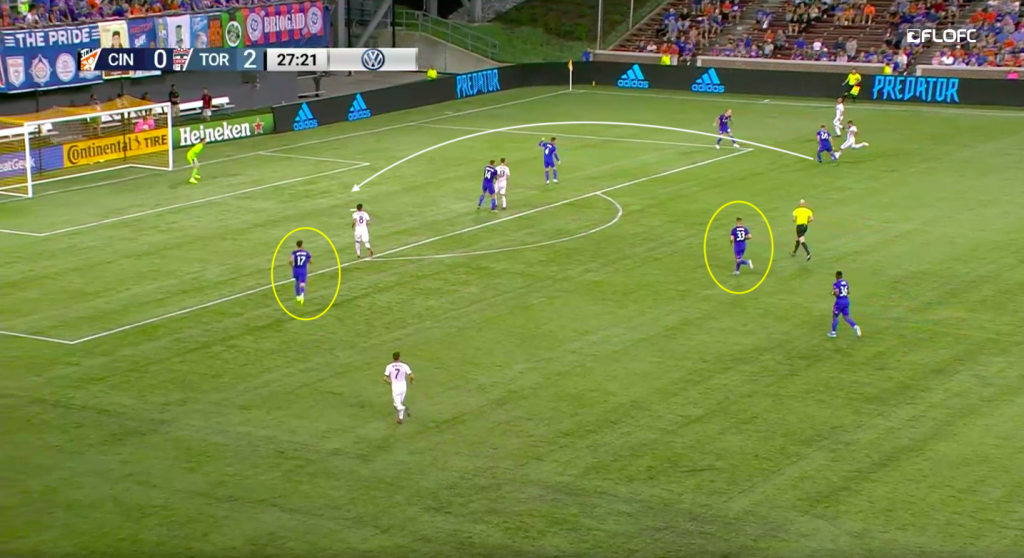 In the 63rd minute the midfield triangle was once again pulled out of position, with Stanko getting caught higher up the field than McCabe, allowing an easy penetrating pass into the feet of Mullins. 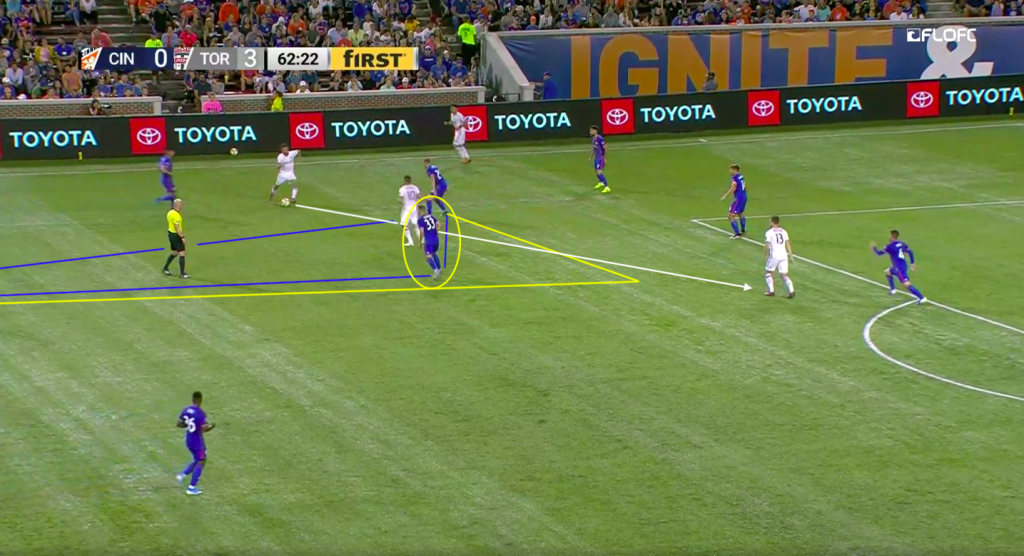 As the ball went between the pair, McCabe and Stanko turned to watch, allowing Michael Bradley and Alejandro Pozuelo to move into dangerous positions. Greg Garza tackled the ball away from Mullins straight to the feet of Pozuelo. 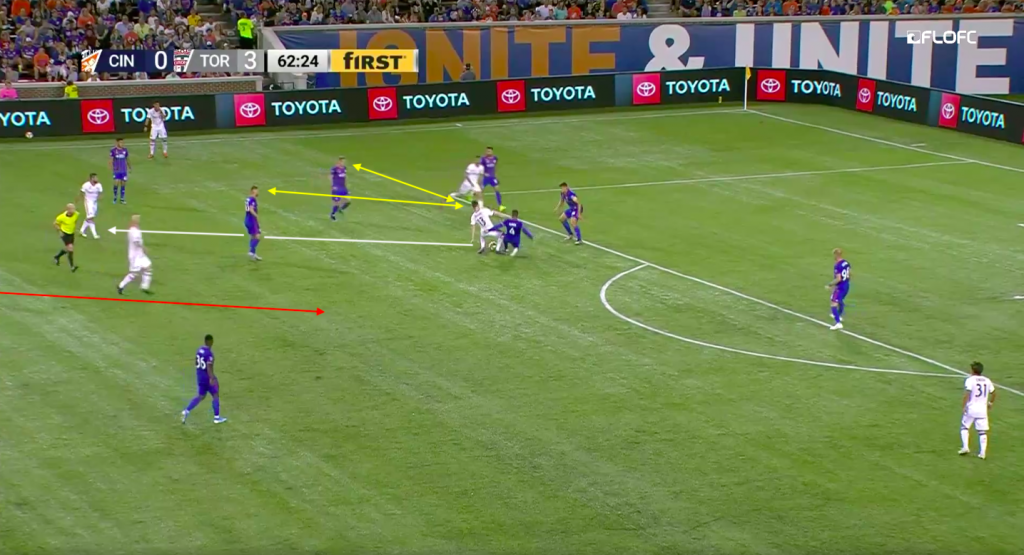 As Pozuelo received the errant tackle, McCabe and Stanko both turned to watch the ball. With Stanko caught out of position, Gyau was the closest FCC player but elected not to react to the run. 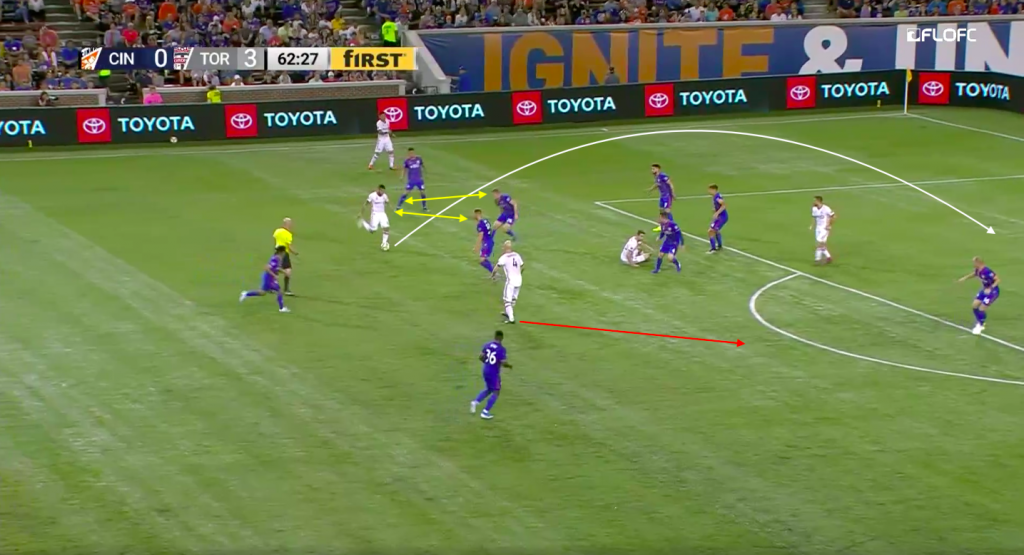 As Pozuelo swung the ball to the back post, both Hagglund and Garza collapsed in toward goal. This was a natural reaction from the center backs, as they would have expected the late-running midfielders to be picked up by Stanko and company. However, a bit more awareness would have allowed Garza to spot Bradley and adjust his recovery. Endoh cooly cushioned Pozuelo’s cross into the path of Bradley who wasted no time in powering the ball into the back of the net. 4-0 to Toronto. 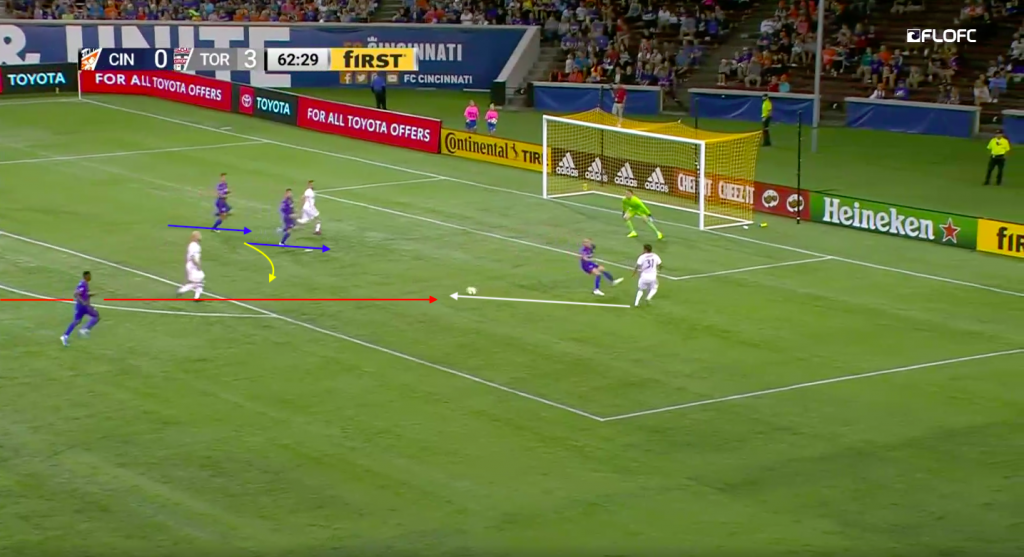 Another TFC goal, another case of poor midfield play from FCC. This time it was McCabe (now the defensive midfielder with the substitution of Fatai Alashe) caught up field when he should have been the deepest of the three midfielders. Alashe maddeningly reacted to a head fake by Nicolas Benezet, jumping up field and allowing him to penetrate with the dribble. McCabe’s poor positioning made it impossible for him to stop the dribble. 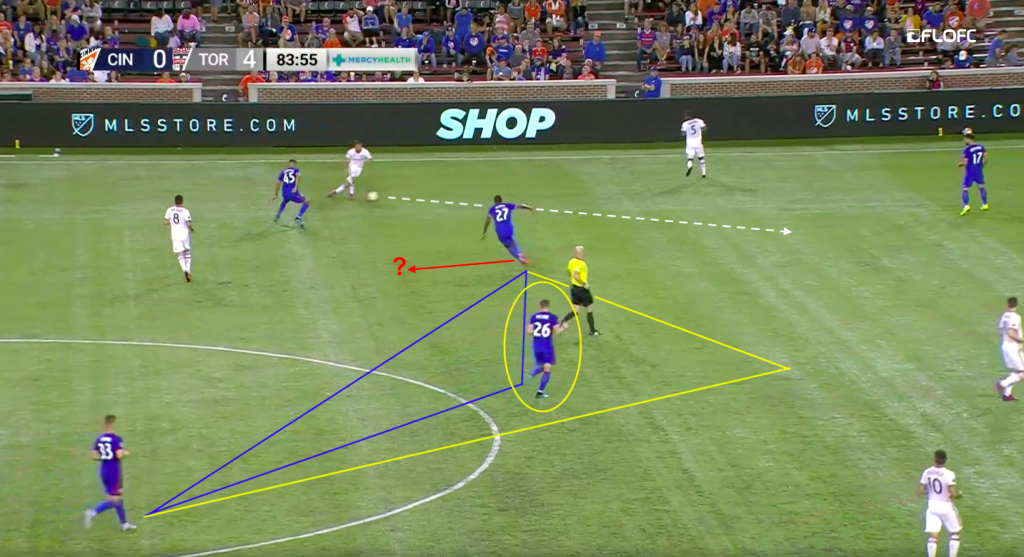 To his credit, McCabe (red circle) reacted well to try to close down Benezet, who was forced to try to squeeze the ball into Mullins. Garza, as the week side center back, should have been the deepest player on the field, but was inexplicably a few yards ahead of Hagglund. 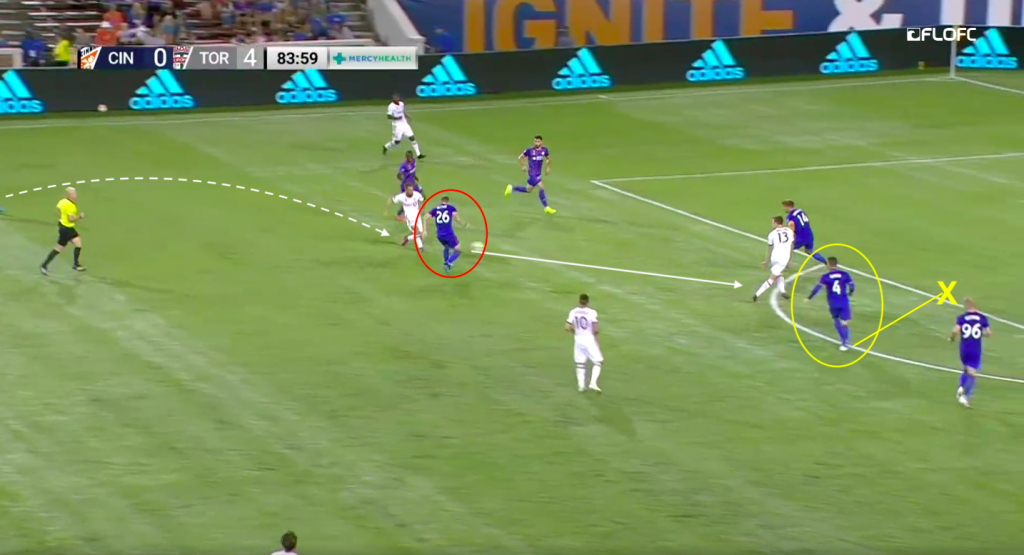 As Benezet played the ball toward Mullins, McCabe stopped tracking the winger. Out of position, Garza was forced into a last ditch lunge to poke the ball away from Mullins. With McCabe now as a spectator, Benezet was free to run straight onto Garza’s desperate poke and finish expertly to the far post. 5-0 to Toronto. 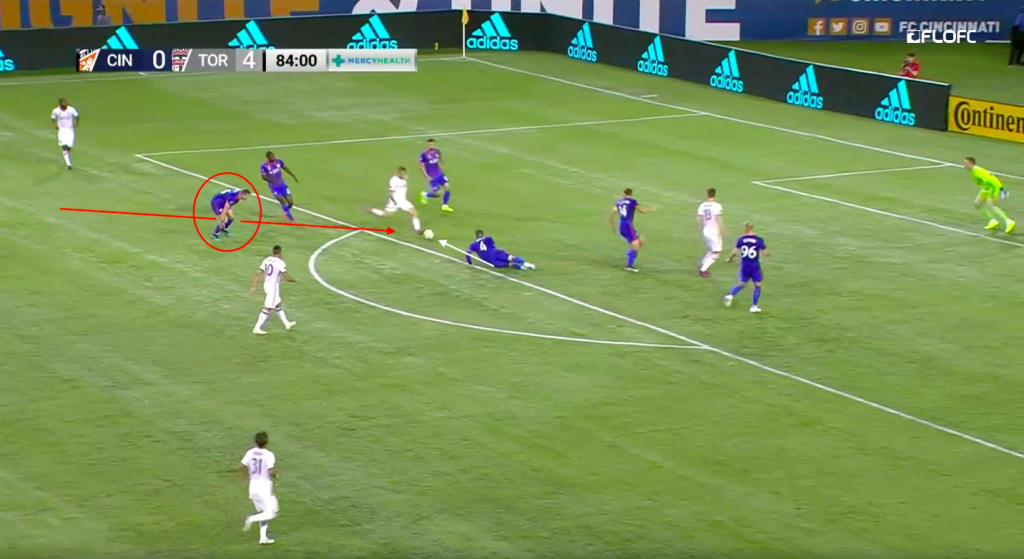 Emmanuel Ledesma’s emotional consolation goal was a penalty kick resulting from a handball off a set piece. The set piece was earned by a good piece of play by the Orange and Blue that began with Darren Mattocks dropping in between the lines to pick up a pass from Stanko. This drew the TFC defenders, specifically Omar Gonzalez, in toward the center. 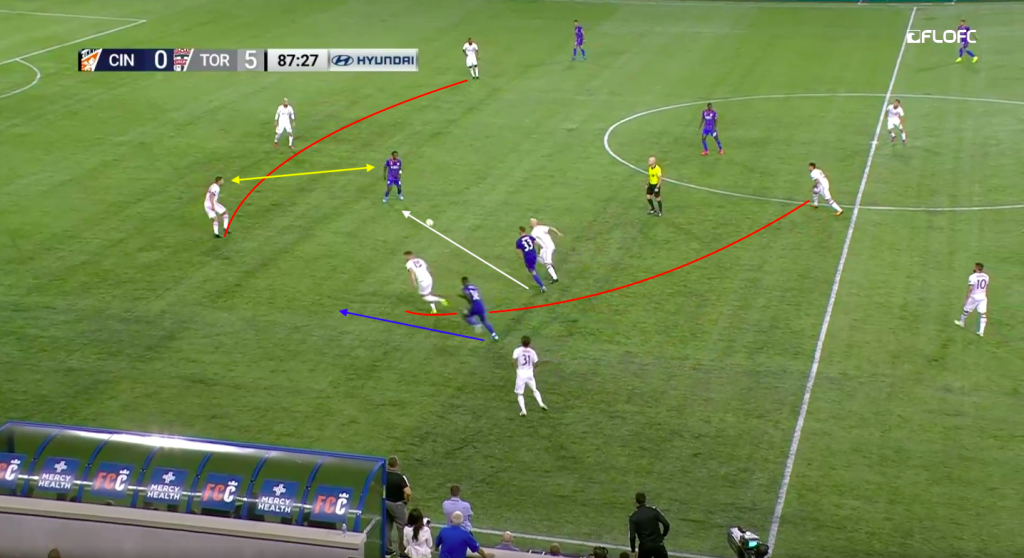 Gyau displayed the pace and cunning that FCC fans expected of the new signing when he burst inside of recent substitute Eriq Zavaleta. With Gonzalez pinched slightly in, Mattocks had a clear window through which to play the speedy winger with an excellently weighted pass. 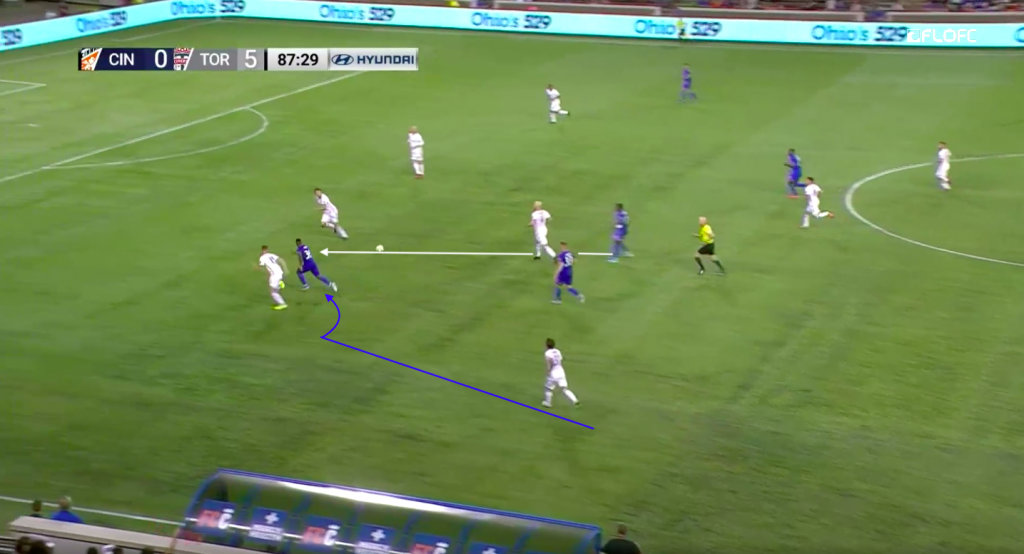 Gyau’s first touch was excellent, taking him in front of Zavaleta and not allowing the full back any chance to make a play on the ball. Zavaleta pulled Gyau down, earning himself a second yellow card and Ledesma a dangerous free kick. Ledesma’s free kick was blocked by the raised arm of Endoh, earning him a penalty, which he finished with authority. 5-1 to Toronto. 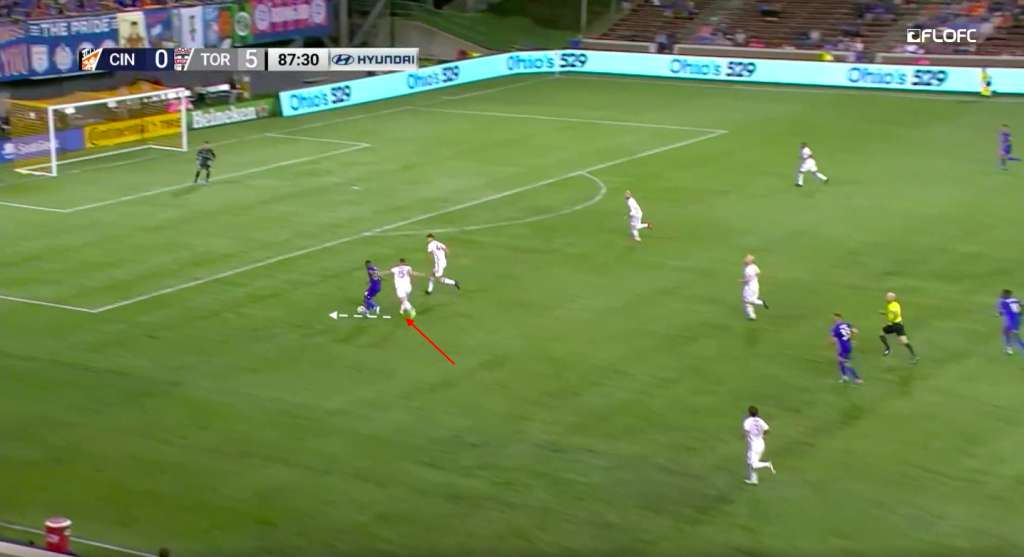 The kinds of positional mistakes and ball-watching errors that undid FC Cincinnati against Toronto FC are common in soccer at all levels. It is nearly impossible to eliminate them completely, so teams must strive to decrease the frequency of their occurrences and increase their ability to recover from the mistakes. Right now, these mistakes are not only happening too often to the Orange and Blue, but the players on the field lack the skill or desire to recover from them.

With most teams, a small mistake often leads to a recovery tackle, a professional foul, or a last ditch clearance into the stands. With FCC it seems that most small mistakes lead to other small mistakes and end in goals.