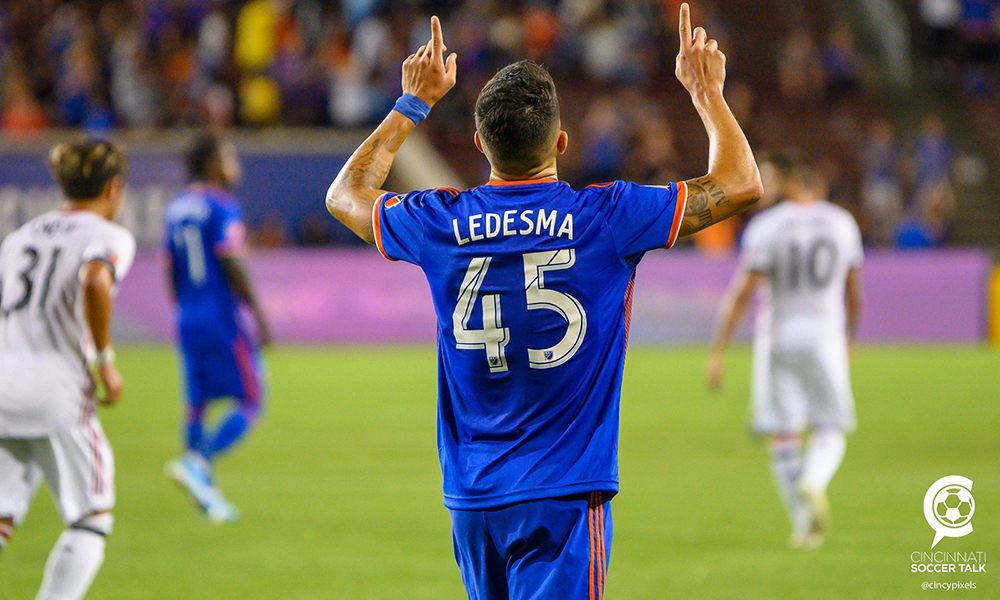 Emmanuel Ledesma notched the only goal in FC Cincinnati’s 5-1 loss Saturday to Toronto FC with a second-half stoppage-time penalty kick.

FC Cincinnati coach Ron Jans compared the team to the Pirates of the Caribbean last week. Knowing it was out of the playoffs, the team now played to plunder treasure in the form of points from the opposing teams and to be spoilers. There wasn’t any treasure to be had, though, as the Orange and Blue suffered a 5-1 defeat Saturday at Nippert Stadium at the hands of Toronto.

Jans made eight changes to the lineup. Four players, Allan Cruz, Derrick Etienne Jr., Alvas Powell and Kendall Waston were all unavailable having been called up to their respective national teams. Fanendo Adi, Victor Ulloa, Maikel van der Werff and Spencer Richey were unavailable because of injury, and Kekuta Manneh was absent because of a red card suspension. Frankie Amaya and Mathieu Deplagne both returned from injury to help fill up the 18. Tommy McCabe and Joseph-Claude Gyau both got their first MLS starts.

Whatever the lineup, though, one thing is consistent. FC Cincinnati is not doing well on the pitch. In the first 30 minutes of the game, the Orange and Blue struggled to effectively clear the ball at critical moments, and unmarked Toronto players capitalized quickly. By the 28th minute, the score was 3-0 and the game was effectively over. Toronto managed to net two more in the second half, again when FCC struggled to get the ball out of its box. In the final minutes of the game, VAR helped with a call missed by the referee, and FC Cincinnati was awarded a penalty kick that kept it from being shut out at home.

It was an emotional night for Emmanuel Ledesma. After scoring his stoppage-time penalty kick, he displayed his undershirt with “I’m going to miss you dad” written on it.

Next up:
at Montreal Impact, 7:30 p.m. Sunday, Stade Saputo, Montreal