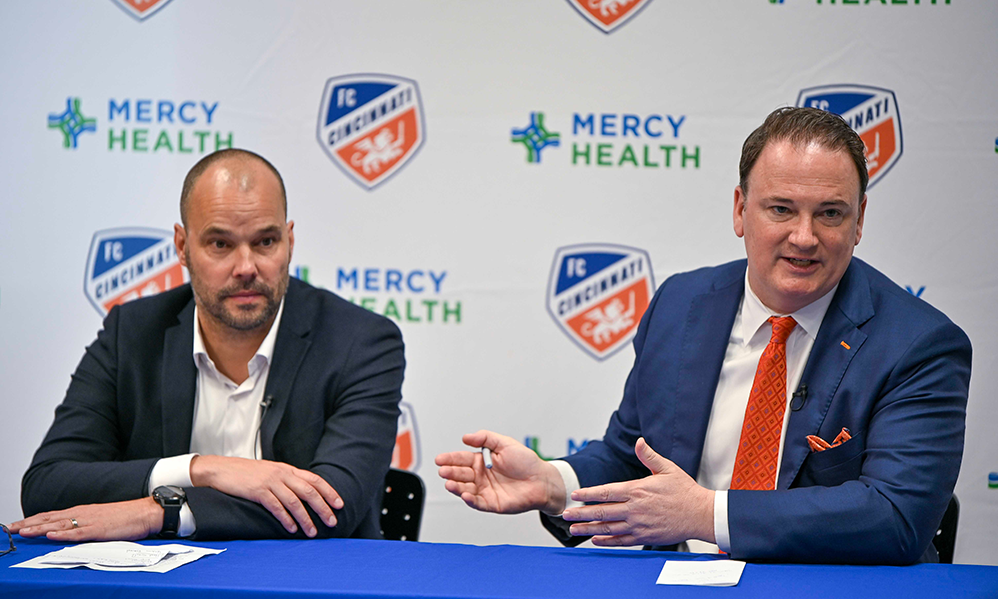 FC Cincinnati club president Jeff Berding said to the fans what fans have been saying for weeks now about the club’s inaugural season: “It’s awful. It stinks.”

Berding, general manager Gerard Nijkamp and coach Ron Jans had a town hall meeting with its fans Thursday about the club’s future direction on and off the pitch. FC Cincinnati has been mired in last place in the Eastern Conference in its inaugural season since Week 12.

The club’s brass were insightful as they fielded questions submitted on social media and from fans in attendance. Berding offered a blunt assessment of the season in his opening remarks.

“I’m committed we’ll never have a season like this again,” he said. “It’s awful. It stinks.”

FC Cincinnati currently sits at 18 points. Lose out, and it would match the MLS record for fewest points by an expansion team in its first year. Chivas USA recorded 18 points in its inaugural 2005 season.

The season began promisingly, with FC Cincinnati earning seven points in its first four matches and reaching second place. But 10 losses out of the next 12 sent the Orange and Blue spiraling into the basement, where they’ve remained ever since.

In the middle of that descent, Berding relieved coach Alan Koch of his duties. And later he stepped back from his role as general manager, hiring Nijkamp to take over in his place.

The people who got FC Cincinnati into MLS earned the right to remain with the club for the transition, Berding said. He credited interim coach Yoann Damet and goalkeeper coach Jack Stern for keeping the club treading water as it sought a replacement for Koch, even if their efforts didn’t show with results.

“Good people we have to keep,” Nijkamp said of extending the contracts of Damet and Stern until the end of 2022.

Berding said in hindsight, he wishes he would have hired Nijkamp as general manager this time last year, “but I didn’t know what I didn’t know.”

Other items of note from the town hall:

■ In terms of roster building, Nijkamp said the most important thing is to build blocks, “to create an FCC DNA.”

Nijkamp was asked about targeting specific positions during the next transfer window.

“We can say we need a right-winger or a left fullback (as an example),” he said. “But we have to see what the market is doing.”

■ Nijkamp and Berding addressed a question about waiting until the new stadium opens in 2021 to spend significant money on players.

“No that’s not the goal,” Nijkamp said. “We have to focus on today.”

Berding acknowledged the club’s coffers have been lean this year but said “We’re not shy about spending money. … Last year we figured it out pretty well.”

■ Progress of the new West End stadium is on course. Berding said it will come out of the ground in the fall and is on target to open at the start of the 2021 season.

Berding said he has received interest from supporters group leaders and the fan advisory council about Washington Park being used as a common gathering place for the different groups during the march, which would end by climbing the stairs to the stadium.

Every season ticket holder will have an appointment, based on priority, to select their seats at the new stadium, Berding said. He said he envisions different spaces in the stadium being used “hundreds of days per year” for weddings and different events.

■ Berding also said the club adding a USL affiliate for next season is to be determined.