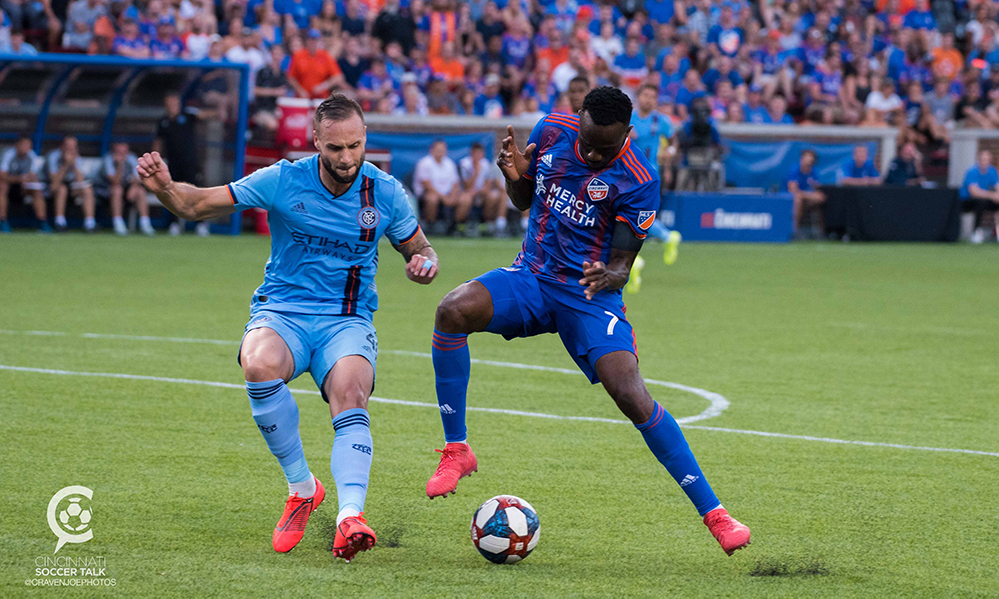 FC Cincinnati returns to Nippert Stadium on Saturday to face Toronto FC with four players out on international duty.

FC Cincinnati returns to Nippert Stadium to face Toronto FC at 7:30 p.m. Saturday for the second time this season. The two clubs last met on July 27, when the Orange and Blue fell 2-1 in Toronto. Since that match, FCC has lost four of its last five matches.

This will be the first time coach Ron Jans has faced Toronto. Four members of FCC have received international call-ups in the last week, including captain Kendall Waston. Allan Cruz, Alvas Powell and Derrick Etienne Jr. are among the others. How this will impact Jans’ starting vision is yet to be seen.

However, it will be a good opportunity for some of the younger players to get some minutes. Tommy McCabe, Rashawn Dally and Joseph-Claude Gyau might get the chance to clock some more minutes and gain more experience. Saturday could also be the night that Corben Bone, one of the original FCC members from the USL days, makes his return to the pitch.

With Waston out, Jans will have to decide whether to start FCC veteran Justin Hoyte at center back or Nick Hagglund. Waston has proven himself to be a great leader on the pitch, and those are big shoes to full. Hoyte and Hagglund have struggled at center back this season, but Jans’ options are limited.

Greg Garza might start at left back for the second match in a row, or Jans might give Andrew Gutman additional minutes and let Garza rest. Mathieu Deplagne was out the last match with a calf injury; if he returns this week, he’ll return to his natural right back position.

The midfield and FCC’s attacking front are more shaky, and Jans will have to get creative with filling these spots. Kekuta Manneh is not an option this weekend after he received a red card against Dallas last weekend. That still leaves Roland Lamah, Darren Mattocks and Dally up top. Fanendo Adi is out with a calf injury. The elimination of Cruz at the midfield is going to be a struggle; Jans will have his work cut out for him. But Jans will use this time as a trial period for who has the potential to make the squad next season.

Toronto FC has drawn three and lost three of its last six matches. Coach Greg Vanney has a positive outlook going into the match against FCC, and there’s no reason why he shouldn’t. Vanney and his club are hoping to carry on their unbeaten streak into Cincinnati. Every point on the line for Toronto is vital, and they will be coming in on the attack.

FCC has officially been eliminated from the playoffs, with a total of 18 points. FCC has only won five matches and drawn three, and there isn’t much hope for the rest of the season.

Toronto FC is currently in seventh place in the Eastern conference, bordering on securing a playoff spot. Every point is crucial, and it will be looking to score early and often. Throughout the season, Toronto has been fighting for a clean sheet and it will be looking for another one on Saturday. Vanney wants his back line to limit the scoring opportunities for FCC.

After Toronto, FCC will face Montreal, Atlanta, Chicago, Orlando City and D.C. United to end the season. All clubs except for Atlanta United and DC United are below the playoff line. These clubs are all fighting for wins in an attempt to clinch a playoff spot.