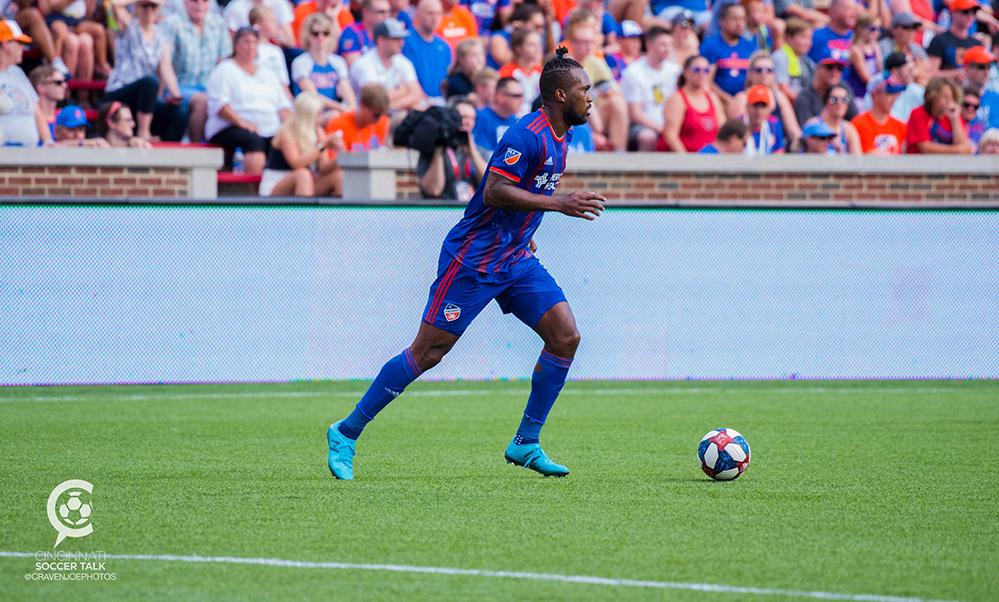 FC Cincinnati will try to shake off two home losses with a road match Saturday at Toronto FC, another Eastern Conference team in the playoff hunt.

For two weeks, FC Cincinnati gave the fans some hope with its victories over the Houston Dynamo and Chicago Fire. Those hopes were quickly destroyed after two rough losses at home against D.C. United and the New England Revolution. The transfer window is open, and relief appears to be coming to the defense in the name of Maikel van der Werff. The Dutch defender is expected to make is FCC debut this weekend when the Orange and Blue face Toronto FC at 8 p.m. on Saturday at BMO Field.

In a year of firsts, you can add this matchup to that list. This will be the first time Toronto FC and FC Cincinnati have faced off. FCC fans are familiar with the Toronto FC organization, as the Orange and Blue faced off against their Canadian counterparts Toronto FC II in USL play. However the talent FCC will face on Saturday is much different than the Toronto FC II clubs form years past.

Just when things were starting to look up for the Orange and Blue, two playoff-contending teams came into Nippert. This week, FC Cincinnati must shake off those losses and regroup against another team competing for a playoff spot. FC Cincinnati has been outscored 6-1 in their last two matches and is facing a Toronto FC club that, on paper, has the advantage in every major statistical category. Since we know the games are not played on paper, FCC has a chance to rise up and snag a valuable three points from the Reds.

After winning two straight matches, FCC has dropped two straight, even after getting more players back from injury and international duty. With van der Werff expected to make his FCC debut, the addition of more depth and familiarity could be crucial for the club moving forward. In its two wins, FC Cincinnati looked to have started to figure things out, but in their last two losses, reverted back to the misery and disarray of weeks past. At 5-15-2, this season is much worse than imagined, but with a win over Toronto FC, could that help to begin to turn the tide?

Toronto FC (8-9-5) is a team that has had a mixed bag of results. It has dropped games in which it should have won with little trouble. On the flip side, it has won matches where it had no business winning. With the talent on the Toronto roster, it has not been as dominant at BMO Field as you would expect. An average 5-4-3 record is something that can puzzle you, even for a club that dominated the league for a couple of years.

Toronto boasts a roster with a few guys with solid international experience. Michael Bradley and Jozy Altidore are two of the names that come to find for American soccer fans. Those two have a bevy of help in the form of Jonathan Osorio, Justin Morrow, Omar Gonzalez, Drew Moor, Chris Mavinga, Nick DeLeon, Terrence Boyd, Laurent Ciman, Marky Delgado and of course Alejandro Pozuelo. Since his arrival, Pozuelo has demonstrated the ability to take over a match. The 27-year-old Spaniard leads the Reds in both goals (nine) and assists (eight). As Pozuelo goes, so does Toronto FC.

Toronto FC comes into this matchup sitting just outside the playoff line. With only 29 points and sitting in eighth place, a win would do wonders for the Reds, who are making a push this summer. With a victory over FC Cincinnati and depending on the other results around the league, Toronto could be fifth in the East when this weekend is done and dusted.

Toronto is averaging 1.6 goals per match and is conceding an average of 1.7 goals per match. In this matchup, a lot of pressure will be expected to be placed on the FC Cincinnati defense. Toronto has scored 36 goals on this season, while FC Cincinnati has conceded a catastrophic 51 goals. Defense has not been their strong suit this season, and with Altidore, Bradley and Pozuelo going after the defense, it could be a long night for the Orange and Blue.

Sitting in the basement of the league, FC Cincinnati is looking ahead to 2020 because it doesn’t look to have any realistic chance at making a playoff run. With a new player in the fold and possibly one or more on the way, now is the time to build chemistry and familiarity with each other. Playing for pride is what these guys can do — and put a dent in the playoff hopes for a couple of these teams.

Three Keys to the Match