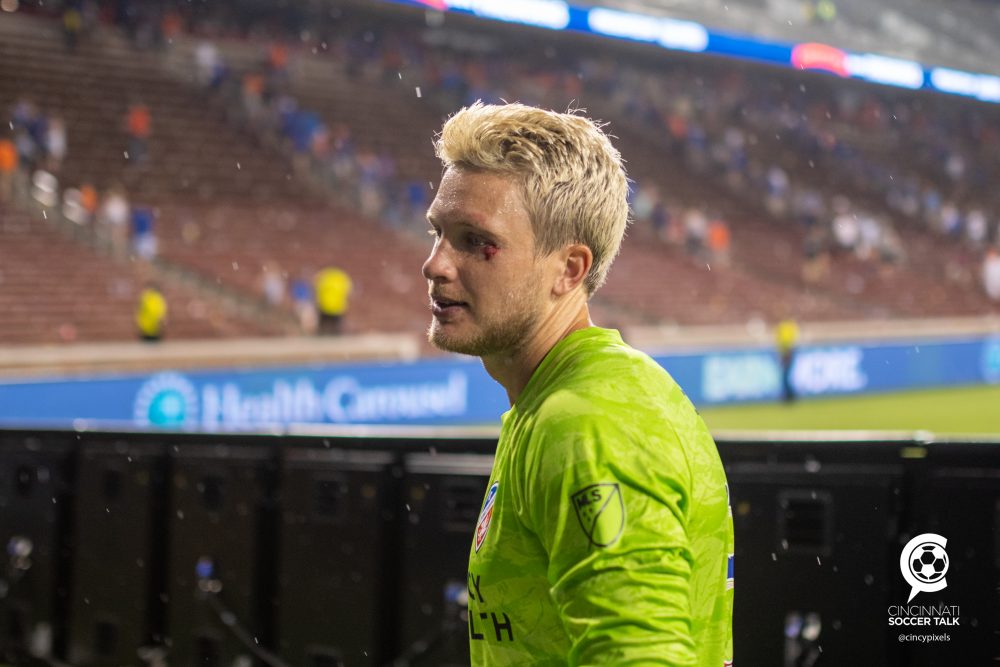 Certainly, this is a much different FCC roster than the one that took a 7-1 defeat at Allianz Field on June 29. But since then, the mentality seems to have changed as well.

CINCINNATI – It is a soccer dichotomy.

Spencer Richey had such an evening on Saturday in Bridgeview, Ill, when he had a career-high six saves including one on a penalty and somehow withstood a 20-shot barrage from the Chicago Fire in a 2-1 win.

Seven of those Chicago shots were on target, but the only goal they scored came on a fortuitous deflection after Richey saved a pen.

So, with Wayne Rooney and DC United coming to Nippert Stadium on Thursday night, how does FC Cincinnati shore up their defense in order to ensure Richey doesn’t have to have another career night, thus increasing FCC’s odds of winning a third straight match?

“I think we need to be even tighter in the middle,” said defensive midfielder Caleb Stanko. “not giving them that space so they have to go wide.”

Along those same lines, an adjustment by Yoann Damet at halftime on Saturday night seemed to pay dividends when he swapped Kekuta Manneh and Allan Cruz. Staying compact in the middle forced the Fire to go wide with their passes and slowed down their attack.

“That was huge,” Stanko said. “Kekuta was struggling on the outside picking up his man. But he did really well defensively for us in the middle. Allan did great too on the outside. Adi scored the goal, but it was Kekuta’s pass in the middle that gave us that opportunity.”

FCC might need to do something similar to take the pressure off Richey on Thursday night and prevent Rooney from adding to his already expansive career highlight reel.

“It’s a collective thing,” said Damet. “It’s all about confidence. We try to communicate. We try to create that environment in training where players can get confidence from that. We were getting exposed in the first half on the left side (on Saturday). Kekuta went more central in our 4-3-3. The adjustment paid off in the second half.”

Kendall Waston’s efforts earned him a spot on the MLS team of the week and Fanendo Adi’s winner in the 83rd minute helped FCC do something only Seattle had managed to do this season, beat the Fire at home.

Adi came off the bench to score his first goal of the season. On Monday, Damet didn’t divulge Adi’s role for Thursday’s match against DC, but said he is still working toward full fitness.

“We’re still in this period where he’s coming back,” Damet said. “I’m very happy with him coming off the bench. He scored the winner this week. I’m very happy for that. We’ll see what we need to do this Thursday and Saturday.”

Yes, Thursday and Saturday. FCC’s roster received a boost with players returning from the Gold Cup, but with Frankie Amaya and others recovering from injuries, playing two matches in four days will be a challenge. On the positive side, both are at Nippert.

“Keep the momentum, is what we need to do,” Damet said. “We have had two great weeks. We have to keep working hard in training and show up on Thursday with the same mentality we had the last two weeks.”

Amaya is day-to-day with a knee injury, pausing an outstanding start to his MLS career. Damet said he’ll continue to be evaluated but there’s no timetable for a return.

“We are assessing him,” Damet said. “He’s doing better. We’ll see if we can have him back for the games this week.”

FCC is now tied with the Columbus Crew in last place in the Eastern Conference with 17 points from 20 matches and nine points clear of a playoff position.

Certainly, this is a much different FCC roster than the one that took a 7-1 defeat at Allianz Field on June 29. But since then, the mentality seems to have changed as well.

“I think our pride was hurt,” said Stanko. “I’ve never been scored on seven times. I think everyone just got so pissed off … excuse me, I don’t know if I’m allowed to say that, but we were mad. We just have had a different attitude in practice. Maybe that was a wake-up call for us.”