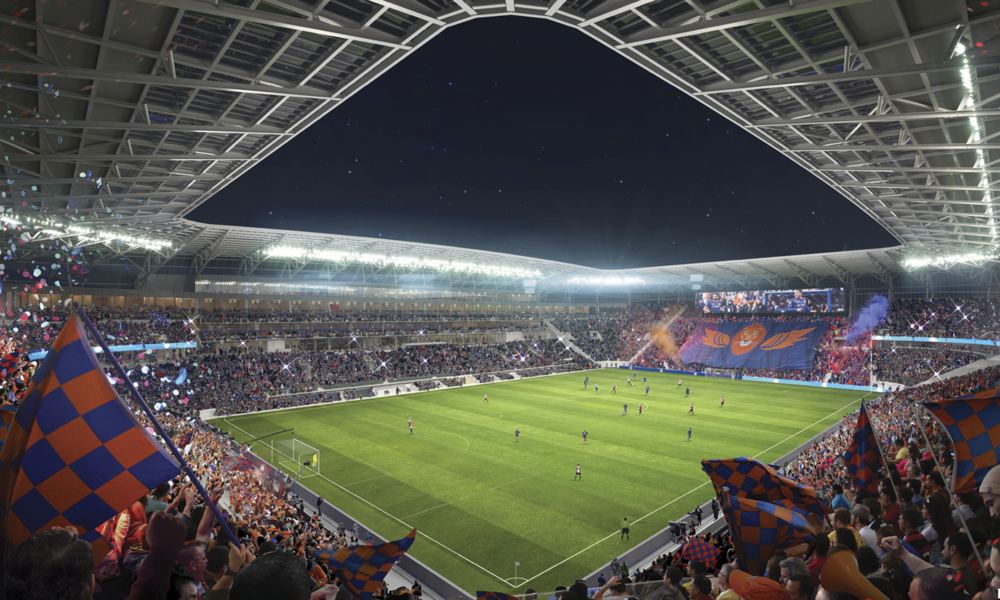 The final seating capacity of the West End Stadium will range from 26,000 to 26,500 depending on the selection of final design elements.

On Tuesday morning, FC Cincinnati released new renderings of the West End Stadium that is set to open in time for the 2021 Major League Soccer season. The renderings of the 250 million dollar soccer-specific stadium designed by Populous were the first to be released since March 2019.

The club’s goal for the West End Stadium is to create an iconic and groundbreaking design for the city while prioritizing and amplifying the fan experience. “We believe (the stadium) will stand as a true icon and unifying force in our city,” said FC Cincinnati owner Carl Lindner III. “Our deep passion for FC Cincinnati is to create a legacy in this city, contribute a positive impact on our community and help raise the profile of Cincinnati not only nationally, but also around the world.”

The West End Stadium will deploy a variety of unique external features to create a distinctive appearance not found in other professional sports stadiums. A total of 513 vertical fins will create a “wave-like” structure that will enclose the stadium, and unique LED lighting on each fin will help the stadium glow when lit for matches that occur in the evening. This lighting feature will allow unique motion sequences to be displayed on the east side of the stadium. Furthermore, a complete canopy roof will cover every seat in the stadium, protecting supporters from outside elements while leaving the field exposed to help maintain the authenticity of the game. Lastly, the main staircase into the stadium from Central Parkway rises 30 feet from street level, providing a grand entrance to help showcase the supporters’ march. 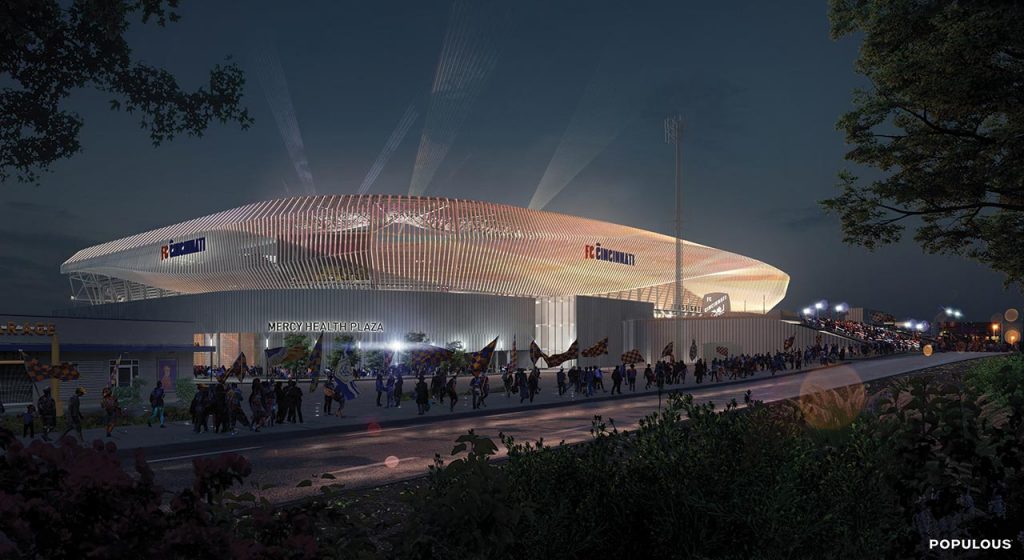 Internal features of the stadium include a 110-yard by 75-yard natural grass pitch, two video boards and two LED ribbon scoreboards that wrap around the mezzanine’s facade around the stadium. The nearest seat is just 15 feet from the field.

“We incorporated a lot of research and first-person feedback from fans and executives around the league with the goal of setting a new standard for both design and experience,” FC Cincinnati president Jeff Berding said. “We firmly believe we’ve not only matched the league’s best but pushed the bar further and will deliver a superior fan experience for our incredible fan base.”

The final seating capacity of the West End Stadium will range from 26,000 to 26,500 depending on the selection of final design elements. This projected capacity would make the West End Stadium the second-largest soccer-specific stadium in the United States, only behind Dignity Health Sports Park, home to the LA Galaxy. The seating capacity in the current design plan includes 3,100 safe standing seats in The Bailey that rise 34-degrees from pitch level and encompasses almost the entire north end of the stadium. In addition, there will be a total of 4,500 total seats located throughout the stadium in four distinct premium club areas. Each club area will have a unique design and varying levels of hospitality. The current design plans will also incorporate 59 total suites in the West End Stadium, the most suites for a soccer-specific venue in MLS.

“There’s a dedication and authenticity to soccer in Cincinnati that rivals any city in the U.S.,” said Populous Senior Director Jonathan Mallie. “Our design for FC Cincinnati harnesses the energy of the fans to create a world-class soccer atmosphere”.

What do you think of the new renderings of the West End Stadium? Let us know in the comments! Check out more pictures and renderings at the new westendstadium.com

This story will be updated as more information becomes available. Stay tuned to Cincinnati Soccer Talk for all breaking news related to the West End Stadium and FC Cincinnati.