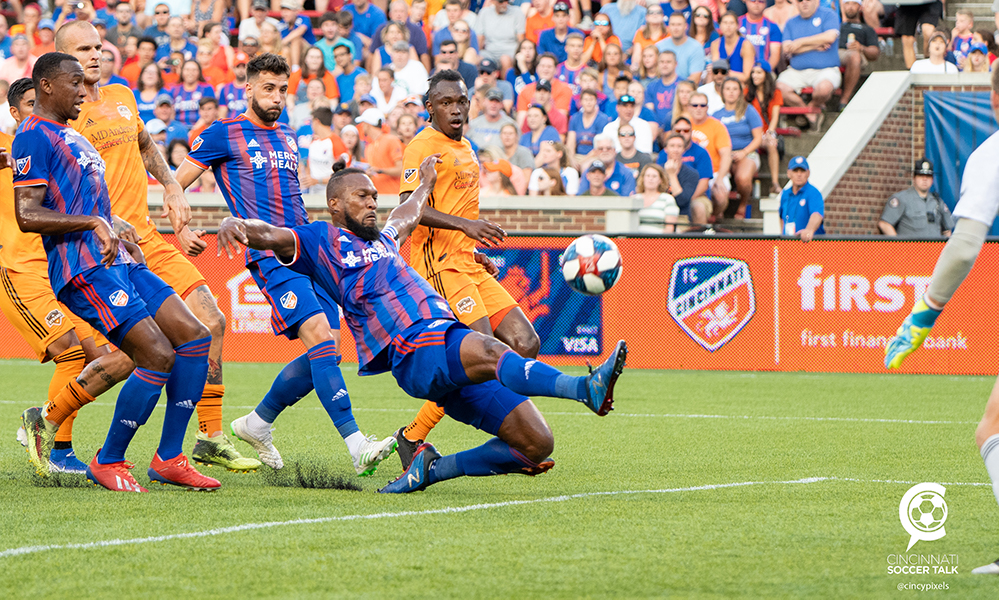 With the summer transfer window now open, don’t expect a quick fix for all the problems FC Cincinnati has encountered during its first season.

Listen, FC Cincinnati’s inaugural season in MLS is definitely going to be memorable. Just not for the reasons that the front office, the players or even the supporters want.

But then the puzzle remained incomplete, unfinished. The border was done, but the rest fell apart.

A series of bad coaching decisions, players out of formation, injuries and international call-ups have led to one of the most disappointing inaugural MLS seasons in history.

The losing streaks, unsettlingly low number of points and an unclear coaching future are key components playing into supporters worries about the future of FC Cincinnati as an MLS club.

When the season started, the city and the supporters had every reason to hope.

And then the first match happened. Which is a night that a lot of us would probably prefer to forget. But it was a match that, ultimately, would set the tone for the mentality of the remainder of the season.

Even with a draw against the reigning MLS champions and a 3-1 win at home during FCC’s inaugural home MLS match, there haven’t been many highlights.

In fact, if there was only one word that could summarize the FCC season at this point? It would be — struggle. To classify it as anything else would not only be a misrepresentation, but it would also be a lie.

Before entering MLS, the biggest discussion amongst sports journalists, athletes and every supporter was — is FC Cincinnati going to be more like Minnesota United, Atlanta United, or Los Angeles FC? How was FCC going to build from the ground up?

It’s important to remember that FC Cincinnati only had less than 250 days to prepare, while other clubs had more than twice that amount of time.

In fact, Minnesota had over two years from the day of its MLS announcement on March 25, 2015. Its inaugural match was in March 2017, giving it almost three times as much time to prepare as FC Cincinnati. With that extra preparation time, it finished ninth in the Eastern Conference with a total of 36 points. Minnesota’s record for its inaugural MLS season was 10-18-6.

Atlanta United, by comparison, had almost three years to prepare. Its MLS announcement came on April 16, 2014. Its inaugural MLS match was also in March 2017. It had almost five times as much time to prepare for the MLS season. Comparatively, Atlanta finished fourth overall in the Eastern Conference with a total of 55 points. Its record for their inaugural MLS season was 15-9-10. Atlanta even went on in its second season to become the MLS Champions.

LAFC is another club that dominated in its first year. Compared to FC Cincinnati, LAFC had three and a half years to prepare for its inaugural MLS season. Its MLS announcement came on October 30, 2014, with Its first match played in March 2018. LAFC set the tone for the right way to enter MLS by finishing third in their conference and fifth overall. It finished the season with 57 points and a record of 16-9-9. LAFC made major moves before entering MLS by signing Carlos Vela as their first Designated Player and Diego Rossi as their first Young Designated Player.

That’s an important point to remember for a multitude of reasons.

Building a club from the ground up, which is essentially what the front office was tasked with, takes time. And time is not something FCC had in abundance. There were roster, stadium and coaching decisions — all of which require research, knowledge, a conversation.

FC Cincinnati was not that lucky.

While the jump from the USL to MLS was swift and deserving (no matter what our neighbors to the south in Louisville and Nashville might have to say about that), it didn’t give us the time we needed to make a smooth transition.

So it isn’t a big surprise that it has been a struggle. But I don’t think anyone anticipated just how bad of a struggle it would actually be.

It was obvious from the beginning that people had doubts about the front office’s decision to keep Alan Koch as head coach for another year. There were many valid concerns raised, and these concerns were proven to be true. That led to Koch being let go in May, just two months into the season.

Having a coach that left the locker room uninspired and unmotivated had a direct effect on the players. Yoann Damet stepped up in the interim, and morale improved, but the club’s record did not.

In addition to the lack of morale, key players that have been crucial to FCC’s success have been on the injured list. Players like Garza, Roland Lamah and Fanendo Adi. These are players that make an impact on the pitch — maybe not in the amount of goals they score but in the mentality and camaraderie they bring.

And that wasn’t even all.

We just didn’t know how much.

And people can look at all of this and say it’s a bunch of excuses. But to me, excuses are made when there’s ample time to create a great product, when there are minimal roadblocks and when the result still sucks.

But facts are facts. And FC Cincinnati has dealt with a lot of issues this season. Those aren’t excuses — those are clear, proven issues that have directly affected the way this season has turned out so far.

So what am I getting at with all of this? Easy

The summer transfer window is open now until Aug. 7. What does that mean for FC Cincinnati?

This window means that clubs can transfer players from one club to another — pretty simple stuff.

But that gives FC Cincinnati a window of opportunity to correct the ship, aim it in a new direction — something. It will have the chance to sign players the club needs (hopefully a striker who can score and, you know, not get injured). And maybe that’ll put us in the right direction so we can end the season on a little bit higher of a note.

Additionally, the signing of a new head coach should be presented soon. General Manager Gerard Nijkamp revealed in a press conference last week that the next coach hired will be temporary. The contract will be for no longer than 18 months and help create a short-term solution. The hope is that the club will be much more competitive by the time the West End stadium opens in 2021.

A short-term head coach might present more problems than solutions, but that won’t be revealed until the future. It’s also possible that FC Cincinnati doesn’t sign anyone notable during the summer transfer window. A lot of things are possible, but we won’t know until they happen.

The bottom line is, this season sucks. Is it going to get better? We can hope.

The most important thing to remember: Don’t expect a quick fix. A lot of the issues that have happened this year could not have been avoided. Injuries like the ones the club has dealt with can’t be predicted. International call-ups can’t be predicted. Even though the record is disappointing, and the points are a lot lower than we’d like to see, the club is trying.

Now, people can argue and say that they’re not, but find me one athlete — just one — who doesn’t care if they lose. These guys have been athletes their whole lives, and I can guarantee you that they’re as unhappy with their record as we are. Their entire job is to win matches. The team is just as upset, maybe more so, than any of us. They want to bring us results just as much as we want to see results.

Being upset is understandable. As fans, obviously we want to see our club do better. But the season is halfway over. We have time to pick up the pieces and get some more points. The transfer window is here, a new coach will be announced soon and we just have to hang in there.

It has to get better. Because it can’t get much worse. Just hold onto hope. It’ll get better.