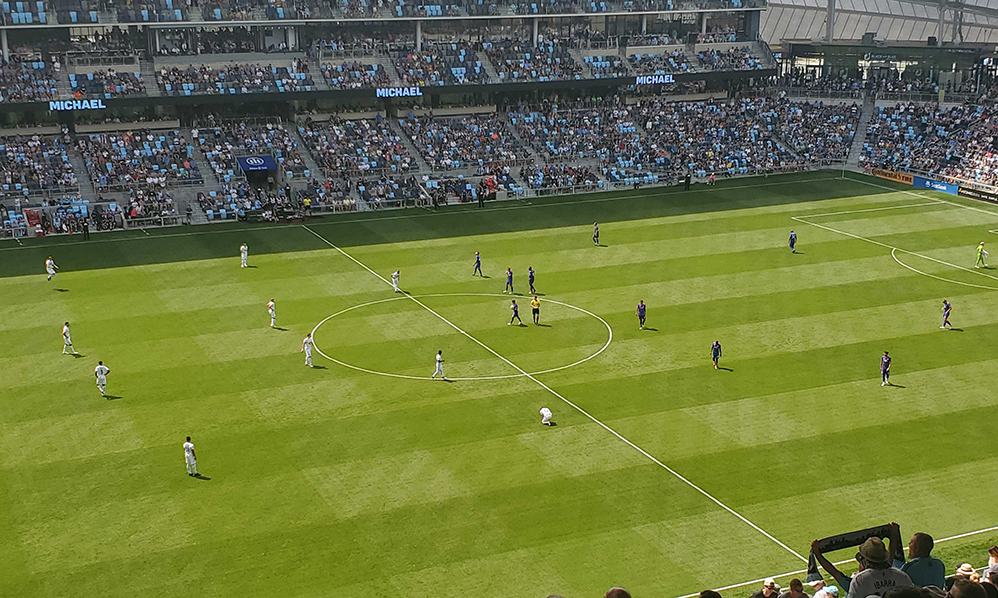 If you forget about the action on the field Saturday and took in the environment at Allianz Field, it’s easy to imagine FC Cincinnati’s future when the West End stadium opens in 2021.

SAINT PAUL, Minn. – Not long after FC Cincinnati took a 7-1 drubbing at the hands of Minnesota United last weekend, a few Loons fans encountered our battered souls wandering along tree-lined Grand Avenue, despite our best efforts to avoid anyone donning a Target logo.

If you’ve heard the expression “Minnesota Nice,” trust me, it’s a real thing. Insults were replaced with condolences, trash talk with sympathy — and not the condescending kind. The recurring message from MNUFC fans: “That was us, two years ago”.

The Loons’ building process isn’t complete, but it’s approaching its conclusion. And you don’t need a time machine to envision the possibilities for FC Cincinnati within the next two seasons. Just go to 400 Snelling Avenue in Saint Paul and dare to dream.

On a steamy, hot Saturday afternoon in what I consider to be the lovelier of the Twin Cities, a depleted FCC roster was beaten as bad as many expected they would be, with a fairly sizeable contingent of orange and blue-clad fans hoping to see at least one goal by the visitors. Thank you, Emmanuel Ledesma.

But thankfully, it was easier to ignore what was transpiring on the pitch on Saturday when you took time to consider the possibilities. Sitting in the upper deck at Allianz Field, you can look beyond the north end of the stadium and enjoy a panorama of the Midway Neighborhood, where modern structures share the streets with historic ones, and construction cranes, orange barrels and chain-link fences dot the area, indicating a neighborhood on the move.

It doesn’t take much to imagine you’re looking at the West End in 2021.

The former Metro Transit bus storage lot south of the Midway shopping center was once a barren construction site, much like the site of the old Taft High School football stadium is today. But the result was an economic engine for Saint Paul, which brought business, and vibrancy to a culturally diverse neighborhood that sits in a strategic location along the Green Line light rail which extends through Saint Paul to downtown Minneapolis.

Inside, Allianz conceals noise like a subway tunnel. Behind the south-end goal, nearly 3,000 Loons sound more like 10,000 lunatics. With safe-standing throughout the section and what sounds like a mostly aluminum seating structure, the volume is “The Bailey” multiplied by a locomotive, especially when United supporters join in the chorus of Queen’s ‘Bohemian Rhapsody’ during the second half.

The concourses at Allianz are wide, and the restrooms and concession areas are efficient, as you would expect for a soccer-specific stadium that is designed for two-hour sprints, not four-hour marathons. Allianz feels larger than its 19,400-seating capacity, which is about 5,000 or so seats fewer than what FCC has planned for the West End.

With all the concerns levied here about parking in the West End, it is interesting how scarce parking is around Allianz. In fact, fans are discouraged from driving altogether.

The least expensive parking option for Allianz is the Park-and-Ride at the Minnesota State Fairgrounds, where tailgating is permitted and shuttles run frequently to and from the stadium. Bus lines and the Green Line drop you off within steps of the gates. Or just take your bike. Allianz has 400 bike parking spots, right outside.

Game day at Allianz has a Wrigley-like feel, with fans walking to the stadium from just about every direction, along sleepy neighborhood streets and those lined with a variety of businesses with their doors open, both figuratively and literally.

Midway is littered with pubs, some of which have been around for a while and others that have sprouted up since. Once inside Allianz, you don’t have to look far for liquid refreshment. The Brew Hall in Allianz has 96 taps – which begs the question why they stopped so tantalizingly close to 100 – with 4,100 square feet of space, a sea of wide screen TVs and an expansive view of the pitch over the north goal.

There’s a manually operated scoreboard, an exterior skin that changes color, and depictions of the Loon – Minnesota’s state bird – is prominent pretty much everywhere. Even as we watched FCC stumble and stagger its way through Saturday’s match, it wasn’t too hard to put a positive spin on the proceedings.

This could be ours.

The West End could be Midway. Instead of Summit and Surly on tap at the Brew Hall at Allianz Field, Mad Tree and Rhinegeist could be flowing at a Brew Hall of our own. The thunderous noise produced by the ‘Wonderwall’ at Allianz could be coming from the future Bailey.

Maybe one day soon we will repay United for 7-1. I have seen the future, and it could be good.