Here’s a tactical breakdown of FC Cincinnati’s 1-0 loss to the New York Red Bulls on Saturday.

In their first game of a three-game road stretch FC Cincinnati showed some resolve and intent, working their way into a statistical victory… not the victory they needed, but a rare positive nonetheless. FCC won the possession battle 54%-46%, won more aerial duals, and had more successful dribbles. However, the 1-0 loss provided the orange and blue with zero points and zero goals from the run of play in five matches, and that’s the only statistic that really matters.

Soccer can sometimes be a game of small margins and individual moments, and the New York Red Bulls buried their only real chance of the match while FCC failed on at least three occasions. 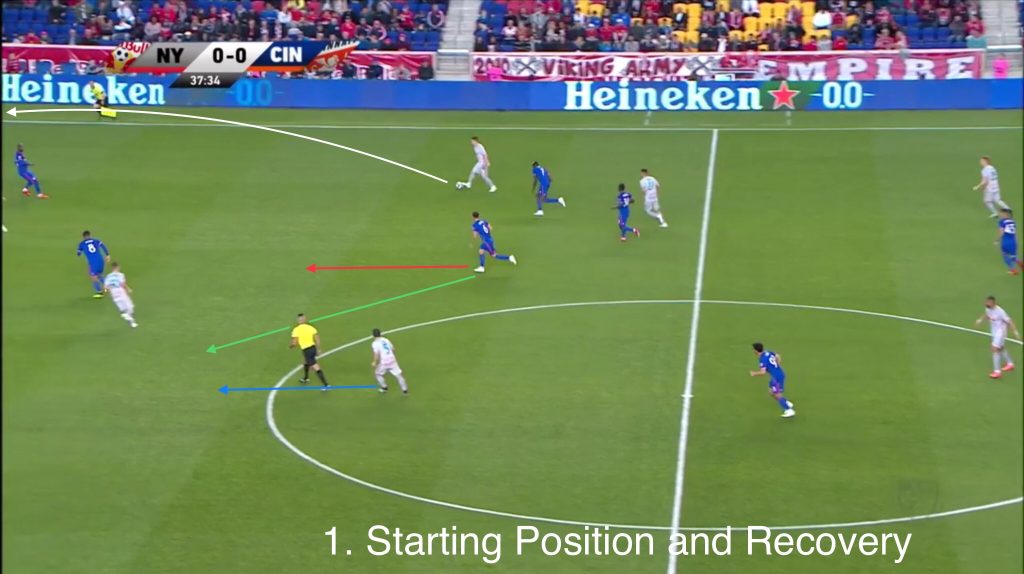 The only goal that the Red Bulls scored came off of their only shot on target. It all began unsurprisingly with a turnover in the midfield. More surprisingly was the fact that FCC was well positioned to deal with the transition… at first. All of the back four were in position, and Victor Ulloa was just in front of them. However, as Alex Muyl played the long ball into Brian White, Leonardo Bertone began his recovery run straight toward the goal, failing to realize that the only unaccounted for runner, Connor Lade, was his responsibility… and thus began the defensive breakdown. 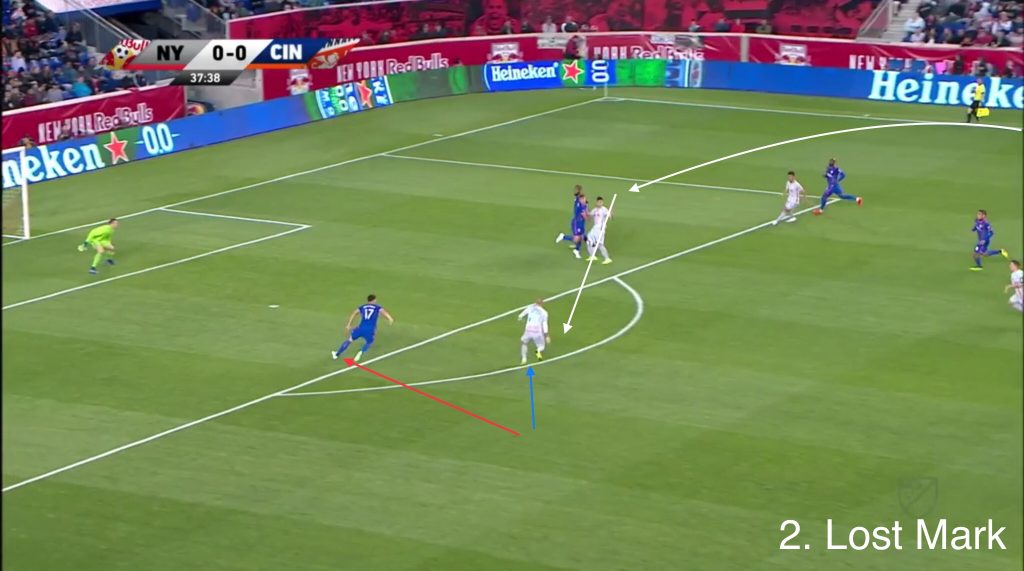 Next, as the FCC defenders dropped to deal with the long ball and Brian White leapt to win the first header the job remained the same – deal with the first ball in, and be in position to win the second ball. Here is where the second breakdown came. Mathieu Deplagne continued to drop toward goal as the runner he was marking, Danny Royer, was alert to the knock down from White. This provided Royer with the space to settle the ball and evaluate his options, while Deplagne was forced to defend on the back foot, expecting a shot on goal. And then… 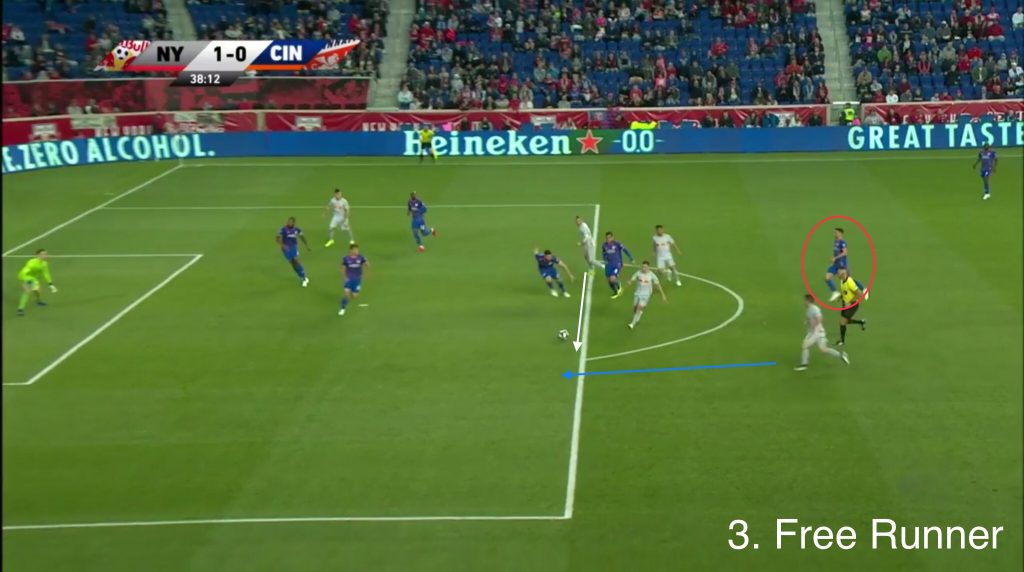 To say that the goal from the Red Bulls was strictly down to FCC defensive errors would be overstating the matter. The long ball in, the knock down from white, the back heel from Royer, and the finish from Lade were all things of beauty. However, the unforced turnover in the midfield followed by the inability of Deplagne and Bertone to track their runners provided the Red Bulls with the space they needed to execute the move. 1-0 to the home team.

FC Cincinnati had one of their best passing nights of the season, stringing together combinations, winning the possession battle overall, and getting behind the New York backline on several occasions. However, not having a true striker on the pitch definitely caused a lack of options in the final third. 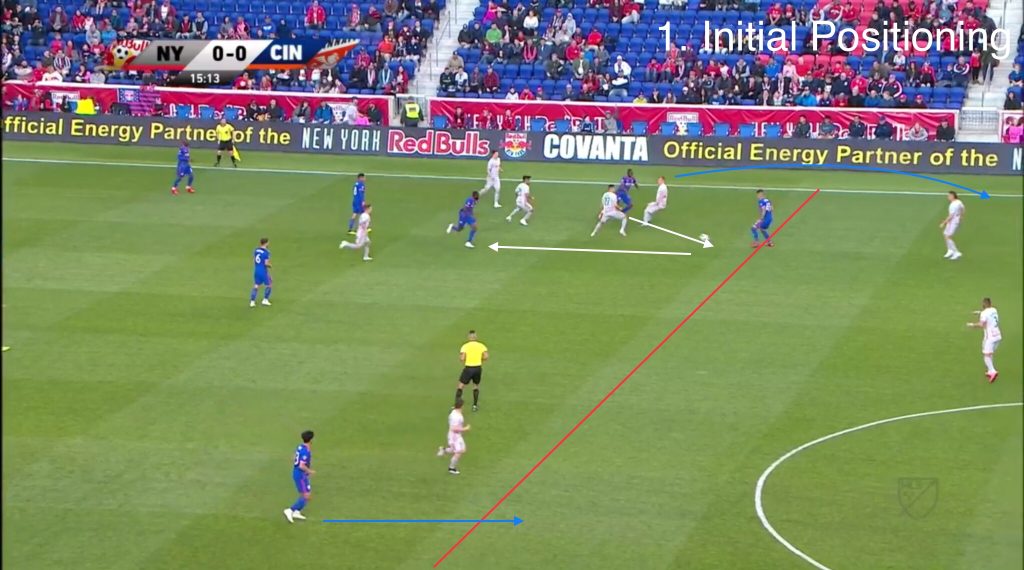 The move pictured above illustrates this point perfectly. The combination play started by Kekuta Manneh here began a counter attack that put him on the ball behind the Red Bulls defensive line. However, from the start the FCC attack had no focal point. Emmanual Ledesma, FCC’s lone forward, was the furthest man up the pitch some 20 odd yards inside of his own half. 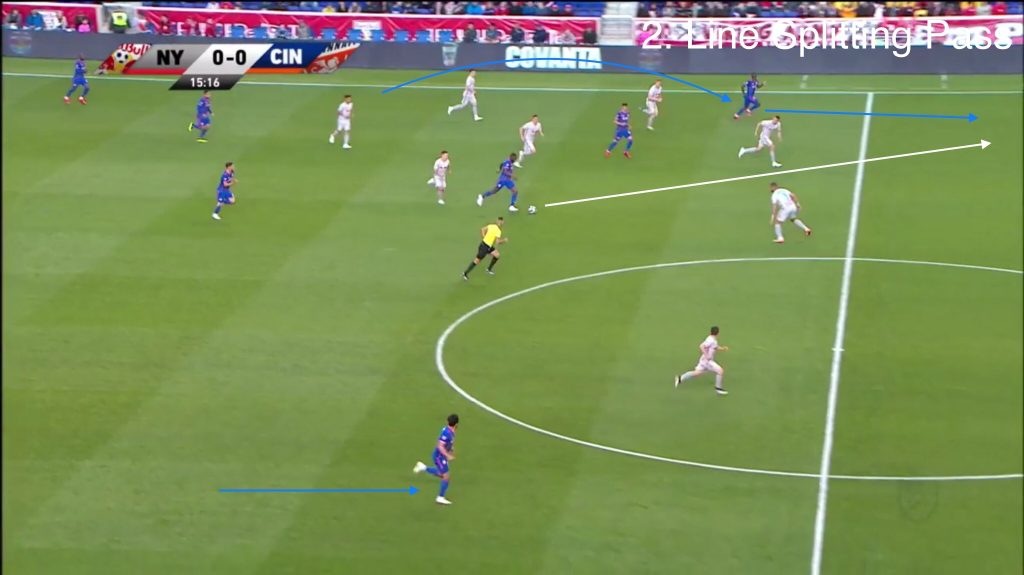 A simple three player combination freed Manneh up with a great line-splitting pass from Roland Lamah, and FCC was off to the races. This should have been, at bare minimum, a golden chance for FCC to open the scoring. 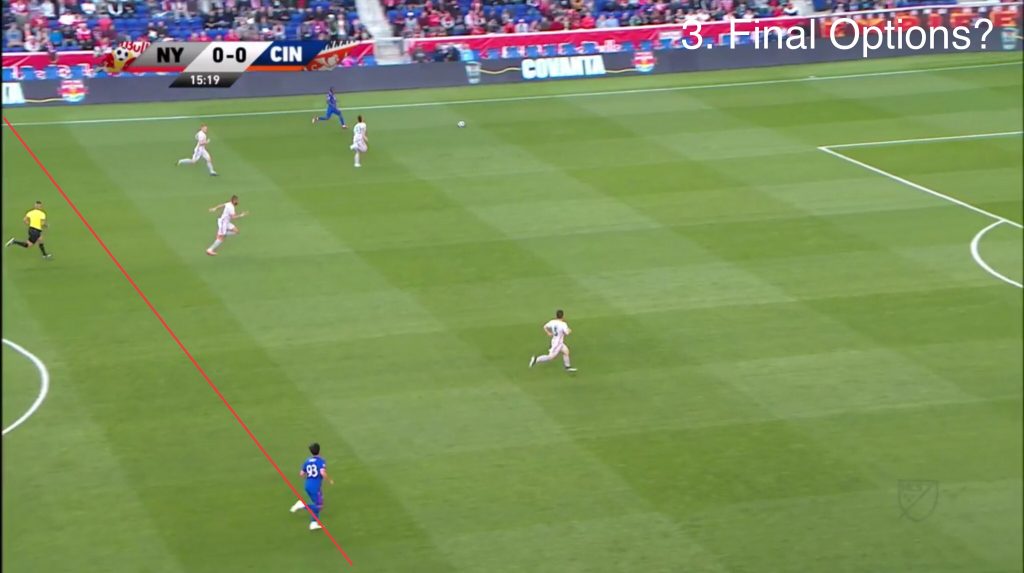 But, as Manneh collected the ball deep within the opposition half, the starting position of the FCC attack provided for no threatening options in the final third. Manneh instead had to hold the ball up and await the arrival of his teammates… and the rest of the Red Bulls defense. No cross, no shot, no chance.

As stated above, FCC won the statistical battle in nearly every category, except the one that determines who actually gets the points. In transition, players often didn’t have a clear understanding of where they should go, and instead resorted to running in straight lines down the field. 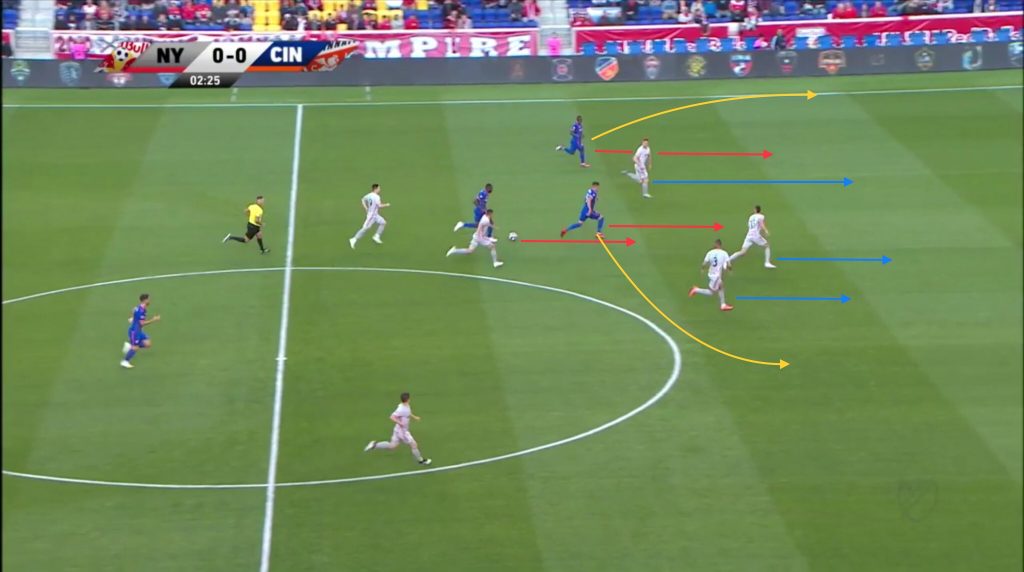 The image above shows an opportunity early in the first half that ended with a fairly tame Roland Lamah shot from distance. Lamah dribbled with speed toward goal, and both Manneh and Ledesma ran with speed right along with him. The Red Bulls defenders were not given any decisions to make, and were allowed to simply drop straight toward goal. Varying runs in any direction could have opened the field for Lamah, dragging the defenders into awkward positions and creating the potential for mistakes.

Later in the game Darren Mattocks was gifted the best chance of the match, which he sent into the post. This one may have simply been an inability of the striker to convert, but again, he didn’t have any other choices than to fire a shot toward the net from a tough angle. 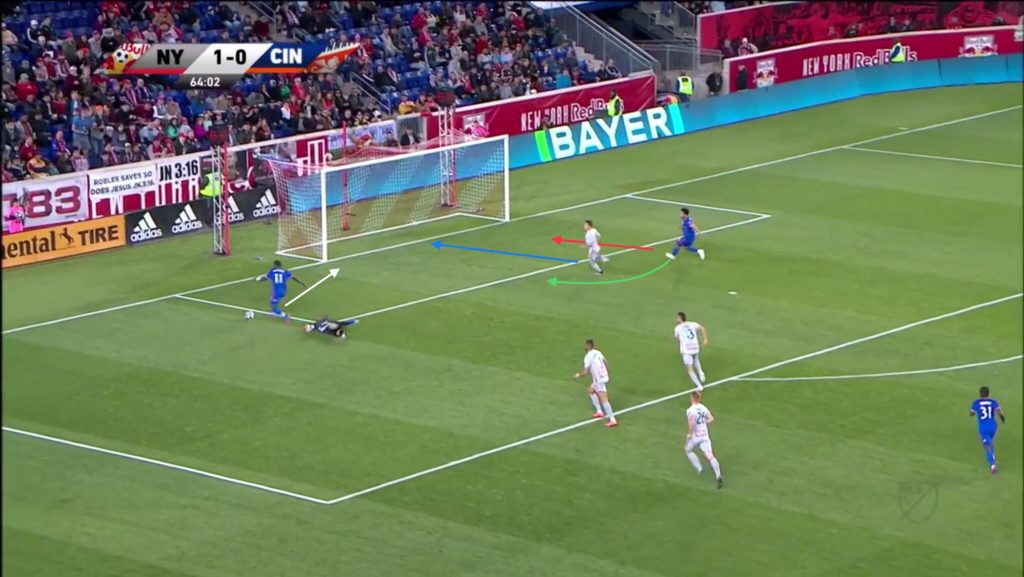 As Mattocks rounded the keeper, Connor Lade had no choice but to make a b-line for the net in hopes of stopping a potential game tying goal. Kenny Saief made the choice to run straight in behind him. If Mattocks chose to try to pick out Saief, Lade intercepts the pass. Therefore, his only option was to shoot. Had Saief made the decision to delay his run slightly and curl toward the top of the six, Mattocks may have still slammed the ball against the near post… but he may have cooly pulled the ball back for an easy finish.

Individual mistakes, mental errors, and an inability to finish have plagued FC Cincinnati for much of this season. As the games come faster and points become more crucial we can only hope that Alan Koch and company can start doing the simple things to give the team a chance to earn a few.