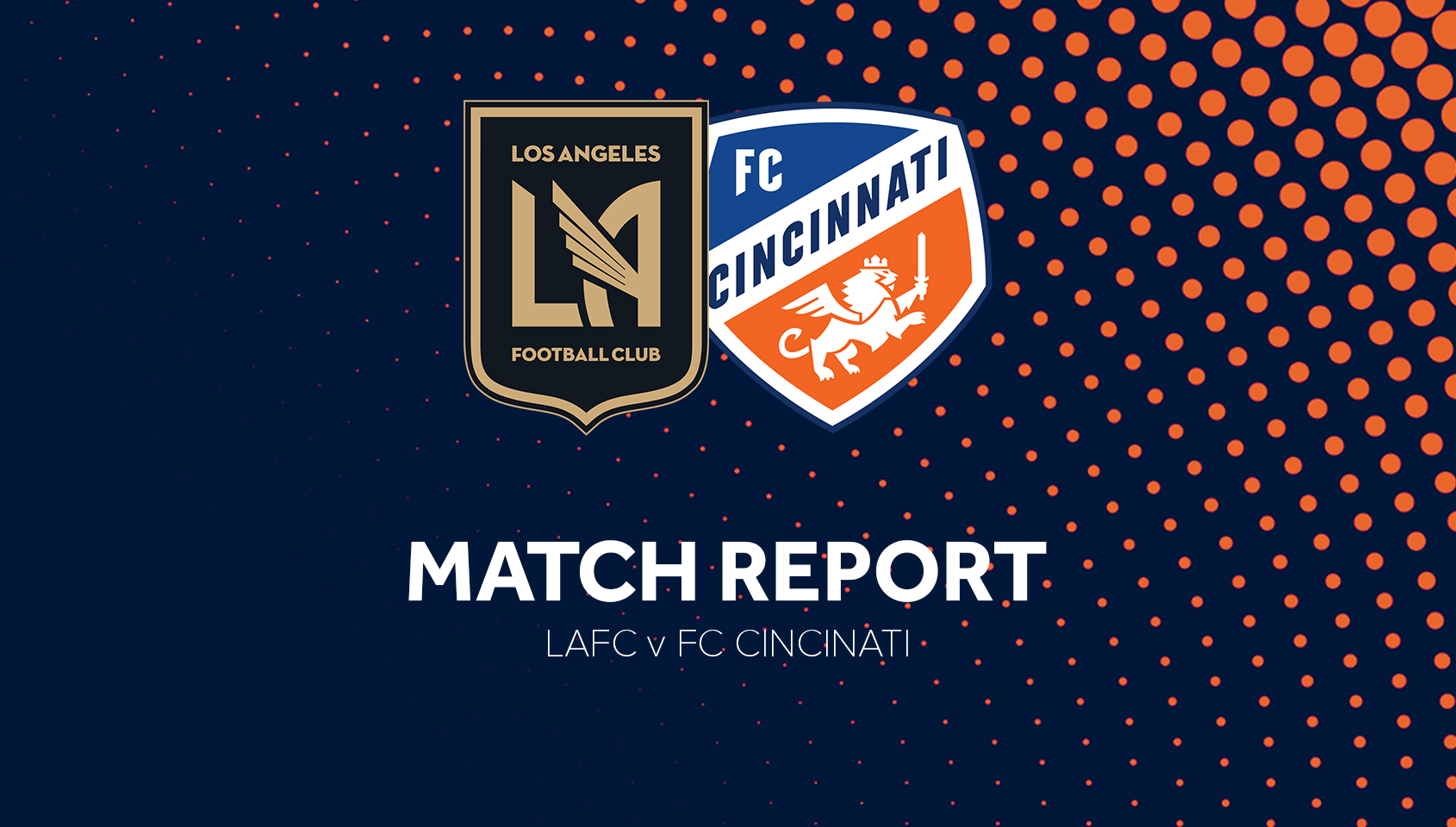 FC Cincinnati faced off against Los Angeles FC late Saturday at Banc of California Stadium in Los Angeles. LAFC is undefeated in the 2019 season, and FCC relied heavily upon their dependable back line to stop the forward forces of Carlos Vela and Diego Rossi.

Caleb Stanko and Justin Hoyte got their first start for FCC at midfield and left back, respectively. Greg Garza and Alvas Powell were unable to travel due to injuries.

LAFC came out on the attack, and within the first three minutes Vela had a shot on goal. Spencer Richey protected the box with a strong block, shutting down what could have been an early-match score. Minutes later, LAFC was on the attack again, but FCC defender Mathieu Deplagne was at the goal to block.

While LAFC had the FCC defense on its toes, Darren Mattocks and Kekuta Manneh tried to push the Orange and Blue forward. Kenny Saief was taken down outside the box, and FCC was awarded a free kick. Kendall Waston headed it forward, but the ball went just wide, and the match remained 0-0.

LAFC kept the ball at its feet, maintaining possession and pushing the ball forward and keeping the FCC defense on its toes. Nick Hagglund had a strong block in the 15th minute, resulting in an LAFC corner kick that was blocked.

Christian Ramirez of LAFC had a chance in the 22nd minute, but Waston blocked his shot inside the box. Minutes later, LAFC’s Eddie Segura got tangled up in the air with Mattocks, but no injuries were reported.

Mattocks dribbled down the pitch, evading multiple LAFC defenders in what could have been one of the stronger offensive moments for FCC. But LAFC was right there, the ball turning over without any result.

In the 30th minute, Waston was booked with a yellow card, his second of the season. Vela stepped up for the free kick for LAFC. Vela got tangled up in the box with Manneh, and the final decision was left up to the video assistant referee. VAR confirmed that the play would be checked for a possible penalty kick due to location inside the box. A penalty kick was denied, and LAFC was awarded a corner kick. Mark-Anthony Kaye headed the ball into the net to put LAFC on the scoreboard first in the 32nd minute.

LAFC continued to build off of that momentum and pushed the FCC defense as hard as it could. But FCC’s back line was up to the challenge, with Waston blocking another shot. Walker Zimmerman was fouled for a scuffle with Saief in the 36th minute. Saief stepped up to take the free kick, but FCC was unable to capitalize.

Mattocks and Saief got the ball in the box, Mattocks taking a shot that was barely blocked by Tyler Miller. The block resulted in a corner kick for the Orange and Blue in extra time, but it was deflected. The score remained 1-0, LAFC in the lead, at the half.

The second half started out similar to the first, with LAFC putting the pressure on FCC’s defense. Rossi came out with a purpose – to score — but was shut down by Hagglund and Richey. LAFC kept possession, and FCC struggled to keep up with the pace.

Manneh dribbled his way through the LAFC defenders for a shot in the 53rd minute, but Miller easily blocked it. FCC was hungry for the equalizer but couldn’t capitalize on its chances. The best opportunity came in the 60th with a pass from Mattocks to Saief, but the shot was just a couple of feet wide. The score remained at 1-0.

FCC was awarded a free kick in the 63rd minute, but it was a missed opportunity. Roland Lamah was subbed in shortly after in the 68th minute, replacing Allan Cruz and giving FCC more firepower offensively. LAFC managed to minimize FCC’s offensive opportunities. Alan Koch made the decision to sub in Victor Ulloa, replacing Stanko, to shake up the lineup a bit.

FCC was awarded a free kick in the 80th minute, taken by Saief, and Waston got his head on it – but it just barely missed the frame. While FCC has had a few chances to capitalize, its aim has always been just a little off.

Frankie Amaya made his way onto the pitch in his hometown after Manneh was subbed out after a harsh collision. Amaya took the pitch in front of 50 family members and friends in hopes of helping his club get some points on the board.

FCC wore down LAFC’s back line, slowing down their pace just enough to prevent it from scoring again. Mattocks had a shot in the 91st minute, without room to pass to Lamah, but it was just outside the post. But luck was on LAFC’s side in the 94th minute when Vela finally capitalized on a shot, making the score 2-0 in extra time by the sound of the final whistle.

LAFC kept FCC on its toes throughout the match; it maintained possession and kept the pace quick and fierce. FCC entered the match well aware of how LAFC was an attacking force that needed to be stopped. LAFC had scored 19 goals in six matches so far in the 2019 season, including a 4-0 win against DC United. While FCC fell to the undefeated MLS club, it managed to keep the pressure on its offense and slow it down just enough to prevent the match from being a bloodbath.

FC Cincinnati returns to Nippert Stadium on Friday to take on Real Salt Lake at 7:30 pm.