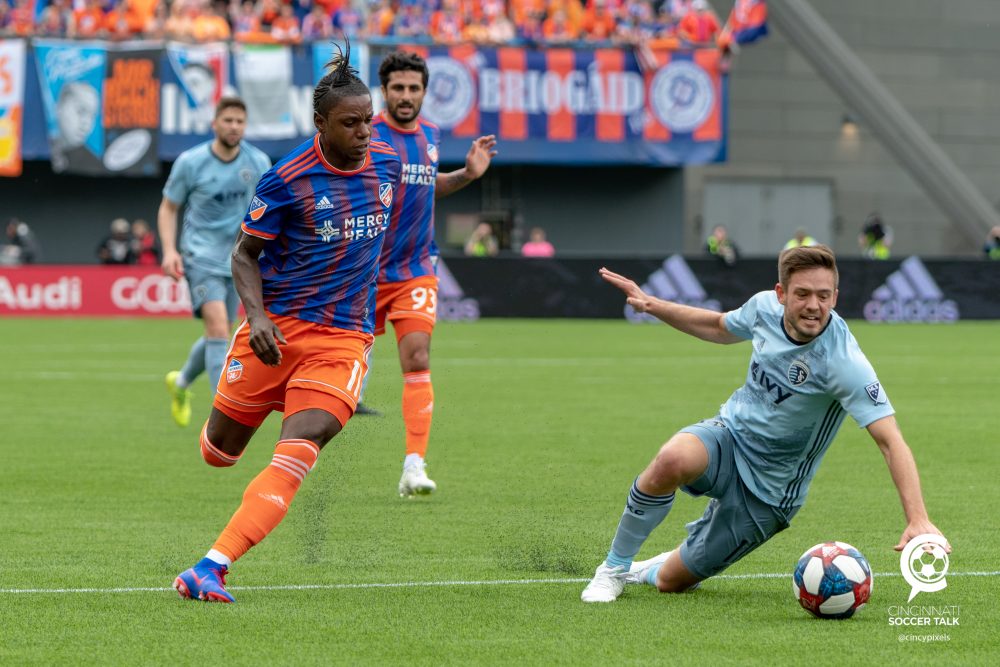 On the neighborhood streets of Portmore, a large coastal town in southern Jamaica, it was not unusual to find a young Darren Mattocks and his friends playing soccer. They honed their skills on hard pavement and gravel, while dodging the occasional passing car and using rocks to represent the goalposts.

“We played from morning to night sometimes,” he said.

Mattocks spent so much time during his youth playing the sport that it’s hard to fathom that it wasn’t his first love. The FC Cincinnati forward began his athletic career in track and field, but while watching his older brother’s soccer matches, Mattocks decided to see if he too could play soccer competitively.

It wasn’t long before Mattocks learned that the lightning speed and athletic prowess that helped him excel in track translated well to the soccer pitch.

“I started playing organized soccer very late, I think I was 12 or 13,” Mattocks said. “I adapted very well. I liked everything about it. I liked being there with my teammates. I especially liked scoring goals.”

On Sunday, Mattocks scored FCC’s first-ever penalty kick as an MLS team in the 19th minute of a 1-1 draw with Sporting Kansas City. Mattocks led all FCC players with four shots and three shots on target during his 82 minutes on the pitch, earning him a place on MLS’ team of the week.

Mattocks, 28, never envisioned being in Cincinnati, helping lead the attack for an expansion club in its first season. After six combined seasons in Vancouver and Portland, Mattocks appeared to have found a home in Washington, D.C. where he scored eight goals in his first 14 matches in 2018.

But in late June, things abruptly changed when D.C. signed England legend Wayne Rooney, and Mattocks was relegated to the bench in favor of the former Manchester United and Everton star. The writing was on the wall, and as the season wore on, the frustration continued to build for Mattocks.

“Going from pretty high to pretty low very, very quickly,” Mattocks said. “It was very frustrating for me. I set out to score 20 goals and felt like I was right on track to doing so. Things changed and I wasn’t playing at all. At one point, I’m like, ‘I can’t even get a chance to play, even though I’m leading the team in scoring?’.”

It was time for Mattocks to move on and FCC selected him with their first overall selection in the MLS expansion draft.

He has appeared in each of FCC’s first six games including two consecutive starts with Fanendo Adi out. Alan Koch said FCC is happy to have him.

“He’s super unique,” Koch said. “Darren is a charismatic guy. You can see the energy he brings to the table. He wears his heart on his sleeve. You can see it when things are going well for him. You can see it when he has some tough times too. He was doing very well in D.C. and a guy named Wayne Rooney comes along and takes his job. It’s hard for any player to compete with Wayne. But Darren doesn’t have anything to prove from that perspective.”

For all of his natural ability and skill, it’s Mattocks’ perspective on work and life that has helped carry him through the ups and downs.

Whether it’s a good day of training or bad, a match won or lost, Mattocks focuses all of his attention on his three-year old son, King, who serves as a daily source of motivation.

“I didn’t have my dad when I was growing up,” Mattocks said. “I need to be a good role model for him. There’s life after soccer. I want to make sure I’m in my son’s life.”

After a rough first couple of months, Mattocks said he finally feels settled in the Queen City and he credited the club and his teammates for helping expedite that process. Most importantly, Mattocks believes his comfort level in orange and blue is beginning to translate to the pitch.

“Things went south for me pretty quickly in D.C. and Cincinnati kept calling (and) telling me how great of an opportunity this was,” Mattocks said. “Things happen for a reason. It happens in life, not just in sports. This is a fantastic city, a fantastic fan base. Hopefully, it works out for me in Cincinnati. So far so good.”