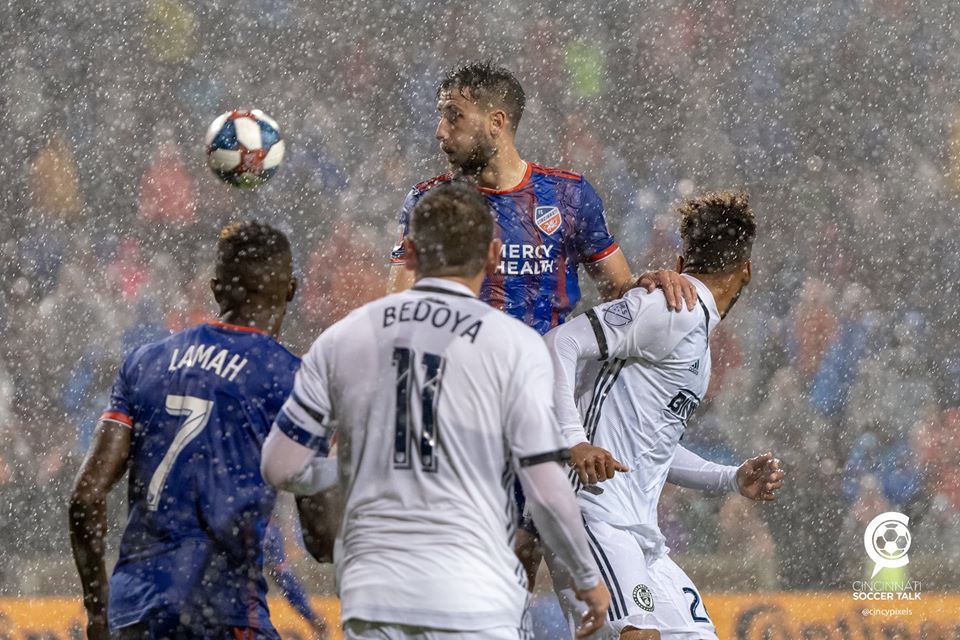 Here’s a look at our player ratings for FC Cincinnati’s 2-0 loss to the Philadelphia Union on Saturday.

Sunday night, FC Cincinnati lost its first match at home to the Philadelphia Union. Marco Fabian and David Accam were the goal scorers for the Union. In addition to our Match Report, we will recap each individual player performance for the match.

FC Cincinnati rolled out a 4-4-2/4-2-3-1 with Roland Lamah and Allan Cruz dropping into a line of four on defense with Leonardo Bertone and Victor Ulloa. Darren Mattocks got his first start at forward and was often paired up top with Kekuta Mennah.

Although he gave up his first goal in over 300 minutes, Spencer Richey had another quality night in goal for the Orange & Blue. The Union had three shots on goal for the game but you couldn’t place much blame on Richey for the two goals conceded. My biggest takeaway was his command of the box, especially in the first half. There were periods where he was consistently under threat, and he came out several times to collect or punch the ball away. Hard to imagine many other keepers doing better on a miserable weather night under constant threat.

32’: The kid turned away but he earns the Union its sixth corner of the night.#CINvPHI 0-0 | #DOOP | #ThisIsPhilly pic.twitter.com/cKFcqJkKeE

Mathieu Deplagne had the lowest API in the match at -107, but I thought on the defensive side of the ball, he was adequate. With the Philadelphia Union keeping their defensive shape compact, Deplagne had little ability to get up the wing to Allan Cruz. With little space, I counted a minimum of 10 passes over 15 yards that he didn’t complete. A lot of that had to do with the wet turf and the Union pressure, but the right side was a log jam when it came to getting the ball forward.

Poor Nick Hagglund didn’t stand much of a chance when the ball was deflected to Accam just before his goal. The highlights will show Hagglund getting victimized by one of Accam’s filthy cuts, but overall the Cincinnati native had a decent match. With the back line under threat all night, he held up for most of the match. Accam’s goal was an individual moment of brilliance, and on Fabian’s goal, Hagglund was in the correct spot on Fafa Picault, leaving Fabian free at the top of the box. The most underrated aspect to the center back’s game thus far has been his ability to get low to block shots. His three blocks, five clearances and four tackles were either first or second among all defenders. With late defending key as this team gains familiarity with each other, Hagglund will be counted on the be a key player in the back line.

Like Hagglund, he was sent scrambling on Accam’s goal, but Forrest Lasso’s 728 API came in second behind Marco Fabian. Lasso and Hagglund made things tough once again on opponents, with Lasso clearing eight of the Union’s 16 total crosses. He won six aerial duals and kept Picault under wraps for the night. Through five matches, FC Cincinnati has been outpossessed in each one, but with pieces like Hagglund, Waston, and Lasso, coach Alan Koch has to like the chances of his center back pairing keeping his team in matches.

The tactics employed by Jim Curtin and the Union made things difficult for the U.S. international all night. With two high forwards in Picault and Accam along with Fabian playing a high line in the attacking midfield, Greg Garza had to stay at home in the left-back role for most of the match. If he were to go forward leaving the back line three on three, it would have been even more gruesome for the home team. My score of six reflects the difficulty of being tasked to stay back on defense and being picky when to get forward. He almost put the home team in the board in the first half when he sprung Roland Lamah but Lamah was slightly ahead of the back shoulder of the Union defender. Garza didn’t do anything spectacular but was hardly at fault on the two goals conceded.

I’m conflicted about Ulloa on the night because, for most of the match, he was the best player for FC Cincinnati. His work rate is high, and his ability to win the ball in tight spots helps spring the counter-attack. But if you are looking specifically at the Fabian goal, he was responsible for not getting back in time to mark the midfielder. I feel as of right now Ulloa is tasked with so much, especially against a player of Fabian’s caliber, that Ulloa needs more help from his teammates. That doesn’t even need to come from help on a double team, but he can’t be let hung out to dry when the front four turns the ball over. Tough night to pick out much positivity but overall, I think Ulloa has been a revelation in Cincinnati.

It’s tough to give a central midfielder a high score when the club had such a difficult time transitioning the ball into attack. Bertone had a lot of defensive responsibilities and wasn’t helped out by the front four when he did get into the attack. When Kenny Saief came into the match, you saw Bertone move higher up the field and get into the match. It can’t be understated the effect that Roland Lamah, Kekuta Mennah and Darren Mattocks not being able to hold onto the ball had on the team. When Koch brought on Saief, it opened up passing lanes for players like Bertone and Frankie Amaya. If FC Cincinnati can figure out how to hold onto the ball, you will see Bertone’s work rate and distribution skyrocket setting up the potential for a solid attack.

Saturday night was a mixed bag for Roland Lamah. While he disappeared for large periods of time, he had the only shot on goal in the 51st minute, forcing a nice save from Union keeper Andre Blake to keep the game at 1-0. Lamah had a lot of Orange & Blue fans cheering in the 27th minute when he put the ball in the net off a Greg Garza pass, but Lamah was clearly offside on the play. My biggest issue on the night for Lamah was his inability to get the ball forward and link play with Mennah. He had three positive passes on the night and an overall 65% passing rating. That is just not good enough when he needs to step up and play a primary role on offense.

Allan Cruz had a busy week on international duty with two matches for Costa Rica, but with injuries late in the week was thrust into the starting XI. The midfielder again was out of his preferred central position and had a quiet night for the Orange & Blue. You can see his technical ability in moments where he’s given little space by the opponents and can come away with the ball, but like the rest of the squad, he had little ability to break Philadelphia’s press and get the ball forward.

The speedy midfielder was “stuck in the mud” for most of the night on Saturday. With little time on the ball and a slow pitch, Manneh was unable to utilize his trademark speed to get behind the Philadelphia defense. He was unable to create any chances for FC Cincinnati and was taken out early for Saief. Once he was removed, it looked like he was headed straight for treatment from the FC Cincinnati staff. Mennah has been dealing with lingering ankle issues, and it looked like the conditions Saturday might have played a role in his disappointing effort.

The Jamaican straight off international duty had a tough assignment against Philadelphia. Like Lamah, he was a non-factor in the match with FC Cincinnati failing to get him the ball up the pitch. Mattocks had difficulty as the holdup striker, meaning FCC was under pressure the entire night. This has been a different role asked of him the previous matches where he’s had the freedom to move off the ball and pick combinations with his teammates. The weather didn’t do him many favors, and travel from the international break looked to have taken a step from the player as he was missing the explosion we’ve seen from him. I am still high on Mattocks but maybe this performance might quiet some of the noise percolating amongst FC Cincinnati supporters for him to replace Adi in the starting XI when healthy.

First of all, I’d like to disregard his API on the night. In some cases it makes sense but this one doe not. After two stellar appearances to begin his FC Cincinnati career, Kenny Saief was a surprise to see on the bench Saturday night. He was inserted into the match in the 59th minute and was the main reason that FC Cincinnati was finally able to get some time on the ball (14 of 15 in passing). His off the ball movement sets a tone as well and gives players around him confidence. That stuff doesn’t show up in his API, so that’s why my score doesn’t coincide with a -2. We don’t know if coach Koch was limiting his minutes early in the season, but he could have played a much bigger role in a team screaming for help with possession.

Caleb Stanko came into the match when it was already decided, and there isn’t much to take from the performance. He is solid on and off the ball, and as I said last week, every competitive minute he gets is big for the American. There is a log jam in midfield right now and while he’s still building stamina from a limited offseason, the tell-tale sign from Stanko will come in June when the club is missing several players to the Gold Cup.

The first pick in the 2019 MLS SuperDraft made his professional debut Saturday night. It was Frankie Amaya’s first time named in the matchday 18 for FC Cincinnati. He got his feet wet in the 76th minute and helped the club possess the ball from a brief period of time He was 16 for 19 in passes (93.8%), and you can see his technical ability on the ball. It was a solid debut in a tough situation for the 18-year-old.

The streak of three impressive results ended Saturday night for Koch. To be fair, he was dealt a tough hand this week between the weather, injuries and players returning from international call-ups. In the last three matches, Koch kept his squad in the match by deploying a deep defensive block. In this match, the incessant rain slowed the speed of the pitch which limited FC Cincinnati’s ability to break on the counter-attack. Outside of the Saief substitution, Koch was limited in the personnel changes he could make to influence the match, so it’s hard to make too many long term judgments from Saturday.