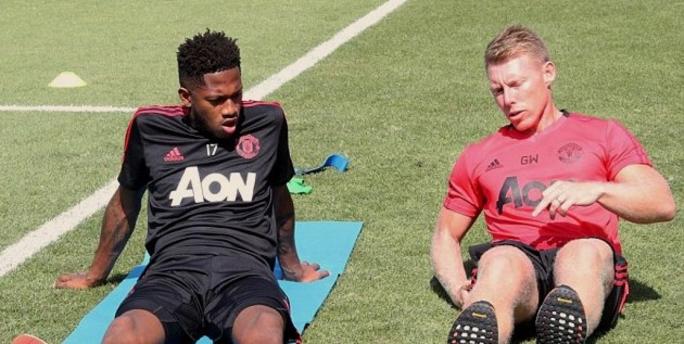 Former head of strength and conditioning at Manchester United is leaving after 11 years to come to FC Cincinnati. He will take on the role of director of sports performance.
Photo credit – http://trainingground.guru

FC Cincinnati has hired Gary Walker as their new Director of Sports Performance. Media previously reported that Manchester United’s head of strength and conditioning Gary Walker left the Premier League giant after 11 years with the team to take on a new role with FC Cincinnati. This role is likely to oversee FC Cincinnati’s current sports performance division, which currently has 10 staff members on the club website. The most well-known staff member is Austin Berry, a former USL player with the club.

Walker had been with Manchester United for 11 years. He started there in 2008 as a sports scientist and a strength and conditioning coach. After two years at this position, Walker got promoted to the position of head of strength and conditioning in 2010. Before his time at Manchester United, he was a physiologist at the English Institute of Sport. Walker was at this position for just under a year.

Walker is moving to MLS to come to Cincinnati as the Director of Sports Performance.

All good things must come to an end. After 11 years, the time has come to leave this great club. I’ve had some amazing experiences @ManUtd and made some incredible friends and memories.

A huge thank you to all of the managers, staff and players that I have worked with ❤️

The immediate reaction is that Walker is an impressive signing by the first year MLS club. FC Cincinnati is currently building its training facility as well as its staff. Manchester United is one of the largest clubs in the world. For Walker to see Cincinnati as an advancement in his career speaks volumes for what Cincy is building. Walker will also have his hands full overseeing the launch of Cincinnati’s new training facilities and being responsible for player personnel. Players like Greg Garza, Fernando Adi and Przemysław Tytoń have all recently suffered injuries and will likely still undergo treatment moving forward. The following list is what FC Cincinnati is requiring from the new Director of Sports Performance.

“We’re thrilled to add an expert with Gary’s credentials to our staff,” Berding said. “Gary comes to us with the highest regard from the football community and we’re excited to get his insights and expertise working for FC Cincinnati. Gains in sports performance are a key differentiator for successful teams. With Gary leading us in this discipline, we’re looking forward to being on the forefront as we build out first-team programs, our FCC Academy and our facilities at the new Mercy Health Training Center in Milford.”

“Speaking to the people that are involved here, it’s a really special project,” Walker said. “It’s a new opportunity for me to come here and work with great staff and people that are really motivated to get this project up and running. Everything I’ve seen about Cincinnati, the fans, the people, they love football, they love soccer. I’m really excited to be part of it.”

Primary Responsibilities from Velvetjobs include,