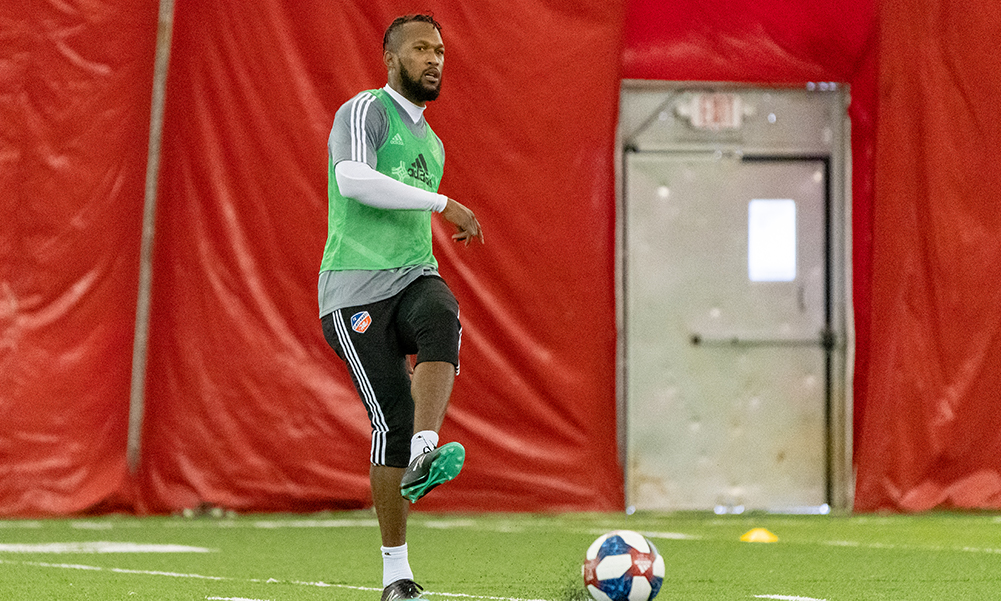 The sweat dripping from FC Cincinnati defender Kendall Waston’s brow after training on Wednesday morning did little to distract from the smile on his face. At 6-foot-5 and a sculpted 195 pounds, Waston is an imposing figure, until you start speaking with him. It’s then that his personality shines through, and his enthusiasm becomes infectious. You wouldn’t want to be on the receiving end of one of his crunching tackles, but Waston is just the type of warrior you want wearing your colors.

“Felt amazing,” Waston said of his first training session in Orange and Blue. “So anxious to be here from a long time ago. Finally, I can be with my teammates, enjoying learning, put in the hard work that we need to have a great preseason.”

FC Cincinnati coach Alan Koch, who got to know the 31-year-old Costa Rican center back during his time in Vancouver, then sought him out. Waston wanted a new challenge after five seasons in Vancouver, and the Whitecaps took $450,000 in general allocation money and $300,000 in targeted allocation funds and ran.

“I heard a little rumor about it,” Waston said of the deal. “I knew the coach from when he was in Vancouver, Pa (Konate) and (Fanendo) Adi, so I was thinking Cincinnati would be a wonderful place to go. When I got that notice that I was coming here I was happy, my wife was as well. I’m just excited. I want the season to start and see the fans and enjoy it with everyone.”

Waston (it actually would have been “Watson” had it not been for a clerical error by his grandmother registering his father’s name) has scored 42 goals with 18 assists in 260 appearances, including 242 starts, across all competitions. He was named to the MLS Best XI and was Vancouver’s player of the year in 2015 and 2017. He was an MLS All-Star in 2016.

With the Whitecaps, Waston scored 15 goals and added four assists through his five seasons. He made his World Cup debut this past summer and scored Costa Rica’s first goal of the tournament in a group stage match against Switzerland.

On Wednesday, Waston deflected a question about whether he was playing the best soccer of his career. This is where the humility shows.

“I don’t want to be in a comfort zone,” Waston said. “I want to challenge myself. The World Cup was amazing, but it’s past. I want to think in the present and in the future. And to have a better future but I have to work hard.”

On the pitch, Waston sheds his “gentle giant” persona. During his five seasons in MLS, Waston has earned five red cards and been booked another 39 times. Three of his red cards came during the 2016 season. The past two seasons, he’s been sent off just once. He credits maturity for that.

Waston also is dangerous in set pieces. His career scoring numbers attest to that. But he’s not here to drive the ball in the net necessarily. He’s here to prevent the opposing club from doing so. The backline FCC has constructed over the past couple months has drawn much acclaim, and Waston could be considered the anchor. He’s also relishing his role as a leader on a relatively young MLS expansion squad.

“When you have young guys, they want to learn,” Waston said. “It’s our responsibility as experienced guys to make a positive way. We have a very united squad. Things on the field are not going to be easy. We need to create a better family. There’s a lot of guys who continued from the USL. It’s a great group.”

Koch said there are no physical concerns for Waston despite him undergoing additional tests and beginning training a day later than most of his teammates.

“It happens every year that players have additional tests they might have to take,” Koch said. “It just means our medical staff are being very thorough. He was fit obviously and ready to train (Wednesday).”

With roughly five weeks remaining before the regular-season opener in Seattle, much of the discussion with the players this week at the Sheakley Athletic Center has focused on the pressure to gain continuity on the pitch and learn Koch’s system in such a tight window.

“I don’t think it is pressure because this is what we love,” he said. “I would change the word ‘pressure’ for ‘responsibility,’ because we want to create this club in a winning theme. We’re going to have big challenges, not just those three games but throughout the season. You can start good or bad, it doesn’t decide what will happen in the end. Hopefully, we can start with our right foot.”