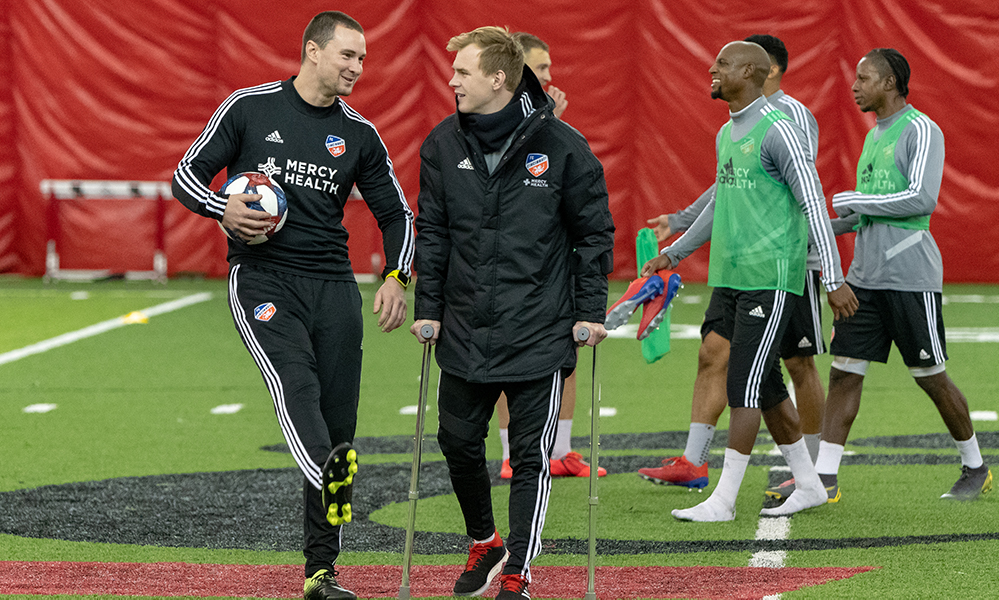 Though he sported crutches from an offseason training injury, FC Cincinnati fan favorite Jimmy McLaughlin also wore a smile Tuesday as the club began preseason training. McLaughlin will return home to Pennsylvania to recover and has received many well-wishes from fans

Just a few days ago, word came down from FC Cincinnati that fan favorite Jimmy McLaughlin suffered a serious knee injury during offseason training and would be missing significant time. Hearing the words knee injury and significant time together in a sentence is never a good thing. From his very first day with the Orange and Blue, McLaughlin has been revered by fans of this club. His relentless hard work and positive attitude have always been a staple. Now he will need those traits to overcome this latest setback.

McLaughlin has been in town since the start of preseason earlier this week but is expected to head back to Pennsylvania before the club leaves for preseason friendlies in Florida. McLaughlin has been seen at training, laughing it up with his new teammates, which can be crucial in helping a player mentally begin their rehabilitation.

Over the last few days and weeks, the club has brought in many new players, giving fans a whole new set of faces to get to know. For the casual fan, having a fan favorite like McLaughlin will help ease the transition into an almost entirely brand new squad. The loss of McLaughlin was taken pretty hard by fans.

Since the injury news became public, many messages were sent to McLaughlin over social media, asking if he needed anything or just words of encouragement. Messages from fans, teammates, former teammates and friends all flooded McLaughlin on Twitter.

Thank you @fccincinnati fans and friends for all the supportive messages. It means the world to me. Injuries are obviously never part of the plan but I will embrace the harsh reality and do whatever it takes every single day to recover and return stronger. I will be back

Sad to hear the news about @J_McLaughlinIII !! We are wishing you the speediest recovery!⚽️ forever cheering for #20 pic.twitter.com/QzQrNpLo8G

Jimmy, hoping for a speedy recovery. I know that if it were based on guts, heart, and desire, you'd be back in a heartbeat. Looking forward to your return to the pitch!

Sorry to hear Jimmy, you go on my morning prayer list until you return.

Wishing this stud a speedy recovery! Get well soon @J_McLaughlinIII 💪

Those were just a few of the many tweets that were sent his way. While it isn’t known how much McLaughlin would have seen the field this season for FC Cincinnati, one thing is certain, the injury dealt a serious blow to the hearts of all of his fans. The injury of a player like McLaughlin is tough, but that makes the return much sweeter. When McLaughlin is healthy enough to return to the field, Nippert Stadium will explode in a roar when he enters into a match.