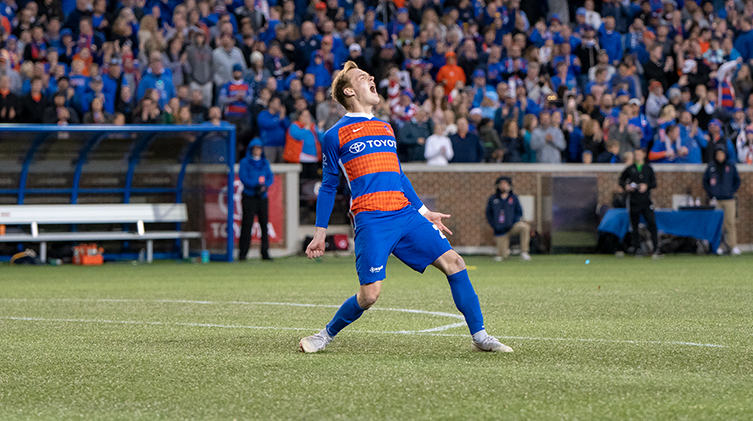 Adding franchise original Jimmy McLaughlin to its MLS squad would be beneficial in a few ways for FC Cincinnati — he’s a fan favorite who could be an impactful sub and comes at the right price.

Anxiety among FC Cincinnati fans is near an all-time high, as the wait for player news continues. Last week the club announced the signing of USL MVP Emmanuel Ledesma. With only a few players confirmed to be returning, the focus continues to be on which players will be brought back from the squad that dominated the USL regular season.

With a talented squad that was assembled prior to last season, the club brought back three players who have been there from the beginning. Corben Bone, Kenney Walker and Jimmy McLaughlin, known as the originals, have been with this club since its inception. With the transition to MLS in full force, the future of two of those originals has been determined.

The club already announced the signing of Bone to the team, while it is widely reported that Walker will be making the move up Interstate 74 to play for USL’s Indy Eleven this upcoming season. That brings the focus on the last original, McLaughlin.

Social media can be a dark place and that is the case in terms of any fan base when discussing player movement. The reaction to the possible signing of McLaughlin has brought some mixed reaction.

Seriously?? Wow. No way that team is going to compete in MLS if this is a trend…as much as fans seems to love the guy, McLaughlin would have been an easy release, for me. No offense to the guy, but that’s USL talent. 🤷🏻‍♀️

I love Jimmy…. but is he actually MLS caliber?

With the club hurrying to fill an MLS roster in just a few short months, the case is there to bring back another FCC original. Here are three reasons why McLaughlin should be on the MLS roster in 2019.

McLaughlin seems like he is much older than what he is. The key is that he is only 25 years old. A young player who has dabbled in MLS before could add a lot to the squad. McLaughlin will not take up a lot of money in terms of the player salaries. With his role expected to not be major, taking up a lot of cap space would be detrimental. In terms of the roster breakdown, McLaughlin appears to be locked into a supplemental roster spot (spots 21-24 on roster).

This discussion would be completely different if McLaughlin was much older. The fact that he won’t be turning 26 until a few months into the upcoming season and has a low price tag makes bringing him to MLS a low-risk, high-reward move.

The expectation to be an immediate contributor to the MLS squad is not there for McLaughlin. You know what you are going to get from McLaughlin when he’s on the field. You are going to get a high energy player who will use his speed to run at the defense and create chances. This season, you could see the game change when McLaughlin entered as a substitute. Don’t expect McLaughlin to log a ton of MLS minutes this season, but you can expect him to log some quality minutes in the U.S. Open Cup.

With McLaughlin looking to be a lower roster player, what he will bring to the training ground could be more valuable. McLaughlin is the type of player that will run through a brick wall for the good of the team. Like what McLaughlin did during the last few USL seasons, he will push his teammates to consistently bring their best.

During his time in Cincinnati, playing time has decreased for McLaughlin. Making an appearance in almost every regular season game, McLaughlin’s stats improved, despite the minutes drastically decreasing. Averaging 0.15 goals and 0.29 assists per 90 minutes, his play got better as the talent on the squad got better. Even though this year’s USL squad was incredibly talented, the MLS squad will have a lot more talent, and McLaughlin continued to increase his play, making an appearance in 32 USL games this season.

There is no debate that nobody gets a bigger reaction when entering the game than McLaughlin. When his name is announced, the crowd goes crazy. Keeping a player just because he’s a fan favorite is not the way to build a team. In this case, the benefit of bringing McLaughlin back is there. Bringing McLaughlin back, to be a part of the transition into MLS will be huge for this fan base. Kids and parents alike love McLaughlin, and bringing a player like that to the next level helps make the transition easier for that fan demographic.

McLaughlin’s energetic level of play is a major reason why this fanbase fell in love with him immediately. It is rare for an expansion club to have immediate success in their first season, so it is crucial to have players who bring energy and pace. McLaughlin won’t be the most talented player on this roster but you might be hard pressed to find a player that will put forth more effort than what he will when on the field.

FC Cincinnati holds a special place in the hearts of sports fans in the Queen City, and the move to MLS makes the stakes a little higher. It is crucial for the front office staff and coaches to get it right and assemble a solid squad to kick off their inaugural season in MLS. The expectation is there to bring in up to 10 players from the USL side. Regardless of who makes the cut, the level of play from these players will need to increase as they move forward into the preseason, regular season and hopefully the MLS playoffs. Bringing in a quality team player, who will work his butt off, could be just what this club and city needs during this transition from USL to MLS.