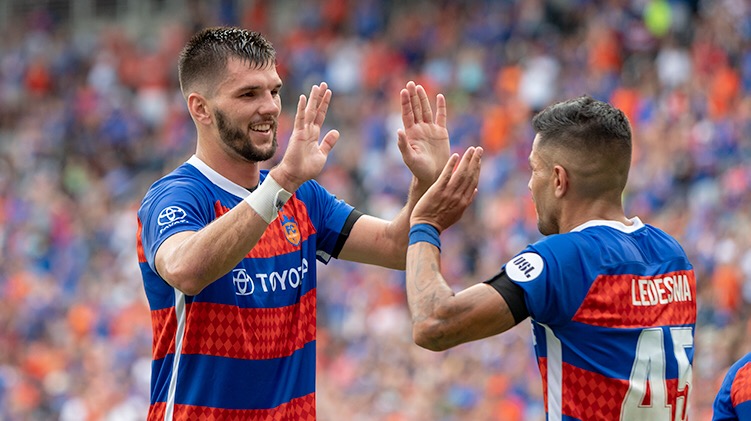 FC Cincinnati is helping fans get through the Monday blues with the signing of USL Defensive Player of the Year Forrest Lasso.

FC Cincinnati is helping fans get through the Monday blues with the signing of USL Defensive Player of the Year Forrest Lasso.

Occupying a domestic roster slot, Lasso is the 5th player, and first defender signed for FC Cincinnati’s inaugural MLS season. While details of the signing are not immediately known, it has been reported by The Athletic that Lasso will most likely be signing for near the MLS league minimum.

“Being able to play in MLS has been something I’ve been trying to achieve since I started playing soccer, so for me, it is very satisfying,” Lasso told FC Cincinnati. “There’s been a lot of hard work over the years, and I had faith in myself that I would eventually get the opportunity. I’m grateful to the FC Cincinnati organization for giving me this chance and I couldn’t be more excited to get ready for next year.”

In 2018, Lasso was a fortress on the backline, finishing third on the team in minutes played, while leading the league in clearances with 223 and aerials won with 172. The 6-foot-5 center back also won 74.3 percent of duels over the regular season, while recording 47 interceptions and 17 tackles, statistics that helped land Lasso on his second consecutive USL All-League First-Team.

“Forrest was a massive part of our team this past year and we feel he’s earned a spot to play at the MLS level next season,” FC Cincinnati Head Coach Alan Koch said. “While his potential has always been evident, Forrest’s dedication to improvement each and every week played a key part in his fantastic season. We look forward to Forrest’s continued growth and are eager to see him embrace the challenge of playing in MLS next year.”

Lasso originally signed with FC Cincinnati in 2018. Prior to joining FCC, Lasso played for the Charleston Battery from 2015-2017 after playing his collegiate soccer at Wofford College from 2011-2014.