FC Cincinnati will host the Charleston Battery at Nippert Stadium this Saturday. Check out our 5 Things to Know for the match between the first place FCC and third place Battery. 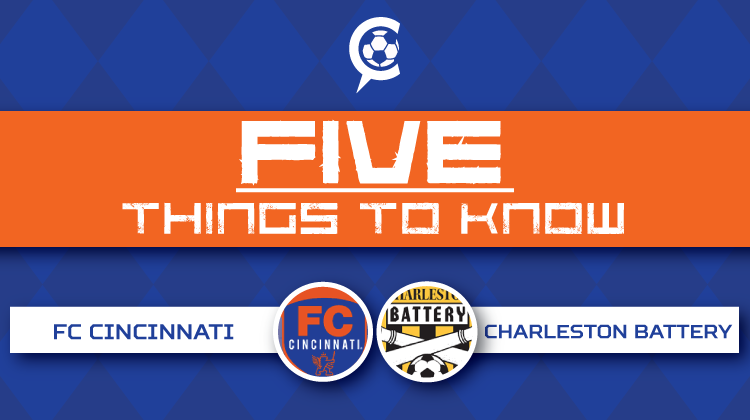 I Will Survive – Unbeaten Streaks: FC Cincinnati enters Saturday’s match unbeaten in its last 12 league matches while Charleston hasn’t lost in its last 11 USL contests. These clubs have shown how difficult they are to beat with both in the top five in clean sheets (CHS – 14, CIN – 10). FCC defeated the Battery for the first time in club history back in week one and will hope to notch its first home win over the oldest continuously operating professional soccer club in the United States to continue their run. FCC is conceding on average one goal per match while Charleston offers up 0.79. Will one of these clubs end the others unbeaten streak, or are we looking at a low scoring affair?

Respect – The Old/New Guard: While Coach Mike Anhaeuser has been the mark of consistency in Charleston, the 2018 roster is relatively new with the club having to replace a large group of impactful players. Ataulla Guerra has filled in for the departed Romario Williams and has led the team in scoring with 12 goals. While no one player has replaced the chance creation of Maikel Chang and Justin Portillo, Jarad van Schaik and Atlanta United loanee Gordon Wild have helped pace the CHS attack to 32 goals this season. New keeper Joe Kuzminsky is second in the league in clean sheets and has an 81 percent saves rate. Anhaeuser will need his squad to play at peak levels if it hopes to award its gaffer with his 200th career win and continue its surprise run up the table.

A Change Is Gonna Come – The New Orange & Blue: It has been nearly three weeks since Fanendo Adi, Fatai Alashe and Pa Konate have been added to the FCC roster. All three are now available for selection, but will we see them in the XI this weekend? In a WCPO story with Laurel Pfahler, Adi was portrayed as still working towards his match fitness. The Nigerian has featured twice for FCC but both in sub roles. If we take this report as a projection on this weekend, it seems likely the DP will come off the bench. Konate’s work visa issues were resolved this past week, but is he ready to fit in? Both Alashe and Konate still must learn the intricacies of FCC coach Alan Koch’s tactical plans, but with three games in eight days, I’d bet on each making their debut soon.

A Brand New Me – Formation Changes: FCC and Charleston are completely different teams since they played one another back in March. Tactically both have departed from their earlier season formations with FCC going to the 4-4-2 Diamond and more recently to a 4-3-3. The Battery have morphed into a 3-4-3 with midfielder Neveal Hackshaw dropping back into a third center/left back role. This setup has seen the Battery lose the possession battle, but their counter-attack game has been lethal. These moves by Anhaeuser have led to five straight shutouts and a march toward the top by the Battery. One of the big questions is how will FCC approach this match tactically? Will Koch elect to move back to the 4-4-2 diamond with Danni König and Emmanuel Ledesma up top and Nazmi Albadawi in his CAM role or the 4-3-3 that sees Albadawi in the box-to-box role and Ledesma wide. Both have their strengths with the 4-4-2 allowing more goals but also an improved attack and the 4-3-3 still struggling to get many fruitful chances but has been solid defensively.

Dr. Feelgood – I Want A Statement: Let’s face it, I will be happy with three points in whatever way they come, but I really want a statement victory. FCC has shown they can beat the mid-pack teams in the USL, but we have yet to see them knock off a current top five squad since Indy was in that spot earlier in the campaign. This might be selfish on my part, but I want to see FCC dominate (I hate this term) a match from start to finish over a good team. I want some confidence after some nail-biting matches vs. Nashville and last week vs. Penn FC. Hopefully the Orange & Blue can reward their fans with a huge victory after this long homestand.

Join host Bryan Weigel @bryanweigel, as he welcomes guest Drew Bartow (@drewontarget) the Soccer N’ Sweet Tea (@SoccerNSweetTea) to preview Saturday’s match vs. the Charleston Battery. This show will hopefully fit in your drive time to work, to the pub on game day or lead you right up to game time. We hope you enjoy!

TV: This contest is set for a 7:30 p.m. EST kickoff on Saturday night. The broadcast duo of Tom Gelehrter and Kevin McCloskey will provide the play-by-play and color analysis to FCC fans live on Star 64.  The match will also be broadcast at FC Cincinnati’s pub partners or by Streaming internet on ESPN+.