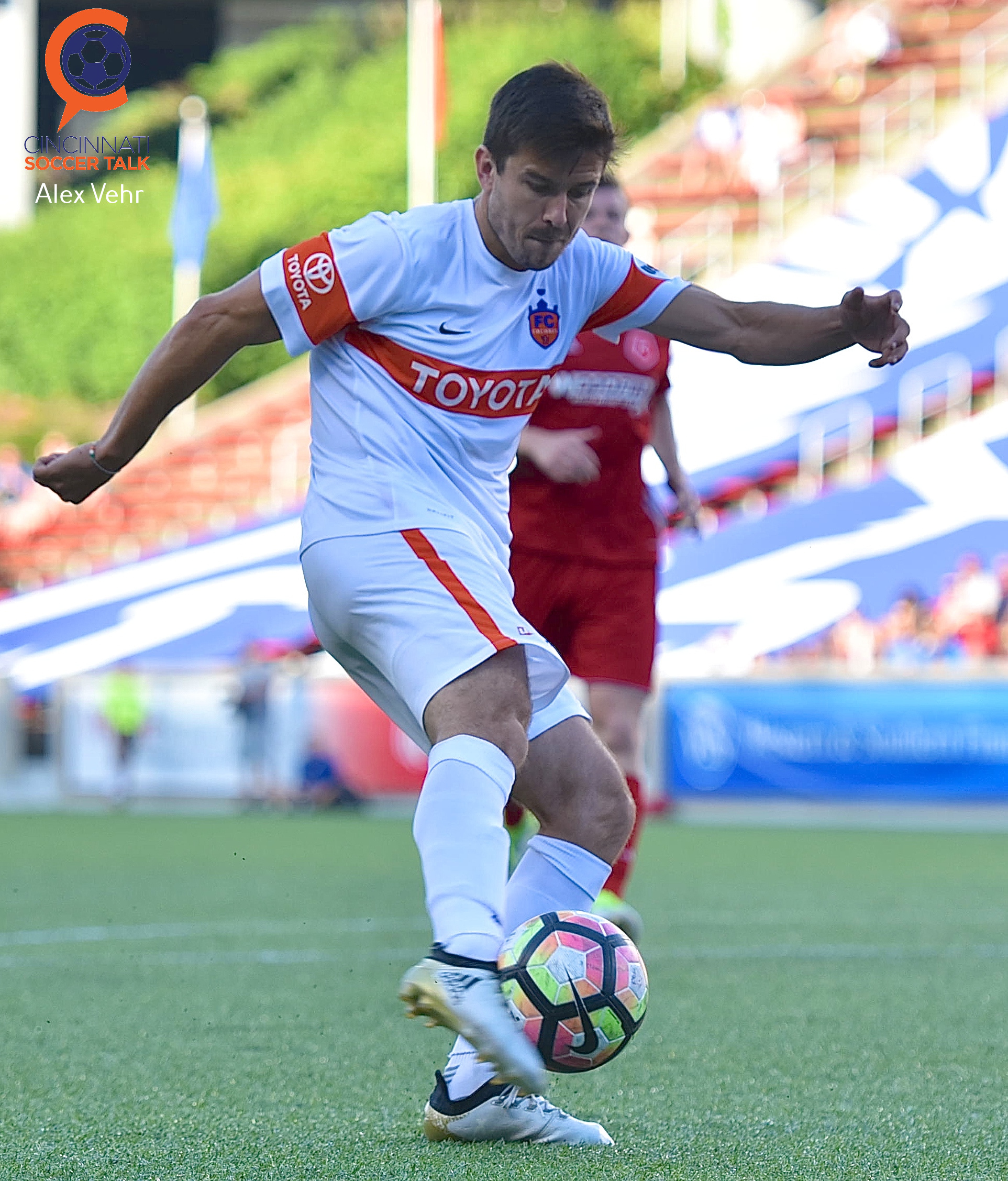 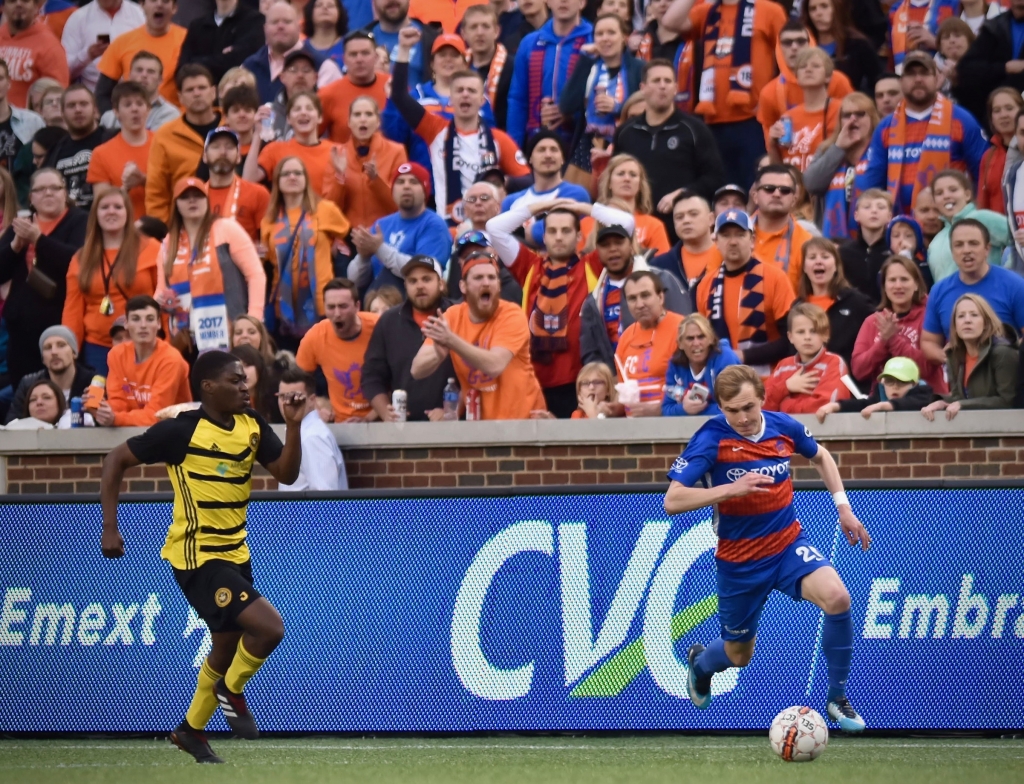 US Open Cup: Round 3 – FC Cincinnati at Pittsburgh Riverhounds SC

FC Cincinnati rolled out a slightly different looking starting XI in its 2018 Lamar Hunt U.S. Open Cup third round match. The Orange & Blue lined up in a 4-5-1 formation in the Steel City that saw FCC original Jimmy McLaughlin as a central attacking mid instead of his normal left wing role. Sem De Wit and Russell Cicerone each received their first starts in 2018 in what was a physical and back-and-forth affair.

The high-powered Cincinnati offense got going early into the match with an opportunity in the third minute. Daniel Haber received the ball on the left and got in behind the Pittsburgh defense. His cross found the foot of forward Emery Welshman, whose volley sailed just over the frame. The Hounds looked a bit disjointed early on with their only chances in the first 20 minutes coming off turnovers from the Cincinnati midfield.

Cicerone created a great chance in the 22nd minute finding space up the right side of the pitch. The youngster turned his defender, but his cross was just lacking and missed the oncoming Haber. Pittsburgh’s best opportunity in the half came moments later, as its leading scorer, Neco Brett, found space up the Cincinnati flank. Brett took the ball to the left end line and crossed it to the top of the 18-yard box to an awaiting Kenardo Forbes. The former Rochester Rhino hesitated for a moment before unleashing the shot that was deflected wide.

Cincinnati finally got on the board from Pennsylvania native McLaughlin. Midfielder Michael Lahoud intercepted the ball near the midfield line. Lahoud dribbled about 20 yards before passing to Welshman at the top of the 18-yard box. The forward one-touched a through ball to McLaughlin who unleashed a shot past Hounds keeper Dan Lynd.

Neither team created many chances at the end of the half, which saw Cincinnati up 1-0.

Pittsburgh came out of the locker room wanting to equalize as soon as possible. The Hounds pressed the attack in the 49th and won a corner. After repelling that challenge, Hounds attacker Franke unleashed a dangerous shot left of the box and was headed clear by De Wit. The Hounds nearly equalized in the 58th when a Francois shot took a deflection off De Wit and the rebound was put over by Brett.

Just as things began to look dire for FC Cincinnati, the Orange & Blue won a free-kick about 30 yards out in the Pitt half. Lance Laing took the 61st-minute free-kick over the wall and skipped it past Lynd to put the visitors on top 2-0.

Seconds later the Lionhearted notched their third off a Haber putback. Cicerone was played into space down the right wing and crossed it back to Welshman. Welshman’s strike ricocheted to Haber, who finished it cooly.

Pittsburgh would go on to try and execute crosses into the FC Cincinnati box for the remainder but couldn’t find a result until an 88th minute rebound from Dennis Chin. The initial shot from sub Romeo Parkes skimmed off Spencer Richey’s gloves and into the path of Chin.

Too little, too late for the hosts, and Cincinnati pulled off a statement win in the Steel City. FC Cincinnati will learn its fourth round pairing on Thursday when U.S. Soccer will release the updated regional pairings for later rounds.

TUNE IN TO CINCINNATI SOCCER TALK FOR MORE UPDATES.

Quality of Depth – Many FCC fans were questioning Alan Koch’s squad going into the match. The reality is that even though Cicerone, De Wit and others haven’t started many USL matches yet, it doesn’t mean they lack quality. This crew showed they could hang with one of the best USL sides on the road and come back with a result. They have a track record of success, and this experience could pay dividends should a key player injure themselves later this season. Credit to Koch for identifying the squad and owner Carl Linder III for providing the resources to put a quality roster out there to compete with so much schedule congestion.

This Attack – McLaughlin’s first half goal was the first conceded at home for Pitt in 2018 and only their seventh in 11 matches. The two later goals by Laing and Haber were icing on the cake. FCC has converted 20 percent of their chances in league play and was a tick better on Wednesday with three goals in 10 chances. The 10 chances were a bit deceiving, as Koch locked the defense down over the last 30 minutes to see FCC advance for a second consecutive year to the fourth round of the U.S. Open Cup.

Bend Not Break – The Riverhounds generated 18 shots on the evening with most coming from outside the Cincy 18-yard box. Cincinnati’s defense led by De Wit and Forrest Lasso was organized for the majority of the evening and played the Hounds into tough situations. The defensive cover by Lahoud and Will Seymore helped mark Neco Brett out of the match as he was forced to take risks and was called offside many a time. Laing and Matt Bahner forced Pittsburgh into deep and mostly harmless crosses all evening in what was one of the better defensive performances of 2018.