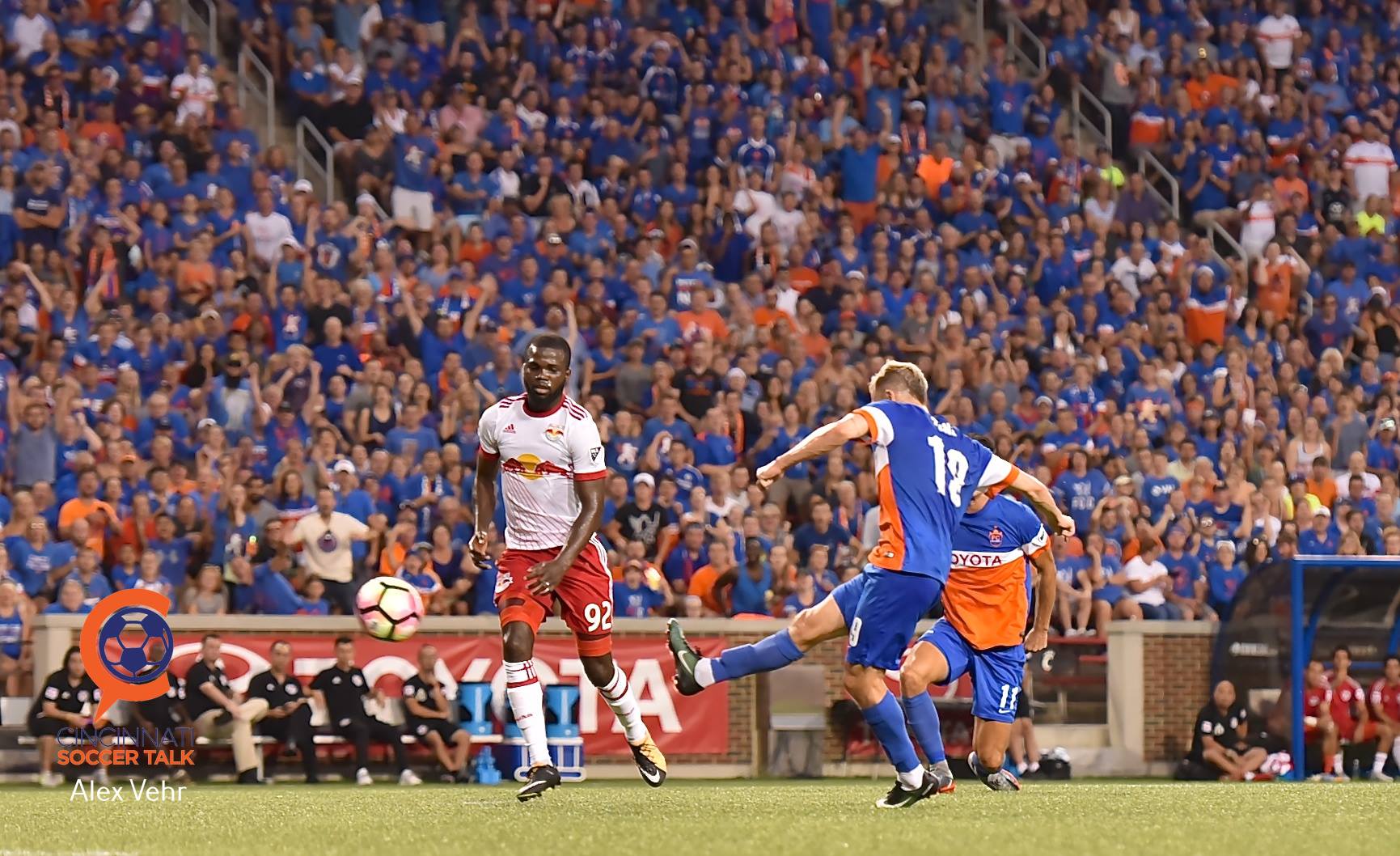 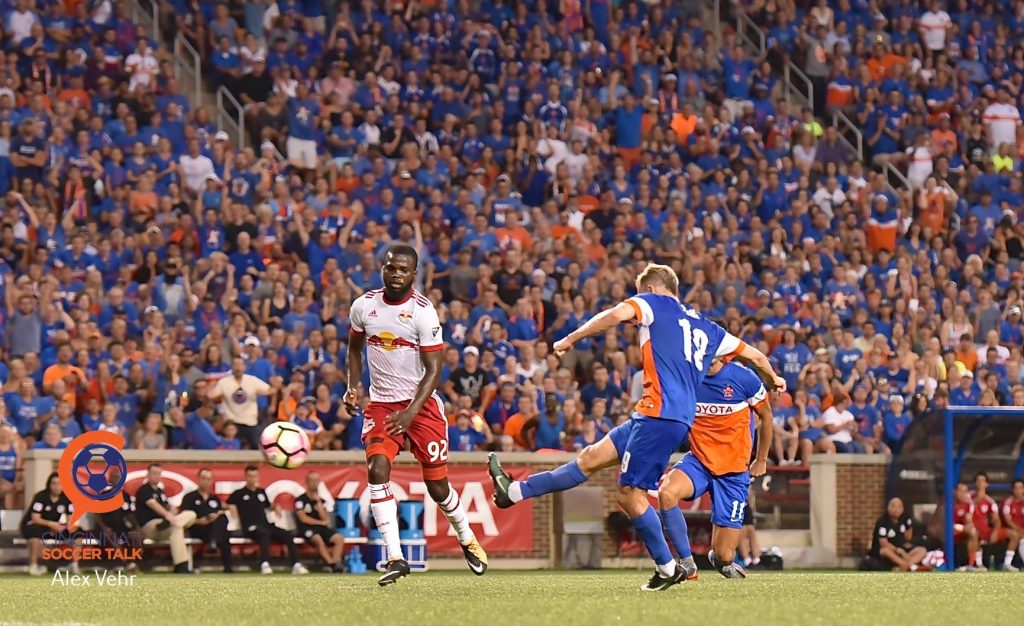 Corben Bone connects to put FCC up 1-0 over New York in the semifinals of the Open Cup.

On Wednesday, US Soccer unveiled the 2nd round pairings for the 2018 Lamar Hunt U.S. Open Cup, U.S. Soccer’s National Championship. FC Cincinnati, looking to replicate their outstanding semi-final run from last season will face the winner of the first round pairing between the Michigan Bucks (USL PDL) and the famed NPSL club Detroit City FC. The match will be held on Wednesday, May 16th at the University of Cincinnati’s Gettler Stadium.

The Orange & Blue will be one of the 97 teams taking part of the 105th version of the tournament with USL clubs entering in the 2nd Round and Major League Soccer (MLS) franchises entering in the 4th Round.

This year’s winning team will receive $300,000 (up from $250,000 last year), a berth in the 2019 Concacaf Champions League and have its name engraved on the historic Dewar Challenge Trophy, one of the oldest nationally contested trophies in American team sports. The runner-up will earn $100,000 (up from $60,000 last year), while the team that advances the furthest from each lower division will take home a $25,000 cash prize (up from $15,000 last year). FC Cincy took home the 2017 D2 bonus after defeating Miami FC in the 2017 quarterfinals.

After facing regional teams Indy Eleven NPSL and AFC Cleveland in the 2nd round over the past two seasons, this year’s tie while not local, offers some interesting storylines. Detroit City FC, more so their supporters, have been vocal in their criticism of FC Cincinnati. As FC Cincinnati launched in 2015, DCFC supporters lobbed criticisms and with Louisville, labeled the club as “plastic”. Le Rouge is one of the most well supported and rambunctious lower division clubs in the United States and has regularly drawn crowds of over 7,000 fans to Keyworth Stadium. Both supporters of FCC & DCFC could favor this matchup as there would be an expectation of a large traveling contingent from Michigan.

DCFC finished in 2nd place (9W-2L-3D) in the Great Lakes Conference of the NPSL. During the 2017 playoffs, they defeated conference champion Ann Arbor to advance to the NPSL National Semifinals. Le Rouge then fell in penalties to eventual National runner-up Midland-Odessa FC. Detroit City FC returns at least seven players from 2017 including Cyrus Saydee, who was named the 2017 NPSL Player of the Year. Saydee has been with City since its first season in 2012. 2017 Captain Dave Edwardson, Jeff Adkins are both returning for their sixth seasons along with Omar Sinclair, Seb Harris, Nate Steinwascher, leading goalscorer, Shawn Lawson.

While not as well known as Detroit City, the Michigan Bucks are entering their 22nd season of existence and are one of the most successful USL PDL clubs in league history. The three-time USL PSL champions count two current FC Cincinnati players as alumni. Defender Matt Bahner played for the Bucks in 2012 while newcomer Russell Cicerone spent 2015 & 2016 with the Bucks and led them to a USL PDL title in his final season.

The Bucks will form their squad in late April due to the majority of players spending their Spring in college. Assistant coach Paul Thomas has been elevated to head coach for 2018 replacing two-time USL PDL champion head coach Demir Muftari. Michigan knocked off Indy Eleven in the  2nd round of the 2017 US Open Cup before losing to Saint Louis FC in the 3rd Round. They won (10W-1L-3D) the Great Lakes Division of the USL PDL Central Conference in 2017, but fell in their first playoff match to the Des Moines Menace. While their roster is not formed yet, they will be a difficult out based on their track record.

While both of these teams are not local, they are high profile amateur clubs and will test what is expected to be a reserve FCC side in Gettler. Supporters will have to buy tickets to this match as US Open Cup tickets are no longer included in season ticket membership packages. Gettler Stadium seats approx. 1400 fans, but according to social media, the club will be addint temporary seating for the match. Plan ahead as this will be an exciting event regardless of whether the Bucks or Le Rouge advance into the 2nd round.

FC Cincinnati was paired with the winner of the Des Moines Menace and AFC Cleveland in the 2017 cup with the Ohio club advancing to face the Orange & Blue. A last-second Djiby Fall goal saw FC Cincinnati through to the 3rd Round where he again would notch the winning goal vs. rival Louisville City.

In the 4th Round, FC Cincinnati and Columbus Crew SC paired up to play the inaugural Hell is Real Derby. The Senegalese striker would once again tally to defeat Crew SC in front of 30,160 fans at Nippert Stadium.  The heroics of former goalkeeper Mitch Hildebrandt in penalties along with strikes by Josu, Harrison Delbridge, and Jimmy McLaughlin saw the USL club defeat Bastian Schweinsteiger and the Chicago Fire in the 5th Round.

FC Cincinnati finally had to return to the road as they were matched against NASL Spring Champion Miami FC in the quarterfinals. After the first attempt to play the match was canceled by inclement weather, the two lower division squads finally dueled on August 2nd. The Orange & Blue came out victorious after yet another goal from Djiby Fall sending them back home to Nippert Stadium to face the New York Red Bulls.

The two clubs faced one another in front of a USOC record 33,250 fans to see a non-final. Nippert was packed with the Orange & Blue faithful in what would be a thrilling match. FC Cincinnati stormed out to a 2-0 lead with goals from Corben Bone and Austin Berry before conceding two late goals and an extra time winner from MLS MVP Bradley Wright-Phillips.

This run was featured on many national platforms including a dedicated ESPN SportsCenter segment, GolTV and in a video from FIFA. The 5th Round match was shown live on ESPN garnering high ratings and attracting a global audience to the club. The US Open Cup is a magical event and we hope that FC Cincinnati will continue to prioritize these fixtures in the future.