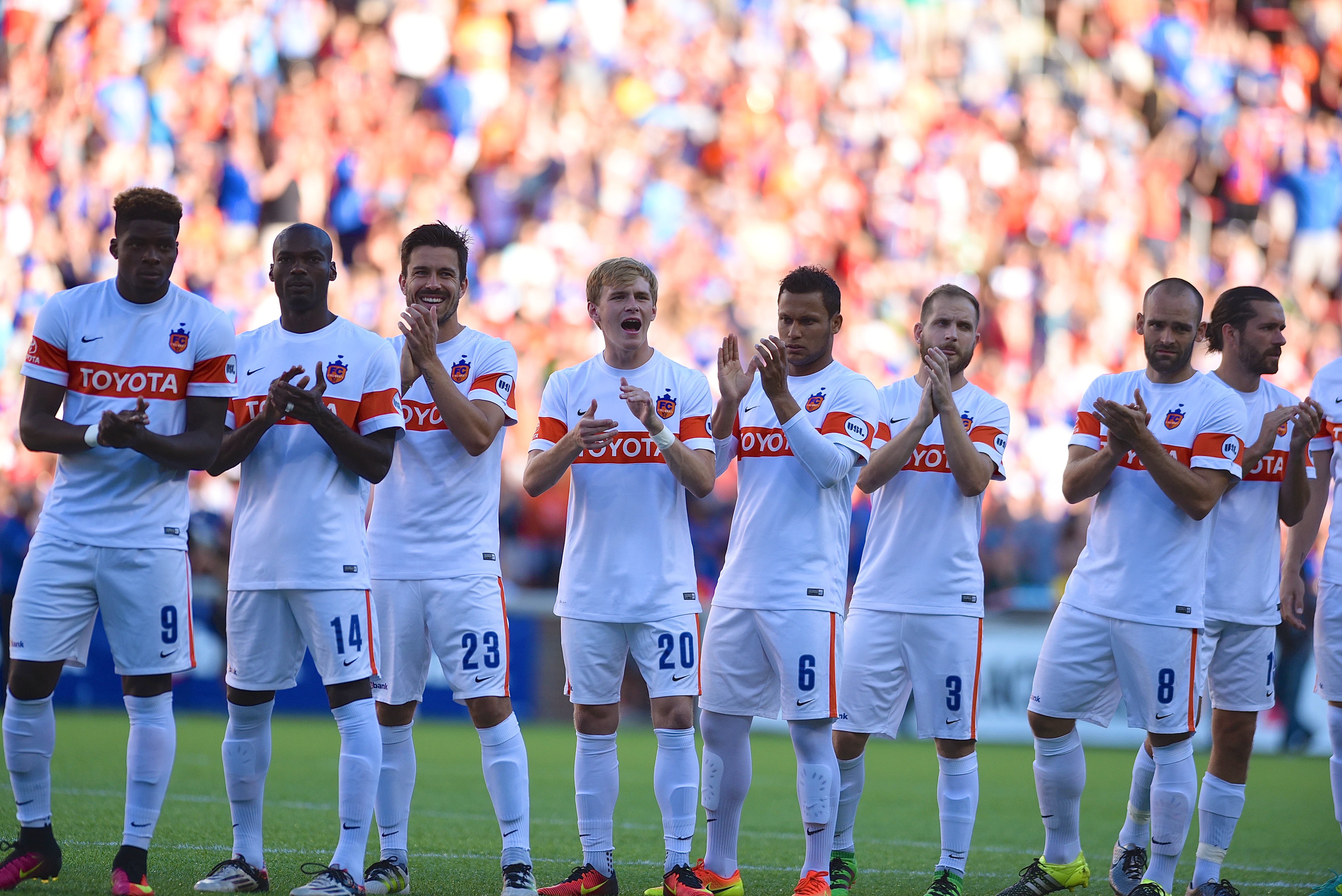 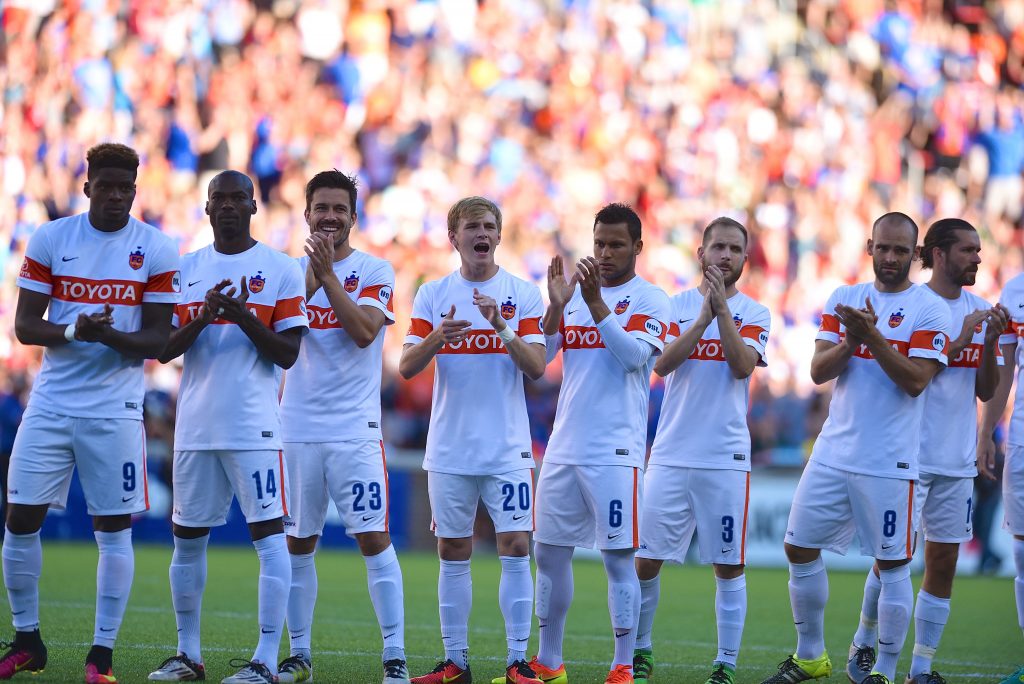 As FC Cincinnati enters their third season after a large roster overhaul, we wanted to find out where some of our former Orange & Blue players have moved onto. Check out the updates of the former FCC players and how they may be doing at their current clubs.

Harrison Delbridge – Melbourne City (A-League): Delbridge has played in eight Hyundai A-League matches (5 starts) since his move to Australia. The center back has completed 81% of his passes and has won 75% of tackles attempted. Times have not been easy for one of our favorites. Harrison was red carded in his second start with his new club and he has struggled to be in the starting XI as of late. After starting 5 of his first 6 matches, Delbridge has made sub appearances in the two previous fixture prior to being an unused sub this weekend. City sit in fourth place on the table after losing three of their previous five matches. One would have to think Delbridge will play his way back into the lineup with his club on poor form.

Mitch Hildebrandt – Atlanta United (MLS): The 2016 & 2017 leading shot-stopper for FC Cincinnati will be on the shelf for the next 10 weeks. Doug Roberson of the Atlanta Courier-Journal reported that Hildebrandt injured his knee two weeks ago. It’s likely that Hildebrandt would have seen most of his time with ATL UTD 2 as the starting keeper while being considered a de facto “third” keeper for the first team. Best of luck in his recovery and we hope to see him when the clubs duel for their second time on Wednesday, August 22nd.

Derek Luke – Rio Grande Valley FC Toros (USL): After losing most of the 2017 season to injury Luke has fully recovered and started in the first match for RGVFC. He was not too busy in the 1-1 draw, notching one clearance for the Houston Dynamo reserve side.

Antoine Hoppenot – Reno 1868 FC (USL): The little-used sub for FCC in 2016 has taken the league by storm. After compiling 12 goals and 8 assists in 2017, the forward assisted on a goal to Brian Brown. Reno were defeated in the dying moments vs. Swope Park Rangers over the weekend, but Hoppenot still looks to be one of the best-attacking players in the USL.

Pat McMahon – Louisville City FC (USL): McManBun drew the ire of FC Cincy fans by moving to Louisville this offseason. McMahon played 90 minutes in a 2-0 victory over newcomers Nashville SC in their first match over the weekend. Coach O’Connor utilized McMahon in a 3-man back line with the former Rhino playing closer to the right touchline.

Luke Spencer – Louisville City FC (USL): The forward scored the first goal off a header vs. Nashville over the weekend. Spencer continues to prove the doubters wrong in 2018. It seems that he fits the perfect build of an LCFC striker with their many crosses into the box. We like seeing good people succeed and wish Luke luck besides in the matches where he plays FCC.

Kadeem Dacres – Saint Louis FC (USL): Kadeem moved to former MLS expansion candidate STLFC over the offseason. He came off the bench in the 83rd minute for his new club in a 1-1 draw vs. RGVFC. I’d expect Kadeem to be an impact sub for STLFC due to the talent ahead of him and the formation employed by coach Pulis.

Kyle Greig – Saint Louis FC (USL): Greig’s contract was not renewed by Vancouver (MLS) in the offseason and also moved to STLFC. He came off the bench in the 58th minute for STLFC in a striker role. I don’t expect him to supplant Corey Hertzog yet, but look out as the season progresses.

Aodhan Quinn – Orange County SC (USL): Quinn moved to the West coast and joined Orange County SC for 2018. He featured as a deep-lying playmaker in a 1-1 draw vs. Phoenix Rising. It looks as if Quinn will be the main corner kick taker for his side and will be dictating play for the California side. His 62 passes were tops on the team in a good showing to start 2018.

Dallas Jaye – Phoenix Rising (USL): Jaye did not dress for the draw to Quinn’s OCSC. He was however named to the Guam National Team camp that runs Monday, March 19th through to Tuesday, March 27th. Guam will play friendly matches against San Diego State University and L.A. Galaxy II on Mar. 23 and Mar. 27, respectively.

Francisco Narbon – Seattle Sounders 2 (USL): Narbon signed with S2 for the 2017 season and was brought back for 2018, for now. He did not feature in the club’s 2-1 win over Portland Timbers 2 on the weekend possibly due to him spending the offseason training in Europe. A rumor emerged that Narbon was getting a look from two Italian clubs, a Swiss club, and Dinamo Zagreb. Could a move be in the cards for the Panamanian?

Victor Mansaray – Charleston Battery (USL): The former US Youth International had a tumultous 2017 bouncing from Seattle to Cincinnati, back to Seattle and then to Finland. Mansaray signed with the Charleston Battery in the offseason and registered a solid Carolina Challenge Cup for the Holy City. He made his debut in a sub role over the weekend in their loss to FCC.

Sean Okoli – Kuopion Palloseura (Veikkausliiga): Okoli is on loan with the team more commonly know as KuPS. He is with the Finnish side in their preparation for their season that begins in April. CST will update you on the former USL MVP’s status once his future becomes more certain.

Tyler Polak – Miami FC B (NPSL): Polak joined NPSL side Miami FC B for 2018. The former NASL side is actually a pretty strong group with Don Smart, Vincenzo Rennella, Michael Lahoud, Coy Craft, Polak among others playing in the traditionally amateur league. The left-back started the clubs first exhibition match of 2018 and saw his first-half group put up 2 goals vs. Weston FC. After an up and down season with Polak being one of the highlights vs. Crew SC, we are happy to see him land on his feet.

Paul Nicholson – Cincinnati Dutch Lions (USL-PDL): After a career that saw the defender/midfielder play over 150 professional matches, Nicholson decided to hang up his boots and mover into a career in management. The Englishman’s first challenge will be with the regions USL-PDL club, Cincinnati Dutch Lions FC. CDLFC is comprised mostly of college players during their summer break, players looking to latch onto a professional club late in the season, or internationals looking to make a name for themselves in the US. Nicholson will look to get the Dutch Lions back into the USL-PDL playoffs in 2018. CST will be on hand to cover many matches this season.