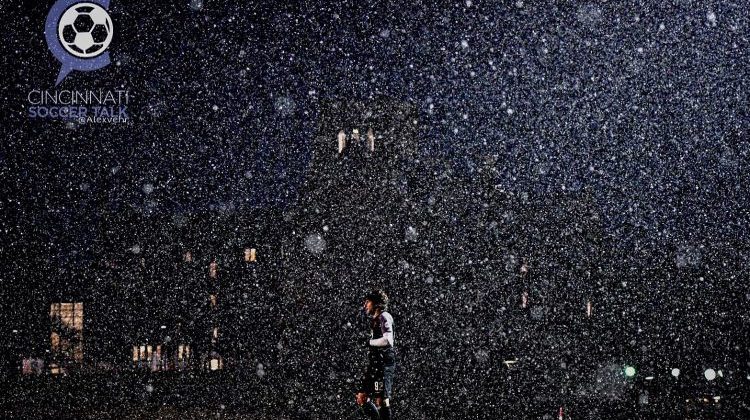 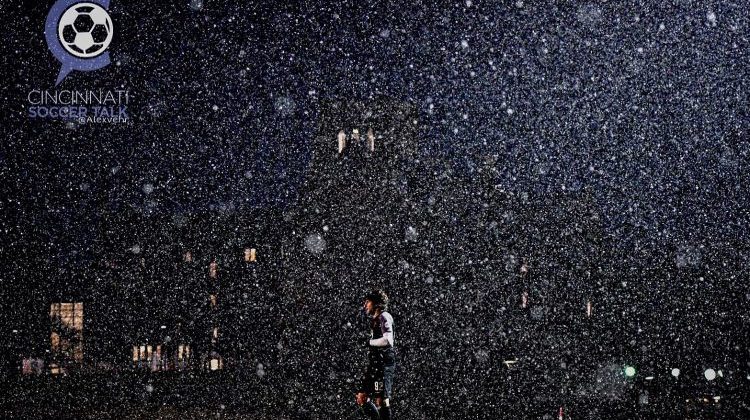 It was a cold and sometimes snowy evening as FC Cincinnati became the visitors at Gettler Stadium. The facility is used by the Orange and Blue for practices and outside drills. Fans were not driven away by the weather as the stadium started to fill toward game time. Not just FC Cincinnati fans were present, UC had a section of students and fans show up to cheer on the underdogs.

The match started similar to the one at NKU. FC Cincinnati controlling possession with the Bearcats playing in a defensive shell. UC was not afraid to go after FCC, pressing any player that got the ball. The swarming defense forced FC Cincy to pass often and look for the opening. That opening often showed up on the ends of the field. Holding down the defensive center of the pitch seemed to be the Bearcats strategy and it worked well to start the match. Daniel Haber was quick to make runs in but often the ball ended up as a cross in.

UC held down both boxes well and stuffed them with quick defenders. In the 22nd minute, Albadawi finally got a clear look from the center but the ball sailed just right of the net. Most of the shots in the first half came from Haber and Cicerone. Both were frequent recipients and creators of balls in from the wings. Finally, in the 42nd minute, Cicerone was able to head a forward ball from Haber in for a goal. Fans felt it was coming after seeing all the cleared chances beforehand.

As Coach Koch was away working on his USSF Class A license, Assistant coach Yoann Damet subbed in Kenney Walker and Jimmy McLaughlin at the half for Albadawi and Seymore. The change brought a speed boost with both Haber and McLaughlin playing on the wings. In the 56th minute, UC tried to shoot around Paddy Barett who forced the shot wide right. FC Cincinnati spent most of the second half in the attacking third working to dissect the thick UC defense.

Several close calls came and went in the 2nd half. Haber dropped a cross in front of Tomi Ameobi but it went untouched and then out. A couple long shots were attempted by Ledesma. The closest of all, Welshman broke away around the 87th minute and had a one on one chance with the keeper. As the keeper came out, Emery danced around him and ran out of room. The shot never was taken and went out of bounds.

We walked away impressed by the chances created and shots taken. Finishing is what needed improvement tonight for FC Cincinnati. UC did a phenomenal job sticking to their game plan and holding off the pros. Every Bearcat on the pitch tonight should hold their head up high. The goal by Russell Cicerone makes him the tenth recipient of a preseason score. It gets harder and harder to figure out the starting XI with this FC Cincinnati squad.

Work Out the Kinks – Cincy looked a bit disconnected at times tonight. The Orange and Blue would take away a pass and then guess the wrong direction a teammate would make cutting in. Many chances were created without these moments, but another goal could have been had if some of the clever moves had worked. FCC has clicked well in previous matches so we were caught off-guard with the several misses tonight.

Haber Continues to Impress – Daniel Haber is quick and refuses to wait for chances to come to him. If he sees no play, he tries to create a shot for himself. It is surprising a second goal did not come from Haber in the first half. He also looks to get the ball forward at all times. Nothing is a more clear example of that than his forward assist to Cicerone.

Keep the Opposition Guessing – The defensive strategy tonight nearly eliminated Albadawi and anyone else in a central attacking role. USL teams will not be able to stick extra bodies on everyone. FC Cincinnati needs to keep goals coming from anywhere opponents are weak. Alan Koch will have his hands full changing up the game plan and countering defensive efforts. It is very likely many teams will park the bus against Cincinnati in 2018.