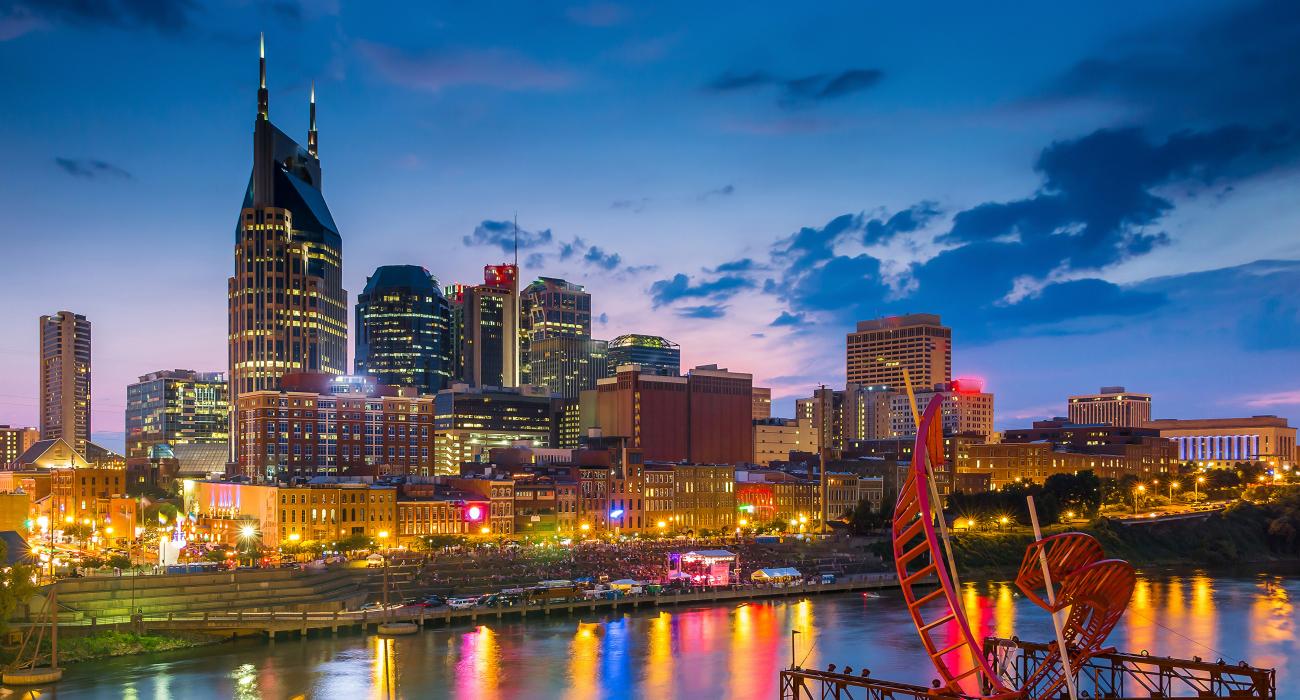 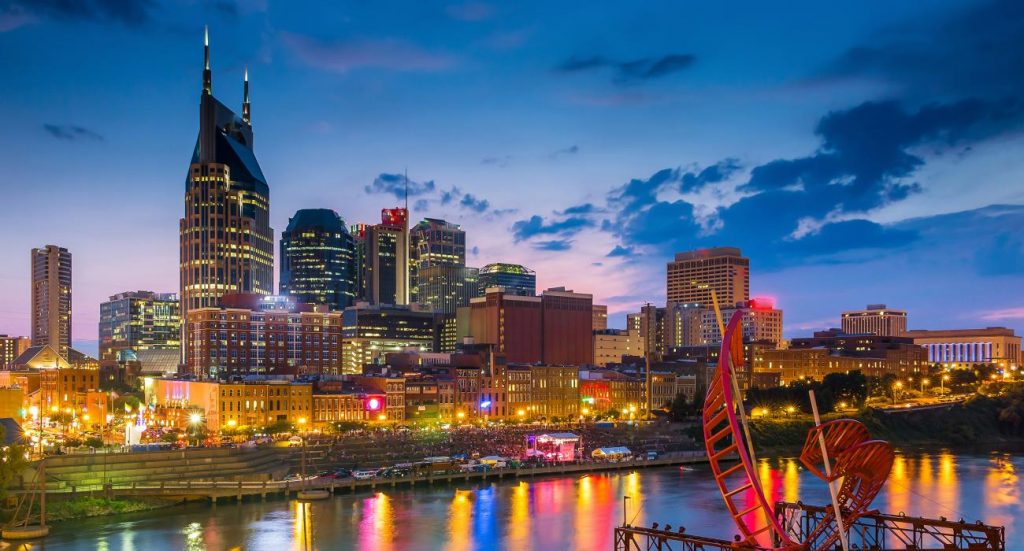 With a little over a month away before FC Cincinnati kick off their regular season, I thought I would encourage FCC faithful to entertain a road trop to several away destinations. These recommendations are far from the ordinary ones you will see on trip advisor or Fodor’s. Please comment with your thought’s below on where you plan on traveling to watch an FC Cincinnati away match. 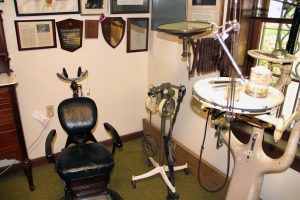 Macaulay Museum of Dental History – Hidden away on the grounds of the Waring Historical Library sits an odd little museum dedicated to one of society’s most common fears: the dentist. The Macaulay Museum of Dental History is a small, well-curated collection of vintage dental equipment and teeth-based treasures, like an instrument made by Paul Revere himself. You can even see a recreation of an early 1900s dental office, which won’t make you feel so bad about visiting the modern kind. – Roadtrippers.com – Guys, I mean, c’mon! We need to make as many tweets as possible about this & send them to our friends down in Louisville. I’m sure they could benefit from a little dental hygiene awareness.

Poe’s Tavern – Nothing says, “let’s get hyped up before an FC Cincinnati” match than visiting a restaurant themed around the macabre author. Honestly, though, this beach-side restaurant is wall-to-ceiling Poe, and just about everything on the menu is named after one of his famous tales, from the Annabel Lee Burger to the Tell-Tale Heart Burger. YIKES!

Charleston’s Rotating Cow – OMG, REALLY?!?! A bovine statue that’s the mascot of Coburg Dairy, and rotates next to a large carton of chocolate milk. This is too good to miss. LINK 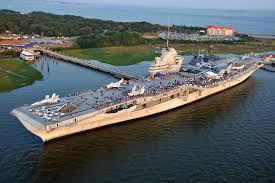 USS Yorktown – Because, who doesn’t want to go on an aircraft carrier once in their life? I’ve actually been on the ship that starred in the hit movie Tora! Tora! Tora! several times. If you have kids, make sure they check out the awesome Apollo space capsule on board, but I definitely suggest you don’t go kicking any soccer balls off the deck. Do that and you might not have a good time. In all seriousness though, if you have time to visit CV-10, I’d suggest you do so.

Probably Won’s Visit this Next Time in Charleston: Grayson’s Tree of Knowledge – It’s a tree with no limbs set in a concrete slab. Smart people here in the Palmetto State.

Rubber Horse Sculpture – Have you ever woke up and thought, “Man, I really need to see a horse made from recycled tires”? Well, now’s your chance. Just go to the corner of Prospect & New Jersey and see for yourself. That or you can check out the Museum of Miniature Houses. My family may just want to sit in the hotel. 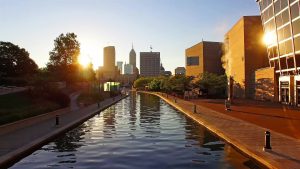 Indianapolis Canal – When they say canal, they mean a concrete creation that runs along several museums restaurants and bars. Most famous for the time when former Colts Kicker Pat McAfee got drunk and went for a swim, this location is also known to be the spot where Mrs. Weigel said, “Yes” (shocked me too). Fun for kids and adults on a nice warm day in March.

Lucas Oil Stadium – Home of the Indianapolis Colts. Check out the statue of Colt legend Payton Manning outside the brick behemoth. Apparently, Indy Eleven will call the venue “home” for 2018, but fans will only be able to sit on one sideline in the venue. This probably shouldn’t be on this list since you better be coming here anyway. Just want to remind the XI faithful, that like FCC fans, you are most definitely guests in the building. 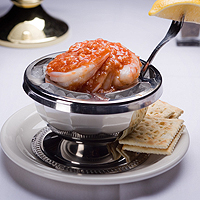 St. Elmo’s – The steakhouse has been located in Indianapolis since 1902. While they do offer up great steaks, they are known for their Shrimp Cocktail. You get 4 jumbo shrimp served with our spicy, signature cocktail sauce ALL FOR $16!!! I’m pretty sure that if I’m going to order seafood, 1. it better be fresh, 2. not served with a tomatoey sauce, 3. NOT $16 for 4 friggin shrimp. Yikes! In all honesty, the food is pretty legit, but I’d recommend going next door to their more casual joint, Harry & Izzy’s.

Might Try & Squeeze This in While in Indy: – Indy Children’s Museum – This is the largest children’s museum in the world! If you have little ones and want to give them a reward for allowing you to scream your head off for 90 minutes, this is it. Check it out.

Tampa – Don’t be confused, the Tampa Bay Rowdies play in St. Petersburg, but don’t forget to check out the real city in the area, Tampa. There is an awesome zoo, Busch Garden’s theme park, killer parks and a whole lot more. Honestly, just commute back and forth from Tampa to the game.

The Two-Headed Goat – The St. Petersburg Museum of History is home to a goat that had two heads and three pairs of legs. The creature actually lived for six weeks and now is stuffed and on display at the museum. While there, make sure to check out the Alligators & Oddities section where you can visit with the “Alligator-Girl” and civil-war era skulls. Creepy. 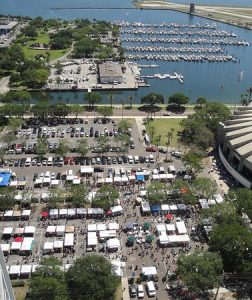 St. Petersburg Saturday Morning Market – Every Saturday from October to May, more than 10,000 people have been showing up to see what there is to eat and what they can buy IN THE PARKING LOT OF AL LANG STADIUM! That’s right, the home of the Rowdies is a flea-market 7 hours before game time! Nothing screams “we belong in MLS” more than hosting a fruit and veggie sale hours before kick off. Seriously though, if we want to tailgate and buy all of our food, it’s right there.

See Point 1 – Stay in Tampa – Check out this list of the top 25 attractions in St. Pete. A lot of Segway tours and disappointment.

The Pope Lick Trestle Bridge – The people of Louisville actually believe a murderous “Goat-Man” walks in the woods around the old school bridge just outside town. CST was told that it is a special pet of LCFC coach James O’Connor, but he isn’t even that messed up. Be careful as Louisville-natives claim, “the goat-man either uses hypnosis or some sort of siren voice to lure people onto the train tracks where they are then run down by passing locomotives.” – YUP this is Louisville. 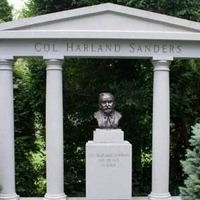 Colonel Sanders’ Grave – I was going to put in the Colonel Sanders’ wax figure here, but apparently, that place closed, so I guess we should check out the grave one of the most recognizable mascots in the entire world. His very own daughter honored the chicken man with a bust sculpted in his likeness. Something to note, the Colonel was placed in his coffin dressed in his iconic white suit and string bow tie, looking like his marketing representation even in death. We hear that Norm MacDonald and Reba McEntire sometimes makes guest appearances around the grave site.

Louisville Slugger Museum & Factory – Because LOUISVILLE PLAYS ON A BASEBALL FIELD. It’s good to visit the home of wooden baseball bats, more to remember that Louisville likes their baseball significantly more than their soccer team. The museum features baseball bats of Hall of Famer Hank Aaron, Shoeless Joe Jackson and the Cincy-Kid, Peter Edward Rose. Did I mention that Louisville plays on a baseball field, named after a bat-making company?

Bulleit Frontier Whiskey Experience – Louisville isn’t always full of s**t. They do make an awesome bourbon. Located just outside the city, the Stitzel-Weller Distillery is one of the true cathedrals of American whiskey, historic home to many of the industry’s iconic brands, innovators, and personalities. Bulleit whiskey is proud to call the facility home and it is open for tours on the weekends. Great place to stop after an FCC beatdown of Elsyie FC.

If You Have Time in Louisville: Mark’s Feed Store – A wonderful bbq chain based in Louisville. The name throws you off, but it’s awesome. Get the Buttermilk Pie at the end. 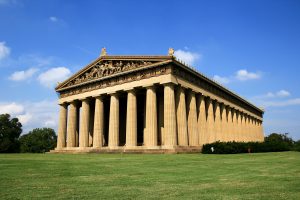 Parthenon Nashville – Created in 1897 and re-opened in 1990, this recreation of the iconic Athens structure now stands as the home of an art museum. The building was erected for 19th century for the Centennial Exposition in Tennessee and currently houses a 42-foot statue of the Greek goddess Athena. It is actually a fairly accurate depiction of the original ancient structure including several paintings on the facade. Let’s face it though, for history buffs like me, this tourist-trap seems kinda cool. 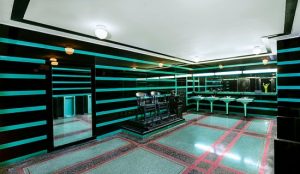 Hermitage Hotel Men’s Bathroom – Only the people of Tennessee could get really “jacked-up” for a bathroom. The lush bathroom is walled in gleaming lime-green-and-black leaded glass tiles, lime-green fixtures, terrazzo floor, and a gleaming two-seat shoeshine station. Hermitage Hotel now gladly welcomes women in to feast their eyes on the historic latrine. The hotel actually preserved its bathroom just so men and women can visit and admire the art-deco architecture. Really setting the bar high people.

Country Music Hall of Fame – I’m not the biggest honky-tonk fan out there, but I could be persuaded to check this out. The expanded museum features an entertainment district with galleries, theaters, and some interesting memorabilia. The HoF is home to Elvis’s solid gold Cadillac, the 1980 Pontiac Trans Am from Smokey and the Bandit II, and a bunch of other unique items.