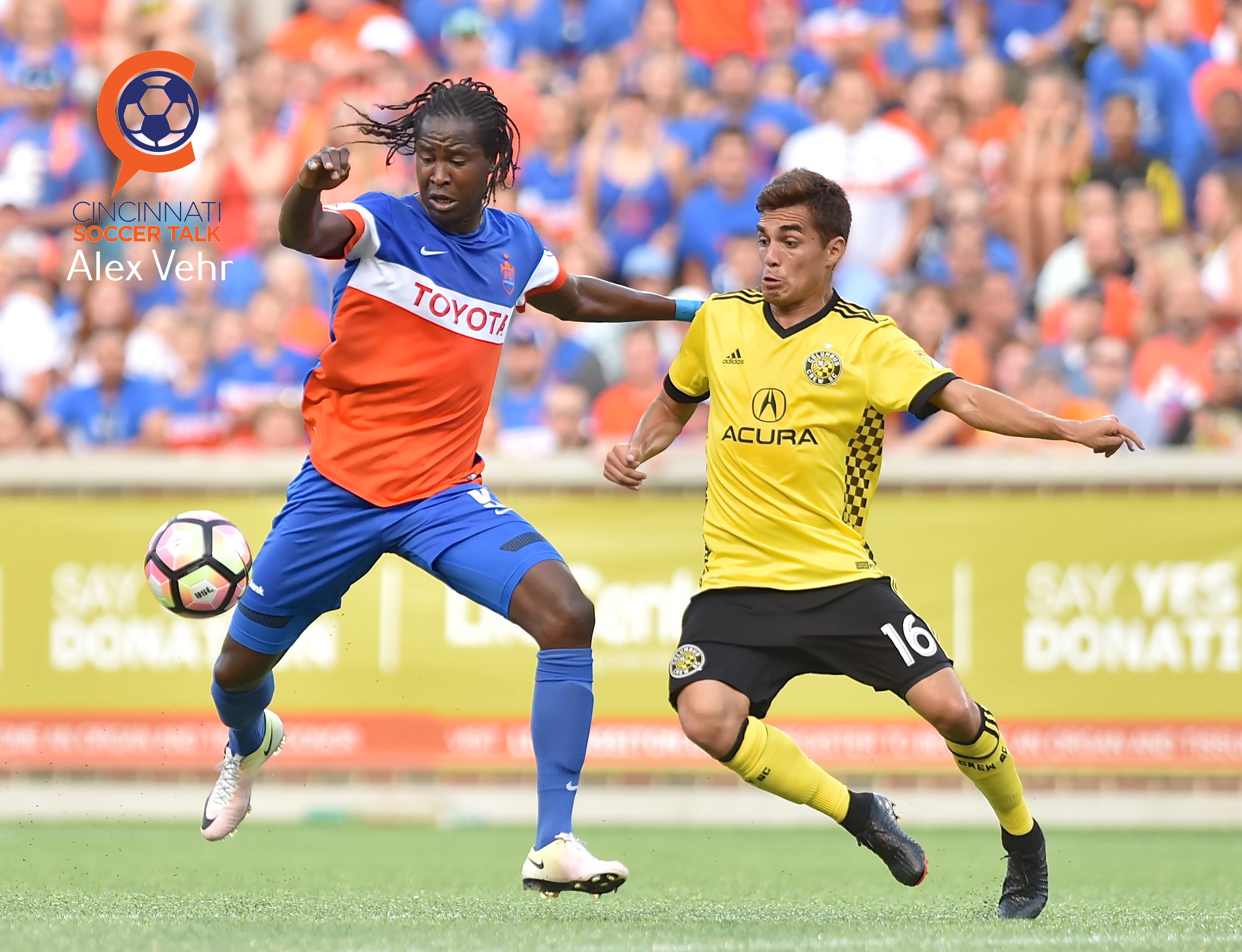 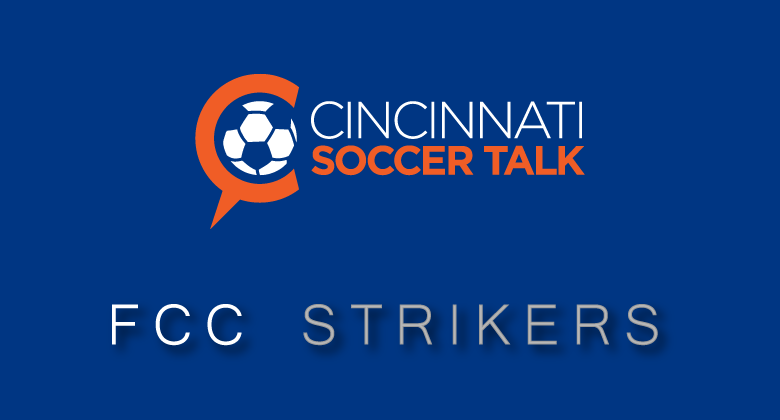 FC Cincinnati ended their 2017 season without succeeding on their bold ambition of 62 goals and a USL Championship. The club did, however, hit amazing heights in the 2017 US Open Cup coming off their successful inaugural season. 2016, was a great year for the club, but we at CST wanted to compare the performances of our players through a visual medium of the Orange and Blues’ first two seasons.

First up in an analysis of our FC Cincinnati striker corps. The inaugural season featured Sean “Ugo” Okoli as the main attacking piece with Omar Cummings and Andrew Wiedeman supporting the 2016 League MVP. Luke Spencer and Casey Townsend also logged minutes in an attacking role mainly coming off the bench to “ice” matches. While Wiedeman and Cummings may have spent time out on the wings, they always looked more comfortable going forward and are included in this comparison.

The Year Two group was full of surprises. Okoli, the clubs leading scorer left for NYCFC of Major League Soccer, and a new Head Coach brought in many new faces to suit up for FCC. Djiby Fall, the 2017 leading scorer, was the big offseason signing to replace Okoli. After some early season drama produced by Djiby and the inability to replace him, the club made a trade to acquire Danni König and brought Kyle Greig in on loan from Vancouver. Andrew Wiedeman again spent much time in an attacking role in 2017, whether he was high in a 3-5-2 or in a 4-3-3 or on the wing in a 4-4-2. This group did not log the aforementioned 62 goals but did beat the 2016 total from the striker group (27/30).

The graphic below compares the attacking contributions of each campaign. 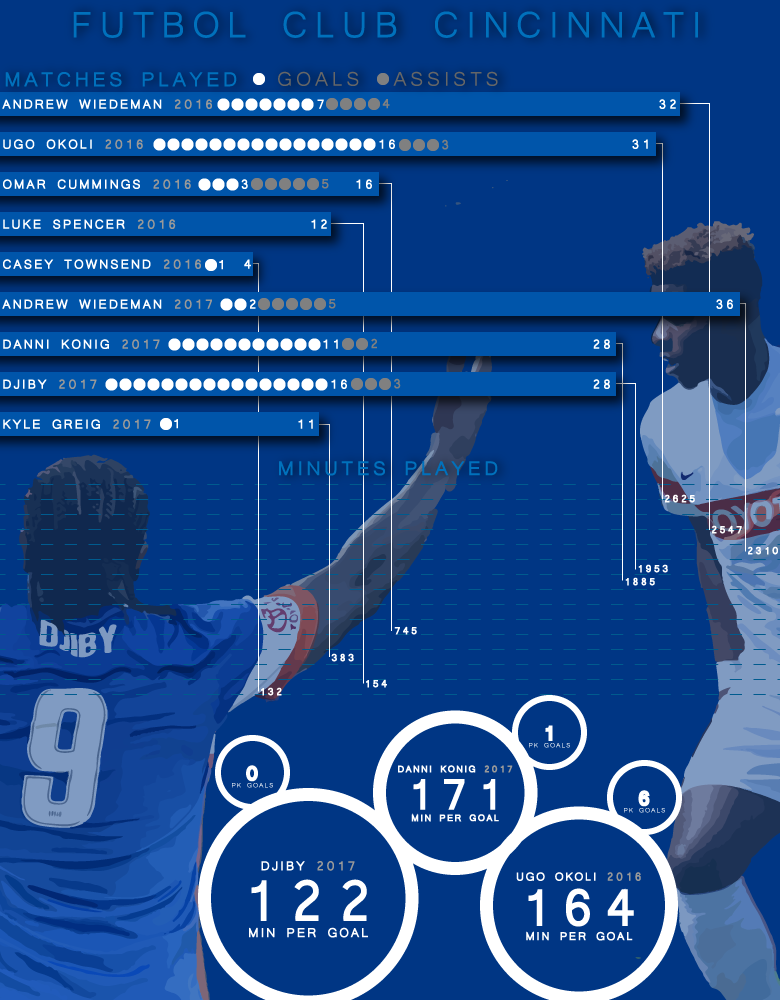 As you can see, the biggest improvement actually may have been Djiby Fall over Ugo Okoli. While most hold the NYCFC man in a higher regard, Djiby averaged a goal every 122 minutes vs. 164 compared to the Washington native. König wasn’t far behind Okoli at 171 minutes per goal but will need to improve on that in 2018. Where Djiby hurt FC Cincinnati was his lack of overall matches played. He and König both made 28 appearances in the Orange & Blue. His early season suspension and apparent lack of motivation for road matches may have cost FC Cincinnati points along their way to a 6th place finish in the regular season.

While Djiby may have created more goals in the run of play than Okoli, the 2016 USL MVP drew trips to the spot. Of Okoli’s 16 goals, six came from the penalty area. While all may not have been drawn by the striker, being the penalty taker for your team shows an enormous amount of confidence from the team and your coach. One is left to think why Djiby wasn’t given the few penalty opportunities in 2017. Confidence? Trust? Ability?

The emergence of Danni König may be one of the most important parts of the 2017 season. It was the first time FCC had a second true striker in the squad. While his 2017 stats show that he should probably not be the “leading man” in 2018, he sure gives Coach Koch the ability to take another high-risk, high-reward option up top similar to an unproven Okoli and gun-for-hire Djiby Fall. The most disappointing part of 2017 to 2016 was the drop in production of Andrew Wiedeman and loss of Omar Cummings. Wiedeman was positioned all around the pitch in 2017 and didn’t seem to be able to get into a rhythm. He remains unsigned to date but could be an attractive option to bring off the bench with his creative ability (5 assists).

Not to leave Kyle Greig out entirely, the Vancouver loanee flat out didn’t impress in the Orange & Blue. His loan looked to be something that could spark the FC Cincinnati offense, but he never seemed to gel with the squad. Compare the late addition of Townsend (1 goal in 132 minutes) vs. Grieg (1 goal in 383 minutes) this loan was flat out disappointing.

The common issue with both season comparisons is that neither ended up with hardware. Outside of this position group, FC Cincinnati accounted for 15 goals in 2016 and 19 in 2017. Will these numbers continue to increase in 2018? More importantly, will the midfield provide adequate chances for the strikers? Stay tuned for more “Look Back” pieces this offseason.

Tune into the latest Cincinnati Soccer Talk podcasts on Monday nights at 9 p.m. and look for our new podcast on your favorite podcast network each week!